The end of June raku event was a lot of fun and exciting. If you didn't see the post last week, you can check it out here. I focussed more on the process in that post, but now I will discuss the two bowls I made specifically with raku in mind. Both bowls are handbuilt in low-fire white clay. You can see the herringbone pattern left on the clay from the tea towel on which I rolled it. I like this effect (some tea towels have deeper patterns than others). On this, the larger bowl of my two, I pre-glazed areas in red and white and left other areas that I expected to go black in the "smoker". The black pattern on this was created with a feather, but I was disappointed that the "smoker" did not do its job - the lower area of the bowl should have been black. 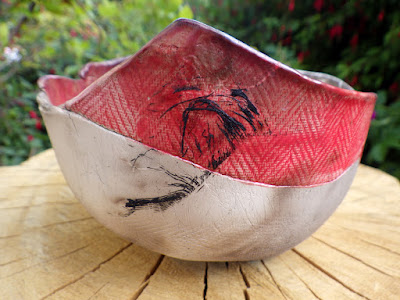 On the inside of the bowl I threw large clumps of my offspring's thick, straight hair. I also threw sugar, which burned and created the black spots. There was some crackling in the glaze that allowed some dark lines from the bowl's time in the "smoker". 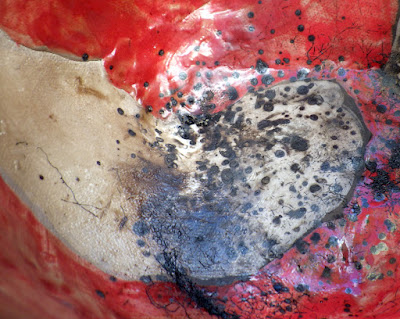 After a light scour with water and a scouring pad, the applied textures (sugar and hair) look more satisfying. 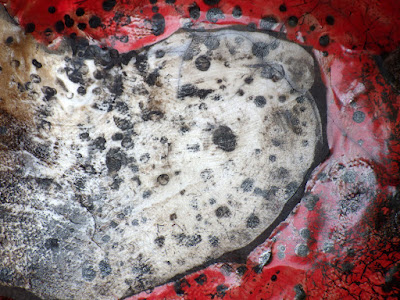 On the suggestion of another woman at the raku event, I painted on some India ink to areas that I wanted blacker. I was much happier with these results and it also made some of the crackling lines in the glazes more apparent. 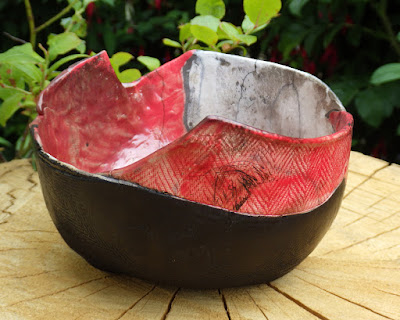 The smaller bowl had been pre-glazed with red, white, yellow, and clear areas of glaze, again leaving large areas that I expected to turn black in the "smoker". 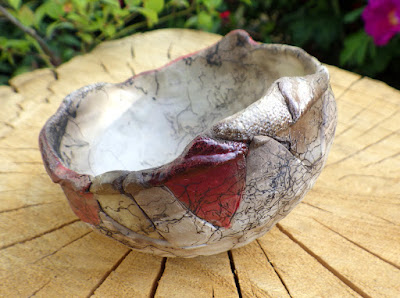 After I painted some India ink in areas that I wanted to be black, I was happier with the contrasts in the bowl's decoration. 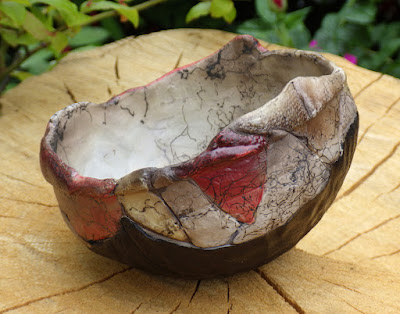 I used hair that I had been collecting from my hairbrush before the event in order to get these fine and squiggly lines. I had tried a few other techniques on this bowl (a mini "smoker" using pine needles, dried lavender) but they did not produce any results. The point of raku is to be open to experimentation and chance, but if the results can be altered by India ink (or anything else!) I am quite open to that too! 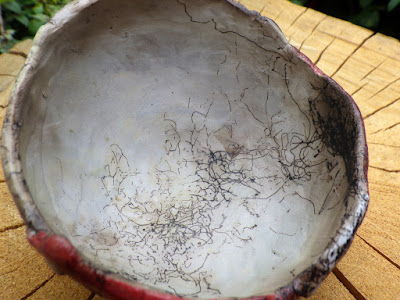 Posted by Lorraine Whelan at 10:11