The past few years my offspring has been trying to get me to commit to participating in Inktober - where, following prompts, one creates an ink drawing every day in October and posts it on instagram. While I have good reasons not to participate (too busy on other projects!) I decided that this year I would commit to participation. As I have started the residency in the studio at Signal Arts Centre, I have made doing the Inktober sketch part of my daily studio routine: inktober sketch, instagram/facebook post, self-portrait, bookbinding work, printmaking work. The bookbinding and printmaking work at this point is mostly preparation, so the first month of my residency can afford the extra item in my routine.

The prompt for Day 1 was "ring" and I did a fairly quickish sketch of my wedding ring on my hand, using a Staedtler green pen and some yellow ink. The ring was designed and created by an artist friend, after the theft of my original band (which was simple and cheap). 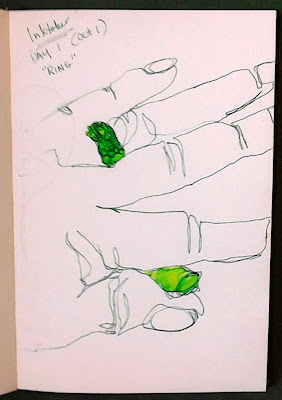 The prompt for Day 3 was "bait" and I simply took off my earrings because they made me think of fishing flies, though if I had have thought about it before I left the house, I may have chosen something more feathery. 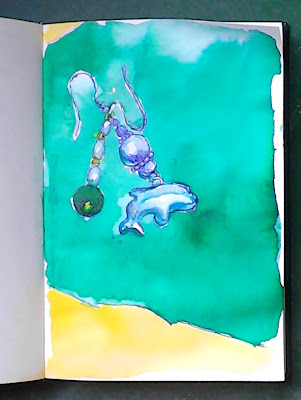 The prompt for Day 6 was "husky" and I chose to interpret this as vocal rather than the dog or a person. I thought of the beautiful, sexy, soulful, magnificent voice of Billie Holiday and then thought of her singing the amazing song "Strange Fruit". This song has been covered by many artists but Holiday's is the quintessential version that gives me goosebumps. 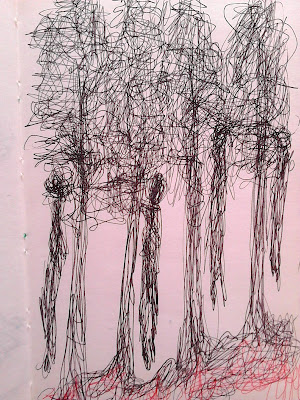 My residency morning routine has been (and no doubt will continue to be, for the month of October anyway) to follow the official Inktober prompt and create a sketch accordingly. After I have finished the sketch it is posted to my instagram account, which is linked to my facebook page. The point of the exercise for me is to actually SAY something, tell a story, reveal a thought or memory. This is most obvious perhaps in Day 7 where the prompt was "enchanted". Here is my sketch: 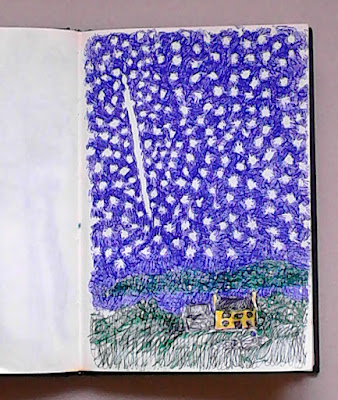 and this is what I said about it: Day 7. Enchanted. By the cosmos mostly. Natural phenomena. And deep time. In 1981 I was nearly blinded watching 2 suns rise, an atmospheric illusion, above Lake Ontario. In 1990 I picked out Jupiter and 4 of its moons for the first time from a rooftop in Dublin. In the winter of 1992 the Aurora undulated like a huge red curtain over the Ottawa River. From a field outside Port Magee, in Southwest Kerry, in 1995, I saw Comet Hyakutake hanging like a sword in a spectacularly clear, star studded sky.

I am enjoying following this routine and will continue to do it this year. I won't commit to next October till I see what's happening with my other work.
Posted by Lorraine Whelan at 09:16