On my last gorgeous day in Venice, I visited the Peggy Guggenheim Collection. It was fantastic! It was a lovely building with intimate galleries and a terrace overlooking the Grand Canal. The collection was superb - I felt like I was taking a stroll through the history of early to mid 20th century art, as I recognised a good number of the artworks from art school textbooks.

Guggenheim was very interested in collecting Cubist and Surrealist works when she first started collecting, so there are a number of works by Picasso, Braque, Giacometti, Magritte, Duchamp, Gorki, Richier and others. Indeed, Duchamp was one of her advisors at the beginnings of her project in London. This Picasso is from 1937. 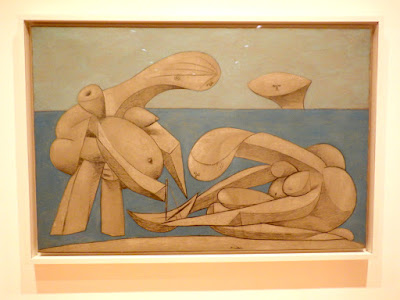 I loved seeing this scrumptious painting by Grace Hartigan, whose work I did not remember learning about in art history classes, but who was apparently just as well-known in the New York art scene of the 1940s and 1950s as all the male artists who were written about later in texts. I am certainly very aware of how female artists (scientists, thinkers, etc.) seem to have been erased from the collective memory, but are now suddenly reappearing (reclamation!) as having been there all along. 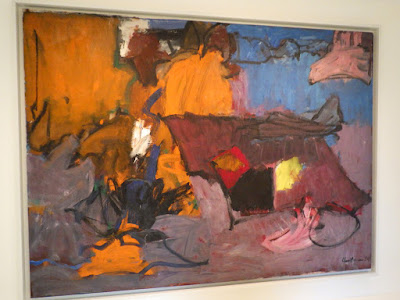 Another woman artist whose work with which I was unfamiliar, is Lynn Chadwick. This small sculpture from 1955 begs to be a large, public sculpture but I really enjoyed the lighting which created defined shadows on the wall behind it. 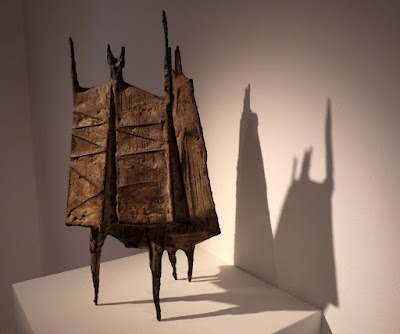 It was also a joy to enter a room and see Constantin Brancusi's Bird in Space in the flesh (so to speak). A staple of modern art histoy, I have seen reproductions of this work so many times in books. 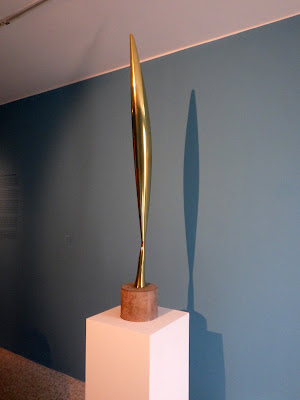 I attended the Gallery School on Saturday mornings when a teenager, after receiving a scholarship from the Art Gallery of Ontario, and one of the first things the class was shown was a short film about Alexander Calder, as an introduction to modern art and methods of a modern master. So it is always a joy for me to see Calder's work. This piece is unusual from other works of his, that I have seen, in that it is two dimensional and wall-mounted, as opposed to mobile and free-floating. 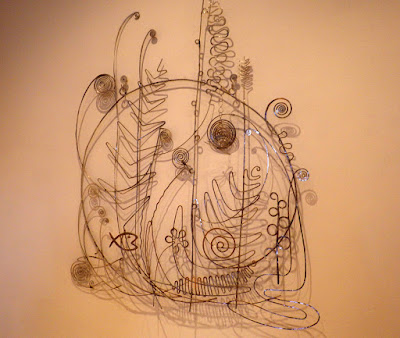 There were several large Jackson Pollock paintings, which are never a surprise to see in a major collection, but always a delight. 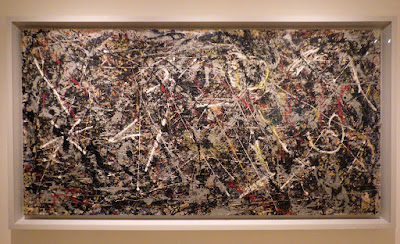 While there was minimal and geometric work by Vladimir Malevich, an artist whose paintings I have always liked, in the same room I found myself attracted to this piece, by another woman artist of whom I had never heard. The work of Irene Rice Pereira, while being two dimensional in form, appears three dimensional through layering and reflective surfaces. 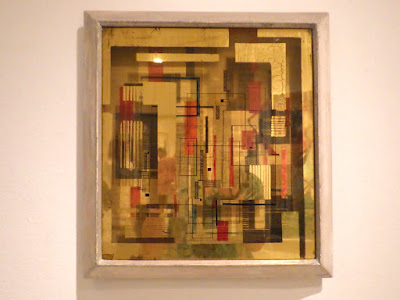 I had to do a double-take when I saw the didactic for this work as I am familiar with the writing of English playwright David Hare but have never come across his American sculptor namesake before. Once again I found myself as much enamoured by the lighting and well-defined shadows as I was by the artwork. 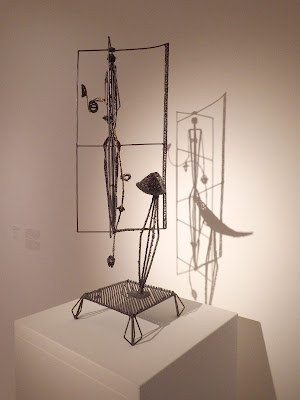 The large 2017 sculpture near the café by Joanna Migdal gives proof that this collection continues to grow. Peggy Guggenheim bequeathed her collection in Venice to the Guggenheim Foundation and, though it is a magnificent historic collection, it is not static. 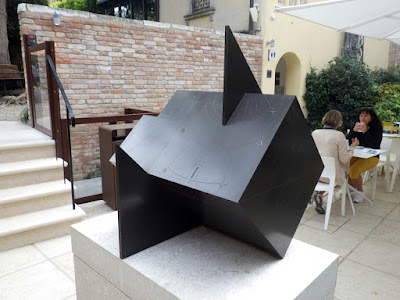 Posted by Lorraine Whelan at 18:01