After the Big Egg Hunt artists event last week, James and I walked up to the Hugh Lane Gallery in Dublin in order to see the Francis Bacon Studio, which had been meticulously catalogued, taken apart in London and recreated in its chaotic entirety in the gallery in Dublin.  It is a fabulous exhibit, with accompanying interactive computer information as well as a room full of Bacon's research material and photos, so one really gets a sense of Bacon's working process. 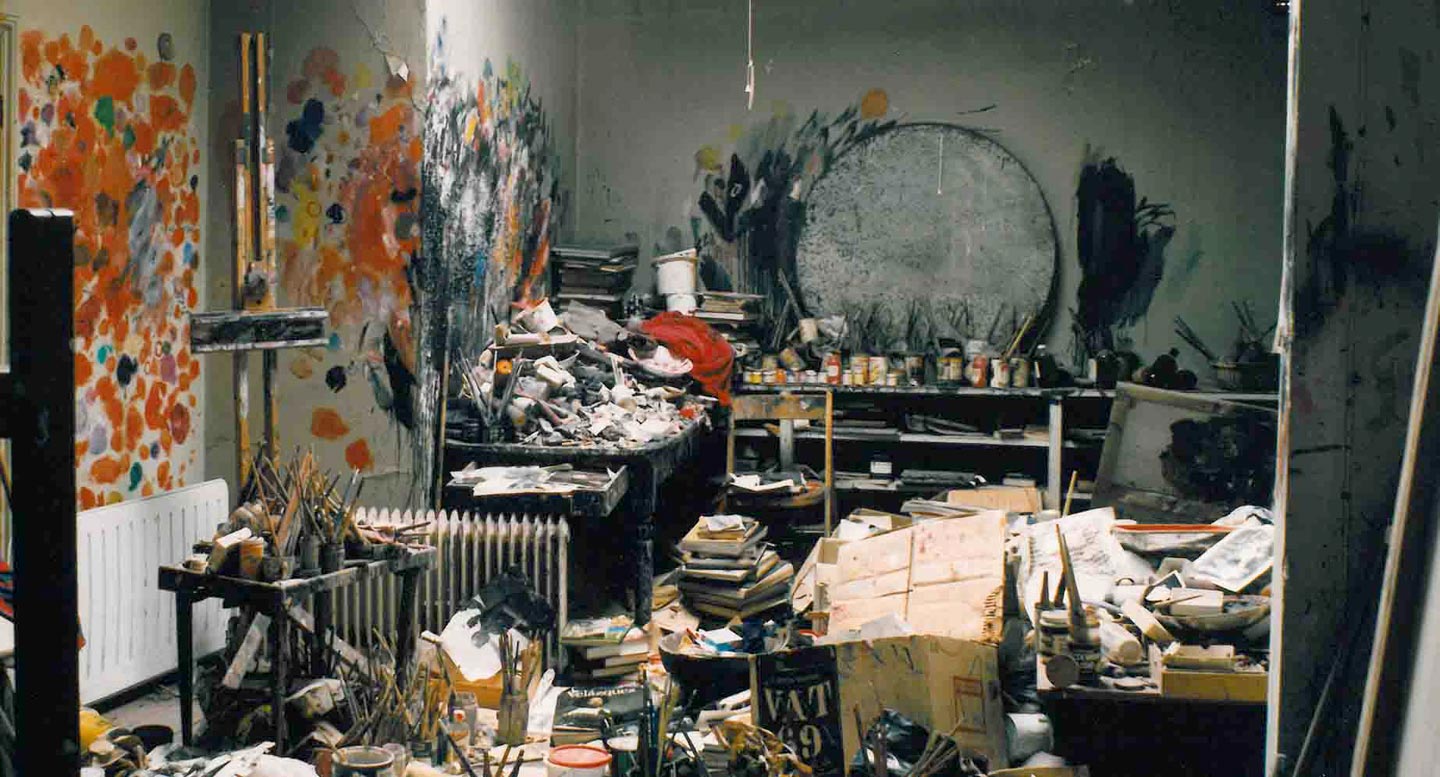 On the way along the quays, I came across this bus signage which I though was totally surreal. 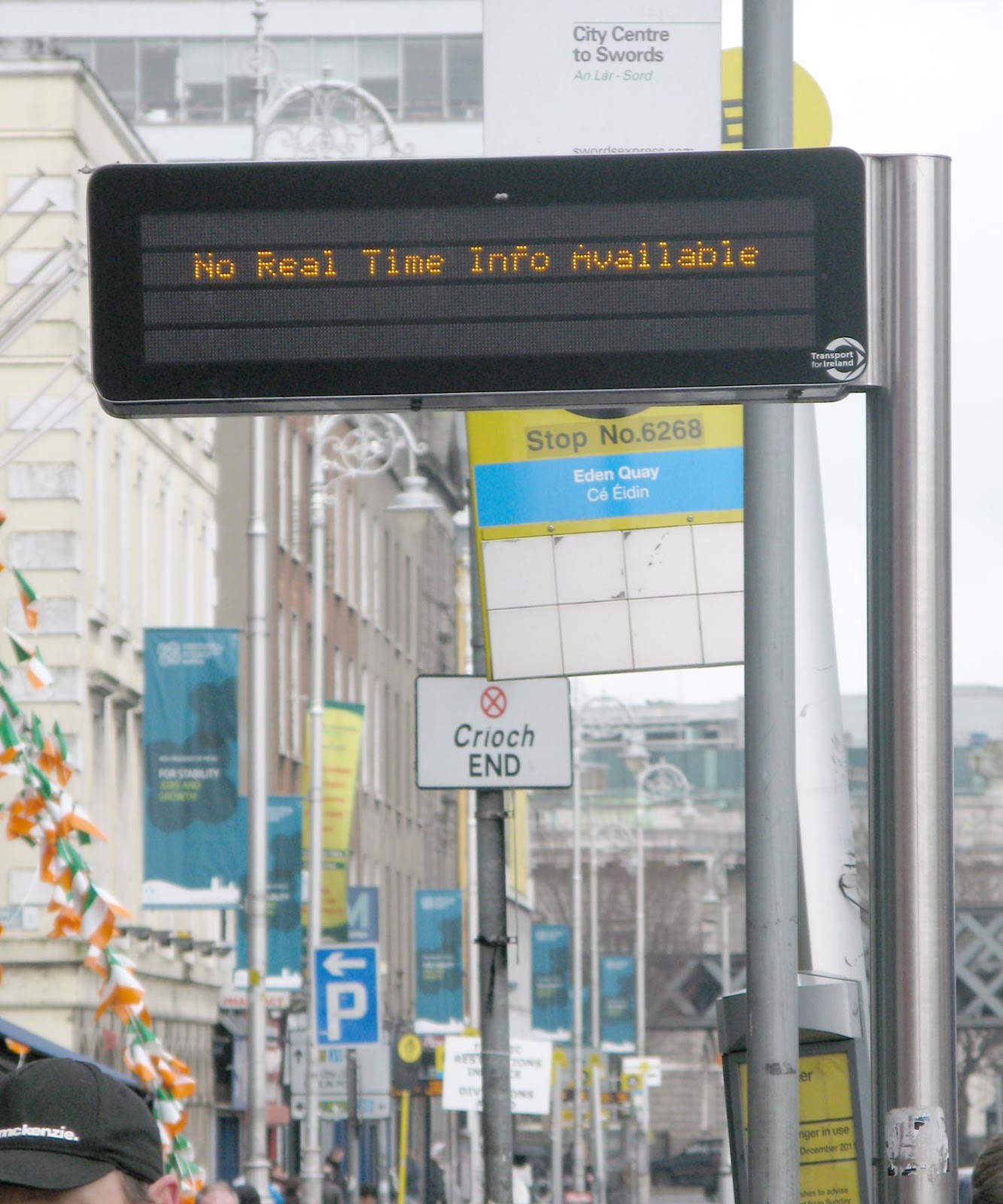 Last night the group exhibitions "ReMade" and "Gather" opened at the TuShanWan Art Museum in Shanghai. They are part of Irish Wave 4, an annual event of exhibitions from Irish based artists which take place in Beijing and Shanghai.  This is a photo of my work "Pastures Green" taken in the cow shed at Fernhill Gardens, Dublin in 1997.  The two cow curtains visible in the foreground are now being exhibited in Shanghai. 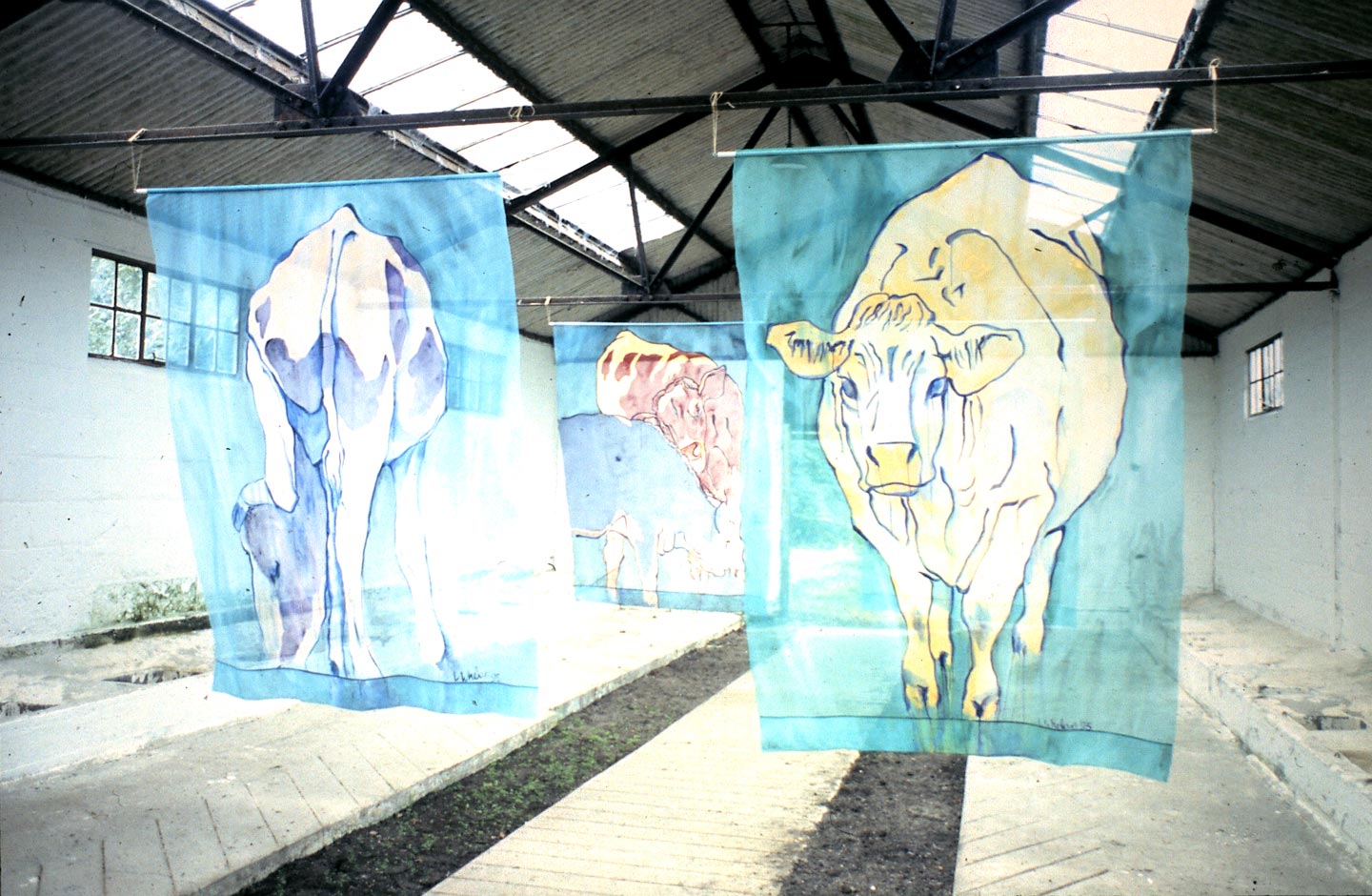 Posted by Lorraine Whelan at 12:50 No comments:

This morning I was in Dublin for the Big Egg Hunt artist event and photocall. It was great to see all the eggs gathered in one basket (so to speak).  Impossible though to take a picture to show all 100 in the T-space of the building, plus the side gallery. Here is mine, Wild Roses, in the foreground, Lynda Cookson's Aspirations in the middle ground, and James's Hilbert Curve just beyond (then the others become a colourful blur). A view of the other row of eggs (the floor plan was like a big T -- two rows going down the stem and then bunches at either side of the entrance.  There was also a gallery with the 30 something eggs which will be auctioned live on Saturday night at the gala event. 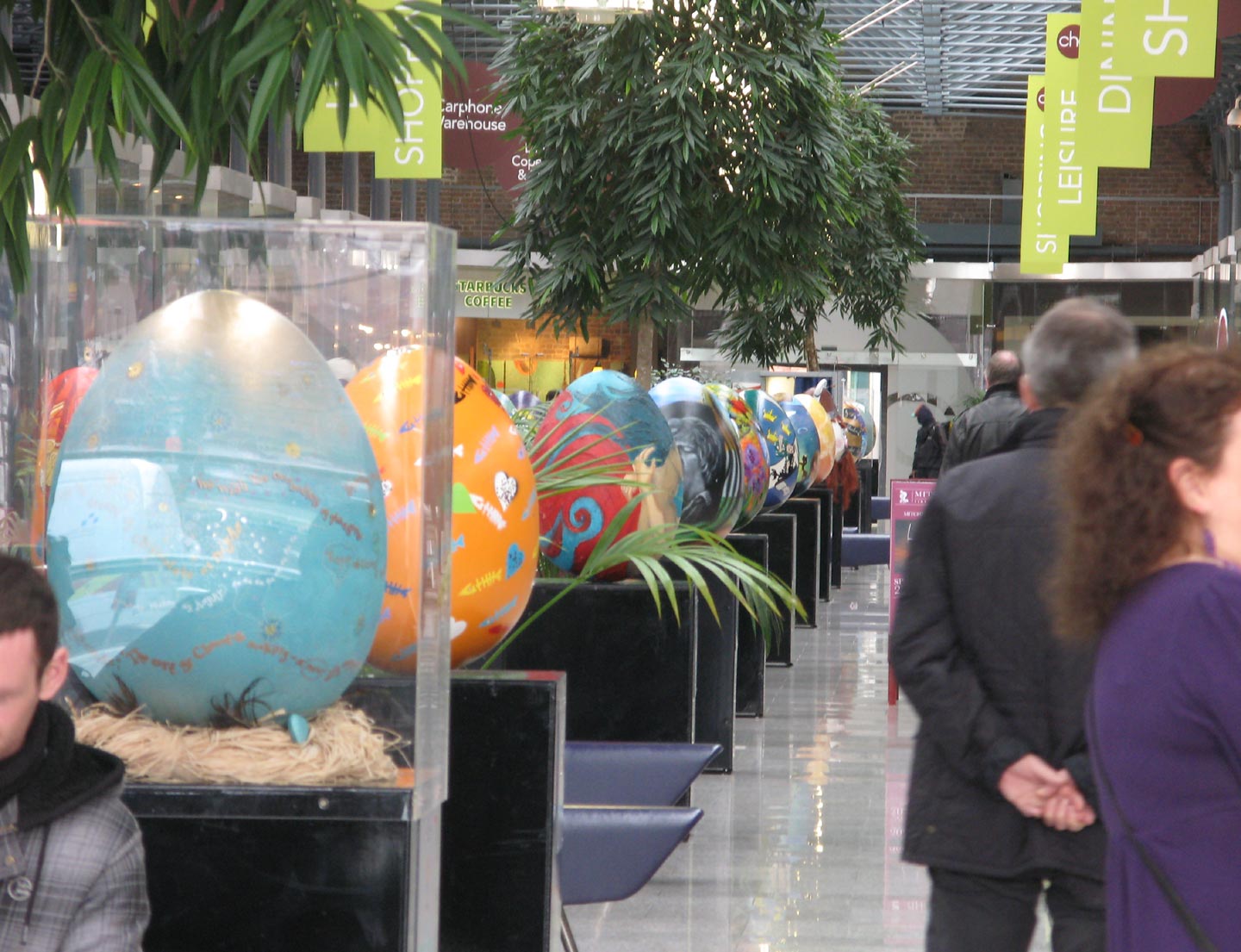 And I was giving my egg a big hug goodbye, as today will probably be the last time I see it.  There have been bidders, so it will go to someone at the end of March. 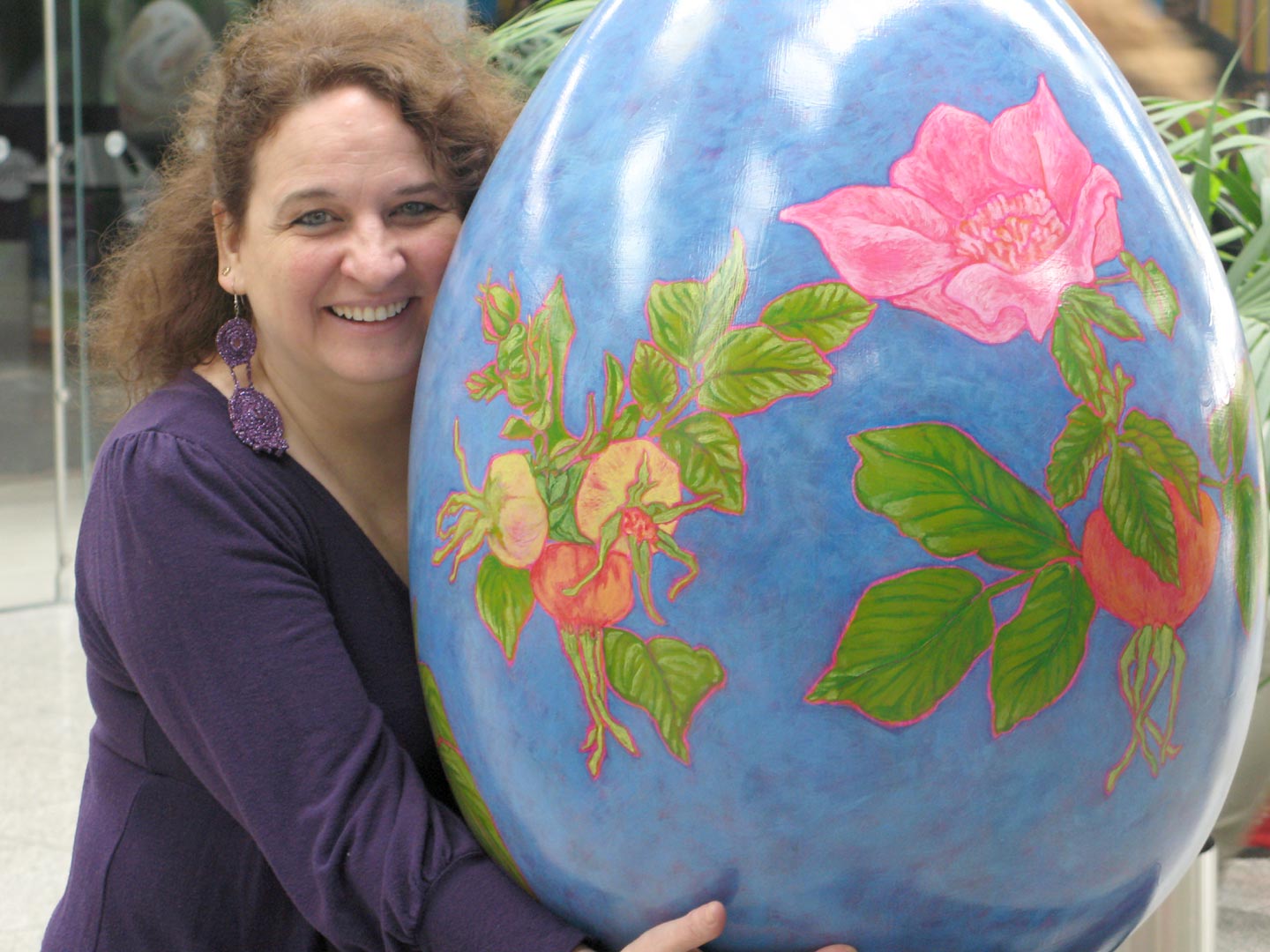 Posted by Lorraine Whelan at 22:29 No comments: 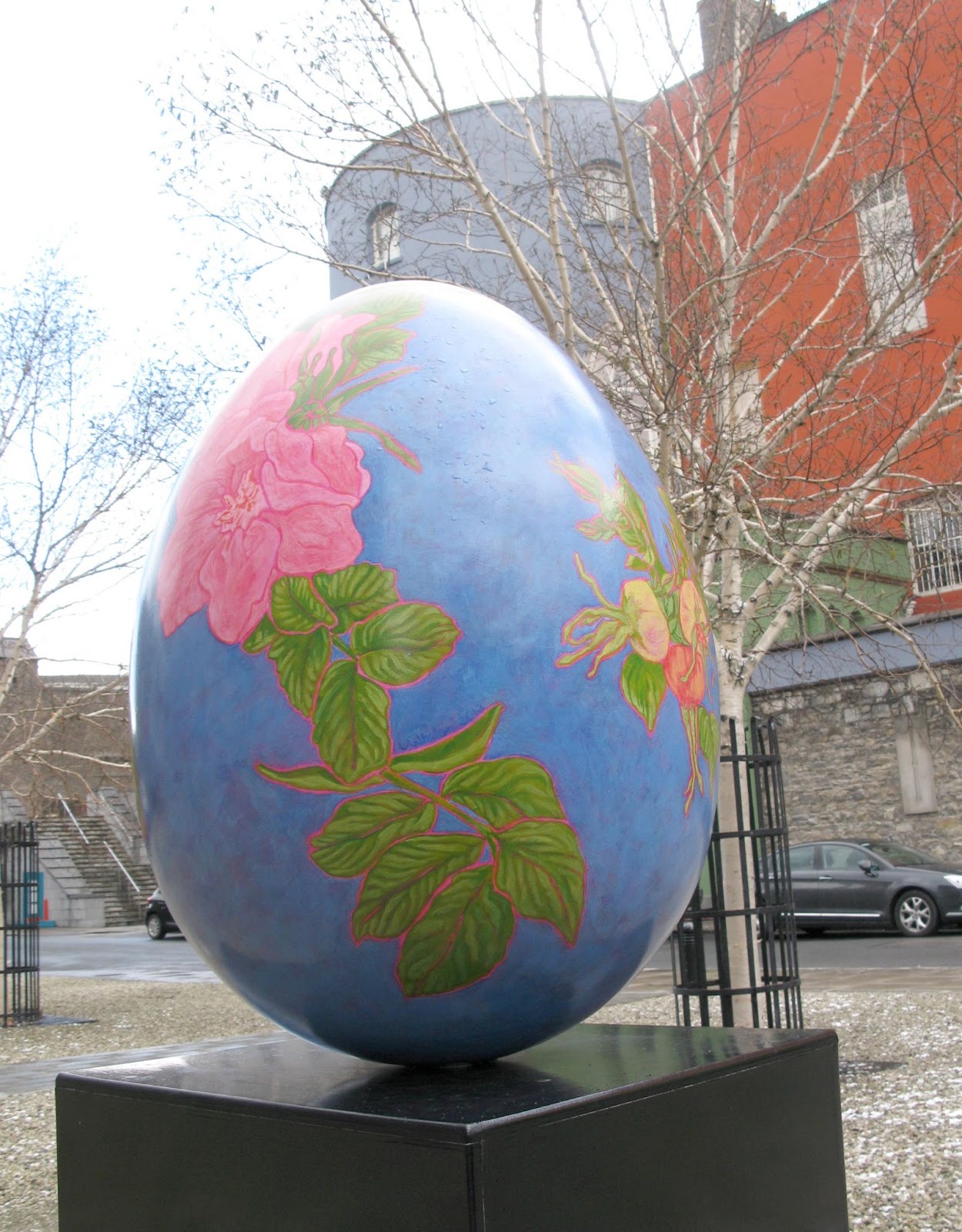 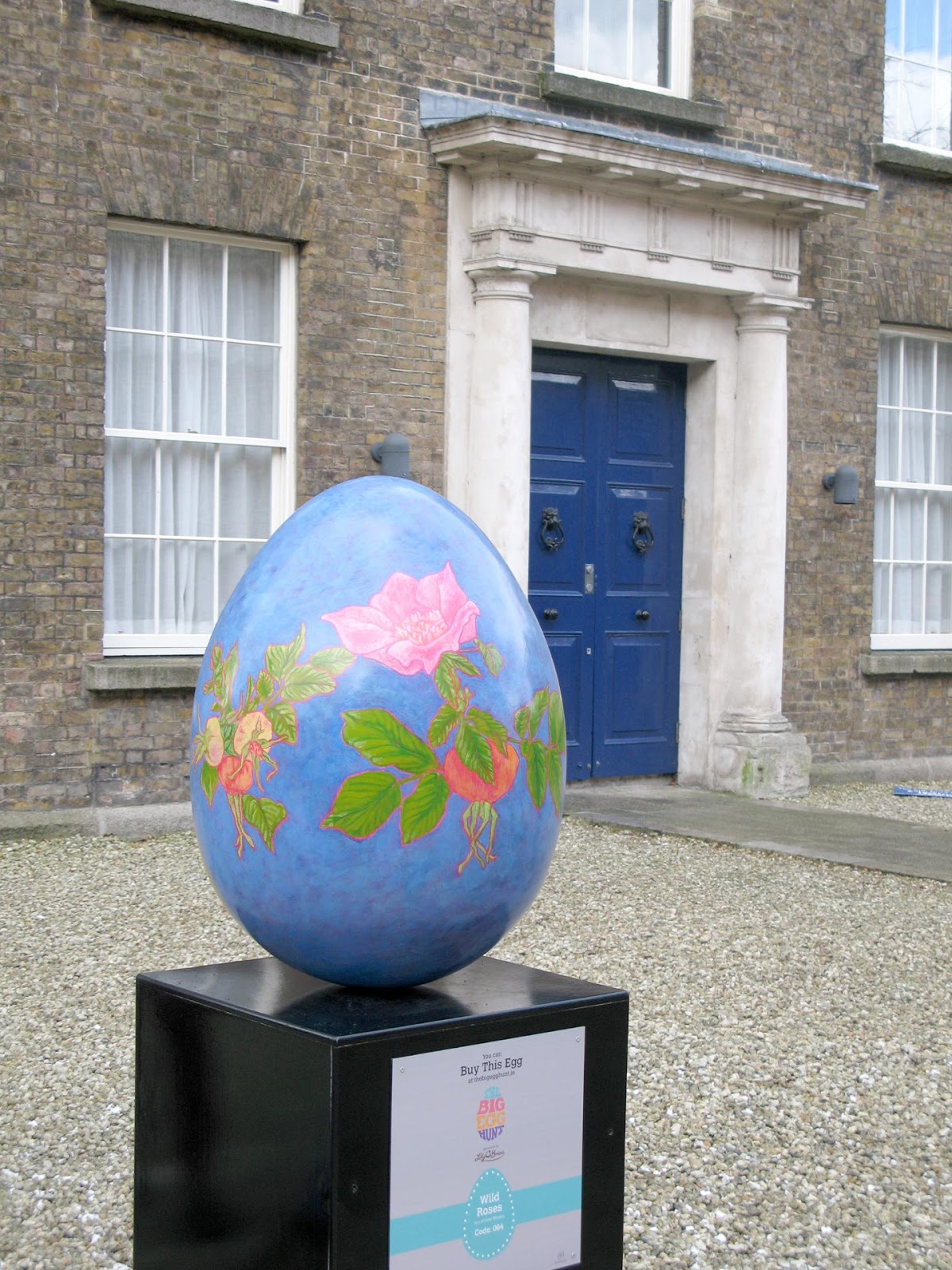 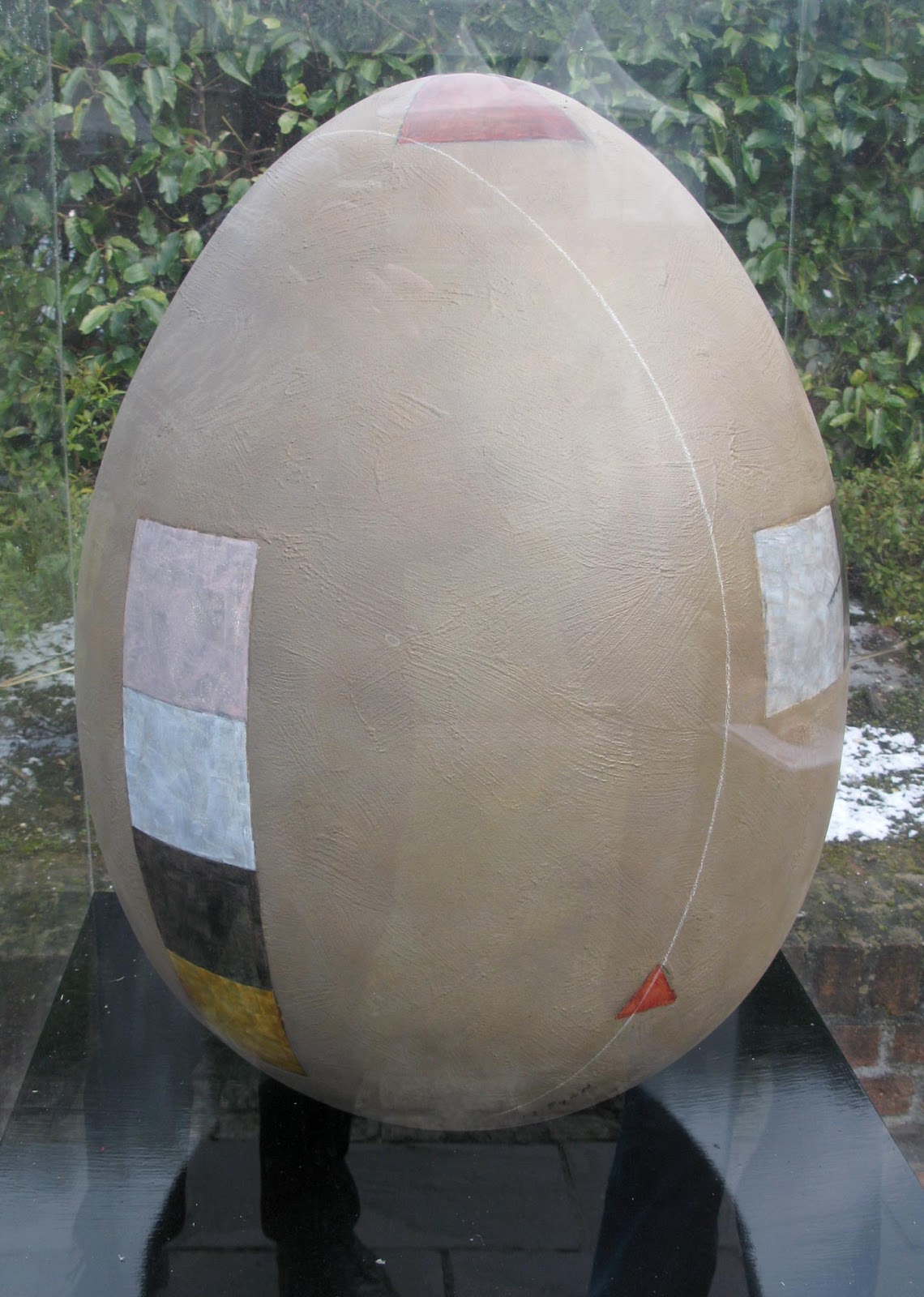 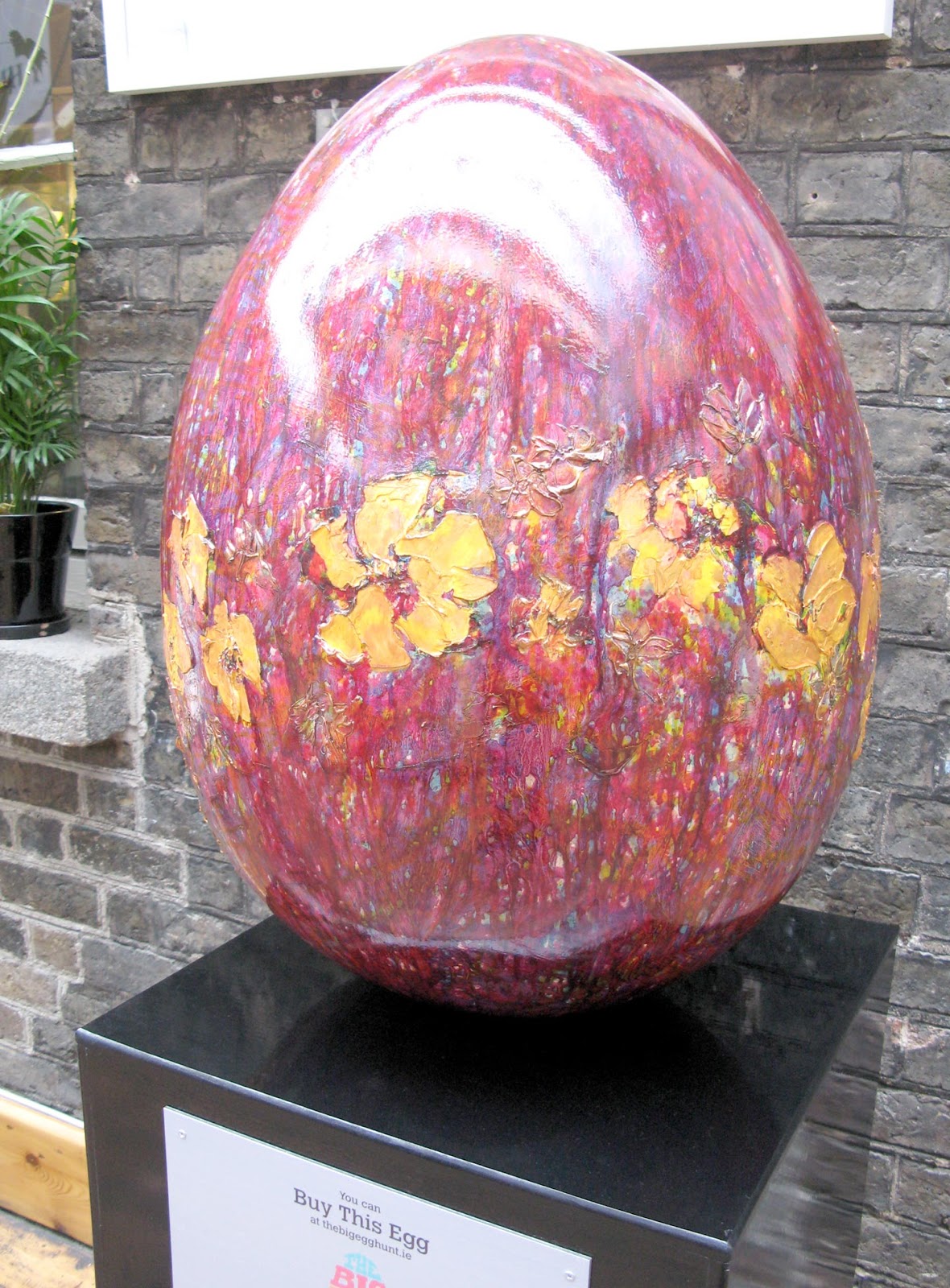 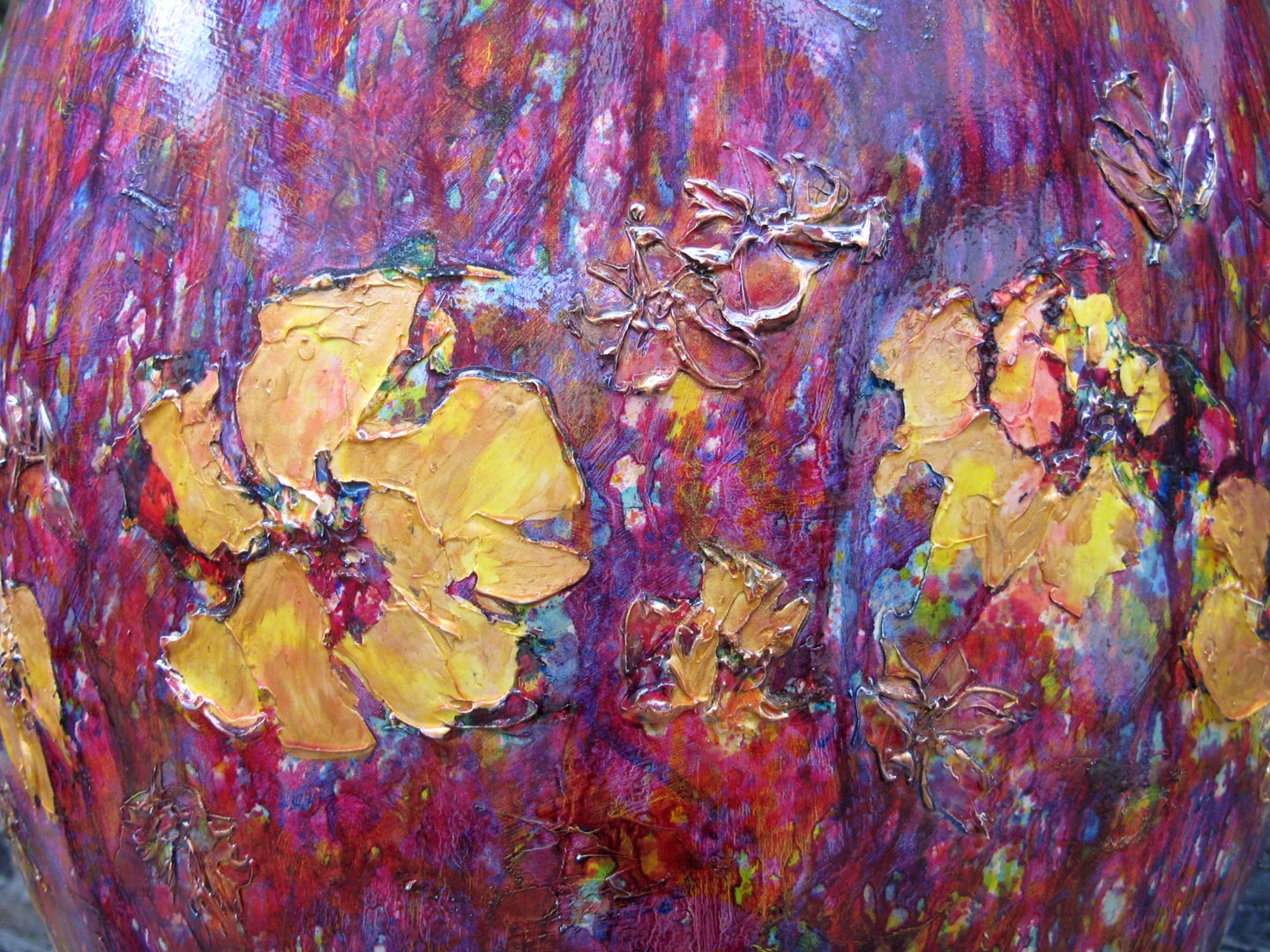 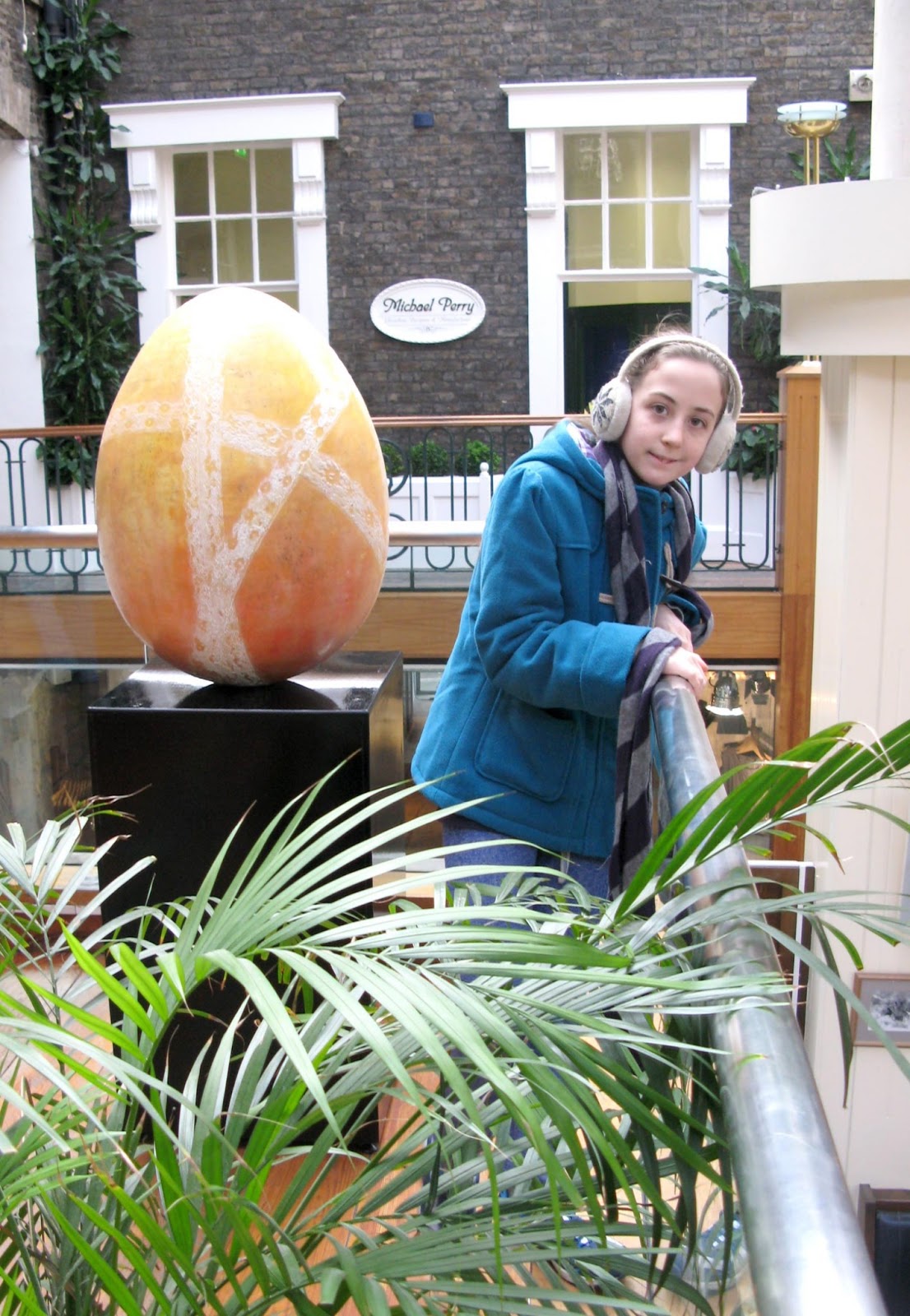 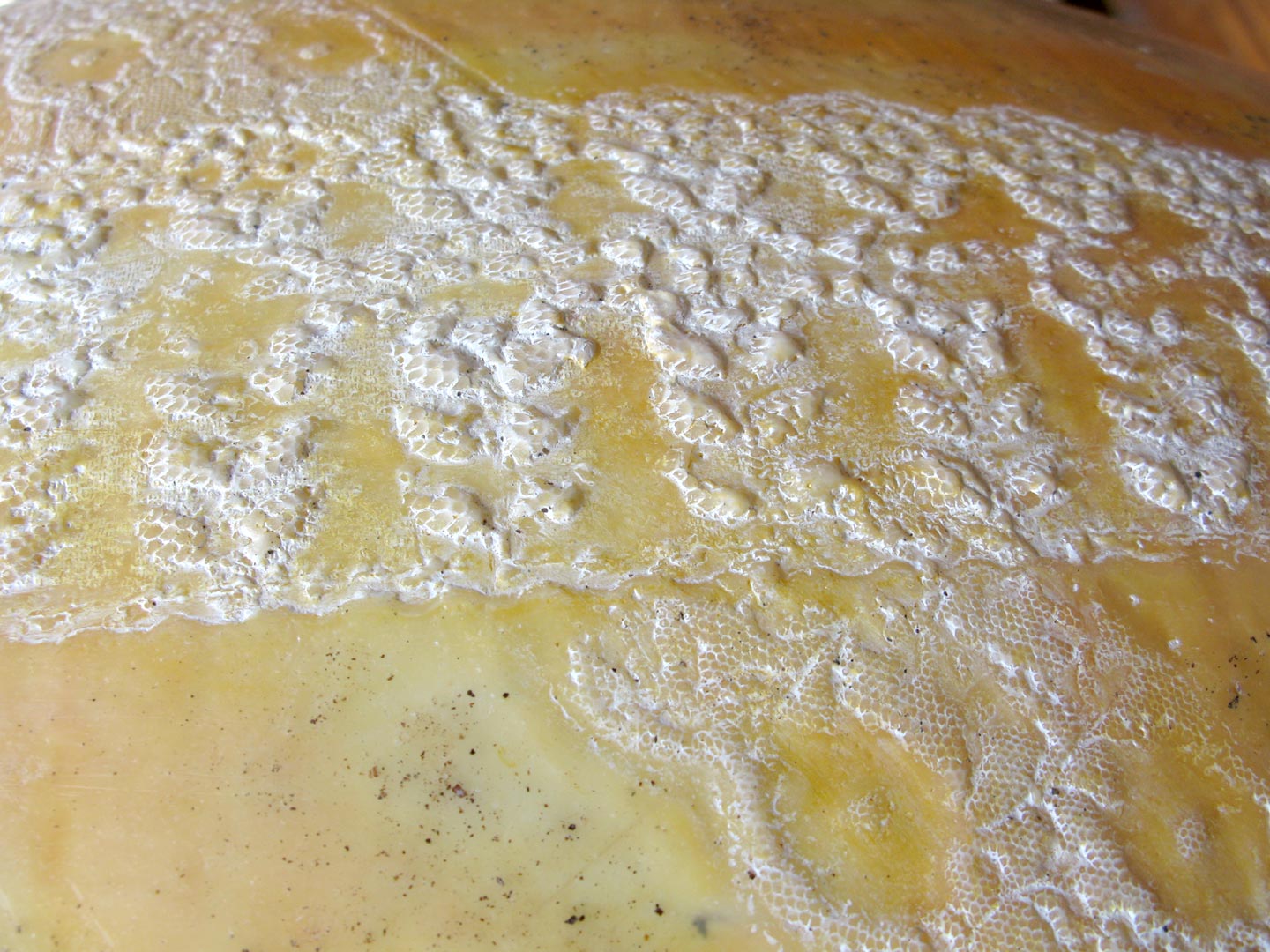 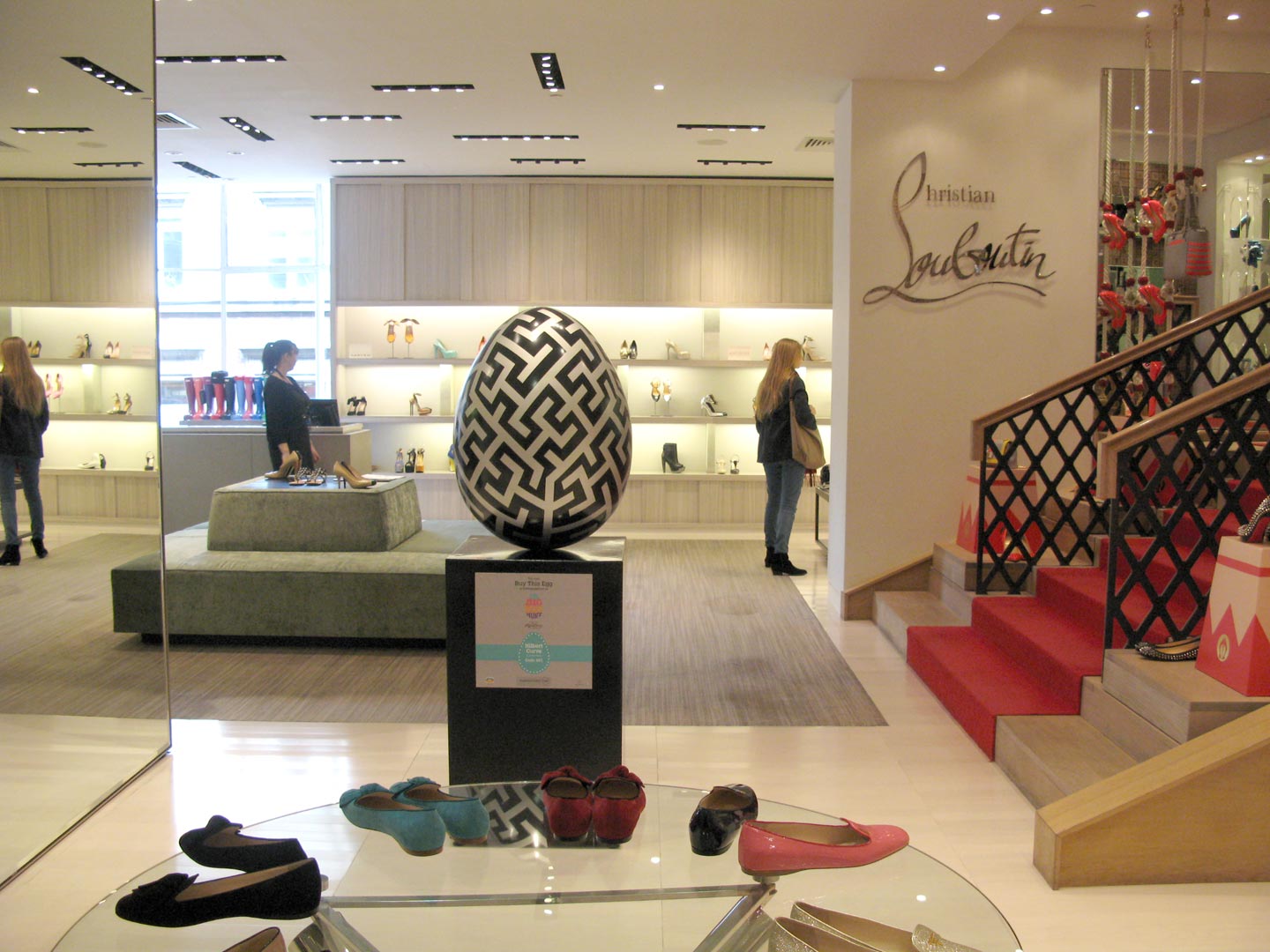 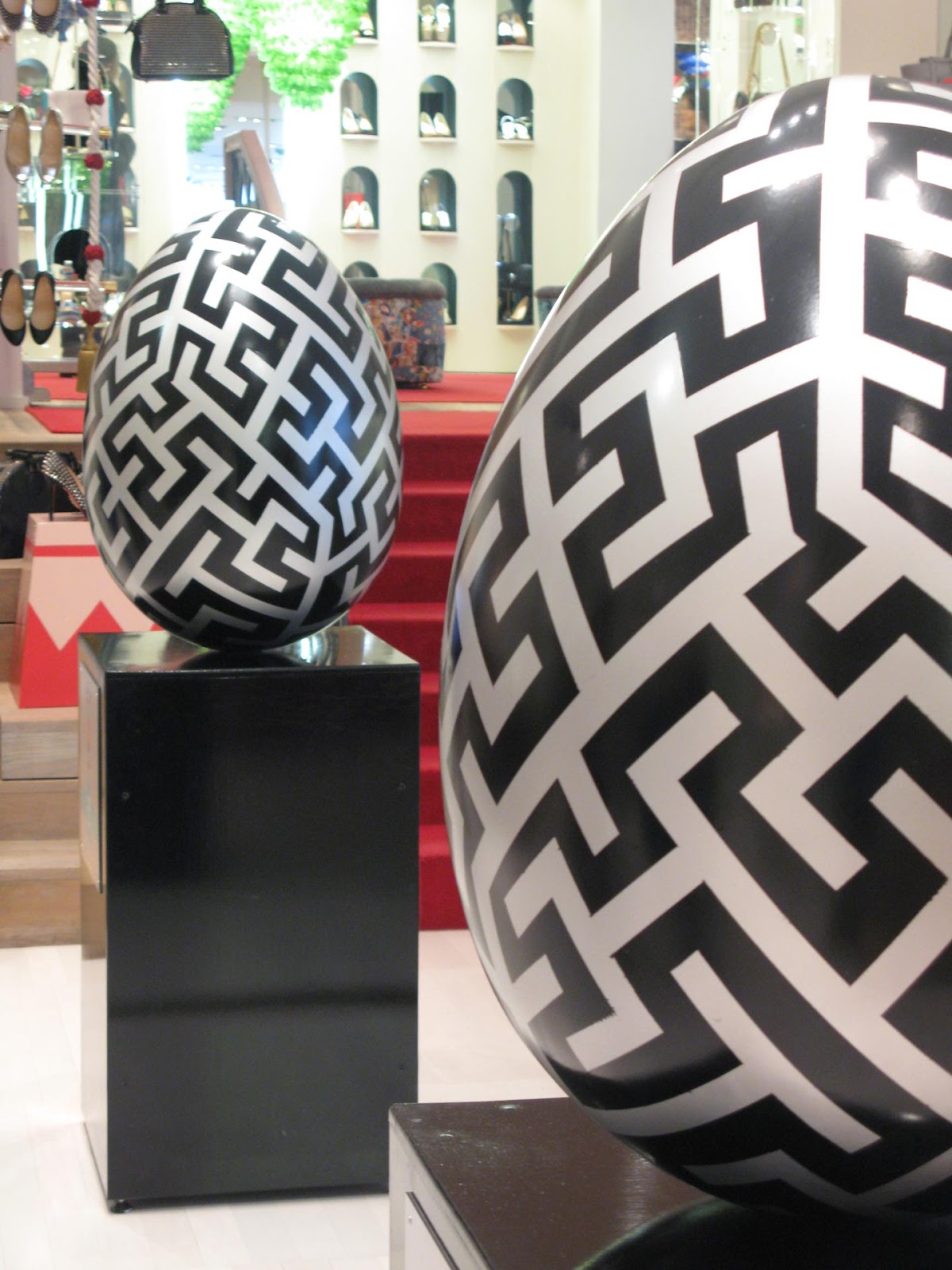 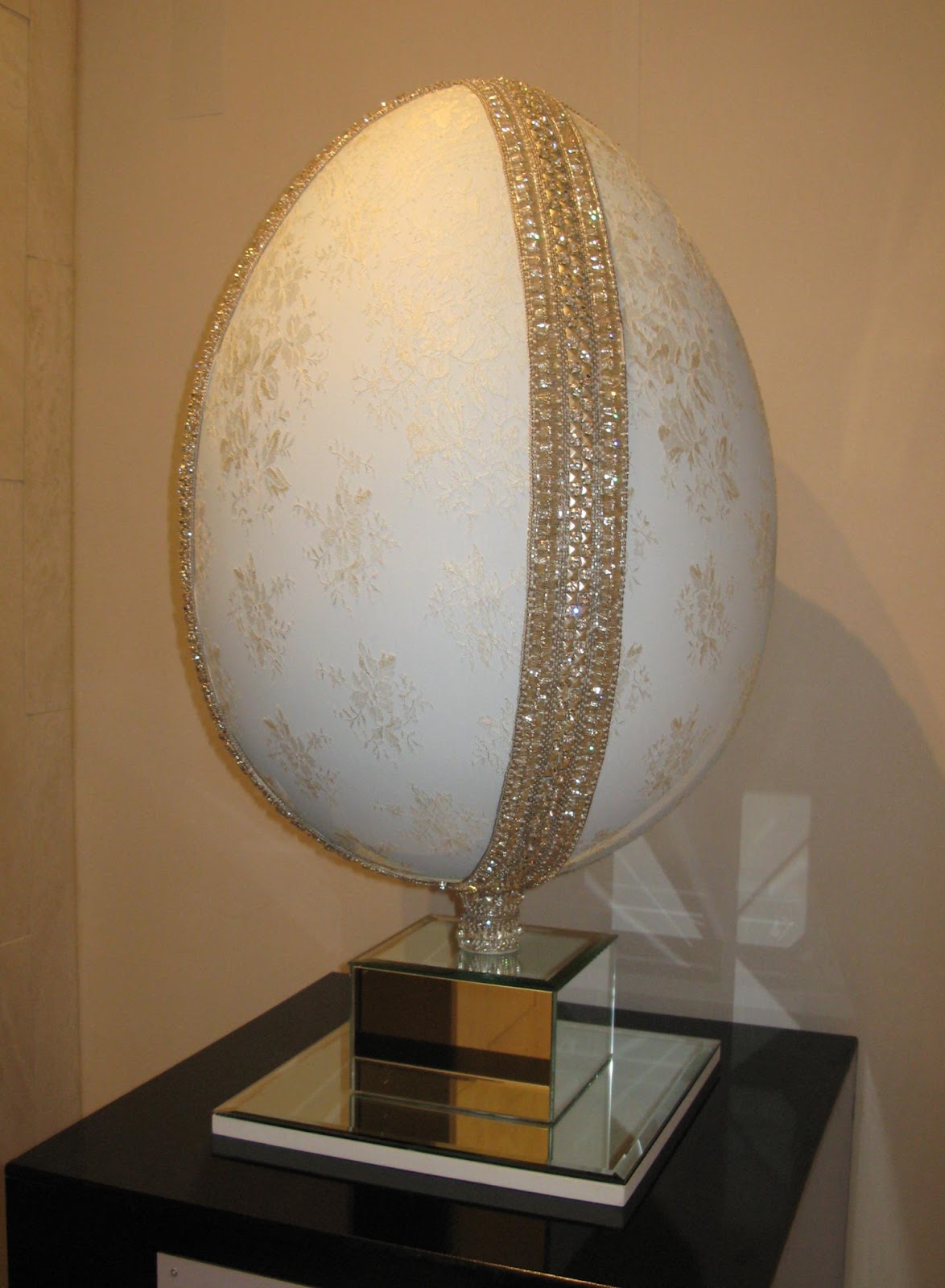 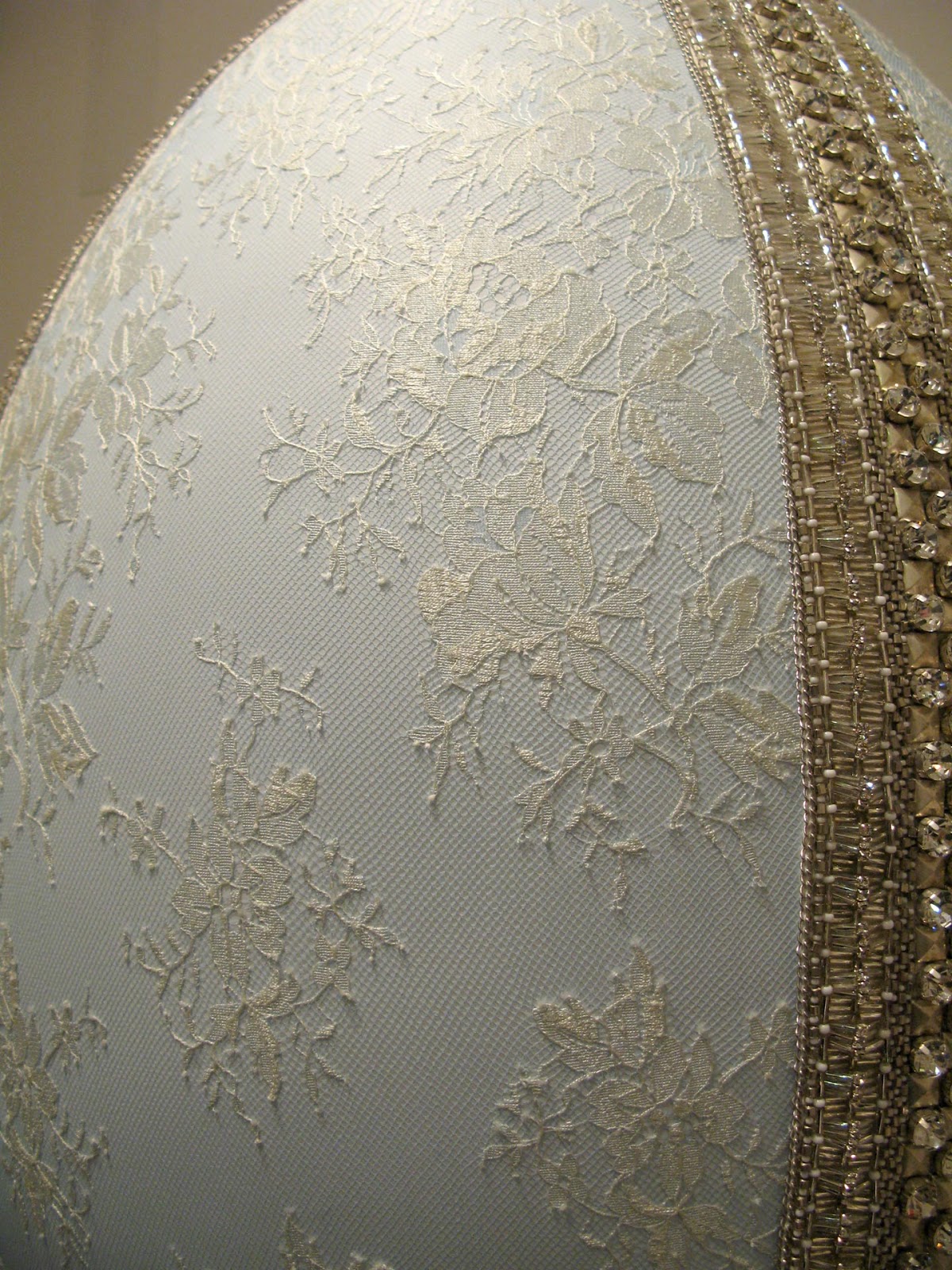 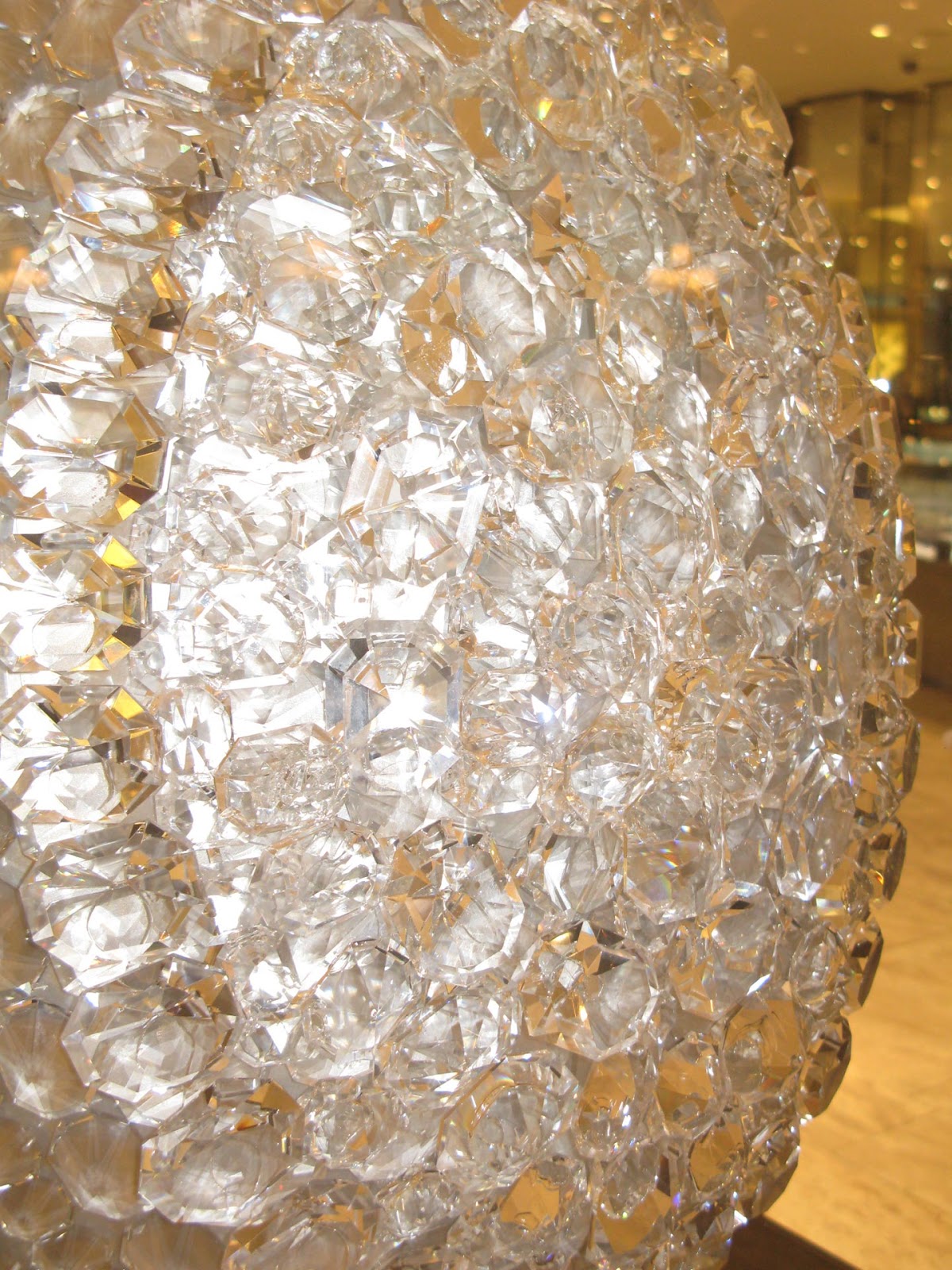 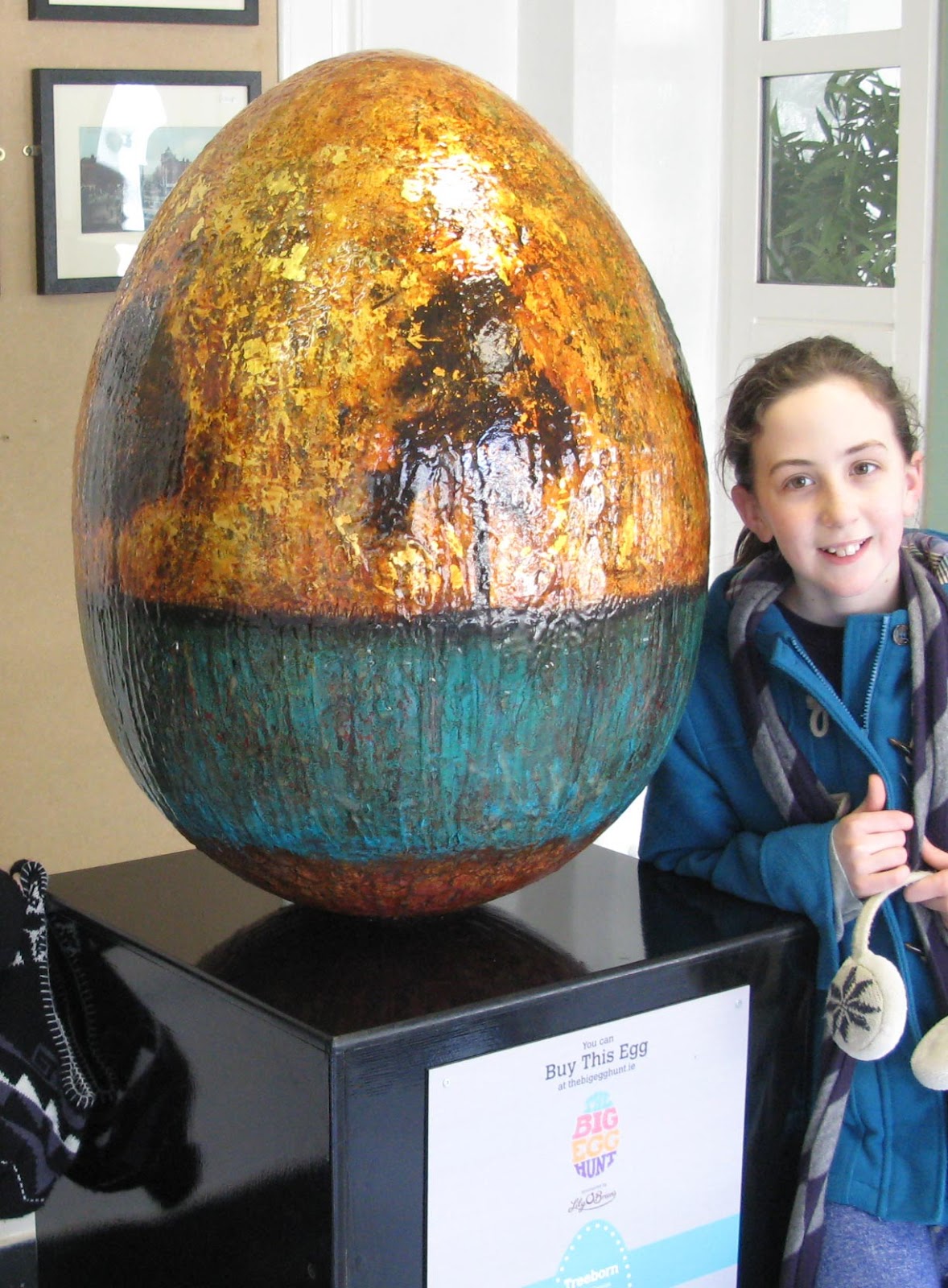 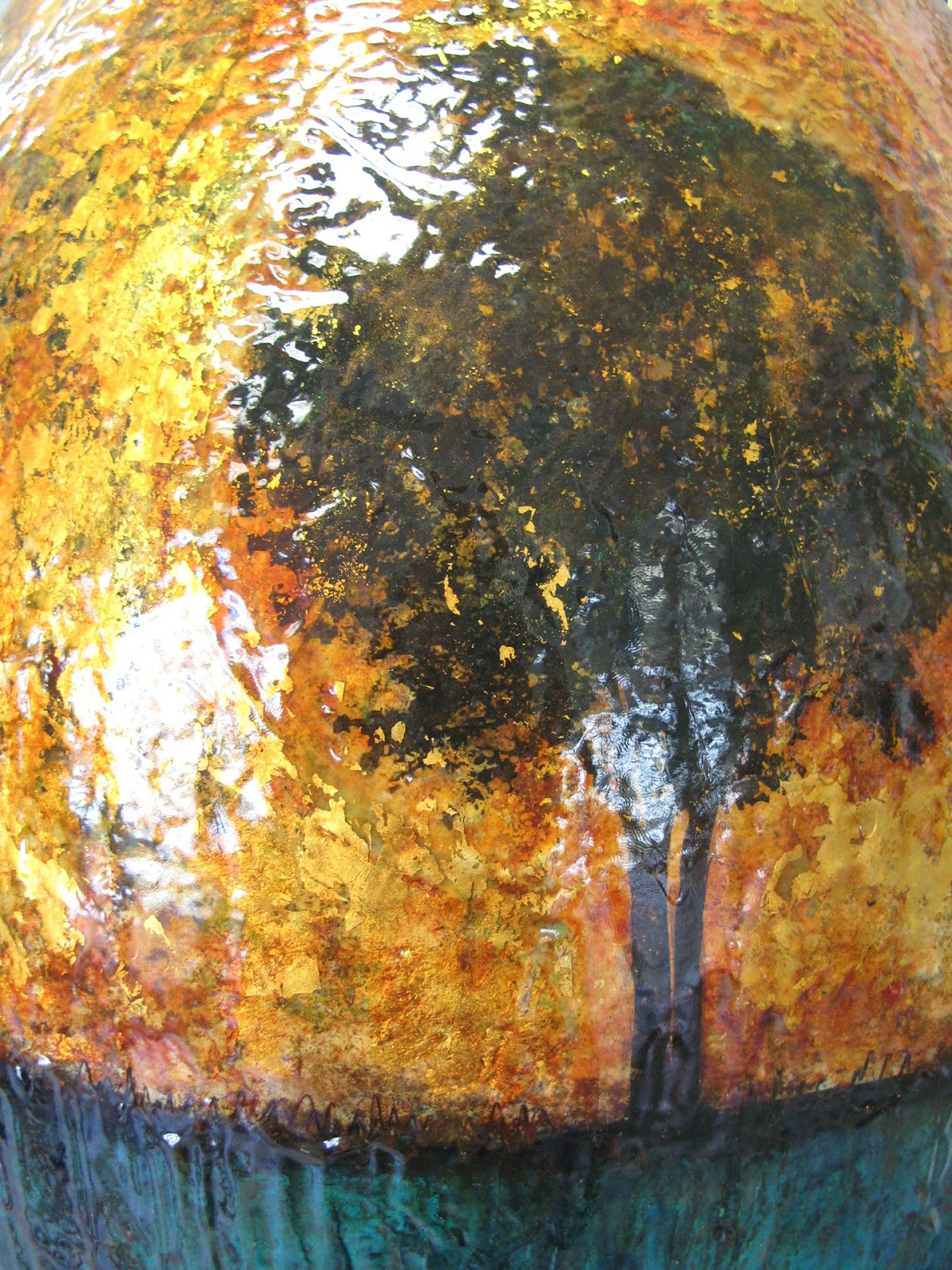 Posted by Lorraine Whelan at 18:05 No comments:

On Sunday we went to Marlay Park after breakfast, to find some of the eggs in The Big Egg Hunt Dublin.  Reportedly there were six there, but we found 7.  This one, Eggscuse the Mess by Frank O'Dea, I particularly like, so had a photo opp! 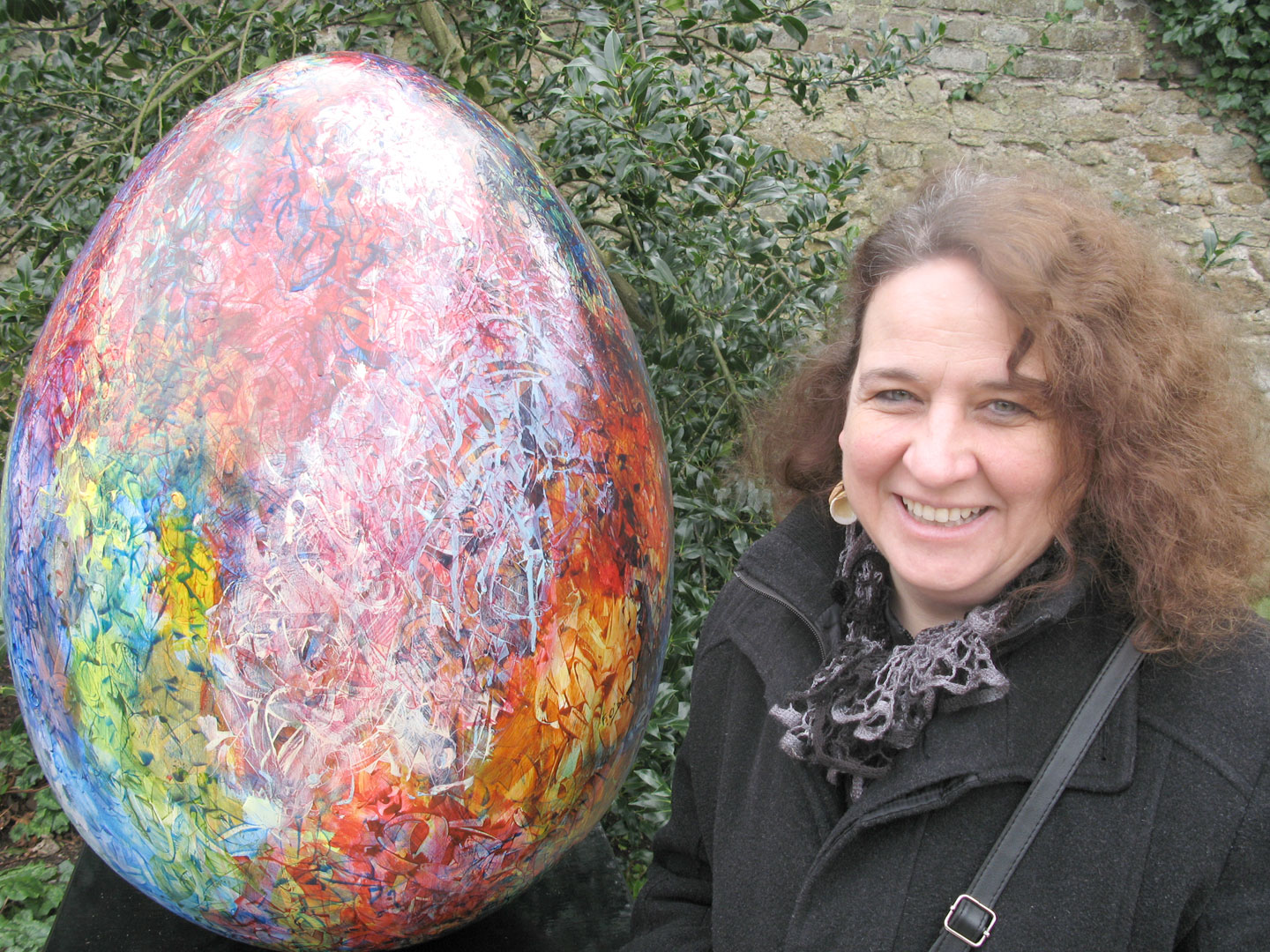 It took us ages to find the entrance to the Regency Garden, a walled garden within Marlay Park, where all the eggs were hiding (in plain view -- except the one which is masquerading as a shrubbery).  The entrance was through the coffee shop, where we returned later for twelveses.  The coffee shop patio seems to be the happy home of a peacock and peahen.  Here is the peacock being very impressive indeed! 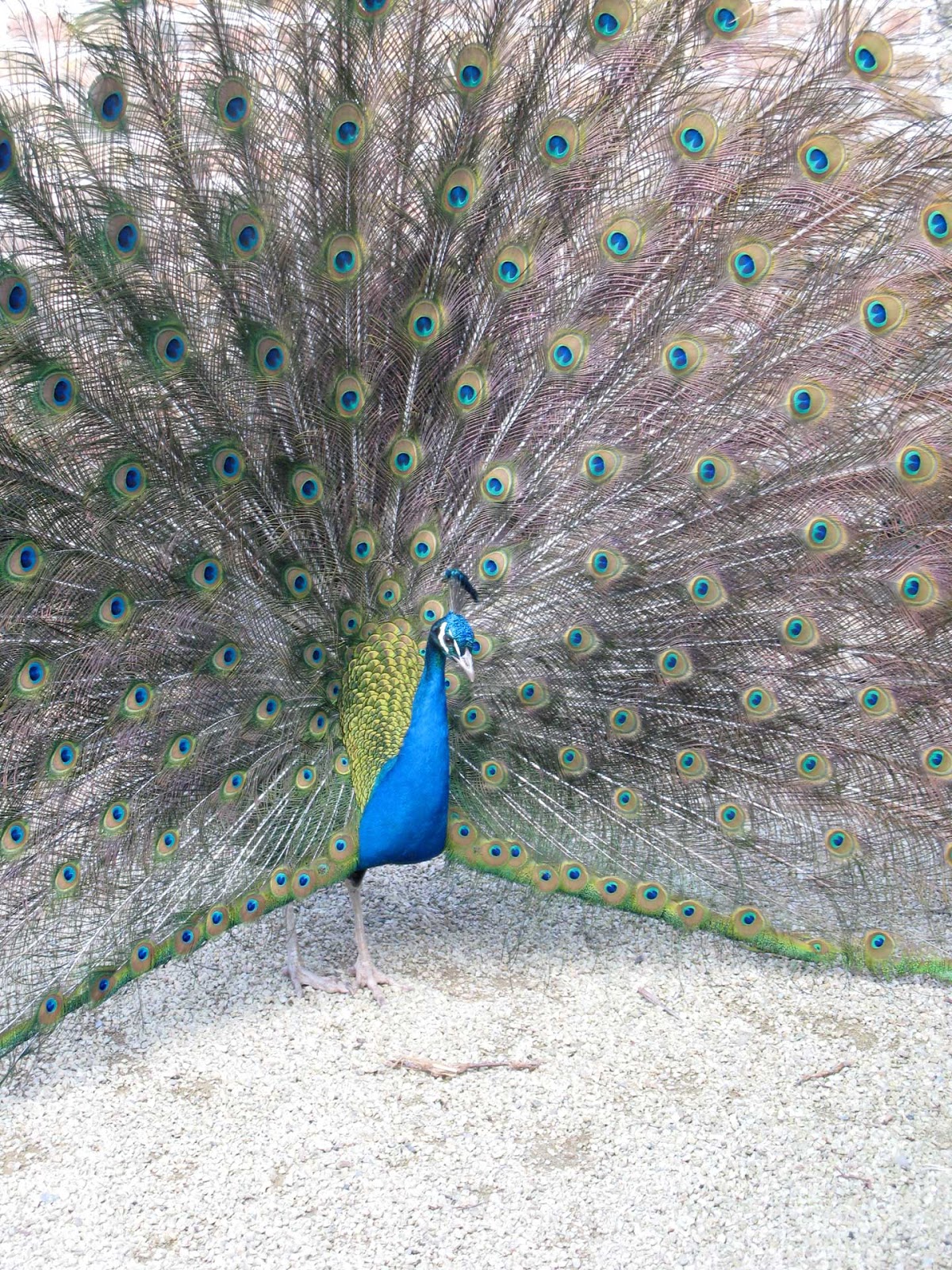 Posted by Lorraine Whelan at 11:41 No comments: