A few weeks ago I blogged about the rough wall textures that I find so attractive at Rathfarnham Castle (see here) but there are also other things about the architectural restoration that really catch my eye too.

In the hallway on the second floor, there is a small but deep "window". Of course, I have been obsessed by stone windows for a long time: my series of paintings from the late 1980s to the early 1990s, which formed the "My Tower of Strength" exhibitions, are based on stone windows in ecclesiastical ruins I have seen throughout Ireland. This is not so much a window, but an alcove, and there is another in The Pistol Loop Room. Perhaps they were once windows? 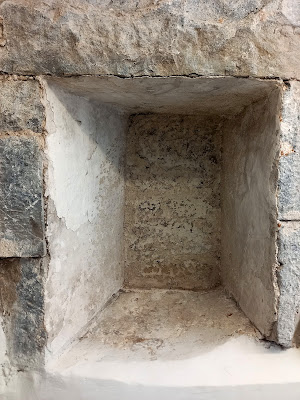 I think a curvy door is magnificent! There are several of them in the building, continuing and fitting snugly in the line of the wall where there are curves rather than corners. 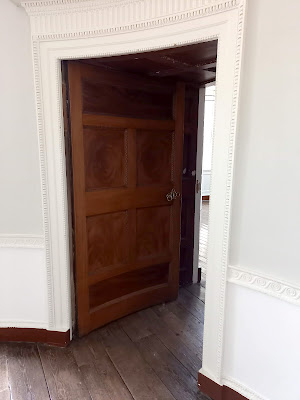 There is lots of finely crafted plasterwork throughout the building. 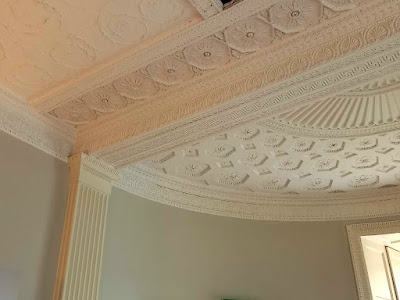 I love the juxtaposition of the fine plasterwork and the distressed walls of The Dining Room. 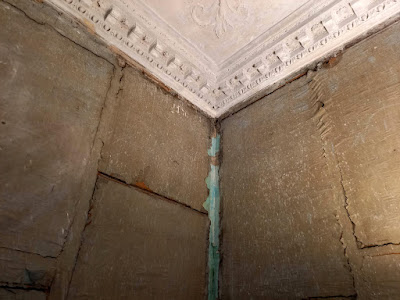 The Saloon has wonderful plasterwork in the ceiling, which paintings are set into. (The paintings are early 20th century religious works commissioned by former owners, the Jesuits.) 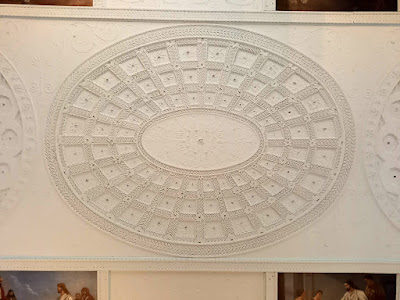 As with the Kingston Road painting (here) I had a pretty clear idea of what image I wanted to represent my home when I moved back to the town of Bray from rural Kerry in 1996. Prior to giving all the walls a makeover paint job before moving in, I was horrified to find the stairwell was home to dormant but still living butterflies. My fear of butterflies comes from many years of seeming to be a target for both swarms and singular colourful insects in Toronto as they dive-bombed my curly head. My husband carefully collected the butterflies and set them free - once outside they shook off their stasis. So creating this painting was a bit cathartic for me and I am happy with the resulting overall image of rebirth. I started the painting at the end of August with composition outlines. 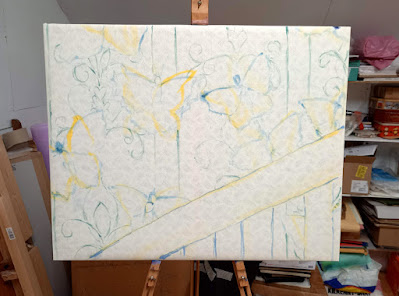 Finding images of 1950s style wallpaper was simple enough, I just had to choose something that suited my memory. At first I thought of using images of Monarch butterflies, but these were a type of butterfly that were more common to my childhood in Toronto. Here in Ireland it is the Small Tortoiseshell Butterfly that is very common and I expect that that was the likeliest species that I found on the stairwell wall of Florence Road. 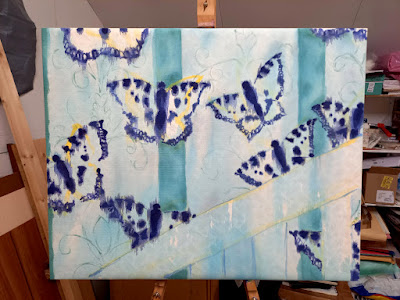 While I set about making each buttefly unique I also wanted them to obviously be the same type. I gave enough three dimensionality to the bannister railing to make it visually stand in front of the butterfly wall. 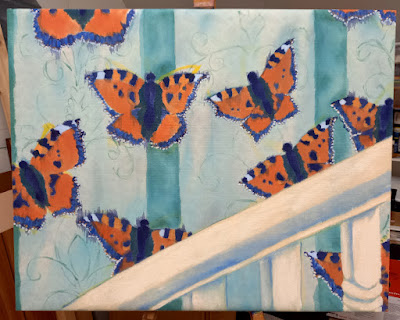 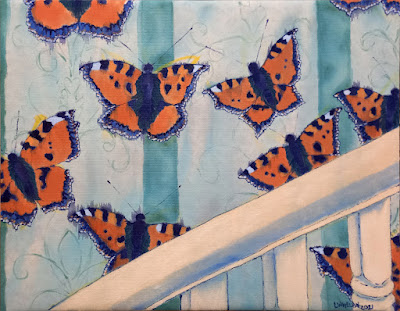 Posted by Lorraine Whelan at 10:31 No comments: