It has been over a month since I returned from Glasgow, but I did take a lot of pictures which I am never going to get through it seems! My last day there was spent quite busily checking out shows and galleries from the prestigious Turner Prize Exhibition at The Tramway to a small exhibition of video & sculpture at Celine, an alternative gallery in a private apartment. I wanted to go to the Gallery of Modern Art (GoMA) and managed to fit in a whirlwind look at it before high-tailing it to the Institute of Contemporary Art for a meet-up chat with its dynamic director, Francis McKee.

I had read about the cone on the Wellington statue at the entrance to GoMA -- it has been a beloved eccentricity of the city since the early 1980s to have a traffic cone hat on the figure. Looks like he has a cone in reserve at his feet... 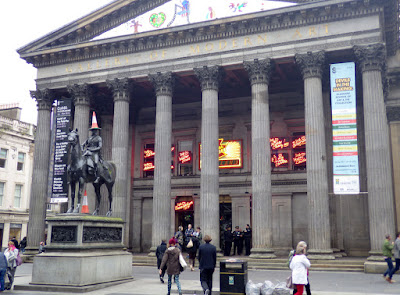 The group exhibition "Devils in the Making" explores the relationship of the gallery collection to Glasgow School of Art. GoMA opened nearly 20 years ago to the criticism that it did not include internationally acclaimed Glaswegian artists and through this show celebrates a situation redressed. All the artists in the show are graduates of GSA.

The three white sculptures, abstract figursea are by Nick Evans and the piece to the left of the white sculptures is by Alex Frost - it is difficult to tell from the picture, but, if my memory serves me, it is a 3D mosaic of a crumpled "Ryvita" wrapper. 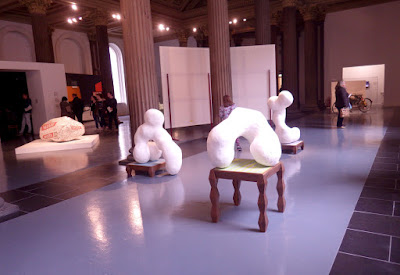 I really liked this sculpture by Martin Boyce -- I didn't realise it was neon tubing when I first saw it, just strange ethereal light emanating from the mesh skewed basket. The effect was somewhat unbalancing! 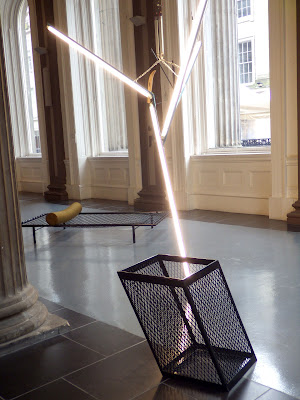 I was immediately attracted to this colourful jumble of half-chairs by Jim Lambie. My husband, James Hayes, was not in Glasgow with me, but this made me especially think of him. 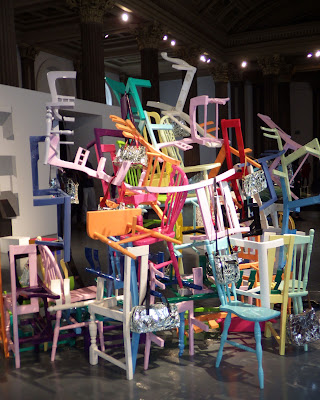 In 1998 James had an exhibition, Tables/Tableaux, at the Basement Gallery in Dundalk. The gallery is divided into two spaces, and one of them contained Family -- an installation of floating, brightly coloured kitchen chairs,  . 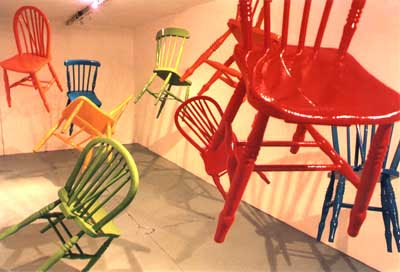 Posted by Lorraine Whelan at 20:04 No comments:

I was looking for some specific old paperwork last month, and I thought it was in a particular grey file box below the shelves in the stairwell. To my utter surprise the box did not contain the expected paperwork, but instead it was an archive of sketches and small works from the 1980s!

In 1983 I was experimenting with encaustic and collage and this small piece on board was the starting point for a series of works on paper using cutouts of hands to explore gestures. 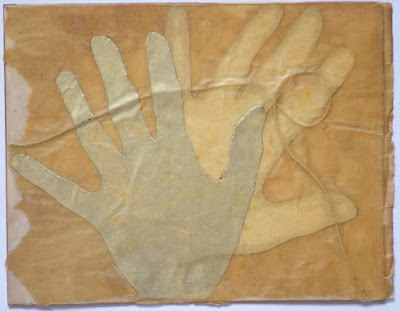 During the early 1980s I first started my practice of recording my dreams through both writing and image. 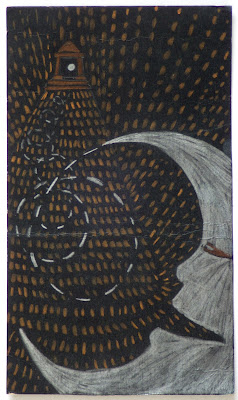 Though I don't remember the specifics of this or the above dream, I know they were dreams that I had while on holiday in Ireland in 1984. 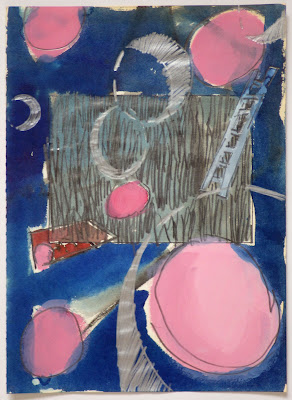 In this sketch I was trying to simplify dream imagery of my home and a ladder that kept appearing in dreams. The home image was apt as my parents had sold the house in Toronto and returned to Ireland. 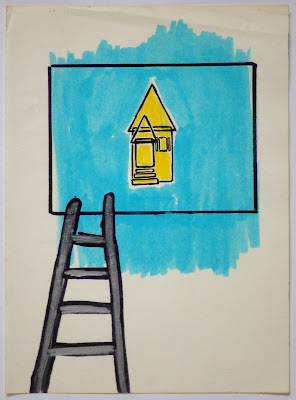 While on that holiday in Ireland I also did a fair few self-portraits in different styles and different media. This is pen and marker in my sketchbook. 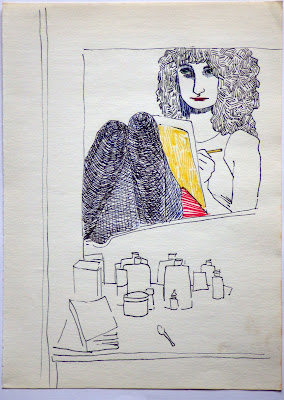 The dressing table in the room where I was staying had a large mirror which accommodated my self-portraiture! This picture is limited watercolour and ink. 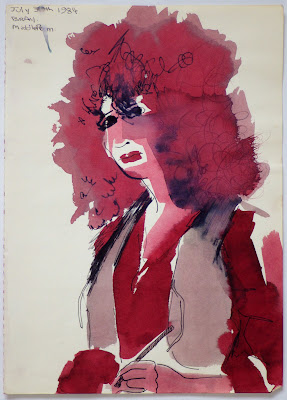 I thought I had better post some pictures of a few of the galleries I went to in Glasgow, before I forget entirely! I don't know what happened to the pix I took from the first day (I was having a malfunction when working the camera I guess). After meeting at the edge of Kelvingrove Park, we headed to the Common Guild to see the Thomas Demand exhibition. We had a number of tours of Glasgow School of Art work areas throughout the city and GSA Reid Gallery, and also paid a visit to Transmission gallery for a very large group exhibition (many artists over two floors).

We started the second day (I think) with a visit to Mary Mary, a gallery a short walk away from Central Station, the group meeting point. The gallery is spread over 2 rooms, and a group show "I hope to God you're not as dumb as you make out" was on exhibit. The show consisted of individual pieces by Matthew Brannon, Milano Chow and Alan Reid and a bed installation by the three artists in collaboration. 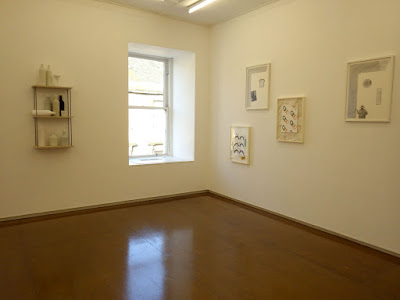 The duvet cover on the bed was printed with recognisable portraits of contemporary thinkers. 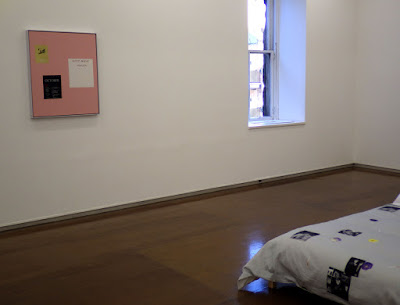 We made our way to the gallery 16 Nicholson St where the group exhibition "That's Genetic" was on. The show included mixed media works by Jennifer Bailey, Lauren Hall, Tessa Lynch and Sarah Rose. 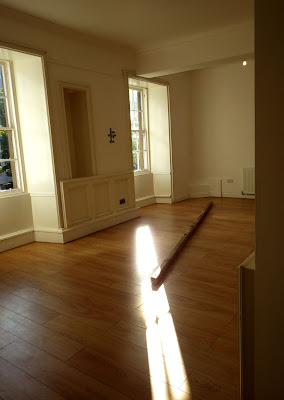 I was delighted to see the paintings of Adrian Morris (d. 2004), an artist of whom I was unfamiliar, at 42 Carlton Place. The gallery itself seemed such a respectful place with lighting from both windows and overhead fluorescents softened by translucent paper screens. 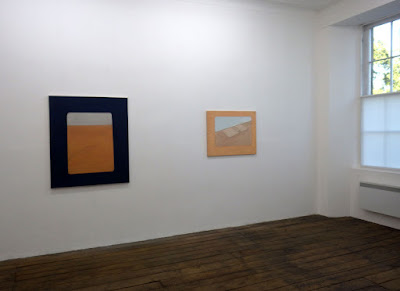 We saw a show at the Modern Institute entitled Electric Magnetic Installation, by Hayley Tomkins. The exhibition was a mix of made objects and found objects. 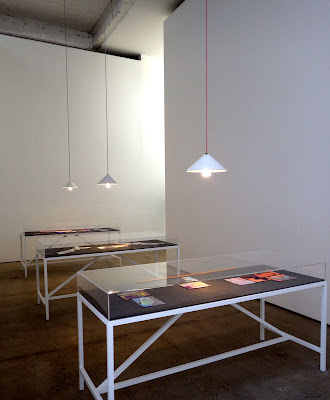 Tompkins is interested in diary and colour; the setting of wall works on angles is accidental in appearance but I think challenges the way one looks at 2D works. 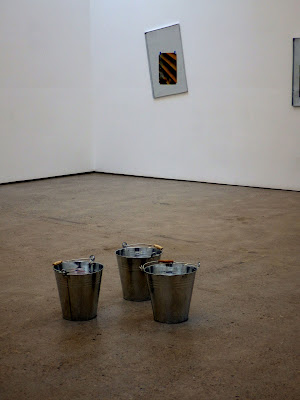 In the afternoon we headed to the Glasgow Sculpture Studios for a tour around the facilities, and to see the current exhibition by Nicolas Dashayes, "Darling, Gutter". It was a pity that the heat was not turned on in the gallery, as these jesmonite sculptures were directly attached to the heating pipes within the building, so they should have had warmth radiating from them. 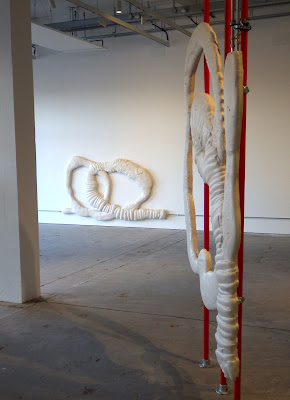 Posted by Lorraine Whelan at 15:39 No comments:

As well as all the excitement of carving pumpkins into jack-o-lanterns every October, 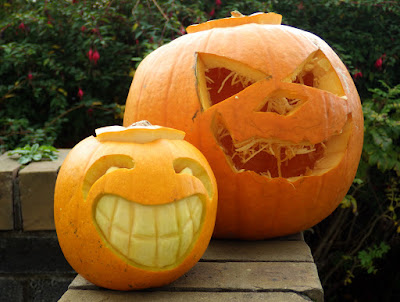 it is the season for me to take out last year's pumpkin mush from the freezer and make a few batches of muffins. These get decorated as jack-o-lanterns too and get sent into school and/or Girl Guides with my daughter for her and her friends. If I have enough mush, I can make additional batches of muffins for sharing around elsewhere. 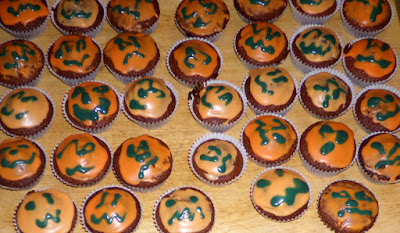 So after Hallowe'en night, the carved pumpkins get chopped and peeled and cut up into small cubes or rectangles. 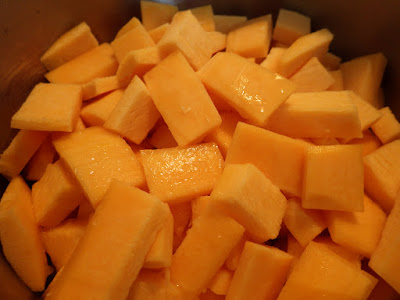 A large orange (or several small ones or clementines) and a lemon are peeled and juiced. The juice and a tiny bit of water are added to the pot of pumpkin cubes (the pumpkin release a lot of water when cooking). The peel is cut into slivers 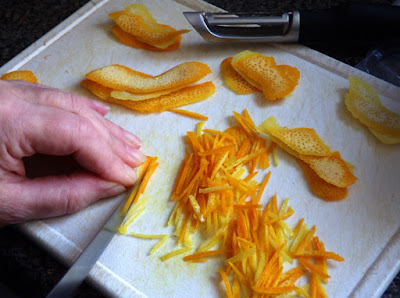 and added to the pot. Cook this gently on low-medium heat, stirring periodically, in a large heavy-bottomed saucepan. 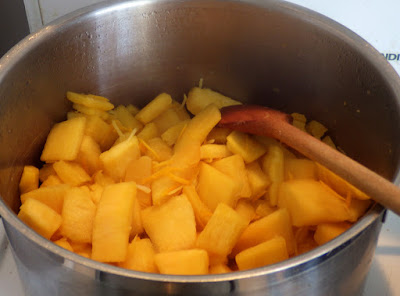 When all the pumpkin is cooked, it is soft enough to be mashed. Tilt the pot a bit to see how much liquid there is; if there is a lot of liquid, raise the heat to boil some of it off, 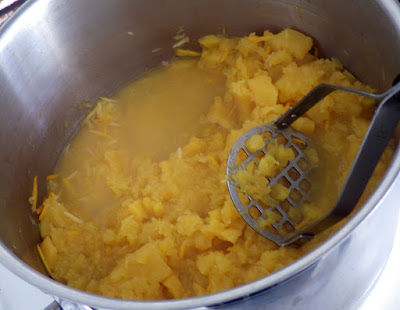 The pumpkin mush needs to be moist in order to give moisture and flavour to future pumpkin muffins. I will give the recipe for the muffins in another post, but if you can't wait, use pumpkin mush in the same recipes that you use for carrot cake or banana bread. Compare the picture below to the picture above to get an idea of how much liquid should not be left in the final mush. 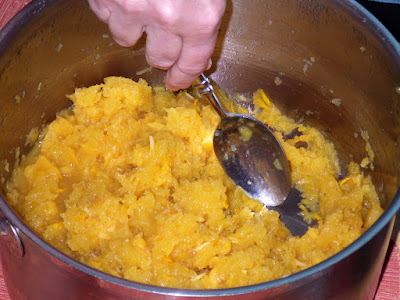 I packed the mush into equal size freezer bags. In the past I have used weights of 350 g and 500 g, which also work fine in my recipes for muffins, and also in pumpkin pie (I'll give a recipe for that in a future post too). So it is a little bit random that these packs are 450 g but I figured it was a reasonable amount when I was packing and weighing. I put the 3 bags of mush into an additional freezer bag but will only use one bag at a time. One bag of mush will happily be used in a recipe that makes about 5 dozen small muffins or 2 pies. 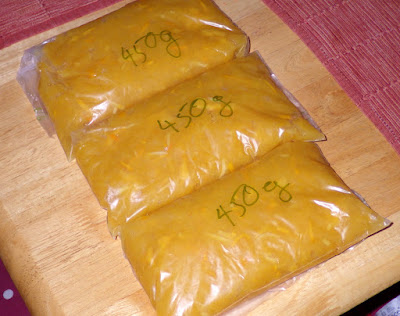 Posted by Lorraine Whelan at 08:32 No comments: