Although it was a hike to get there, a visit to Farmleigh House Gallery last week was a worthwhile delight. The Gallery is divided into two separate spaces, both of which were curated by Mark St John Ellis as a sister exhibition to the one I had seen a few weeks ago at Rathfarnham Castle, and blogged about here. As such I viewed the exhibitions as related, and thought of the similarities and differences between the two installations. While Farmleigh House is a historical building (also worth a visit), the gallery is contained in a completely renovated outbuilding, so it is a modern space. The intimacy of the two gallery spaces is pronounced by the dim ambient lighting (this photo has compensated for the dimness) and spotlighting of individual artworks. 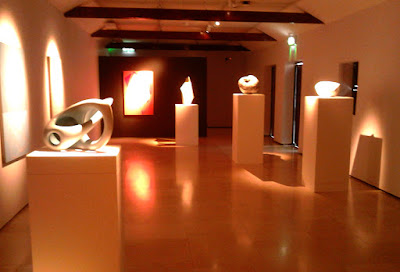 Unfortunately there was no catalogue available for Gallery 1 on the day I went, but I was able to get some information, with a quick google search, from nag gallery's website here. 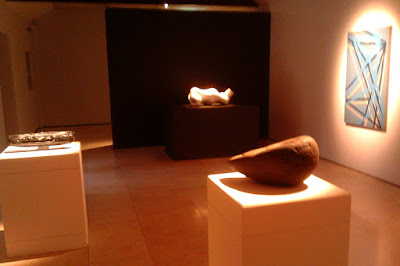 I was most interested in seeing the State Collection ceramics and recognised the work of Katharine West. 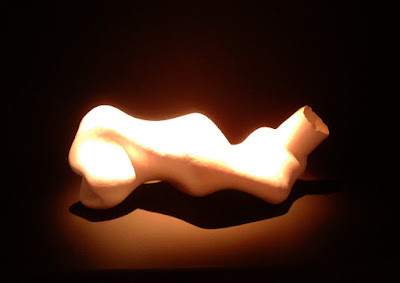 I specifically loved this ceramic vessel sculpture, which seemed like it had a gashed tire around its rim (this is, however, totally ceramic). 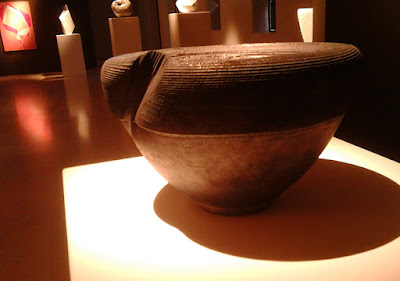 The interior glazing and spiral movement definitely made me think of a dizzying fall into the void. 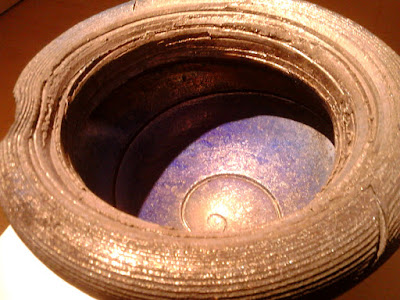 As each work had its own spotlight in the dim room, it was easy to focus on the individual pieces, yet a work could always be viewed in relation to at least one other piece. 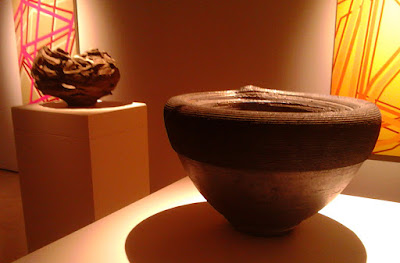 Noting the expanded clay technique of texturing this work, I knew there was a lightweightness to it despite its size. Another friend referred to this piece as a "hornet's nest" and its organic quality is a tactile pleasure for the eyes. 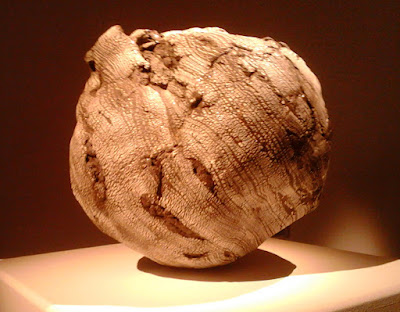 Posted by Lorraine Whelan at 09:15 No comments:

In June I had gone to a food festival in Rathfarnham and also to have a look at nearby Rathfarnham Castle - an Office of Public Works restored fortified house from the 16th century. While in the "castle" an art exhibition was being set up. I was able to see some of the works and my interest in the group exhibition was piqued enough to return recently, before the exhibition closed. The exhibition was curated by Mark St John Ellis of NAG Gallery, as one of nagOffsite installations, where the work complements and is complimentary to the historic space in which it is situated.

In the first room there is a curious archival box, by artist Kristina Huxley, which has tags and numbers and envelopes and poetry perhaps. I was told, on my June visit, that Huxley has catalogued dust from the building. This is a labour of love piece of work and I was able to extrapolate meanings from the process related to me as well as from the form of the work. On my return recent visit I was also glad that there was some information on the artists, the work, and the curator of the exhibition (Mark St John Ellis) and nagOffsite as a creative presentation entity. This room also included some ceramic ware and boxes by Masashi Suzuki that present the epitome of shibui aesthetic (modesty, naturalness, texture, spontaneity). The framed photographs displayed with Suzuki's work, show ceramics as items of contemplation. 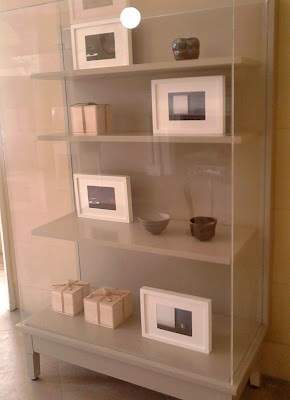 Moving along into the larger "dining room" works by Kristina Huxley and Helena Gorey were placed on walls/faux walls and juxtaposed beautifully with the painterly deterioration of Rathfarnham Castle's actual walls. 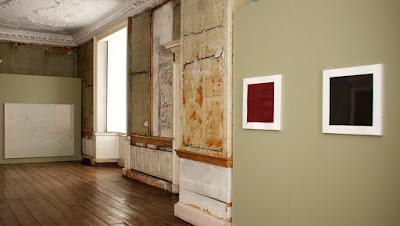 There was also a table cabinet in this room which had Japanese Edo Period wrapping paper displayed next to one of Gorey's subtle watercolours. I do not agree with the assumption of worth by proximity, and I did not think Gorey's work fared well in this display, where the Japanese paper and calligraphy were far more interesting visually. 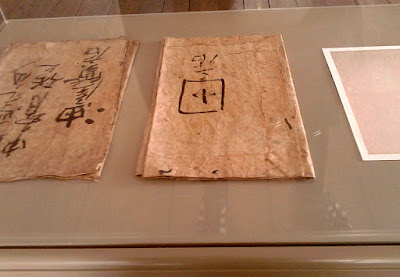 The next room had several table cabinets also, as well as an ambient sound piece by Elijah's Mantle and digital prints by Roseanne Lynch. I was most curious about Huxley's "Citizens of Dust" rolled paper drawings and balls that made me think of watching men in the south of France playing bowls on a hot day. I found out later that the spheres were made of wax and soot and were the same size as musket balls excavated from Rathfarnham Castle. 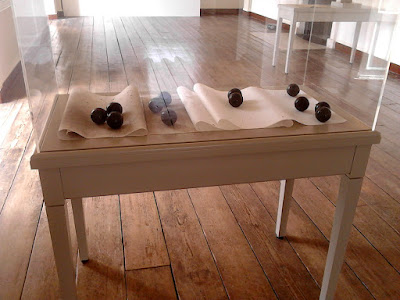 A nearby display table held more Japanese wrapping paper with calligraphy and a small sculpture of a Buddhist figure from the personal collection of John Hutchinson. The overall effect of these items within an exhibition of contemporary artists is to stress temporality - items of everyday use (wrapping paper) become items of art with time. There is an overall mood of contemplation and timelessness within the exhibition in its entirety. 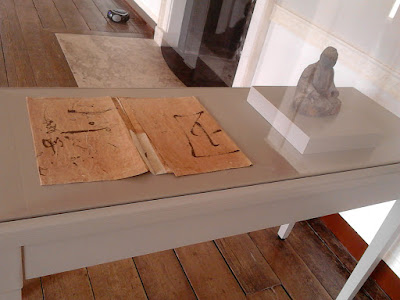 In the last room encountered, the intimacy of the space is palpable. One is almost encircled by Jane Proctor's drawings (like being on a stage of an amphitheatre and being encircled by an audience) and their subtleties beg for closer inspection. The grid drawings resemble woven cloth, and one's eyes follow the meticulous warp and weft. This is contemplation at its finest, as one is virtually transported while looking at this work. 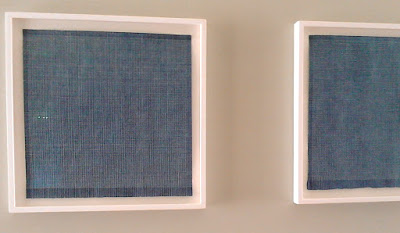 Also in this small room, is a table cabinet with another of Kristina Huxley's "Dustopia" boxes and a furoshiki package, the blue of its cloth highlighting the bit of colour in Huxley's box and
complementing the colour of Proctor's surrounding drawings. 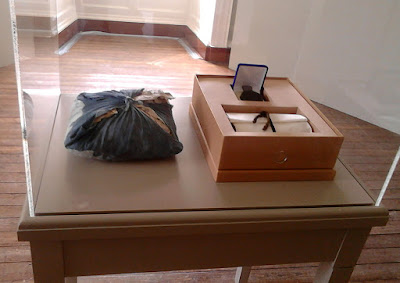 Posted by Lorraine Whelan at 08:45 No comments:

At the end of July a friend and I had signed up for a drawing workshop given by the Berlin-based Irish artist/architect duo plattensbau studio (Jennifer O'Donnell & Jonathan Janssens). They had a short residency at the Irish Museum of Modern Art (IMMA) to coincide with the group exhibition, A Vague Anxiety, of which they were a part. I hadn't seen the exhibition yet, so did not know what to expect, but they began the workshop with a presentation of their practice, which is arcitectural but always with a concern of the human presence. 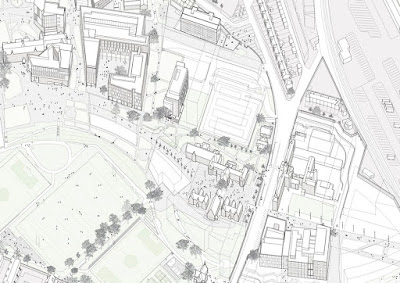 The focus of the workshop was the fact that "IMMA Was A House", or rather, a home and hospital for veterans. The participants in the workshop would assist in the research of mapping signs of habitation at IMMA, specifically evidenced in the courtyard. 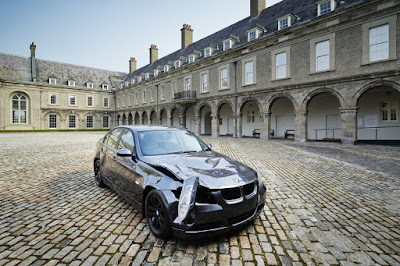 Each participant was provided with a clipboard containing an architectural drawing of the courtyard, markers, blank paper, and sticky dots. We were sent to the courtyard to observe... I was interested in the clock tower and sundial. Both used Roman numerals. 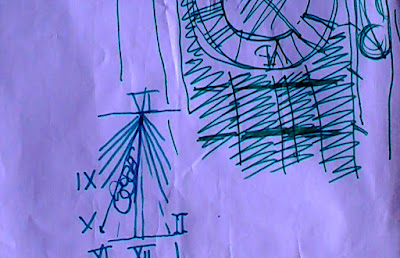 Details such as chimney pots (and a seagull preening beside a chimney pot), a window, curved features interested me. 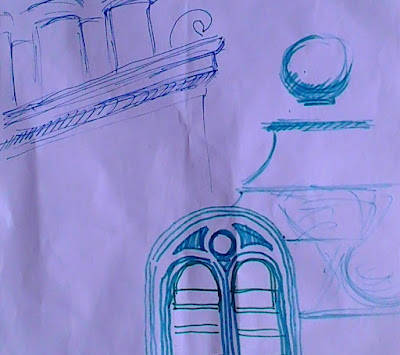 My friend was walking around making her own observations. I wrote down a few words overheard... 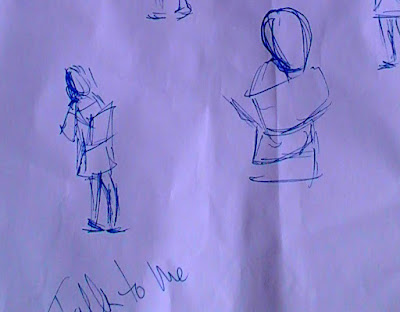 I also marked the areas on the ground where there were circular and rectangular utility covers, on the provide architectural plan. I left this with plattensbau. There were large plans taking up several tables in the Project Space at IMMA, and it was here that after an hour or so the participants crowded around and added their observations. Afterwards there was a lively discussion about the evidence of habitation provided by observation. Before leaving IMMA, I and my friend made sure to have a look at the A Vague Anxiety exhibition, specifically because we wanted to have a closer look at the work of plattensbau in the context of the exhibition. Of most interest to me (though I could not find a proper picture of it - below. at the very bottom, only shows a partial image) was the to-size architectural drawing of O'Donnell's and Janssens' former flat in Dublin, but it included "things" in the flat (ie, the chopping board with carrots). It made me think of the archaeologically precise work that was done to bring the Francis Bacon studio from London and recreate it in Dublin some years ago. 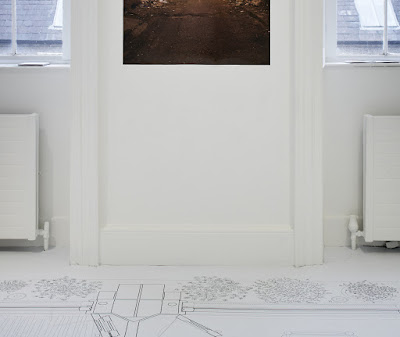 The other work that plattensbau have in the exhibition is an architecturally rendered drawing of the apartment buildings, which are across from and identical to the apartment in which they live in Berlin. After seeing their presentation earlier, I was much more interested in taking a look at the signs of habitation in each apt - the differences between balcony furnishings, plants, etc. - rather than focusing on the bland buildings and the initial feeling of "sameness". 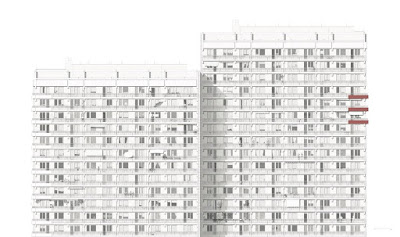 I was looking forward to seeing this exhibition at the National Gallery of Ireland, and was not disappointed. In celebration of the centenary of the founding of the Bauhaus school, the NGI borrowed four print portfolios from the Staatsgalerie Stuttgart. The portfolios were originally put together to raise funds for the Bauhaus art school (though because of German inflation at the time, this was impossible) and contained work by teachers at the Bauhaus and international artists who were petitioned to contribute. Wassily Kandinsky was one of the masters at the Bauhaus, and this colour lithograph, Composition, is from 1922. 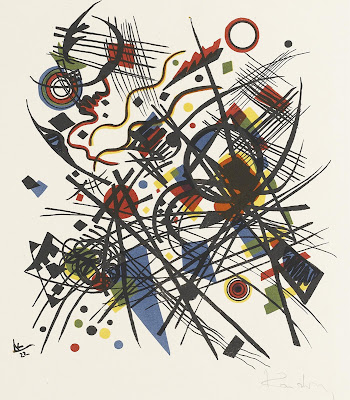 This is a detail of Hoffmanesque Scene, 1921, also a colour lithograph, designed by Paul Klee, another master at Bauhaus. The Bauhaus students did the printing editions of the works for the portfolios in the school studio, giving them both printing experience and exposure to the work of international artists. 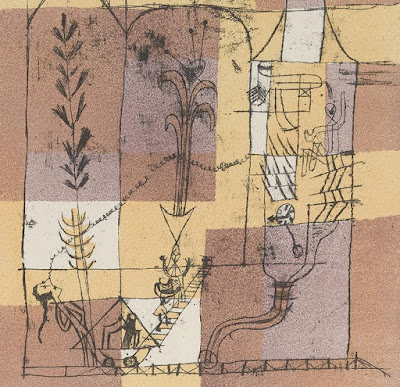 I particularly loved this linocut, Two Dancers, c1913, by Christian Rohlfs. It was exciting to see the works of so many artists who, for me, are like household names (Kandinsky, Schwitters, Kokoshka, Boccioni, Feininger, Albers, Goncharova, etc) but I was completely unfamiliar with Rohlfs. Now I am! 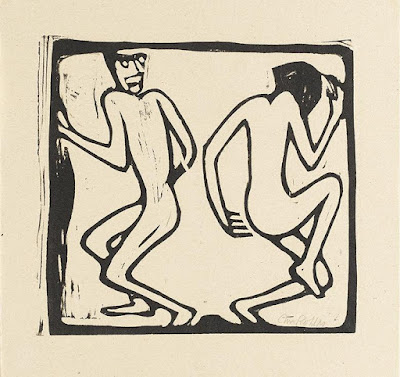