I feel like I've had the plague for awhile now - I caught a cold about two months ago; then got tracheitis (a throat infection) from which I never quite recovered. Still not feeling well a week after the antibiotic course finished I went back to the doctor. Sinusitis was the next diagnosis leading to a longer antibiotic course, which finished a few days ago. Towards the end of last week I felt like I was coming down with something while still on the antibiotics. So the prescribed medicine is now finished with and I have a horrible cough and cold still. Time for lemon ginger tea. Actually, I made a nice batch of ginger and honey to put in the fridge for any time. Here's the simple recipe. 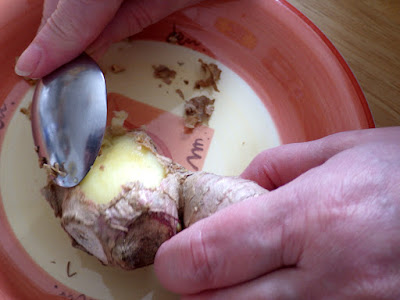 Peel the ginger handily with a spoon. 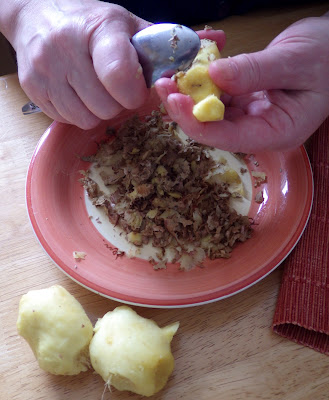 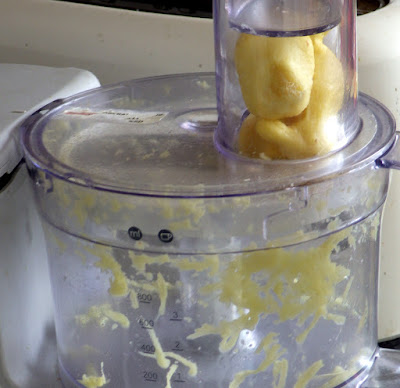 The ginger is nicely mashed and ready to put in a jar. 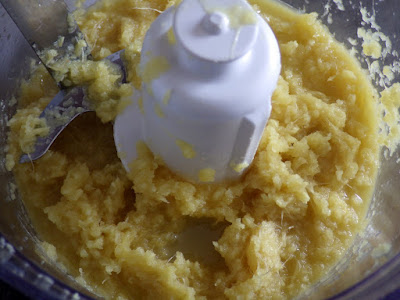 Honey is a great preservative, so mix in with the ginger. This lasts at least a month in the fridge (usually it is consumed before that). The mix should be a little runny. Add about a spoon (or to taste) of this mix to boiling water and a dash of lemon.  Lately I have been simmering it with a twig of turmeric for about 5 minutes. 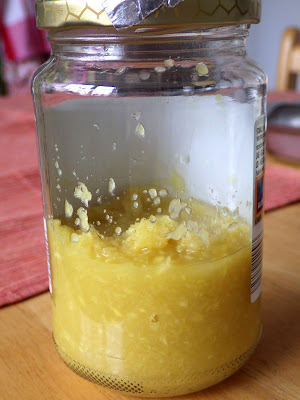 Posted by Lorraine Whelan at 11:43 No comments:

Many years ago, when discussing my Mum's Will with her, I suggested that she specify that all artworks from her artist children (there are several painters & writers in the family) be returned to them. Among items returned to me, after my Mum's very sad death at the end of this summer, were an abundance of special occasion cards that I had made for my parents over the years. My Mum had already returned some to me, while she was living, so I was surprised at the amount of cards that she still held onto. Making cards has always been an adjunct to my work - the cards are usually either ideas that I am thinking about for the future or ideas related to works in progress.

In memory of my Mum, I will post a few of the Mother's Day cards I made for her. This one has no date, but is probably from around 1986. 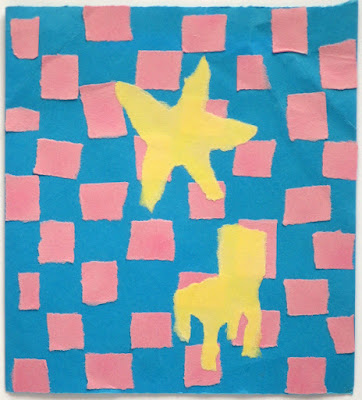 This one is from 2001. My Mum's sister had given me a big bag of pears from her garden and I did a lot of dawings and paintings based on them. I became pregnant that year, and pears became a symbol of fecundity for me. 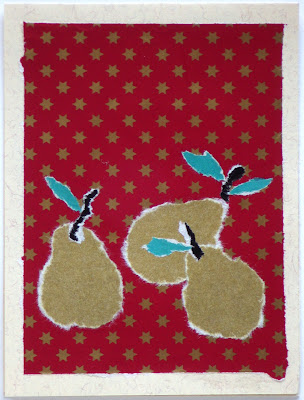 This card is from 2005. I love blooming rhododendrons, though by many they are considered a weed tree. 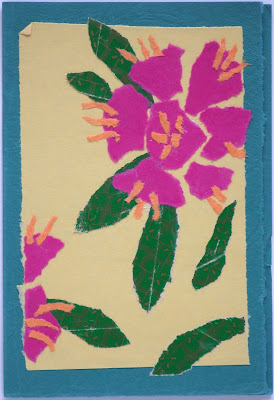 This abstracted 3D bouquet is from 2007. 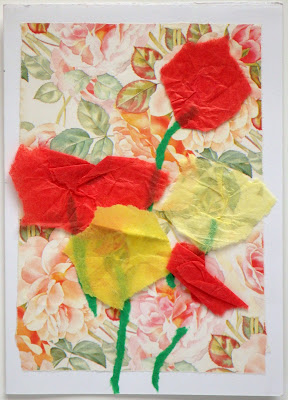 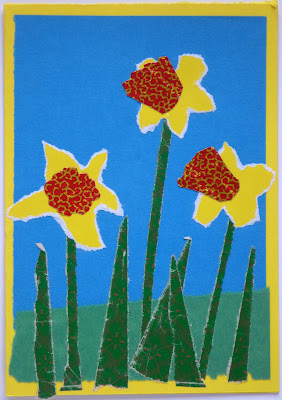 These roses are from 2012. There are plenty more Mother's Day cards, all different, but I thought I would just show a few that I particularly like. 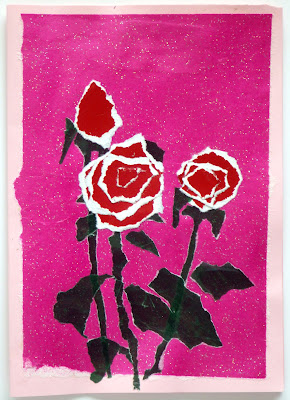 Posted by Lorraine Whelan at 11:46 No comments:

I have had a very busy few weeks, getting out and about! A few weeks ago, while my daughter was on mid-term break we made our way in to Dublin The National Museum at Collins Barracks. We thought it would be an awful shame if we didn't get to the special exhibition Proclaiming a Republic in the centenary year! Before going in to that exhibition, however, we noticed a small building dedicated to the yacht "Asgard". This private boat was used for gun-running in the early part of last century, prior to the 1916 Uprising. It was a fairly nice display, the yacht being the centrepiece with smaller historical artefacts, photographs and didactics in display cases and the surrounding walls. 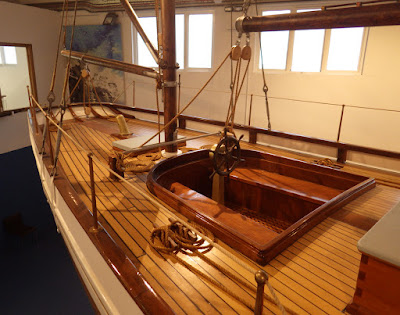 Proclaiming a Republic is quite a huge exhibition, which is incredibly wide-ranging as it takes in both sides of the conflict, social and family issues, the suffragette movement and cultural aspects. I could easily have spent longer than I did (nearly two hours) at the exhibition but my teenage daughter does not have the stamina for museums... Amazingly, the republican flag that was raised at the GPO (General Post Office on O'Connell St (formerly Sackville St) is relatively intact. It was taken down by the British in 1916 but returned by the Crown for the 50th anniversary of the Rising. 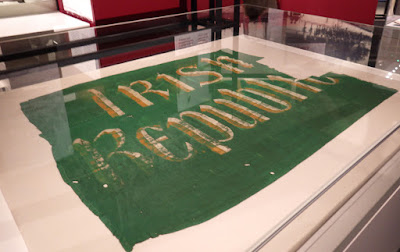 At Collins Barracks we bumped into some friends we hadn't seen in awhile, which prompted us to go back into Dublin a few days later to see the VUE art fair that my last blog post talked about. A week later I found myself in Dublin again, at the National Print Museum for the launch of Theo Honohan's book Mechanicsville. The book is an "essay in 11 parts on the character of engineering", which I am finding fascinating and somewhat surreal (though I am not sure if this was the author's intention...). The Print Museum was the perfect setting for the launch, as it was a setting of machines - old printing presses, typesetting machines, paper ruling machines, etc. There were also some artefacts relevant to the centenary celebrations. I thought perhaps this was a draft of The Proclamation. 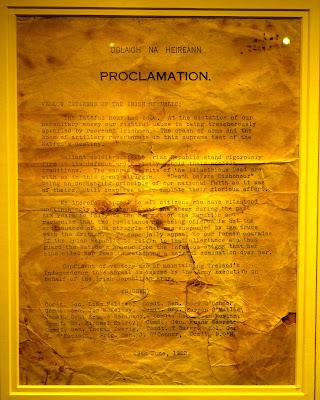 This was the third occasion I had to see a print of The Proclamation in as many weeks. First, on the day I was dropping off my books to be considered for the Dublin Art Book Fair, I had dropped in to see the Book of Kells at Trinity College, and a copy of The Proclamation was on display in Long Room. The second time was at The Proclaiming a Republic exhibition (above) and now here at The Print Museum. 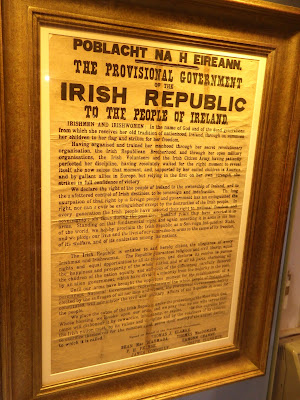 I was in Dublin again a few days later, at the launch of the Dublin Art Books Fair at Temple Bar Gallery & Studios. My Good Morning books had been accepted into the curated artists' books section of the fair. The launch was pretty packed and there were a lot of art books and artist-made books. The atmosphere was fairly casual with people very interested in picking up and looking through the books. Here is a view of one of the large round tables. 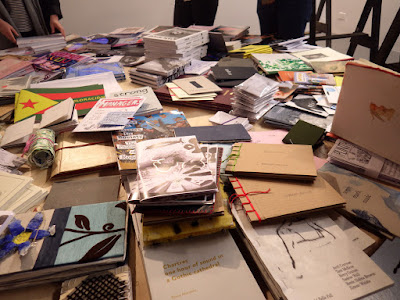 And a close up of a set of my books (all three languages) on the table. 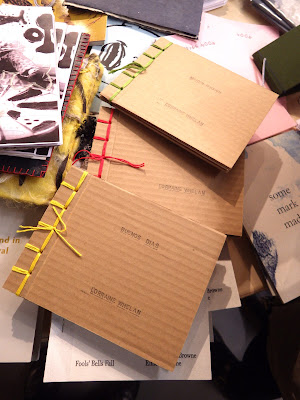 The following day I was back in Dublin, at IMMA for a lunchtime talk. The topic of Wounded Cities was fascinating and led by Professor Karen Till. There were two artists also involved in the talk, including my friend Susan Gogan who discussed her in-progress fictional film set in Berlin.

Though not in Dublin, the launch of the third (re-booted) issue of the Bray Arts Journal, took place at The Mermaid Arts Centre in Bray a few days later. A few of my images were included in the journal, but I was glad that the image of this 2012 painting, Together, was included alongside my poem Waking Dream, written shortly after the death of my Mum at the end of the summer. 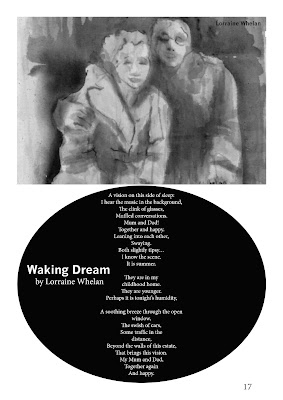 Posted by Lorraine Whelan at 14:27 No comments:

While at the National Museum Collins Barracks in Dublin last week, I was delighted to meet up with some friends/fellow artists I hadn't seen in awhile. It was because of this meeting that I made my way on the weekend to the RHA Gallagher Gallery to VUE 2016, the annual art fair in Dublin. Since Karen Hendy was one of the artists who drew my attention to the fair, it was a delight to see her painting featured at the Catherine Hammond Gallery stall at the fair. 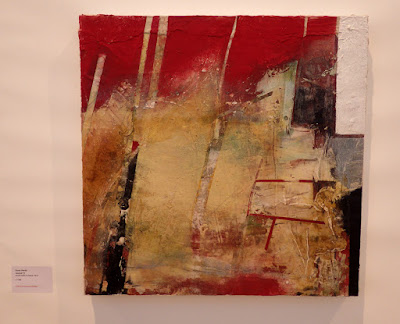 I have long been an admirer of the work of Janet Mullarney and was happy to see a small sketchbook at one of the galleries participating in VUE. I have to admit though that I was disappointed at the framing of the sketchbook, as I wanted to turn the pages! A few years ago my friend Sean O'Dwyer had shown me a specialty frame he made for a sketchbook - it had a hinge and mechanism that allowed the frame to open so that pages in the sketchbook could be turned. I still think this practical way of framing a sketchbook is both ingenious and necessary, allowing one to truly appreciate the book format as a static piece of art. 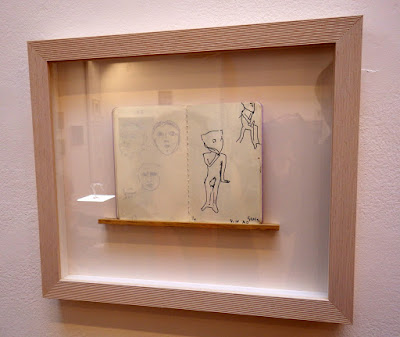 I was very intrigued by this embroidery frieze "The Politicians" by Ursula Burke. It is both a beautiful piece of work and a scathing indictment of the elite decisionmakers of this (and every) country. 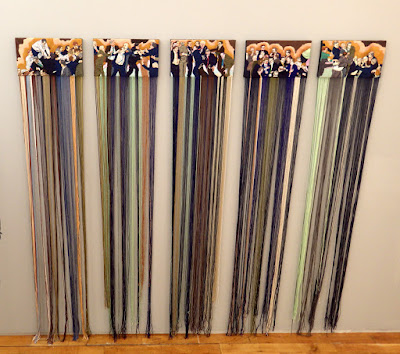 Here is a detail of one of the panels. 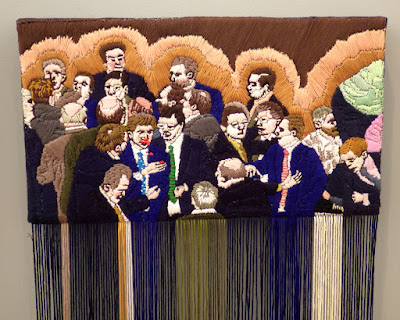 Posted by Lorraine Whelan at 12:31 No comments:

Well, it was a year ago that I posted how to make pumpkin mush for use in future recipes (pumpkin pie, pumpkin muffins, cake, etc) that I intended to share but never did! I remembered of course, when I pulled out a bag of last year's pumpkin mush in order to make muffins for my daughter to bring to both her school and to her Girl Guides troop as a Hallowe'en treat. So here is the recipe: 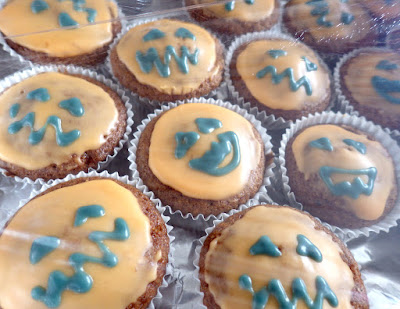 To get into the Hallowe'en spirit of course, pumpkins need to be carved into Jack-o-lanterns, and my husband has taken to the Irish tradition of carving a Willie-the-wisp out of turnip. This year he decided to skin the turnip completely, and the resulting skull looked a bit like alabaster. 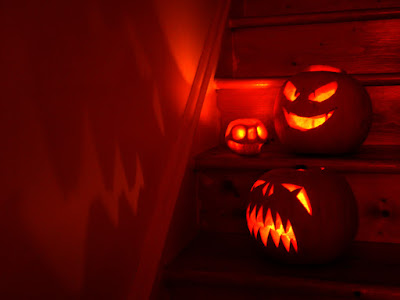 I think it is a North American Hallowe'en tradition to bake the pumpkin seeds. It is a very simple and delicious snack! After cleaning the pumpkin in preparation for carving, be sure to wash the seeds. 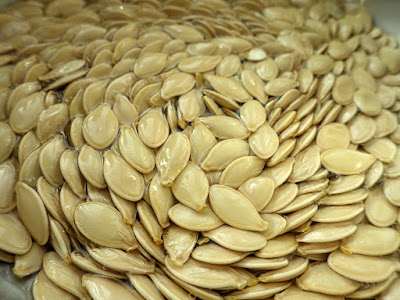 Spread on a baking tray with a few knobs of butter and plenty of salt. Bake at 350 F/180 C for about 20 mins - check after 10 mins to shake tray and check if more butter is needed! 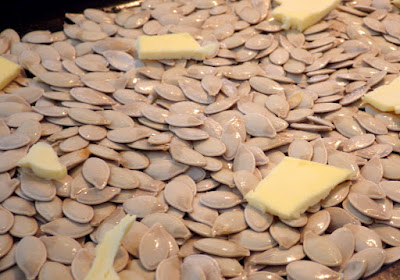 Mmmmmm, don't burn your mouth by immediately chowing down, but this snack is especially delicious when warm! 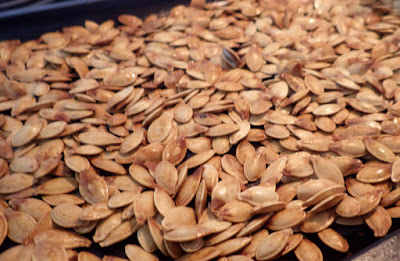