Happy Hallowe'en! It's that time of year again - the clocks have gone back an hour, the sun is setting really early, and I have taken my winter coat and scarf out of the cupboard. The heat has been on a few times now as there is a definite chill in the air. 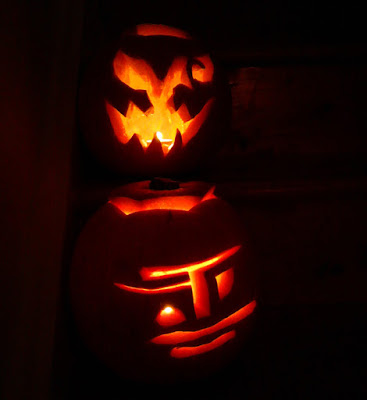 This year's pumpkins seem a little more abstract than in previous years. The lower pumpkin, carved by my husband was inspired by our recent trip to the Picasso Museum in Barcelona and seeing Picasso's version of "Las Meninas".

When the two pumpkins were carved (by husband and teen), it was up to me to wash and roast the seeds. This is an easy and tasty snack and I have given more details here. 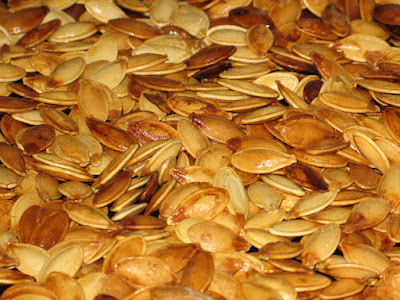 Using last year's pumpkin mush (a few packs left in the freezer), we had made muffins earlier. It was a family affair as we decorated the muffins when cooled, after the pumpkins were carved. Details of how to make pumpkin mush after Hallowe'en are here and the muffin recipe is here. 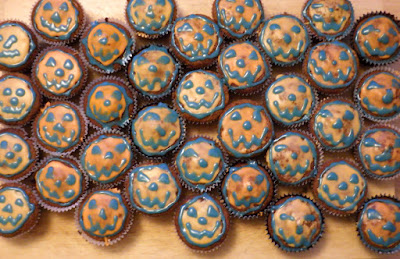 Posted by Lorraine Whelan at 09:07 No comments:

Members of the three ceramics workshops, facilitated by James Hayes at Signal Arts Centre, prepared pots last spring for a raku event planned for the autumn. The pots had all been bisque fired and glazed and waited over the summer in anticipation! 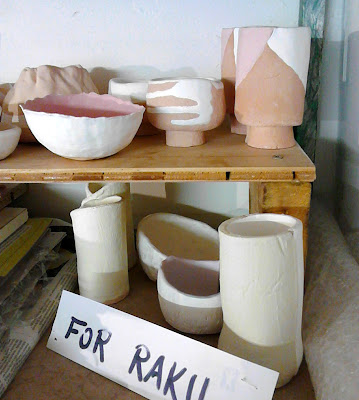 James had also built a new kiln from an old oil drum, bowdlerising some materials from the old square kiln. This kiln was much more efficient and heated to temperature in about an hour. 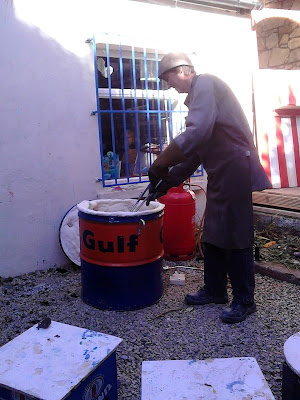 After removing one of his pots from the oil drum kiln, James gave a demonstration of some raku design techniques. 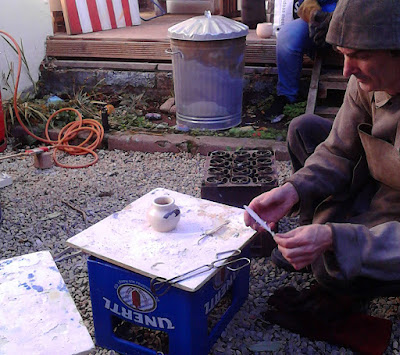 Touched to the hot pot, the feather burns a design into the pot. 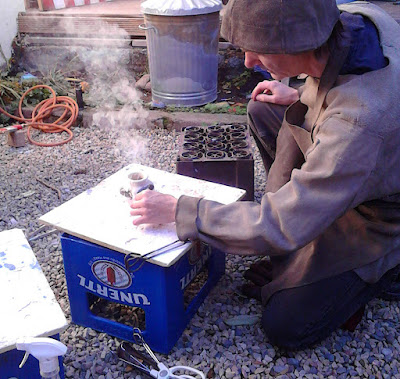 Sugar can also be (gently) thrown at the pot to create random blotching effects. 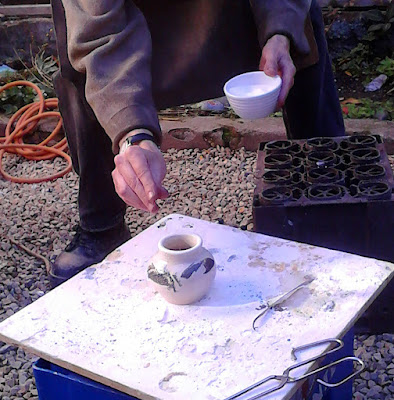 The final chance possibility is to place the pot in a "smoker". Here we used a metal trash can full of sawdust and paper. Any part of the pot that is unglazed will hopefully become black in the "smoker". 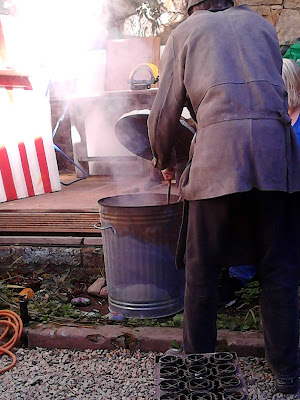 From experience gained at the previous raku event, many people - including me - had been collecting hair to burn onto the pots. I collected my own hair (which is curly) from my hairbrush and also had some bits of my daughter's straight hair. After being removed from the "smoker" the pots are dunked into cold water. 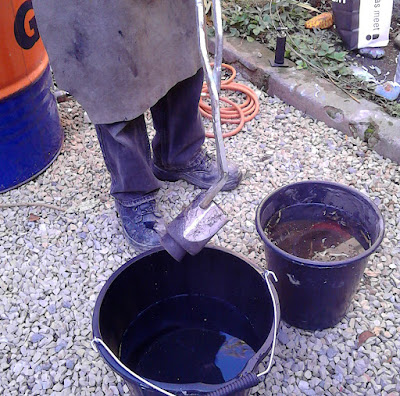 It was obvious to everyone at the event that things were especially working well and there were lots of "oohs" and "aahhhhs" as final pieces were removed from the cooling water bucket. 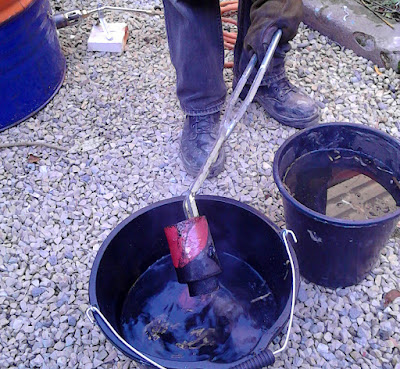 Here is a view of my two finished pieces. I used a red and a white glaze; the black is from the smoker. As well as a crackle effect from the raku process, the designs were created by hair, feathers and sugar. I was surprised that ghostly hair effects are visible in the black areas and in some parts the hair looks metallic. I am very pleased with the results! 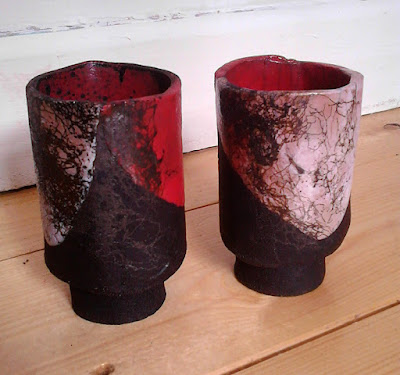 Raku is originally a Japanese ceramic process, the word meaning "comfort", "ease" and "release", among other possible translations. Here is another view of my two raku "goblets". 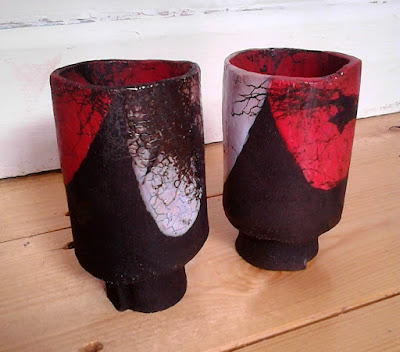 Posted by Lorraine Whelan at 08:08 No comments:

Since moving to Ireland in the late 1980s, I have always noticed and wondered at the design of the "shore" coverings that gave access to water pipes and other utilities. Some of the designs were exquisite, and I have many times thought they would make good rubbings. As a summer job, when I was in university in the early 1980s, I found myself working for a special exhibit -- The London Brass Rubbing Cenre -- at the Royal Ontario Museum in Toronto. The exhibit came from the parent centre in London, and my job was as an instructor to visitors, setting them up with paper and hard wax crayons, and a reproduction brass taken from a tomb in the UK (images of knights and ladies, and such). 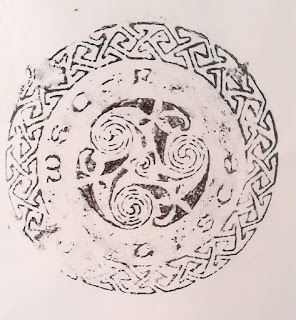 The old shore coverings in my home town now always bring this to mind. So, one of the first things I did when I started my studio residency at Signal Arts Centre last week was cut some paper, don my boiler suit, and walk around the corner from the arts centre with copper, black, and gold pieces of hard wax; I took a few rubbings from a particularly nice water pipe access covering. By the way, in Irish "uisce" means "water". 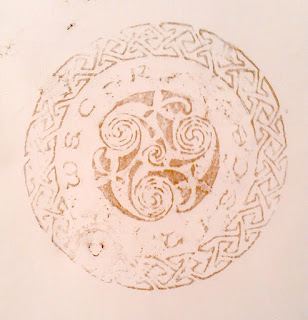 I liked the copper rubbing the best. One has to work quickly and hold the paper down so that it doesn't move. If the paper moves while working, then it is time to start a new rubbing. 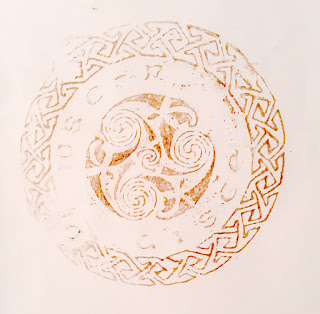 The decorative old shores (left) are uniquely Irish, as opposed to the replacement modern shores, though at least the "uisce" is retained. 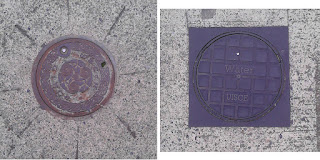 I have since found some other shores that I plan to do rubbings of, but I am at the mercy of the weather.

As the previous artist in residence left a few days early, I was handed the keys last Thursday while I was at the ceramics workshop. This gave me the opportunity to view the space again while it was basically empty - several tables, an easel, some boards and two chairs come with the space. 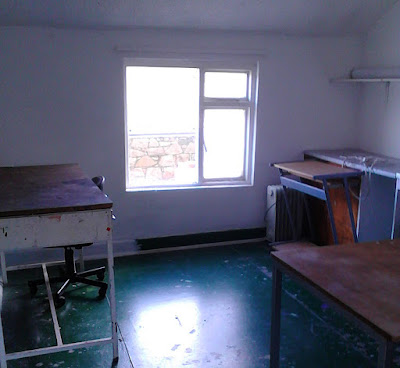 The studio is on the second floor of the arts centre and there are two windows so it is a fairly bright space. There are also two sinks! With the space in mind, I started packing things to bring with me for the immediate future of working. 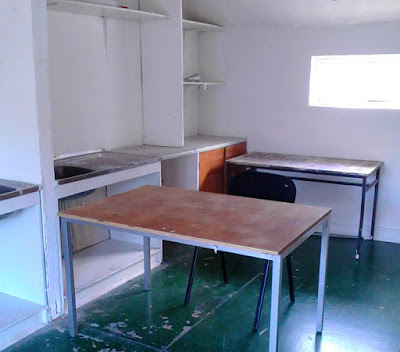 After a quick sweep, I put kraft paper on all the tables and started unpacking some boxes of supplies.

I knew I wanted to set up various specific work stations, with a focus on the tables. 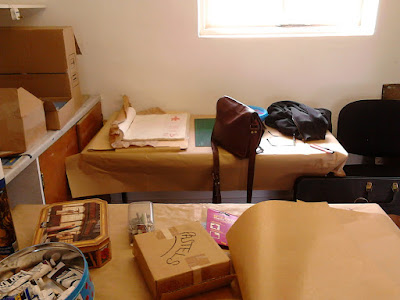 I set up the easel beside one of the tables, and set up the canvases I have been working on the past few weeks (with their ground coats). I know these are the first things I want to work on. A smaller table on wheels is perfect as a painting table. This station takes up half the room and the sinks are just opposite the canvases. 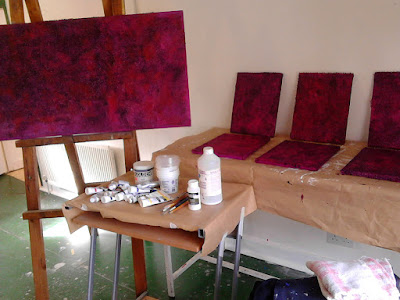 This table was a bit wonky when I leaned on it, so I thought it was a good place to put things I wanted to keep clean, and the cutting board (for cutting paper from the roll of acid-free rag I brought with me). 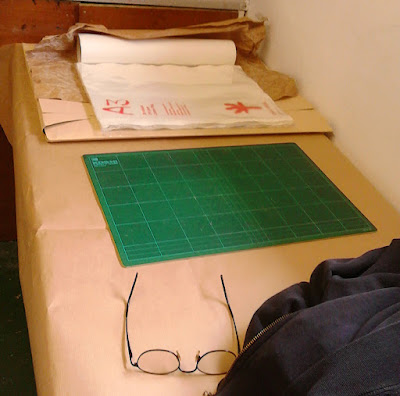 I put up a sheet of paper on the drawing board I brought with me, and unpacked some of the other materials: pastels, charcoal, inks, etc. I will use this table to work on drawings, but also to design and cut small woodcuts and lino blocks. I will wait till I am finished with painting, to convert that space to a printing area. I have not brought down my bookbinding materials yet, but I am planning to. This is really exciting for me to have many things to do and realising that I can leave something as is, ready to work on immediately the next time I enter the room! 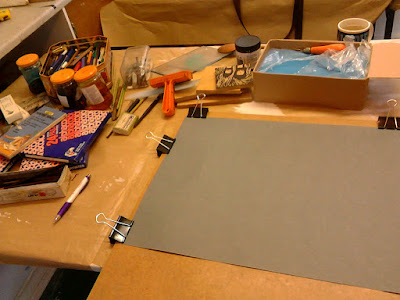 Posted by Lorraine Whelan at 08:11 No comments: