I feel like "Define the Line", IADT graduate exhibition, could provide a blog subject for some weeks to come. However, I will only discuss a few more artists and their works and leave Dún Laoghaire's art students till next year.

In the sculpture room display, one could not help but notice the huge, spider-like sculpture that imposed itself on the room. Spider sculptures have changed the art world forevermore, after Louise Bourgeois created enormous bronze works as symbols of the maternal instinct in all its ferocity and elegance. 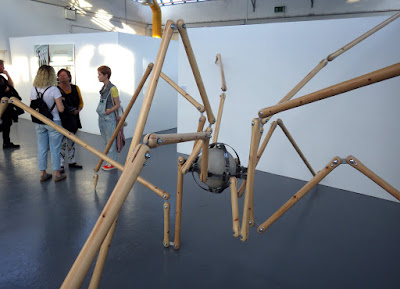 Ali Kemal Ali's "spider" is entitled Mind Map and speaks nothing of maternity. It sprawls, it moves (or has the potential to move), it seems more mechanically alien than natural despite the mix of well-crafted materials. Above all, it is beautifully made; a three-dimensional representation of thought processes. 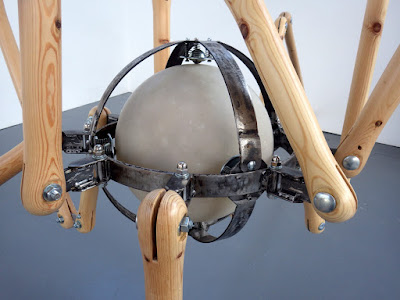 I was drawn away from the imposing Mind Map by curiosity: small boxes were justting from a nearby wall and I wondered what they were. 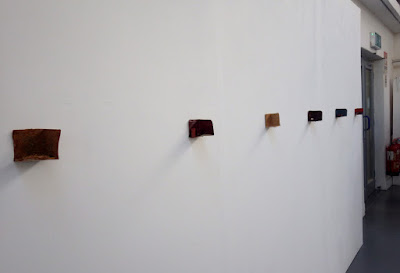 On closer inspection I realised that these intimate sculptures were only partial "boxes" -- tiny tableaux spaced along the wall so that one could engage with each individually. 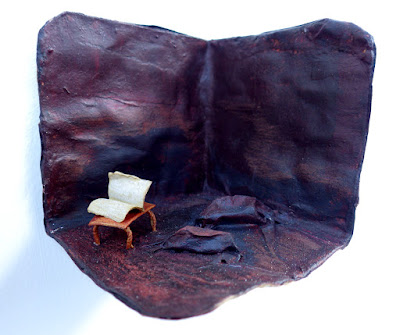 Tiziana Prigent-Piussi created tableaux that were meticulous, miniature sets; in my imagination they spoke of unknown stories. One of the sets was even devoid of furnishing such that it exuded the loneliness of an empty stage. When I returned to the exhibition a few days later for the student-guided tour I found out that these pieces, while strong enough as sculptures, were also used as sets for animations by Prigent-Piussi and I was somewhat disappointed  that none were on display. 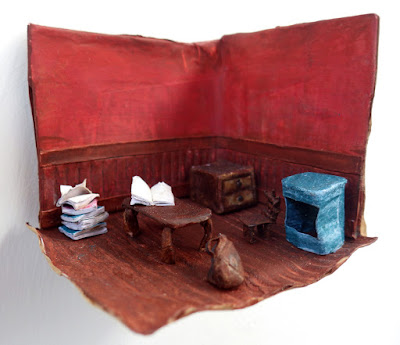 Another piece that I thought straddled dimensions of thought and theatre, was Trudie Mitchell's predominantly wall installation, Teaghrán. 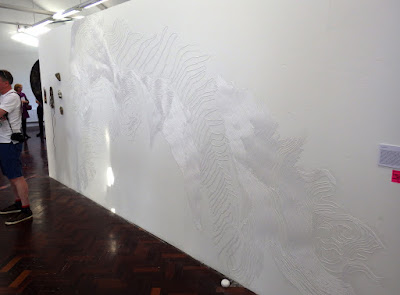 Difficult to photograph, this piece must have been created most impressively in situ, white cotton thread winding over the wall, creating permanence with glue (but a temporary piece!) it's patterns suggesting landscape contours, weather mapping, ley lines:  demarcations to represent meanings that are not visible to the eye, yet understood and known. 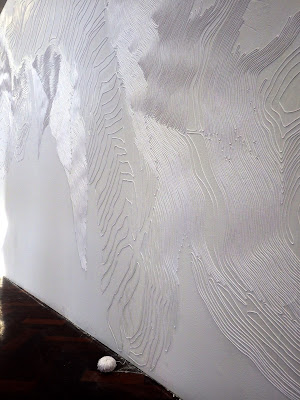 I had to look up the meaning of the Irish word used for the title and came up with "string" and "tether". While the first may be obvious in the material used, the second has more nuance to it as both a noun and a verb. 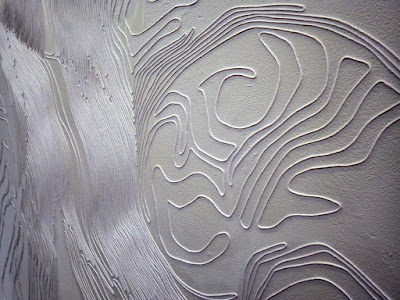 As I said at the start, I  have barely touched on the work that was exhibited at the IADT grad show. The work coming out of the art college is exciting and inspiring. The grad show is always worth seeing and exploring; an annual event to look forward to on the art calendar!
Posted by Lorraine Whelan at 09:04 No comments:

It seems like ages ago now, but there was quite a bit of good work at the IADT grad show "Define the Line" so I can't just let the blog last week be the sole representative of my musings! Although there was so much work worthy of discussion, I am just going to focus on three artists whose work straddles that in-between area of painting and sculpture, becoming installations in their own right. I was also especially interested in the materials used. 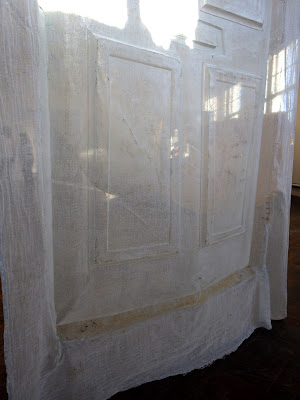 Sorcha Carey's work explored a variety of media (muslin, porcelain, paper) and architecture itself. I particularly was taken by her muslin works - material formed around a door and corner of a door. A complete ghost door hung from the ceiling as a challenge: did this apparition lead somewhere ethereal? What could it be a door to? The corner of a door frame formed on another piece of muslin was strewn on the floor, as if discarded. A fragment of an opening or closure. 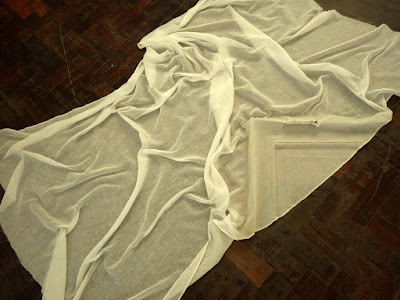 Suzanne Daly painted portraits of friends and family on translucent cloth that hung from the ceiling, banner-like. The portraits were stylised and engaging. Familiar as banners, they were celebratory in their ordinariness. 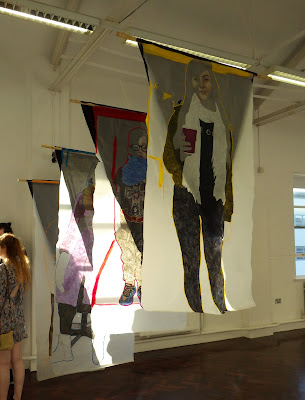 Zunaira Khursid painted motifs based on Persian floral designs. This installation of polythene is part of her Hijab series. Khursid works beautifully within the limitations of Islamic art in a contemporary fashion. The draping of the large piece of plastic across the room from the ceiling and continuing along the floor expresses a welcoming fleibility; the translucent material is like a modern veil - not a barrier - arousing curiosity for what is beyond but not clear. 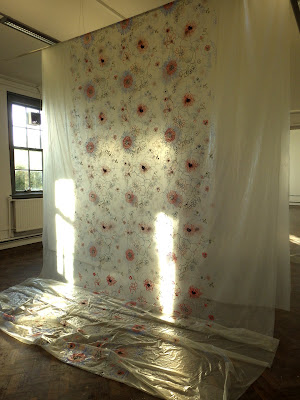 This is a temporary work - I have painted on plastic in the past myself: as the sun heats the floral designs, they will dry and crack and come away from the plastic ground. There is an element of pre-planned obsolescence and self-destruction in this work that is intriguing. 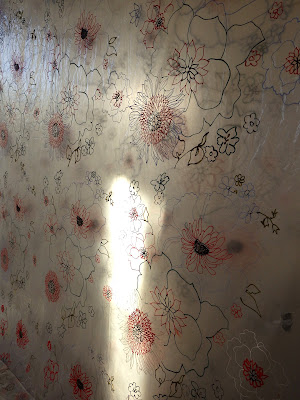 Posted by Lorraine Whelan at 13:08 No comments:

I attended the opening night of "Define the Line", the grad show of IADT Dún Laoghaire art students. As with most art opening nights, it is difficult to spend time with the work; one simply gets an overview. I was back at the college a few days later to attend a curatorial event, which included an optional tour of the show. I was happy to go on the tour, curious to hear what students would say about fellow students' work. 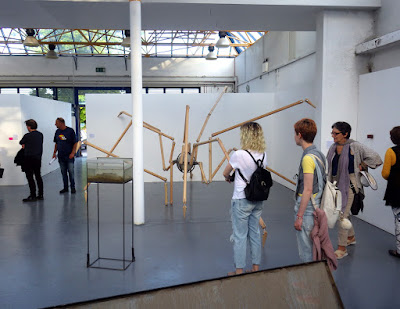 Given my return to some ceramic work in recent days, I was delighted that my "guide" was Emma McKeagney, who was sourcing clay for her sculptural installations and experimentations from her local area of Shankill (the next village north of where I am located). Though her work was collectively entitled "Glacial Till; removed, refined, dissolved, 2017" as if it were one installation with several elements, I had more of a sense that they were related works with similar concerns of time -- history lost and found. That is a big theme, but her clay works provide lots of meat for discussion; for instance, how the artefacts are moulded when left alone, their use, what they tell us, etc. There are material differences between the wet clay and the structure that shapes it (mild steel, white jersey, white yarn) but there are interesting differences between the wet clay in the mould and the dried bowl-form, which had been previously made in such a manner. 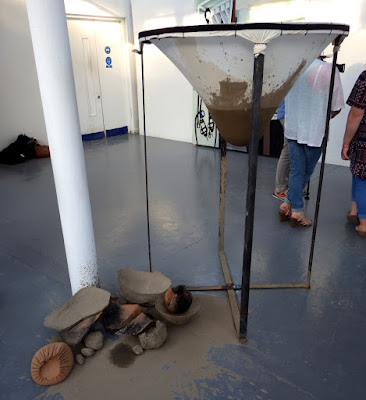 As McKeagney's work showed, time-based work does not have to take the expected media form one usually associates with it, i.e., film, video and photography. Several students were tackling the concepts of time and movement through sculpture. 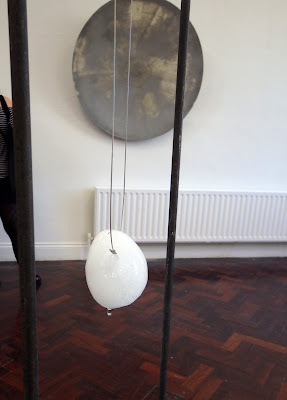 Lorcan McGeough also added sound into the mix of his interests. He had several large sculptures that resembled inner ear shapes, but I was intrigued by works that incorporated blocks of ice suspended over well-like structures: the ice would slowly melt and drips would create quiet, sporadic sounds that were dependant on how much melt had preceded them.

"Define the Line" was an exciting show of graduate art student work. There was much good work in the exhibition and I will discuss a few more of my favourite works in next week's blog!
Posted by Lorraine Whelan at 08:55 No comments: