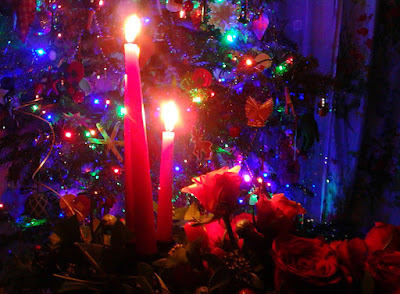 and all the best for a safe, healthy, creative, and wonderful New Year!

The xmas craft fair at Signal Arts Centre is in full swing! This year I submitted a lot of the pottery I have been making over the past year on Thursday afternoons in the ceramics workshop. In this photo six of my glaze-painted tiles, two of my draped slab "galaxy" platters, two raku vessels and a number of my handbuilt bowls are visible. The step display that the tiles are on was designed and made by my husband, James Hayes, and some of his terracotta landscape vessels are also visible on the steps. 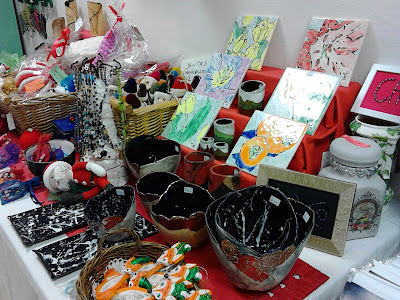 One of my floral wrap vases can be seen on this table, at the centre of the photo. Some of my husband's versatile mini platters (can be used for small amounts of sauces, hors d'oeuvres, chopsticks, used tea bags, oven-side utensil rests, etc) are on the left. 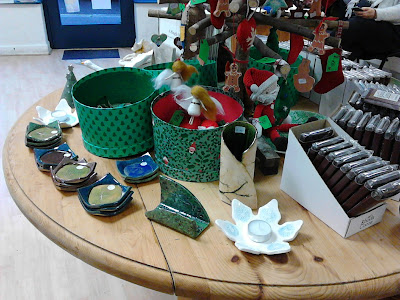 The craft fair is set up as a shop and there is a lovely smell of hand-made soaps on entering the gallery. Display cabinets have all been freshly painted. In this cabinet I can spot a few of my pieces: a floral vase and small ginger jar on the top shelf, a glaze-painted tile and handbuilt bowl on the lower shelf. 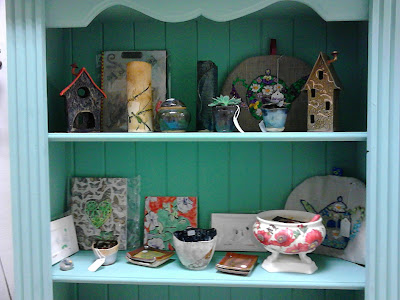 Several more of my floral wrap vases can be seen on another set of shelves. There is a huge variety of handcrafts in the fair, all reasonably priced. The annual Christmas Craft Fair at Signal Arts Centre, Bray, continues right up till xmas eve! 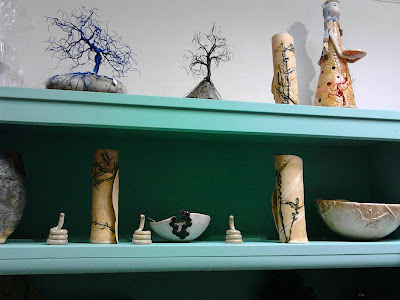 Posted by Lorraine Whelan at 10:16 No comments:

At the end of the seventh week in the studio, I finally finished my paintings. I was able to sign the larger one below a bit of scrim on the front, but for the smaller paintings I just signed the back as it would be impossible to paint my signature on the heavy texture which covered the canvas. On the Monday of week 8, I used the last piece of grey paper on which I had been doing pastel drawings. Though I could have brought more of that paper in, I decided that it was a good time for me to refocus. Besides, all the pastels needed a spray of fixative - so I did this at the end of each day before I left. 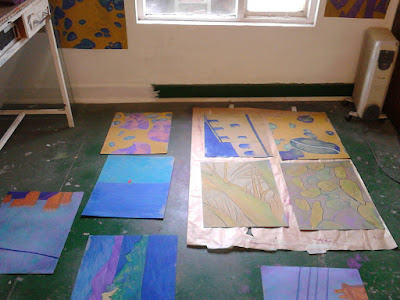 I took down all my reference photos and pastel drawings and hung up the finished paintings (and the canvas on the right, which had not been painted!). 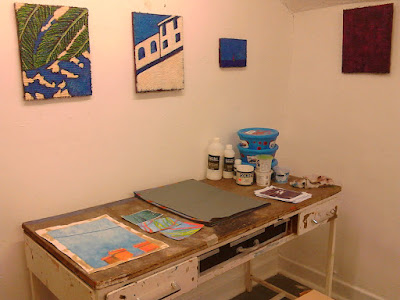 During the final three weeks I decided to stick to my routine of at least having three things that I would focus on daily. I continued doing a self-portrait in the morning and started a series of tiny watercolour pencil drawings. I had a small pad of Strathmore watercolour paper postcards. 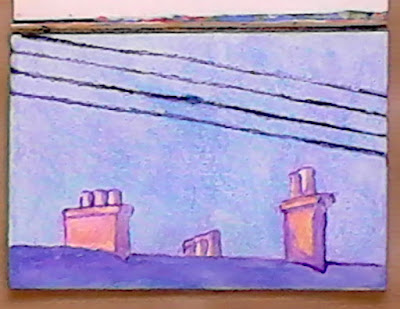 I was thinking of doing a series of drawings where I would use an eraser to draw on a ground of graphite. However, the toothy Fabriano paper I was using did not allow for a solidly dark ground and made it impossible to erase back to white. Though I was happy with the final drawing of persimmons, I decided not to continue with a series at this time. 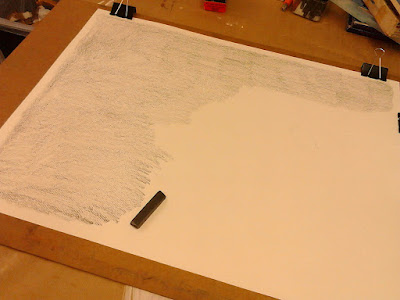 Instead, I decided my time would be better served by doing sketches for possible lino block prints -- a projected series for 2019. In order to get started, I taped several sheets of paper to each drawing board. 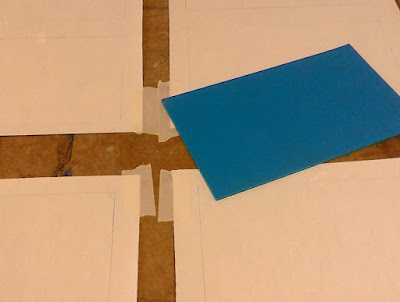 For the most part, I fitted two to-size drawings on each page. I realise that the more detail that is in the initial drawing, the more successful will be the final print. I am looking forward to continuing this work in the coming year. 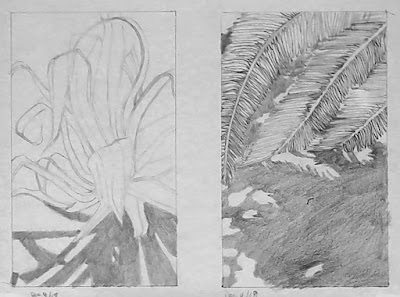 Posted by Lorraine Whelan at 08:50 No comments:

I set up a mirror in the studio, so one of the first things I did every morning was sketch a self-portrait while drinking a cup of ginger tea. I took this picture recently, so a full studio is behind me. As well as a selfie, for the first seven weeks of the residency I did a pastel drawing and worked on my "Antibes Paintings" daily. 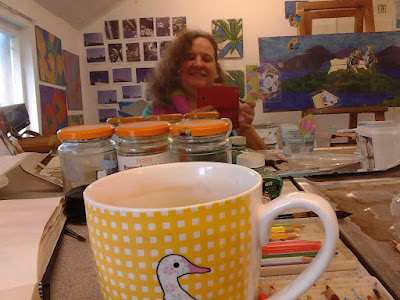 This is a November self-portrait in watercolour pencil. I have a tendency to squint when I attempt a smile at myself. 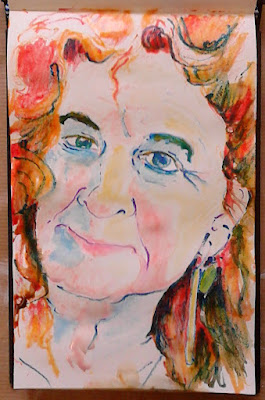 Before starting the residency at Signal Art Centre, I had prepared a number of canvases in advance with a heavy scrim texture and applied an undercoat of quinacridone violet. So I wasted no time in blocking my canvases once ensconced in the studio! 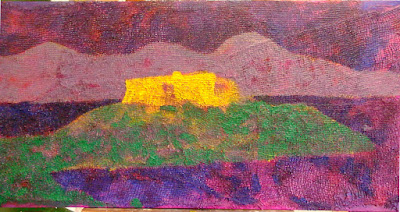 My paintings are always a slow build up of colour. 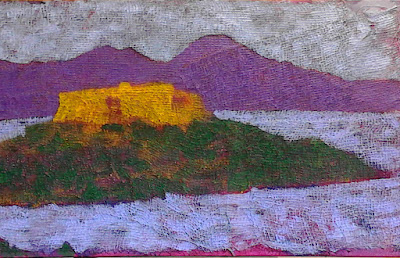 The largest canvas has its place on the large easel in the studio, but the small canvases would be on the adjacent table or hand held when I was working on them. 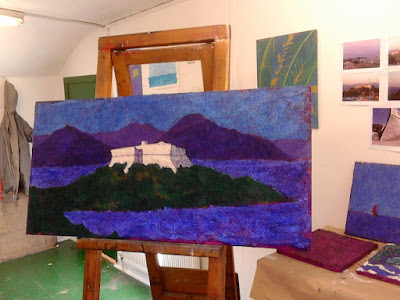 Posted by Lorraine Whelan at 00:46 No comments: