At the beginning of June I went (several times) to view the IADT Grad Show. I had had a chance to get to know the fourth year art students last November when I helped out with the "rollover" shows at Pallas Studios in Dublin. It was a double pleasure then to see the final works of these emerging artists and to see how their practices had developed in the intervening months.

I had previously seen photos of Mary McClelland's mixed media photographic installations (or wall mounted photographic sculptures?) but didn't realise until I saw them in person that the delicate framing is layered waxed paper. This was the centre piece of an alter-like triptych. 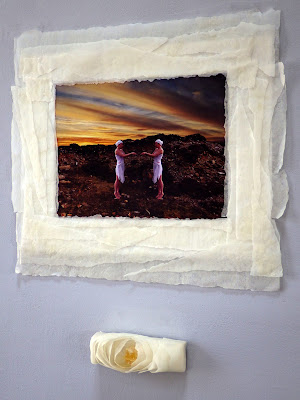 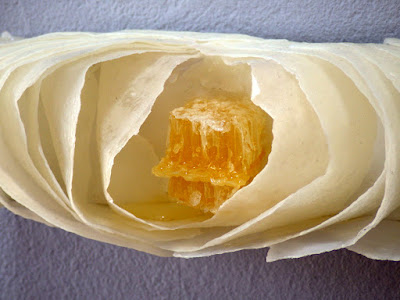 Since I consider myself primarily a painter, I couldn't help but take an interest in the paintings on display. There were three large paintings by Mateusz Lubecki, two of which can be seen below. 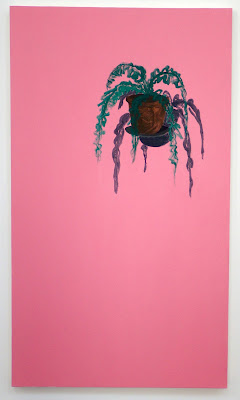 I was intrigued that Lubecki's paintings are both naturalistic and abstract at the same time! 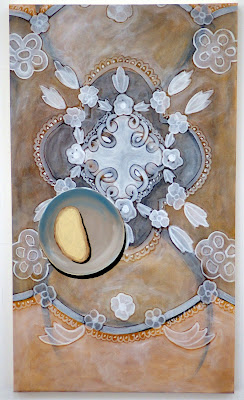 I was very attracted to the stylised and mysterious paintings of Jago Moulton. The loose brush work of the white and flesh tones played off and emphasised the flatness of the polka dot dress and the black hair and background. 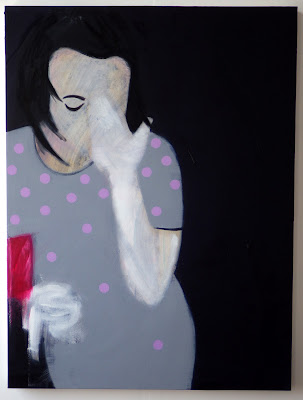 To me this painting is like a photograph from a dream - holding a memory and meaning that you can't quite get at to understand fully. I love it! 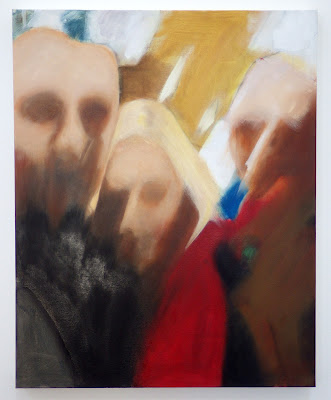 The exhibition contained all art forms and I have only featured a few pieces here by three grads, but a more comprehensive look at works in the exhibition can be accessed here.
Posted by Lorraine Whelan at 22:36 No comments:

Postcard 1916 was an exhibition of postcards, curated by artist Eileen Ferguson, which took place in The Old Post Office, Clones. Individual blank postcards were provided to interested artists to create small works in response to a specific word in The Proclamation or The Proclamation itself. The exhibition was a response to the 100th anniversary of the Easter Uprising. 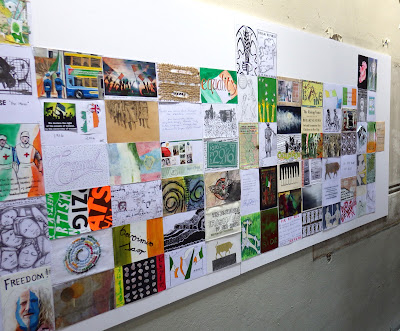 The wall of postcards, though at first daunting in its diversity and jumbled nature, became intriguing for this very nature. The cards were all so different showing an incredible individuality of response to the same theme. 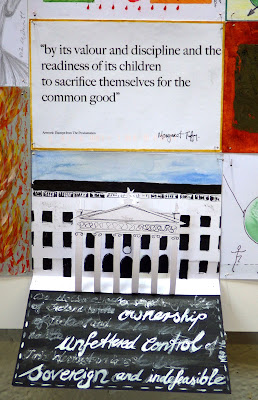 There was also a great variey in the media used for expression: photography, print, collage, encaustic, paint, cloth 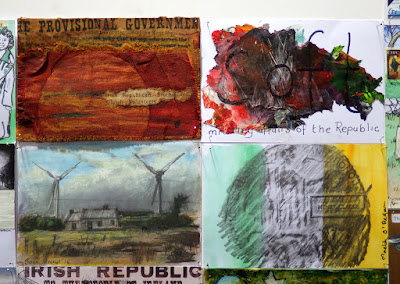 and any mixture of these materials. 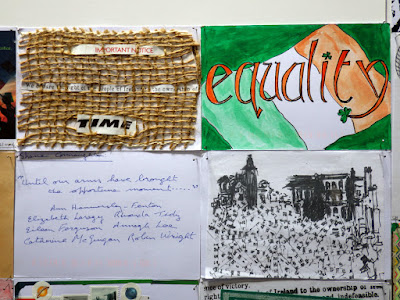 Artists responded using the language of The Proclamation, or in their own words. 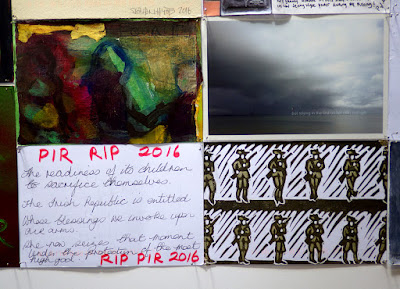 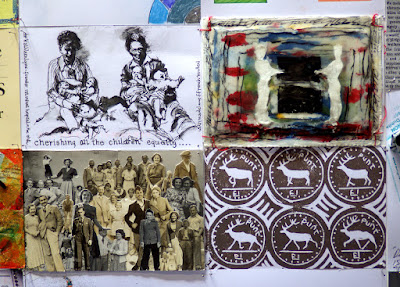 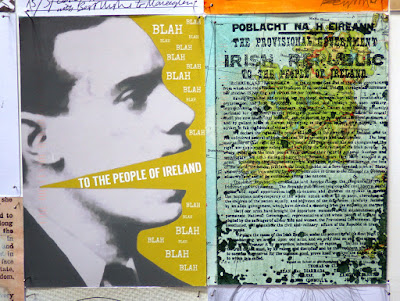 but one certainly gets an idea of the diversity in the exhibition. 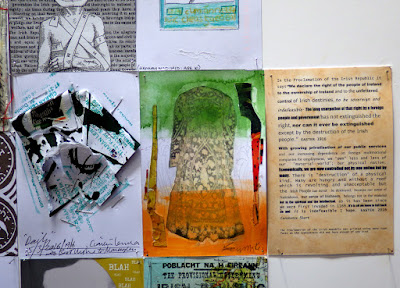 The exhibition will be packed up and brought to France for further exhibition in La
Vielle Poste, Larroque in August of this year. 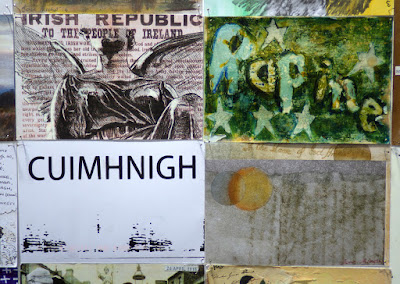 My own response (in situ below right) was a response to the word "children". I created a collage using ripped paper, an image of children collecting wood from the rubble of Sackville St (now O'Connell St, Dublin)  on a background of excerpts from my paternal grandfather's Witness Statement of his "military" activities leading to the foundation of the state. 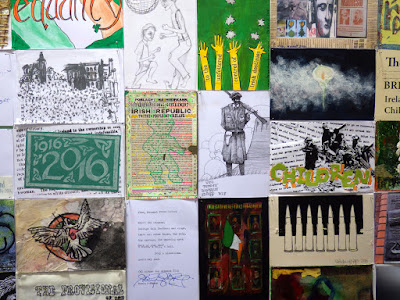 The postcard my husband, James Hayes, submitted (in situ, above centre left) is a lino print of the anniversary dates collaged onto a background of writing excerpted from The Proclamation. 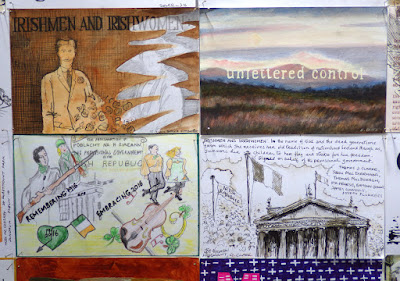 There were so many interesting responses, it is impossible to showcase them all. The curator of the exhibition, Eileen Ferguson, was delighted with the response -- receiving postcards not just from Ireland, she also received cards from Canada and Germany. Ferguson also spoke of the range of work received and interest from both amateur and established artists, as well as enthusiastic responses from children and young people who had participated in some workshops. 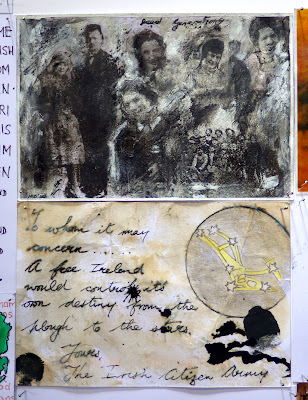 Posted by Lorraine Whelan at 13:07 No comments: 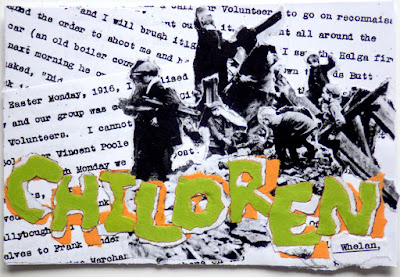 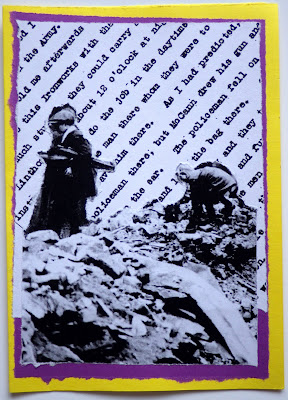 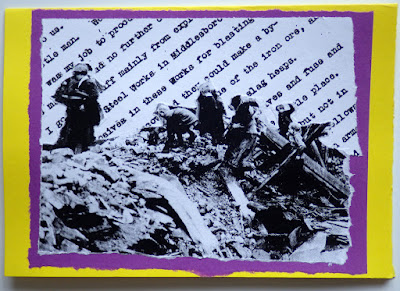 The Postcard 1916 exhibition will be displayed again in La Vielle Poste, Larroque, France in August and  The General Post Office (GPO), Dublin - which was the HQ of the rebels in 1916 -is interested in acquiring digital images of the works for their archives.
Posted by Lorraine Whelan at 18:19 No comments: