Before xmas one of my classmates told me about pasta machines being used as small presses for printmaking and I was intrigued! A google search gives you all the information you need, it's really very simple: the pasta machine acts as a press for small works. Follow all the usual steps for printing. Here felt is cut to size for the pasta machine. 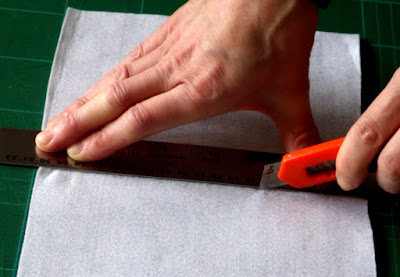 Paper must also be cut to size. 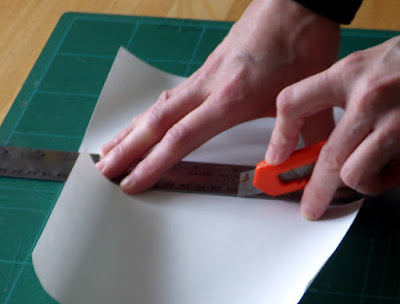 Soak the paper and blot dry. The time for soaking varies depending on the weight of the paper. It should be damp through for printing. 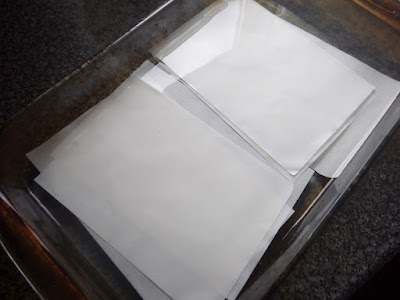 Use a perspex or glass surface for spreading ink. 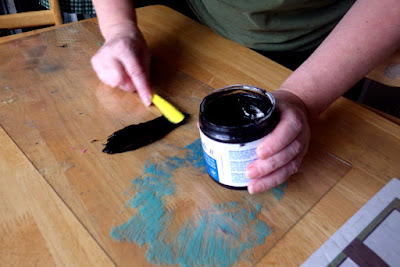 Roll out the ink evenly before rolling onto your printing plate. I was using an engraved copper plate as the test. Once the ink is rolled on the plate, it must be wiped off leaving the ink in the engraved lines on the plate. 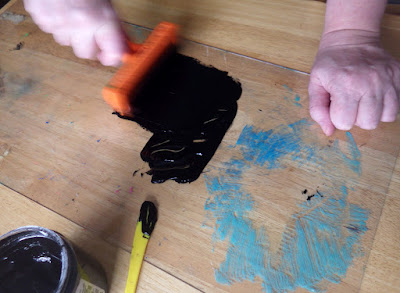 A felt, paper backing (so felt does not get dirty from the plate), plate, printing paper, felt sandwich is fed through the press. The whole sandwich is then caught at the bottom. My pasta machine needs to be modified a bit at the base, so that the plate sandwich does not get stuck between the table and the machine when making its exit. 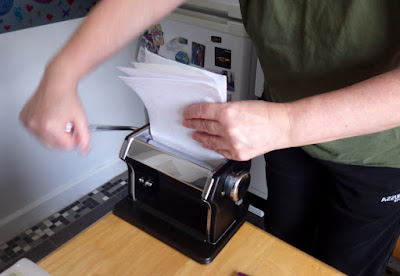 Some experimentation is needed -- I started off on the most open setting (7) and there was not enough pressure on the plate. 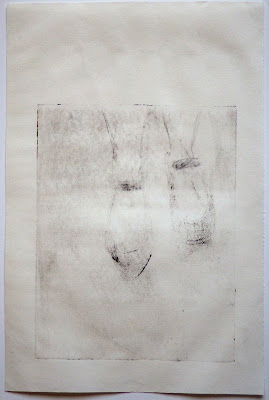 I moved down to setting 3 and there was too much pressure, hence the crease in the paper. Though it is not as easy as I expected, I will do some more work on it -- I am pleased though with my new press! 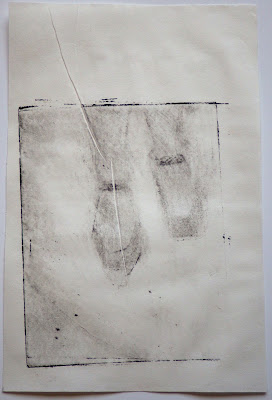 I thought I would post some more pix from the so-called Grey Box Archive -- the box of small scale drawings & sketches that I re-discovered a few months ago. All the work in the box I had completely forgotten about, or if I had remembered any of it I thought I had destroyed ages ago. The following sketches are all based on dreams, all of which I remember having while in Ireland, except perhaps the last one, based on several dreams I had in Toronto in the summer of 1983. 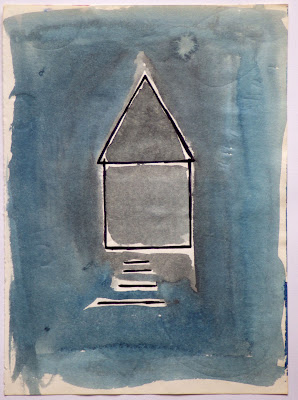 Sketches above and below are from the same dream, about the house I grew up in Toronto. I remember having this dream while visiting my parents in Ireland during the summer of 1984. 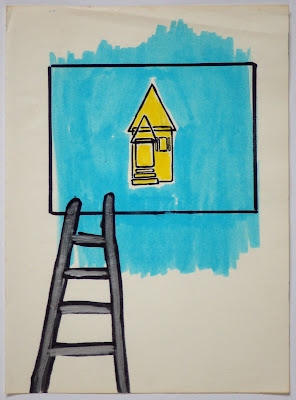 I remember this being a very bright and chaotic dream -- moons and pink balloons seemed to be having an attic party, I came upon the party via a trap door in the floor (apparent on the left middle side of the drawing). This was another dream I had during that summer visit to Ireland in 1984. 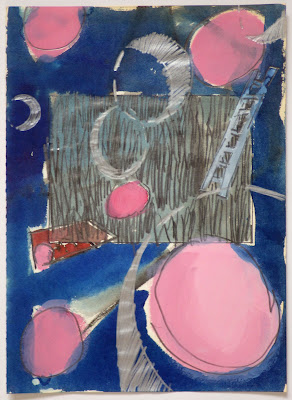 Another moon dream, with a temple and journey to boot. Who knows. I think this was from either the 1984 holiday in Ireland or a later visit to my parents in 1987. I know I did the next two dream collages while in Ireland, possible when I had moved over in 1988.

The plane crash on the island did not refer to the Lockerbie disaster, though that event might have prevented me from sending this in the post as it was around that time.

In 1983 I had a series of dreams about dolphins, one of which was a group of dolphins leaping in turbulent waters. I then had a dream where figures were bouncing, foetally, in turbulent waters as an exact echo to the dolphin dream. I used these images of dolphins and foetal figures in water for many years in paintings and drawings. I started using the separated raining clouds after viewing clouds like this over the sea in Ireland in the late 80s and continued with that imagery (as gold rain) in many paintings and drawings between 1988 and 1992. 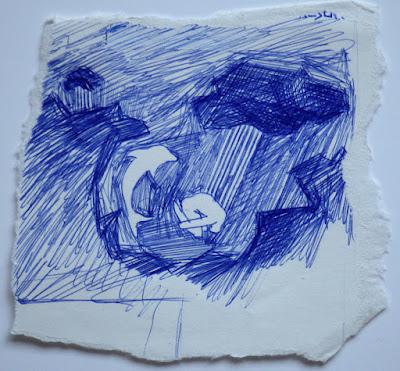 Posted by Lorraine Whelan at 08:18 No comments:

While I was at the National Gallery just over a week ago, I also had a good look at the current exhibition The Pathos of Distance. The sculptural installation by Sarah Pierce was commissioned by the ESB Centre for the Study of Irish Art (NGI) and created as a response to international archive collections of images relating to the Irish Diaspora up to 1915. I wanted to see the exhibition myself as it is relevant to some of my own current research. 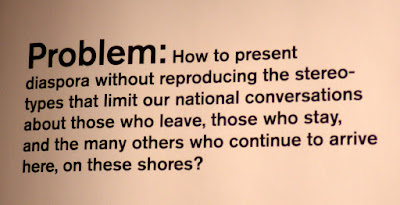 The exhibition consisted of three rooms with central displays of configurations of furniture acting as platforms for the display of 1:1 reproductions of relevant images from the international researched archives. 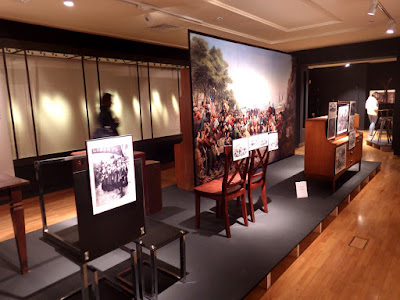 The walls are lined with didactics, very readable in their note-like and/or quotation form. 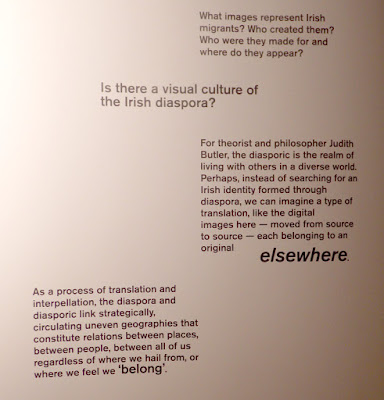 All the images are pre-1915 and I was not totally sure of the significance of the post-1970 furniture, though I thought it may refer to the fact that the idea of Irish Diaspora is not static - emigration - "the brain drain" continues in waves, at the whim of the up and down economy of this island. 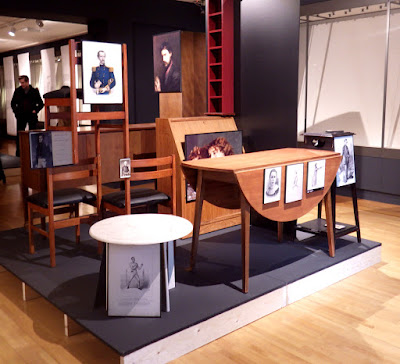 A reading-resource area was set up as a "lobby" outside the exhibition rooms. 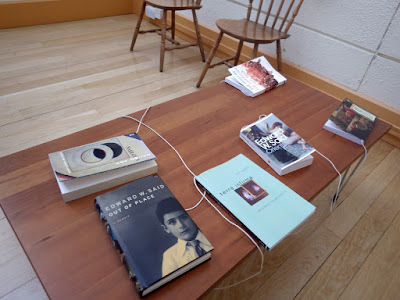 The exhibition included a free brochure with an essay by Donal Magure, the exhibition curator, for further information on the Irish Diaspora and research project itself.
Posted by Lorraine Whelan at 10:13 No comments:

Happy New Year! And Happy Nollaig na mBan - it's "Women's Christmas" today in Ireland. This is a tradition mostly celebrated in the West and rural areas but as I lived in rural Kerry for 3 years, I always celebrate it as an anti-xmas -- we have a "Merry un-Christmas" today as the decorations will be taken down. Nollaig na mBan usually is celebrated with women having get-togethers to make up for spending so much time in the kitchen during the holiday season.

In the Dublin art world though, the new year means only one thing: Turner's watercolours are on display again, Hurray! 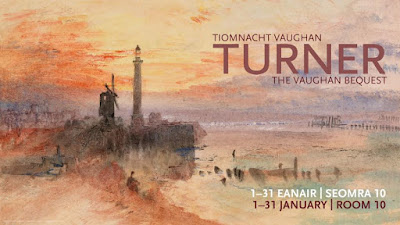 The Vaughan Bequest, 31 beautiful watercolours spanning JMW Turner's lengthy career, were given to the National Gallery of Ireland in 1900 with 2 stipulations: they would only be displayed in January in order to prevent light damage and that the public would never pay admission. The watercolours arrived in Dublin in a bespoke cabinet that the framed pictures slid in and out of like drawers. This picture shows what the framed pix look like on the walls. 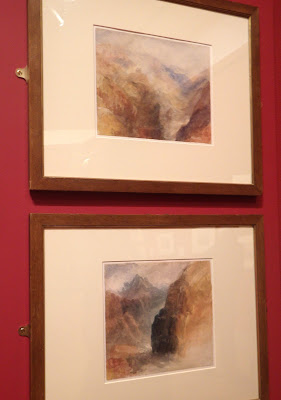 I like didactics that give extra information. This didactic is for the two waterolours above. 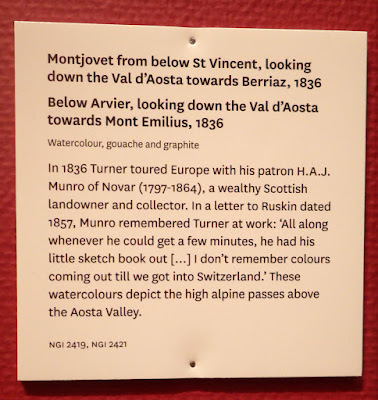 The next three pictures are from the Vaughan Bequest and on display in the exhibition. They are most certainly better photos of the paintings than my in situ pictures! 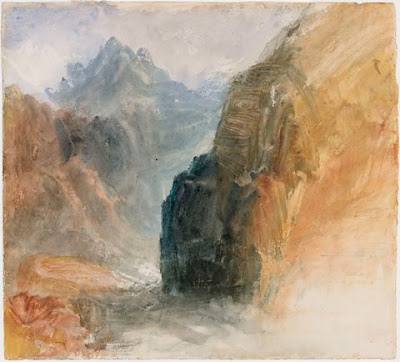 Below Arvier, looking down at the Val D'Aosta towards Mont Emilius, 1836, JMW Turner (Photo NGI) 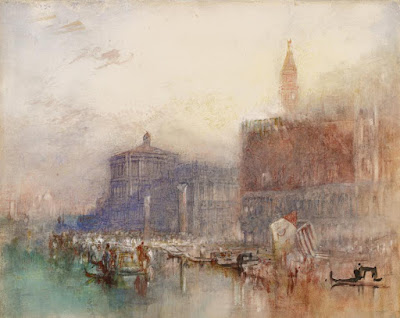 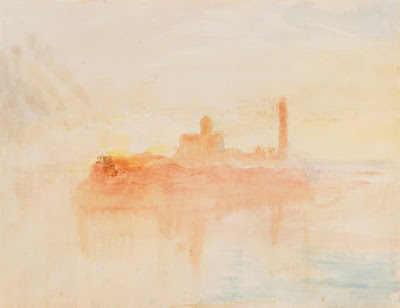