Over the past year or so I have been happily using watercolour pencils while doing sketches en plein air. A friend in Canada who was aware of these sketching forays asked if I had tried watercolour pens; I was curious as I had never heard of these before. When I was in Toronto in July and met this friend for coffee, I was delighted at her gift for me -- watercolour pens. Their nibs are actually brushes of varying thicknesses and they have a reservoir that you fill with water. They are perfect for outdoor sketching in conjunction with watercolour pencils. 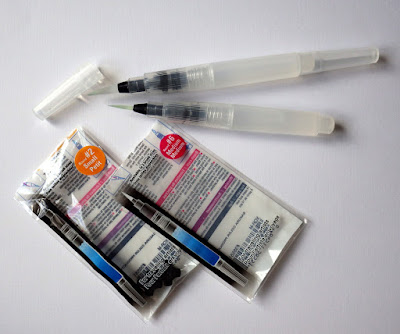 As with most things, the watercolour pens take some practice as you must squeeze the reservoir gently for the water to flow into the brush-nib. Squeeze too hard and you get a blob of water where you didn't want it! This sketch is of the wild roses in our front yard. using pencil, watercolour pencils and watercolour pens. 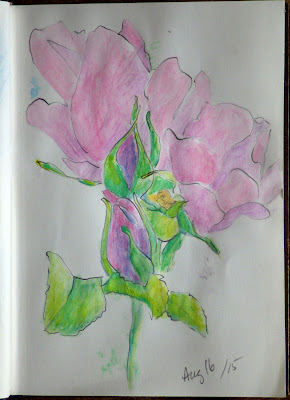 On Sunday just past, I attended a calligraphy workshop in Ashford as part of Heritage Week. Another new implement of which I was previously unaware is the calligraphy pen. I have done calligraphy with metal pen nibs & holders and reed pens but had never come across this simple chiselled marker purpose-specific. The woman giving the workshop considered it a beginner's no mess-no fuss tool; beginner or not, I really liked using it! 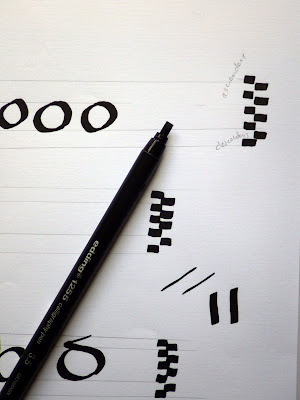 Posted by Lorraine Whelan at 13:22 No comments:

Last week I was up at Brú na Boinne, near Drogheda, visiting Knowth and Newgrange prehistoric passage graves. They are magnificent neolithic sites, older than both the Great Pyramid at Giza and Stonehenge. At the entrance to Newgrange the tour guide pointed this megalith out as probably the most photographed stone in the world. He was probably right. The carving is quite beautiful and mysterious. There is one other tri-spiral carved on a stone at the end of the interior passage (no photos allowed inside). 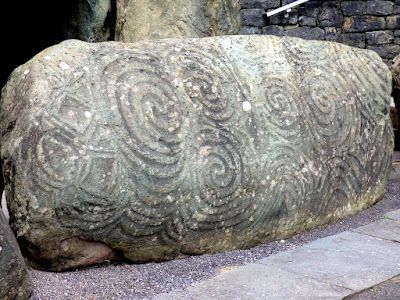 As with the megalithic kerbstones at Knowth, I was completely fascinated by the Neolithic art from more than 5000 years ago. 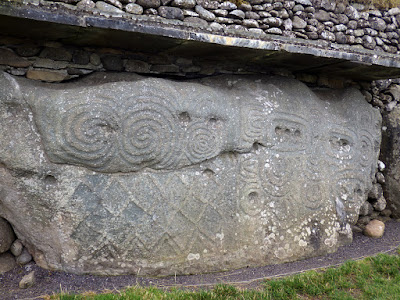 There is no final agreement between archaeologists about whether the designs are scientific, religious or linguistic. It's anyone's guess as to what was going through the minds of the prehistoric makers. 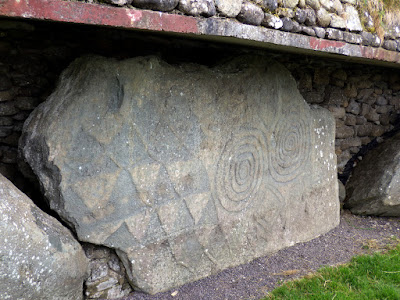 Around the passage grave at Newgrange there is also a stone circle. The tour guide didn't say anything about it this time, nor do I fully remember from previous tours of the site, but I think the circle came later, so time-wise is comparable to Stonehenge and Avebury, which I have had the pleasure of visiting many years ago. 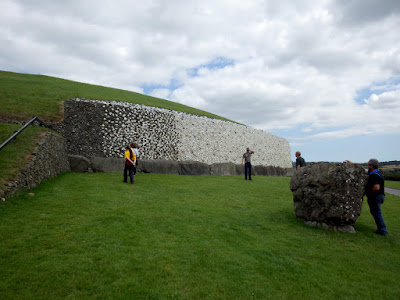 Some years ago the tour guide had implied that the placement of the sea-rolled grey stones and the white quartz that form the facade of Newgrange were entirely made up. This time the guide gave a plausible reason for the pattern, which would be quite startling to prehistoric viewers; the archaeologist Professor MJ O'Kelly had done numerous experiments on the patterns formed by fallen rocks before meticulously deciding each stone's placement on the facade. 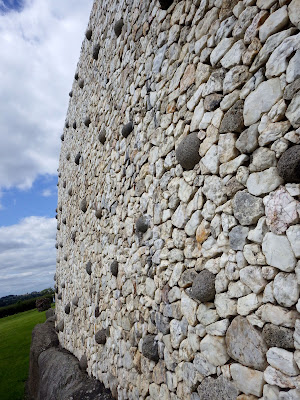 Since I had been to the nearby site of Knowth earlier in the day and seen the jumble of sea rolled grey stones and white quartz (neither of which are local stone) surrounding the largest monument there, I could imagine O'Kelly's reconstruction rationale. Although the tour guide at Knowth suggested that the stones may be to form a path rather than a facade, I couldn't imagine walking on these lumps! 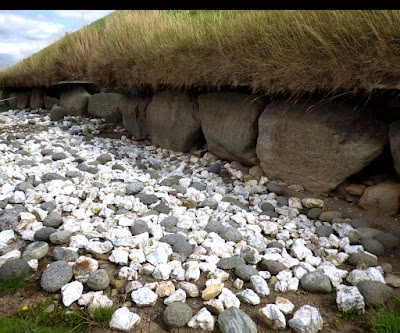 Yesterday was the perfect day to explore Brú na Boinne - the passage grave monuments in the Boyne Valley, Co. Meath. I had last been to Newgrange and Knowth in 1997 and a lot has changed at Knowth especially. Nearly 20 years ago this site was still in a state of discovery -- maybe that is an understatement as I am sure there will always be something new to discover there -- but there were no didactics or guides, one just simply walked among the ruins looking. Though there is something magical about doing just that, the "cleaned-up" site allowed for better understanding of what one was looking at. So the view from the entrance of several tumuli overshadowed by the largest passage grave (bigger than Newgrange) begins the enchantment... 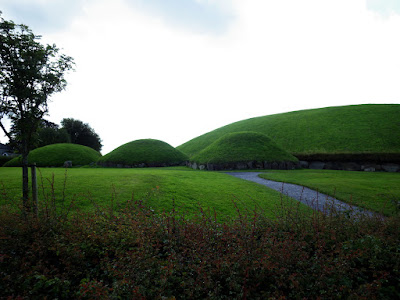 This is one of the smaller passage graves being singled out so that its structure is obvious: the opening to the passage is visible behind the entrance stone and kerbstones (megaliths) can be seen surrounding the mound. 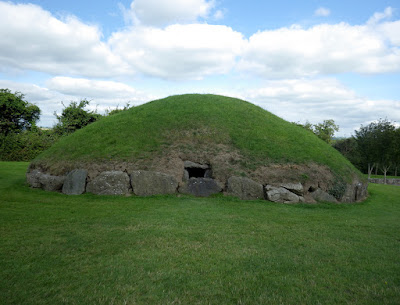 I was most fascinated by the wonderful examples of Neolithic art! The huge kerbstones of the largest mound were all carved. 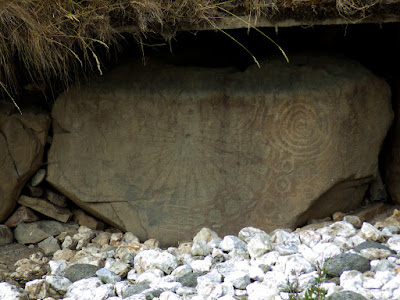 The drawings are all abstract and it is completely unknown whether they are a form of writing, religious symbolism or scientific/geographic symbolism. 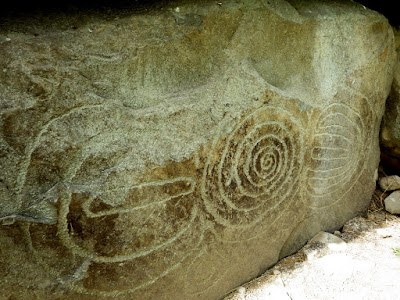 The architecture of these mounds is so advanced: dry stone building which doesn't leak, corbelled roofs over cruciform passages and all covered by several tons of soil and rock which has lasted  for 5000 years... With this in mind, personally I tend to think of the drawings on the most advanced level possible: some kind of symbolism which blends science, geography and religion to have real meaning for the people who created these amazing structures. 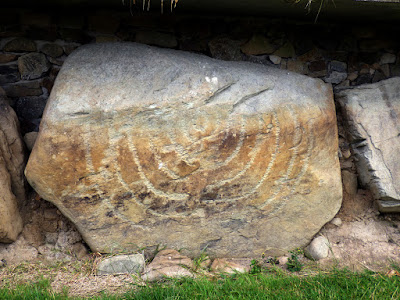 The very exciting thing for me was to see the tool marks of design creation and to be able to run my fingers through the grooves of these prehistoric drawings. 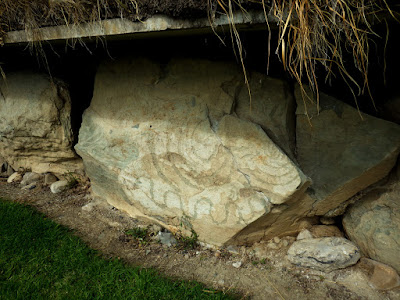 Posted by Lorraine Whelan at 17:05 No comments:

A few weeks ago I spent the day in Dublin catching up on exhibitions that I wanted to see. At the National Gallery of Ireland, there is a new way of displaying a most beloved and delicate painting of FW Burton's. "Hellelil & Hildebrand, The Meeting on the Turret Stairs" is on view at the ESB Centre for the Study of Irish Art on Monday & Wednesday morning only, through a free, but timed, ticket (available at the information desk). The last time I had planned to see this painting the viewing box was closed, so armed with my timed ticket I was delighted at the almost private view. 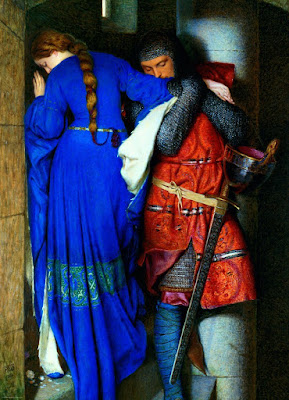 At the NGI I also saw the Sean Scully exhibition in honour of his 70th birthday. It was great to see the large canvases, especially the multiple canvas "window" works. A room full of Scully's b&w photographs was a very pleasant surprise, as I also share his obsession with stone walls in Ireland. 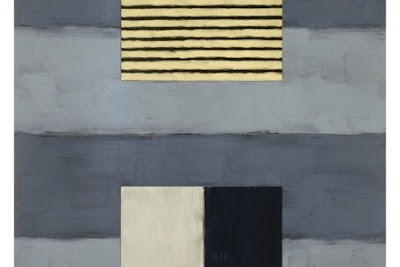 It is always nice to pop into the nearby National Museum of Ireland. There was an exhibition on Brian Boru and the battle for Dublin. You learn something new every day! Also in the vicinity is the National Library of Ireland. On the recommendation of a visitor I went to see the very meaty WB Yeats exhibition. This was my first time in the NLI and I was surprised at the size of the exhibition space. Since the collection and displays were manuscript based, the lights were very dim. However, I don't think conservation was really the top priority as a single spotlight focused in the centre of this painting by Edmund Dulac of WB's wife George! I don't think the spotlight was good for the painting but I was also disappointed that it was displayed on the top shelf of a display case so that it was out of my viewing reach. 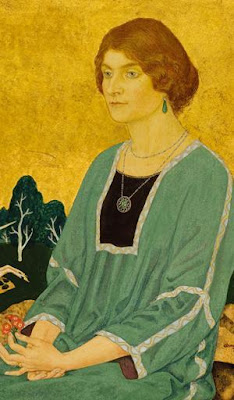 In the afternoon I went over to the Irish Museum of Modern Art (IMMA) specifically to see the Etel Adnan exhibition. I had read about Adnan a few months ago -- she is a 90 year old painter and poet who is only finally getting some recognition lately! 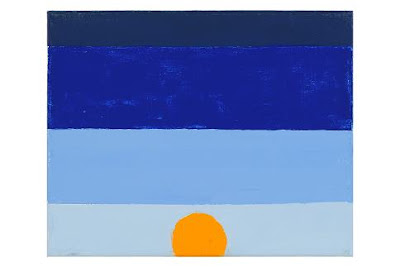 While at IMMA I also took the opportunity to see the Stan Douglas exhibition "Mise en Scene". 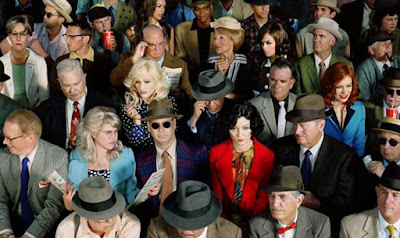 Posted by Lorraine Whelan at 14:36 No comments: