I just recently finished Margaret Atwood's "In Other Worlds: SF & the Human Imagination" and had to find a place for it on the bookshelf.  Were there ever a lot of Atwood books already there!  I guess I like her writing, which I was first introduced to back in 1978 or '79 when I read The Edible Woman.  Reading everything between the covers of In Other Worlds, I discovered that "Oryx & Crake" and "The Year of the Flood" are part of a trilogy.  How did I miss this?  Mr Google helped out:  "Maddaddam" is due to be published in September of this year.  Yay! 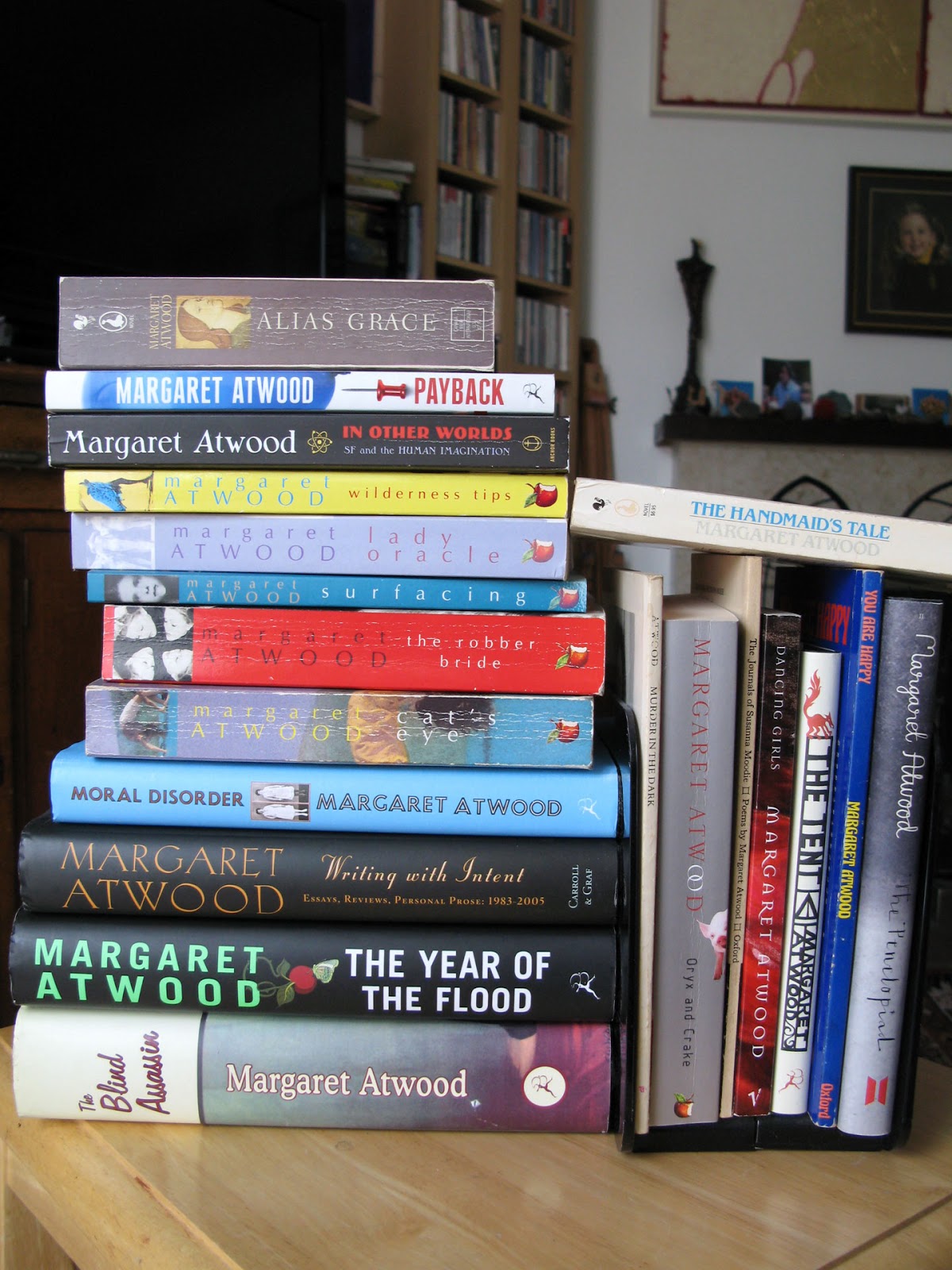 In addition to my own reading, I and James (my husband) read with our ten year old daughter nightly.  At the moment we are having quite a laugh reading Salman Rushdie's "Haroun and the Sea of Stories".  This was a book I picked up more than 20 years ago at the PEN benefit in Toronto, when Rushdie made his first public appearance after being in hiding for several years.  It was certainly a night to remember, though I was terribly worried that the whole of Canadian literature (every living Canadian writer I had heard of, and then some, were standing on one stage to welcome Rushdie) could be wiped out by some mad person in the audience.  Happily it didn't happen.
Posted by Lorraine Whelan at 09:36 No comments:

I finished another three paintings in the Moments series and signed them a few days ago (which means they ARE finished!).  They are acrylic washes on canvas.  This one is entitled Together and is 36 cm x 37 cm. 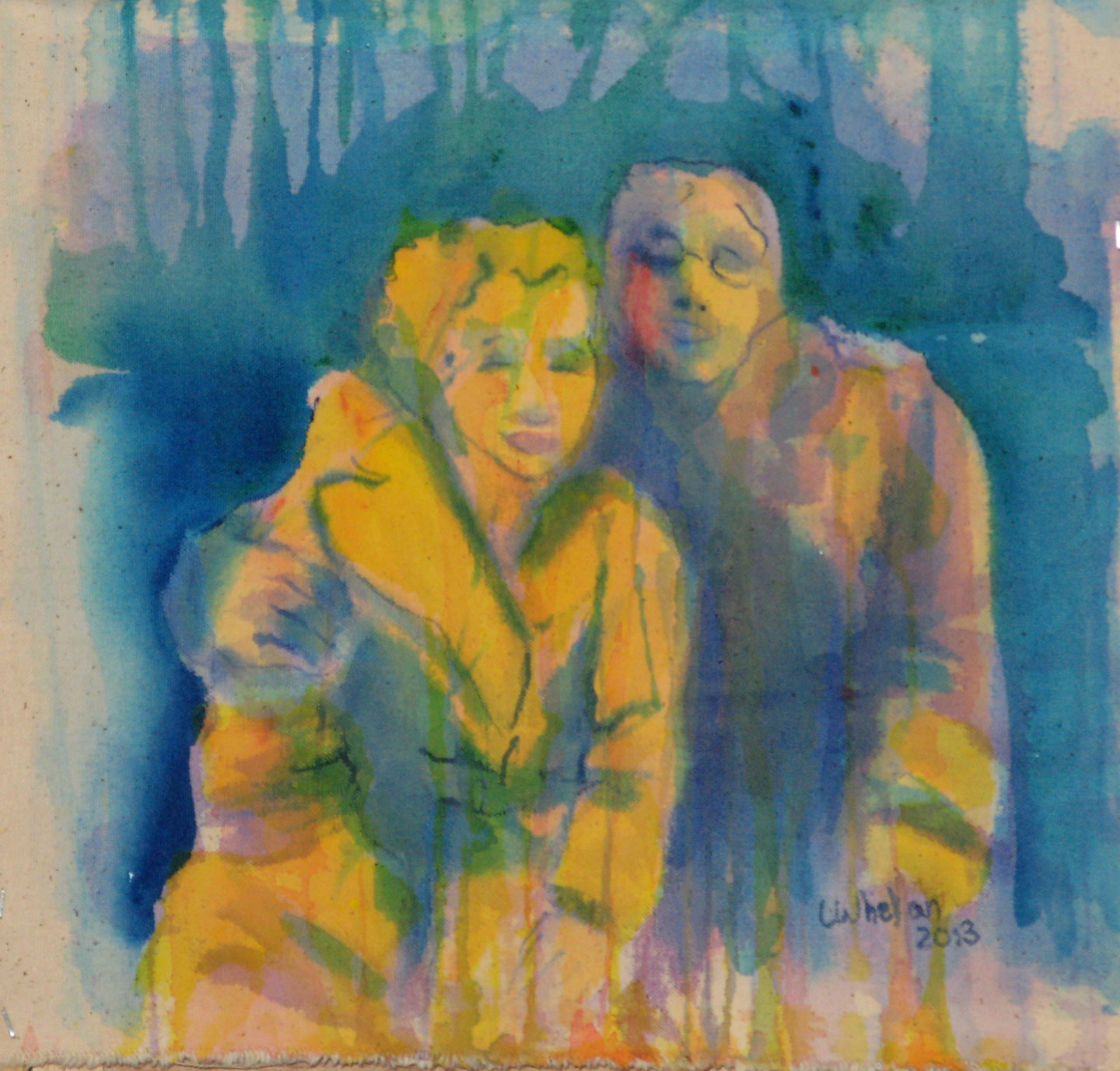 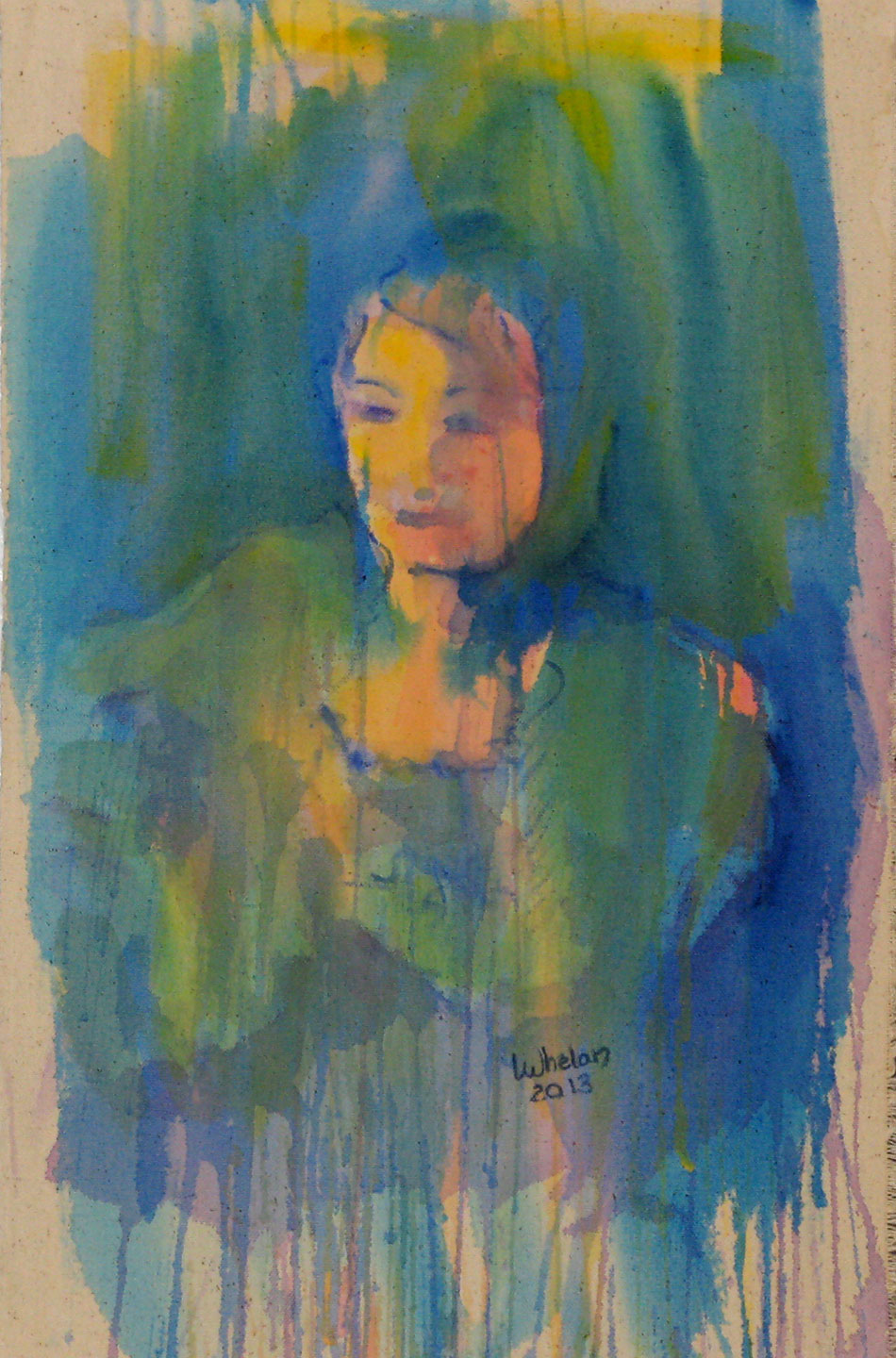 This is entitled Army Dreamer (thank you for the title, Kate Bush!) and is also 56 cm x 36 cm. 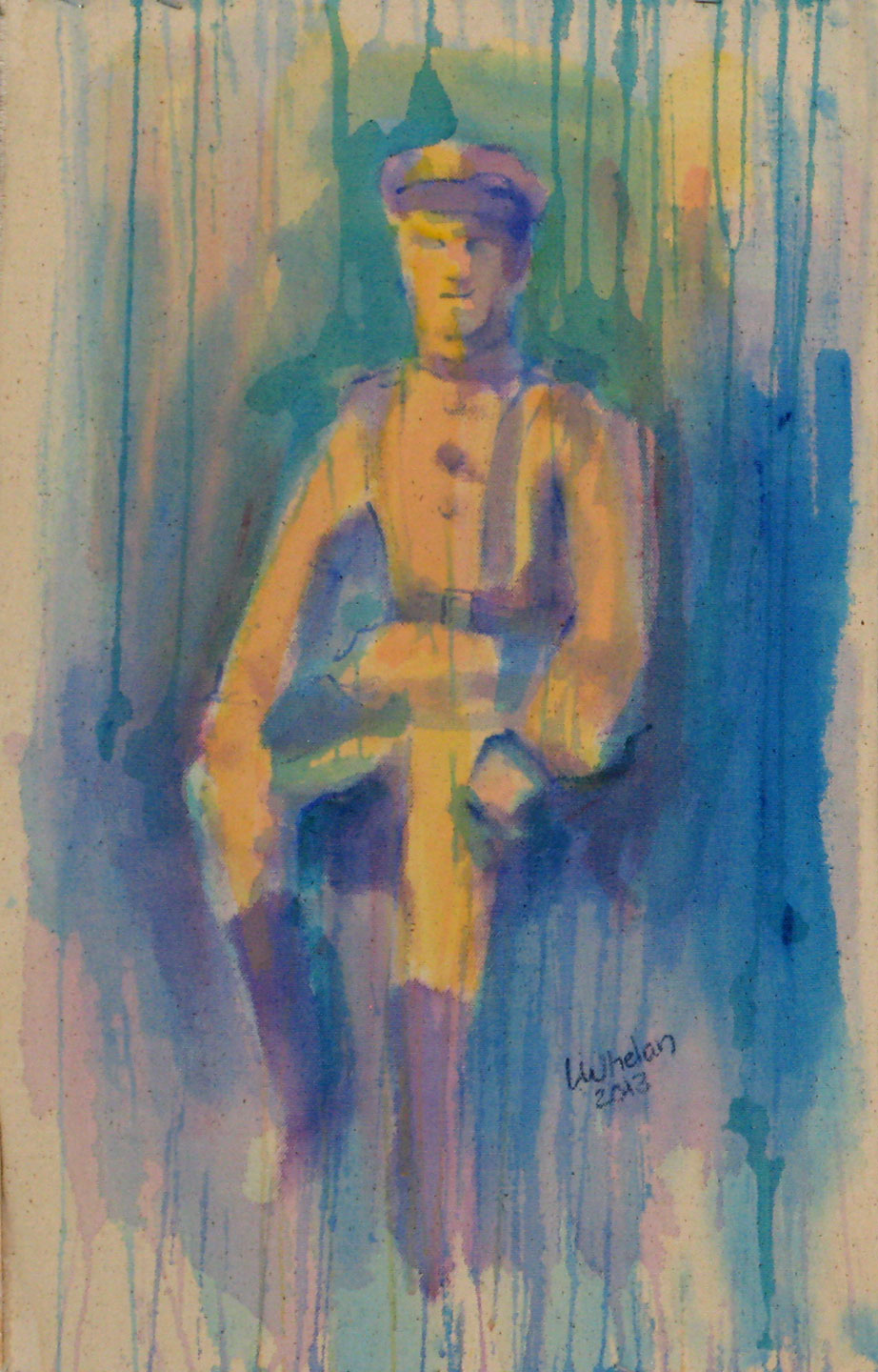 Posted by Lorraine Whelan at 10:53 No comments:

Last week Fion Gunn (the main organiser of Irish Wave) posted some photos to dropbox to give the artists involved in the various shows an idea of what the shows looked like -- I don't think too many of the artists were able to go to China for the launches. 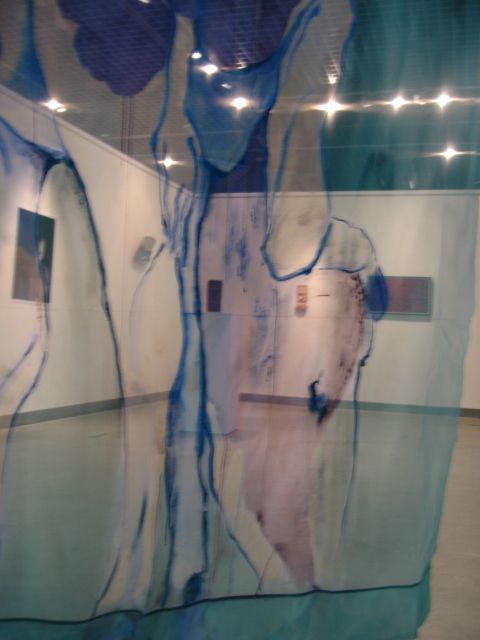 I am glad my cow curtain was free hung so that one could walk around it.  I like the shots of people at the exhibition seen through my curtain.  Fion also set up a FaceBook page for Irish Wave, now listed on my sidebar.  She posted separate albums for each venue, and there are 39 photos of artwork in situ at the TuShanWan Art Museum, Shanghai (there were two shows there, Gather and ReMade). 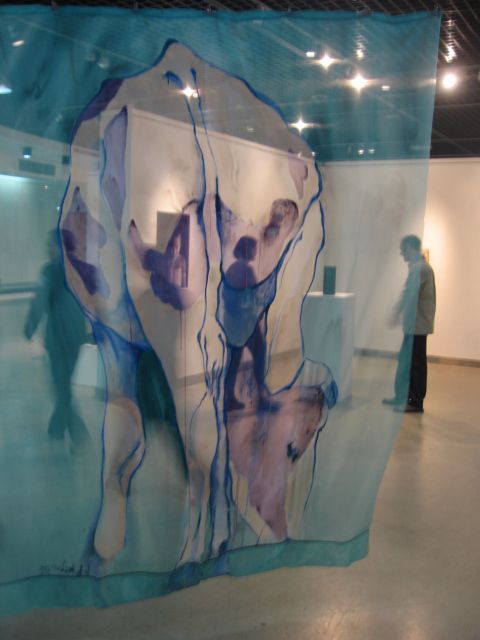 Posted by Lorraine Whelan at 15:48 No comments:

After Easter I went to Prague, to both visit relatives and to see the sites again (it has been a few years since I was there).  This is a typical view of the castle above the Vltava River (also called the Moldau).  The castle complex also includes St Vitus Cathedral, whose spires can be seen. 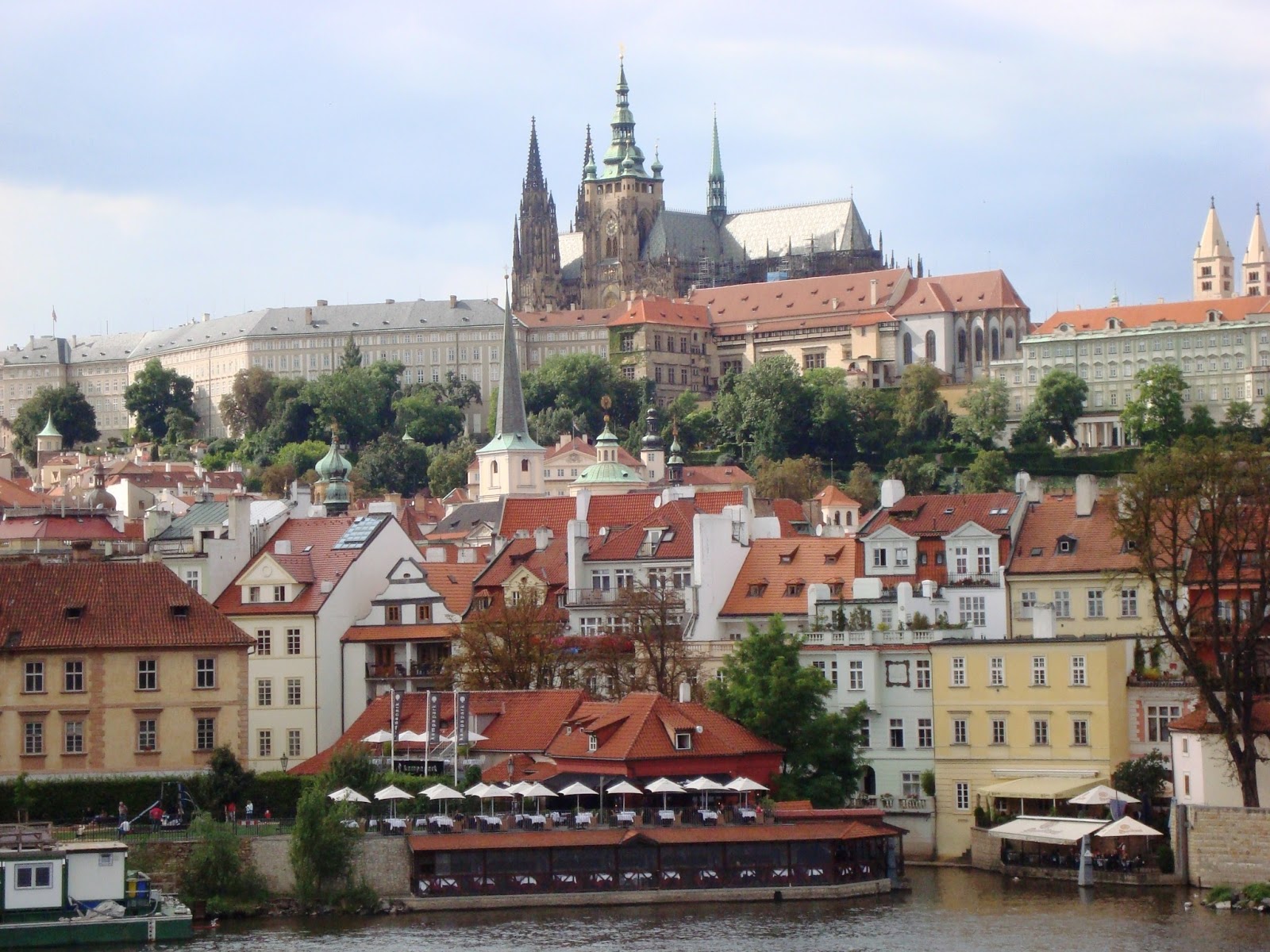 I went on an introductory tour of the city (which included coach, boat and walking tour), so I got a good sense of the four historical towns -- Staré Mêsto (Old Town), Hradĉany (Castle Town), Malá Strana (Lesser Town) and Novo Mêsto (New Town).  The first time I had been to Prague (1992) I also got a sense of the Communist-era outer city, which I don't need to explore again (very ugly block buildings outside the historical centre).  The building below is called The House by the Minute and is adjacent to the old town hall and astronomical clock tower in Staromêstská (Old Town Square).  This beautiful building with stunning black and white sgraffito-painted facade was Franz Kafka's childhood home. 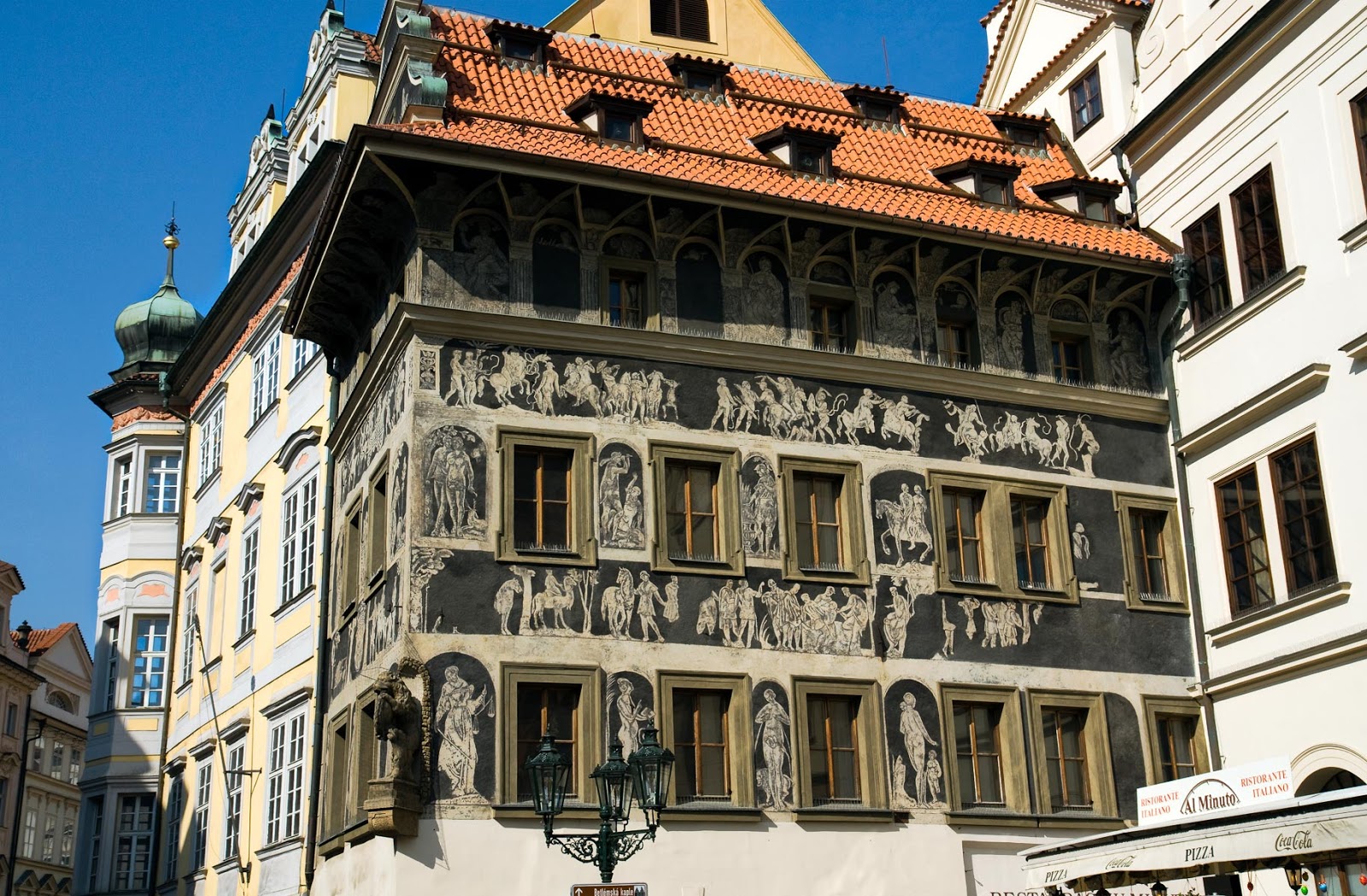 The astronomical clock -- still accurate after several hundred years -- is a thing of wonder, as well as being a major tourist attraction.  Every hour, on the hour, small doors open above the main clock and there is a parade of carved wooden saints.  The skeleton on the side of the clock also shifts his hour glass so you can be more aware of your mortality... 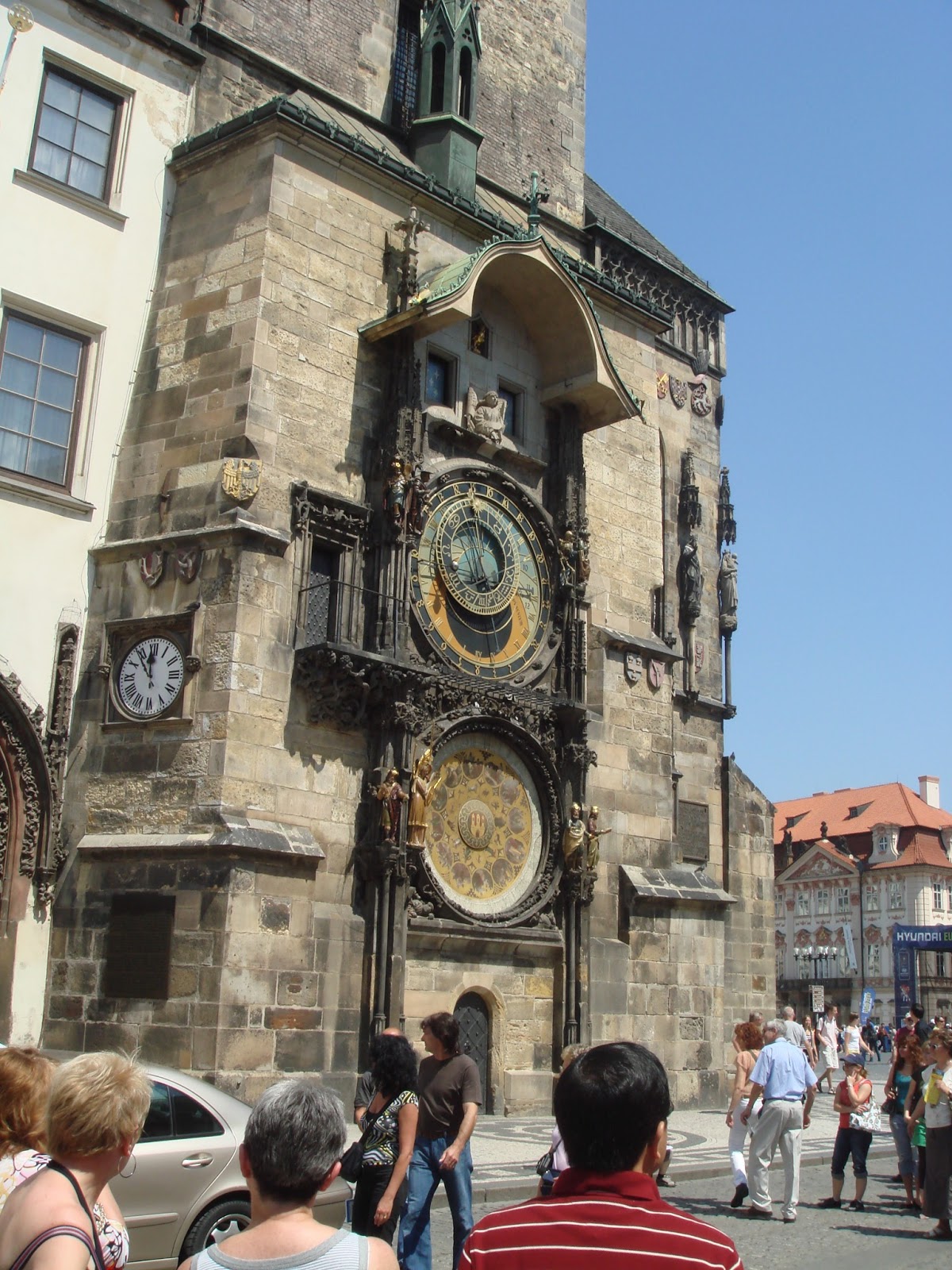 It's great to see some new architecture too!  This building is called The Dancing House, which I first spotted from across the river (I was staying in the Smichov area), is an office building designed jointly by Croatian-Czech architect Vlado Miluniĉ and American Frank Gehry.  It was built in 1997 with the strong support of playwright and former president, Václav Havel. 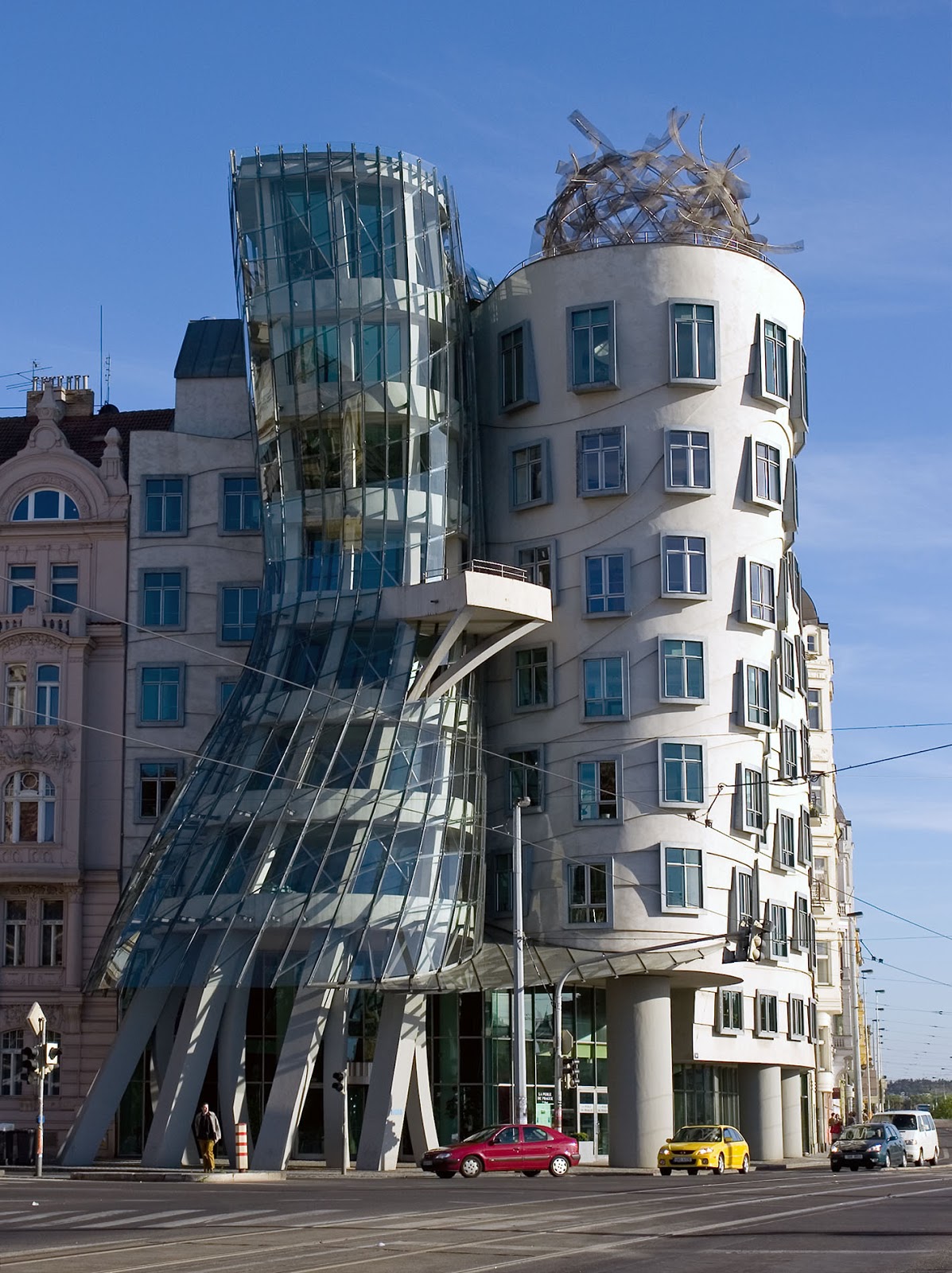 One day, after a visit to Strahov Monastery, I walked down Petřín Hill.  It is a very pleasant walk down to Malá Strana, and at the foot of the park is the Memorial to the Victims of Communism sculpture by Czech sculptor Olbram Zoubek. 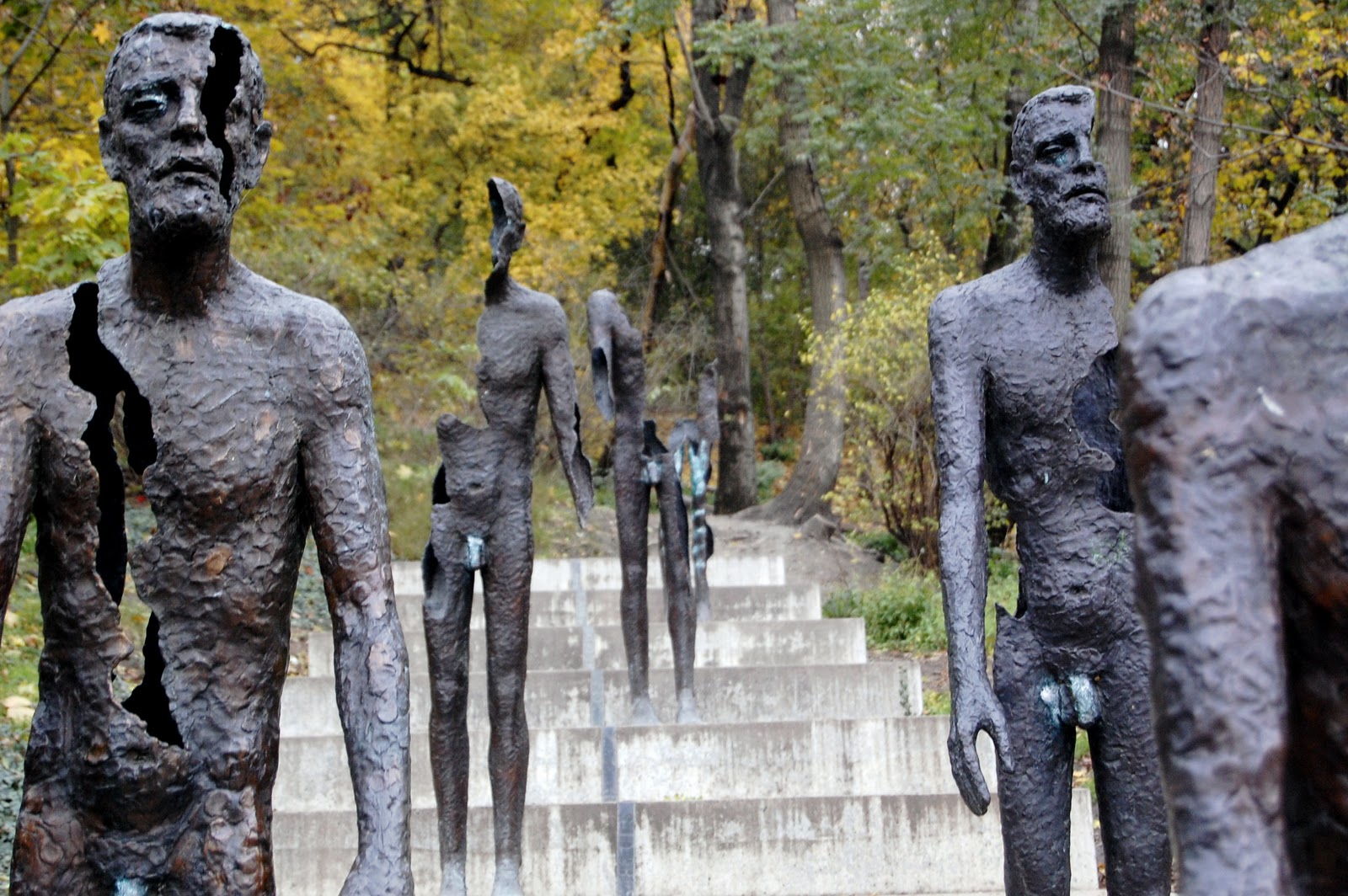