In the last few hours of 2013, I am patting myself on the back for keeping up my resolutions of last December: I started this blog, set up a facebook page, got involved in the charity fundraiser Big Egg Hunt Dublin, read a slew of books, re-booted my dream journal, and kept up a daily notes journal (suggested by, you guessed it, Austin Kleon in Steal Like an Artist!). While I plan to keep up everything from last year, and of course keep painting, I am planning to start work on my writing again. It has been a long while since I have actually set pen to paper to work on prose or poetry but it has always been in the background niggling at me. I have another list of books which are waiting for my eyes, and with the recent acquisition of a large piece of black leather, I have at least 5 gift books to make. Recently a woman at the office where I work part time, has kindly and patiently begun teaching a group of us how to crochet on our lunch breaks. So I will be starting a new crochet project in the new year too! 2014 will be another exciting and busy year and I would like to wish everyone a happy, healthy and safe New Year! 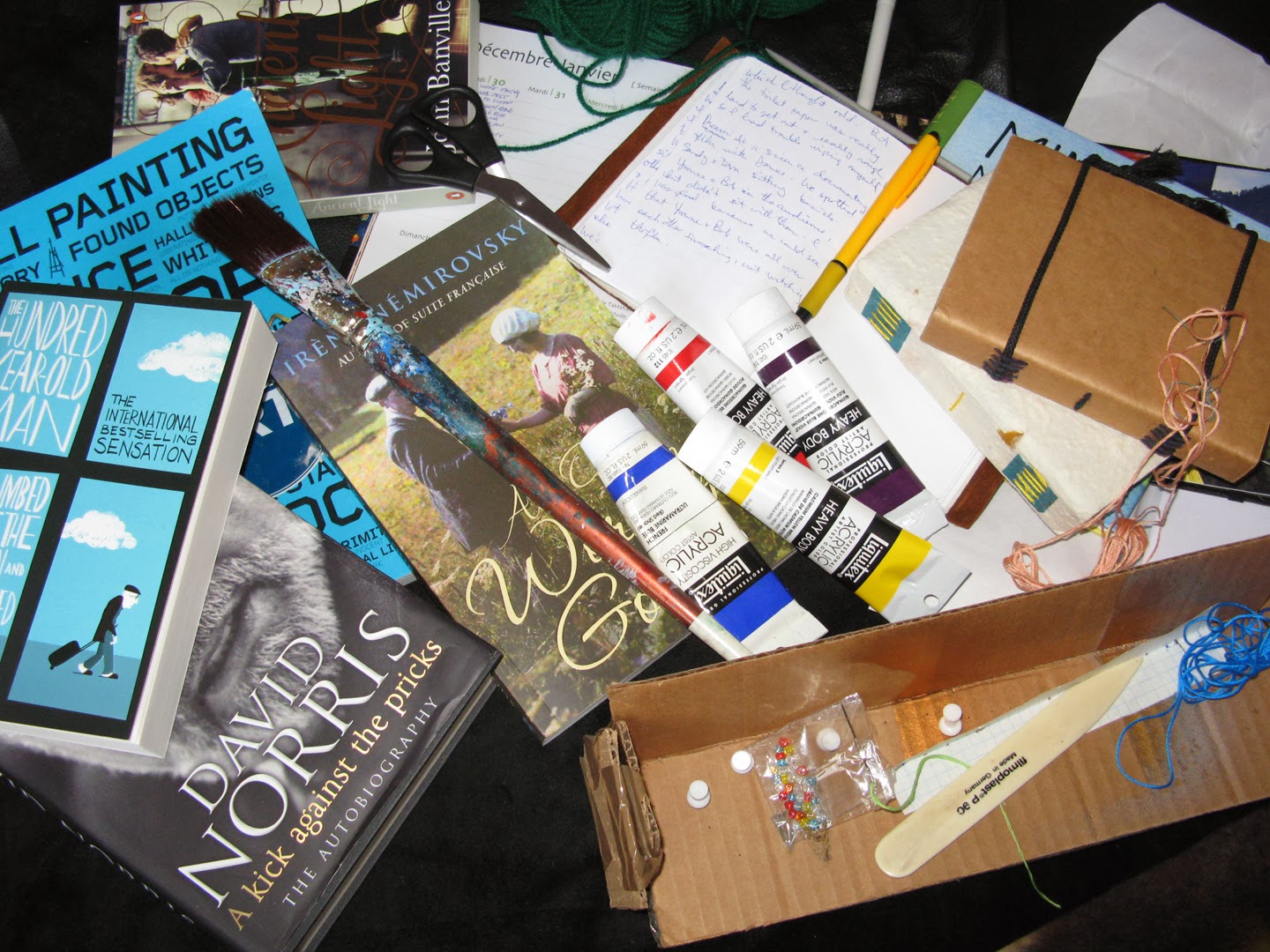 Posted by Lorraine Whelan at 17:18 No comments:

As I am busy wrapping presents and making preparations for the big day, one week away, of course I am also thinking of other things. I have had a good year, in fact a good 20 something years -- we recently had our twentieth anniversary of being settled here in Ireland! Although I lived here previously, I did the usual (for my family) back and forthing between here and Toronto as I tried to make a decision on the best place for me. I arrived once again on these shores in December 1993, but this time not alone but with my future husband, James.

Since I have been putting up images of some drawings as I digitise them, I thought it appropriate that I also celebrate this painting, The Gift, based on one of the dream drawings. I remember this took me several years to complete, but was finally signed in 1987. I know this piece still exists as it very happily hangs in my bedroom.

People of the Great Journey

At the end of November I went to Galway for the launch of my sister O.R. Melling's latest novel People of the Great Journey. I picked up a copy for myself there, and now have chance to start reading it, since I have just finished HHhH (by Laurent Binet, an amazing book!). 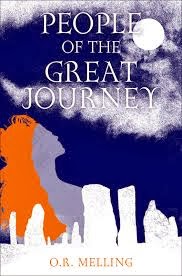 Here is Melling reading a short but enticing excerpt from the book. Looking on is Celtic Studies maestro Professor Dáibhí O'Cróinín who officially launched the book at Charlie Byrne's Bookshop. 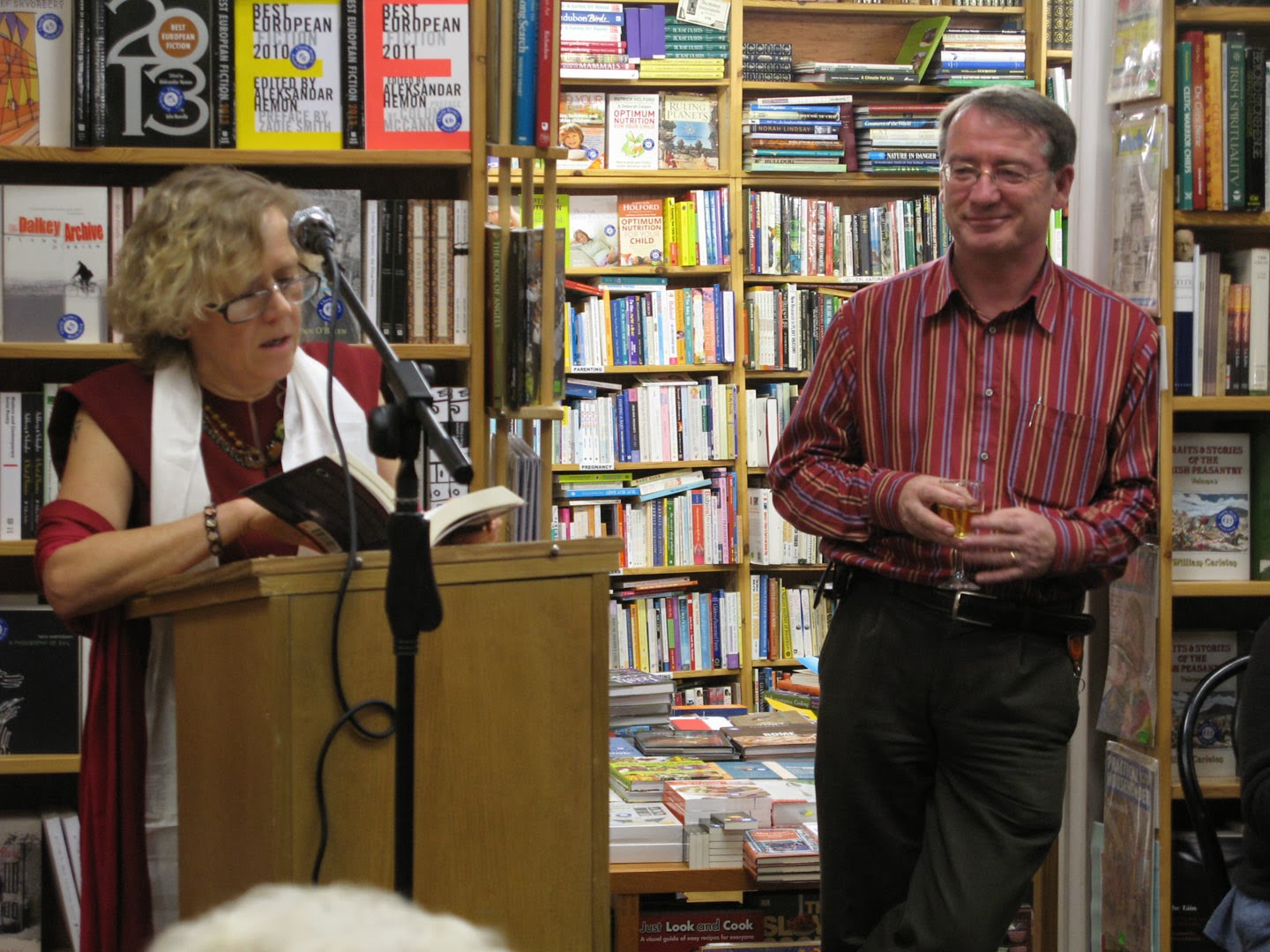 The following images are more transfers from slide to digital. They were a further development on my left hand dream drawings, done while I was at York University in Toronto under the tutelage of sculptor Hugh Leroy. I can only generally date them from the setting in the dreams so I figured around 1985 and/or 1986 (my last year of uni). I had a big batch of standard 26" x  40"  cartridge paper that I used for my drawings; the following drawings are done in chalk pastel. The dream below clearly takes place in my batchelor apartment on Kingston Rd. in Scarborough, with a depiction of one of my large diptych paintings in the background, surrounded by my beloved stereo & Boston Acoustic speakers (100 watt per side!), records and a dead baby. This was a very sad dream, despite the fair going on outside the window, and I later associated it with the death of my soul. This is the first instance that I recall of me using the figure in the red top and green skirt to represent myself. I later used elements of this dream in my poem "Portrait", published in The Sunday Times New Irish Writing in 1989. 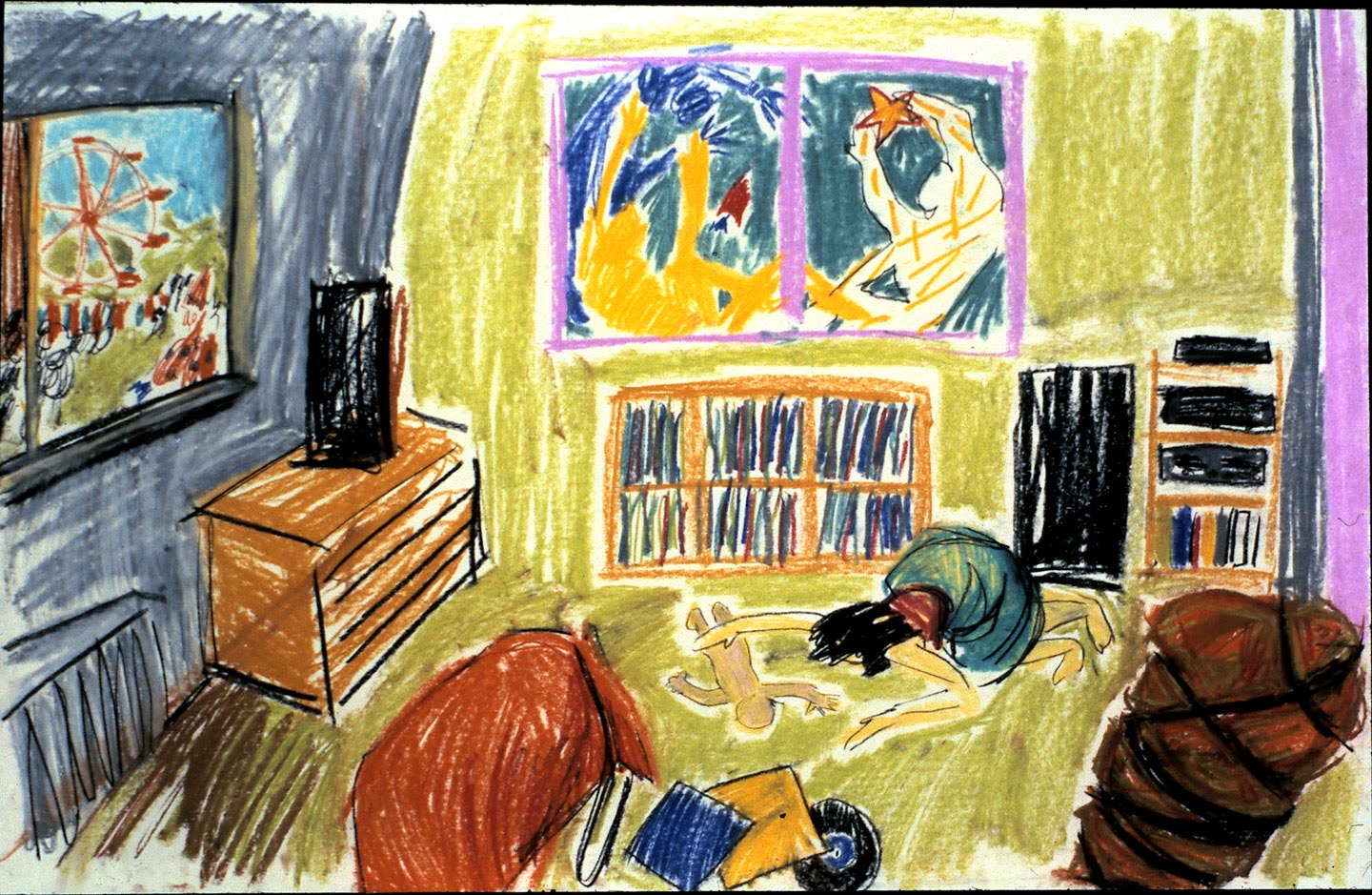 "The Blood Bears Fruit"  - some very obvious but intense imagery in this dream! 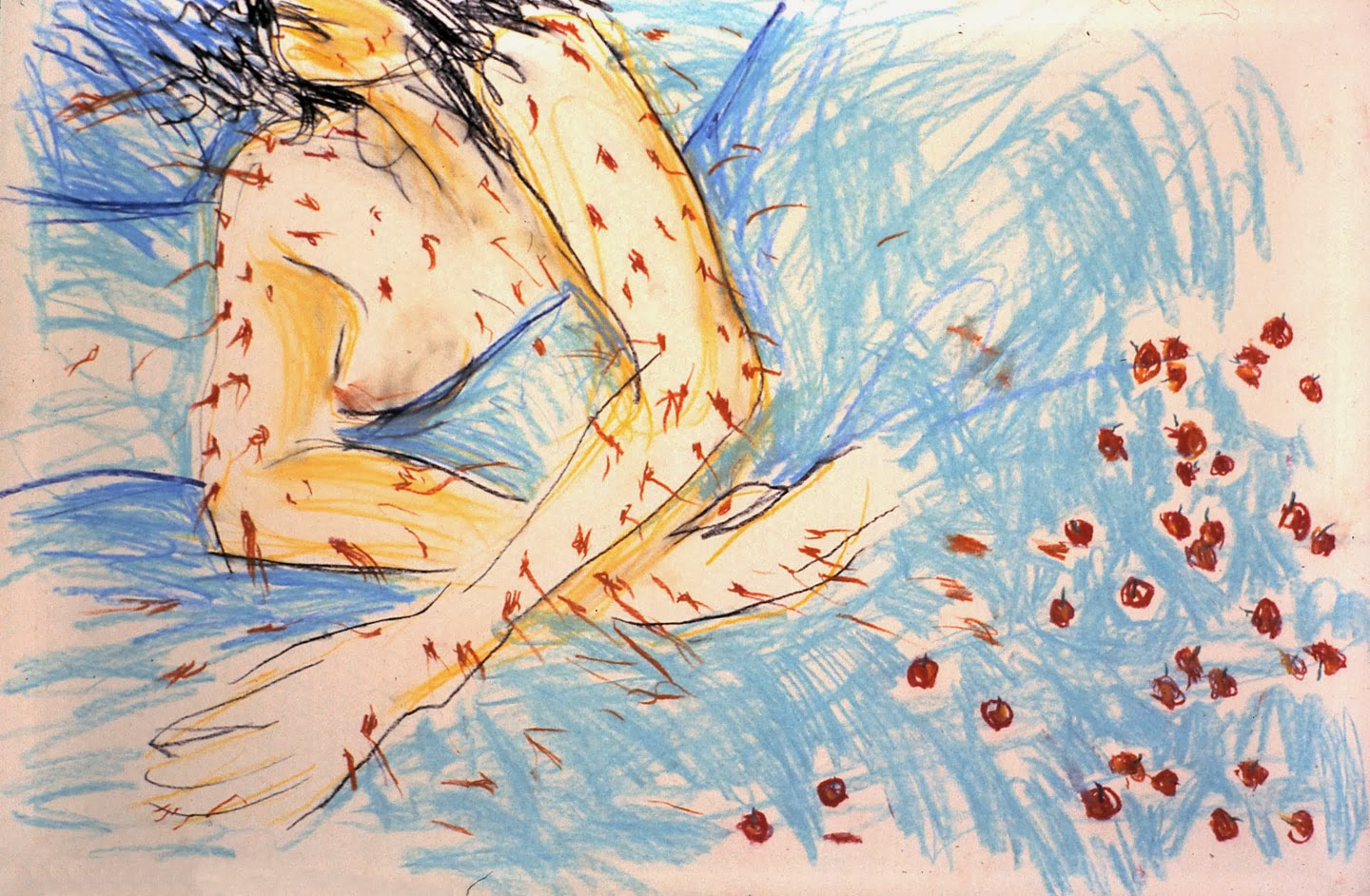 "The Second Coming: Evil"  - I remember this nightmare began as a calm moment and then all hell broke loose. 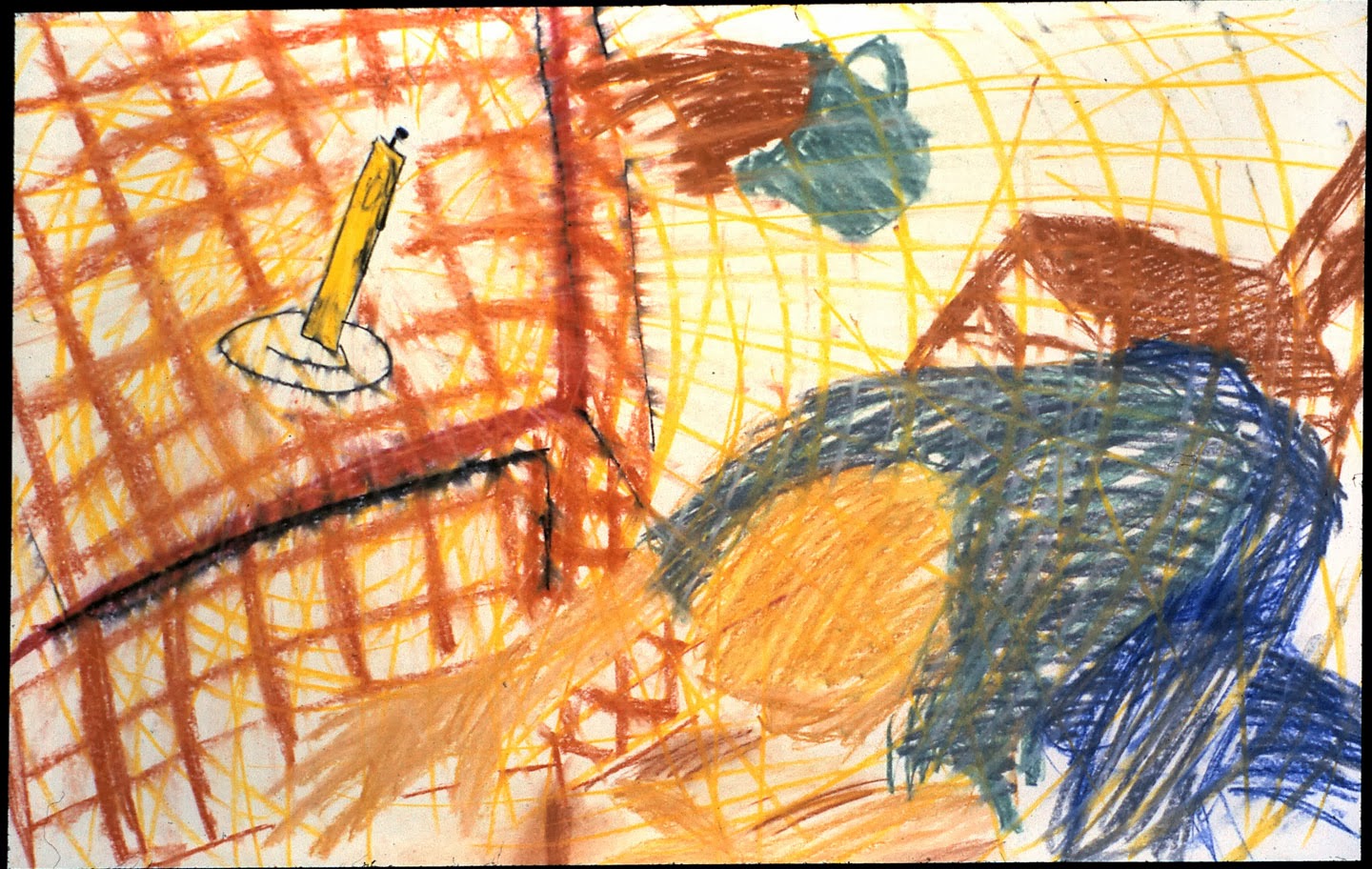 "The Second Coming: Good"  - and this one began with a lot of chaos and running through corridors until I came upon The Virgin of the Rocks -- safety and calm. 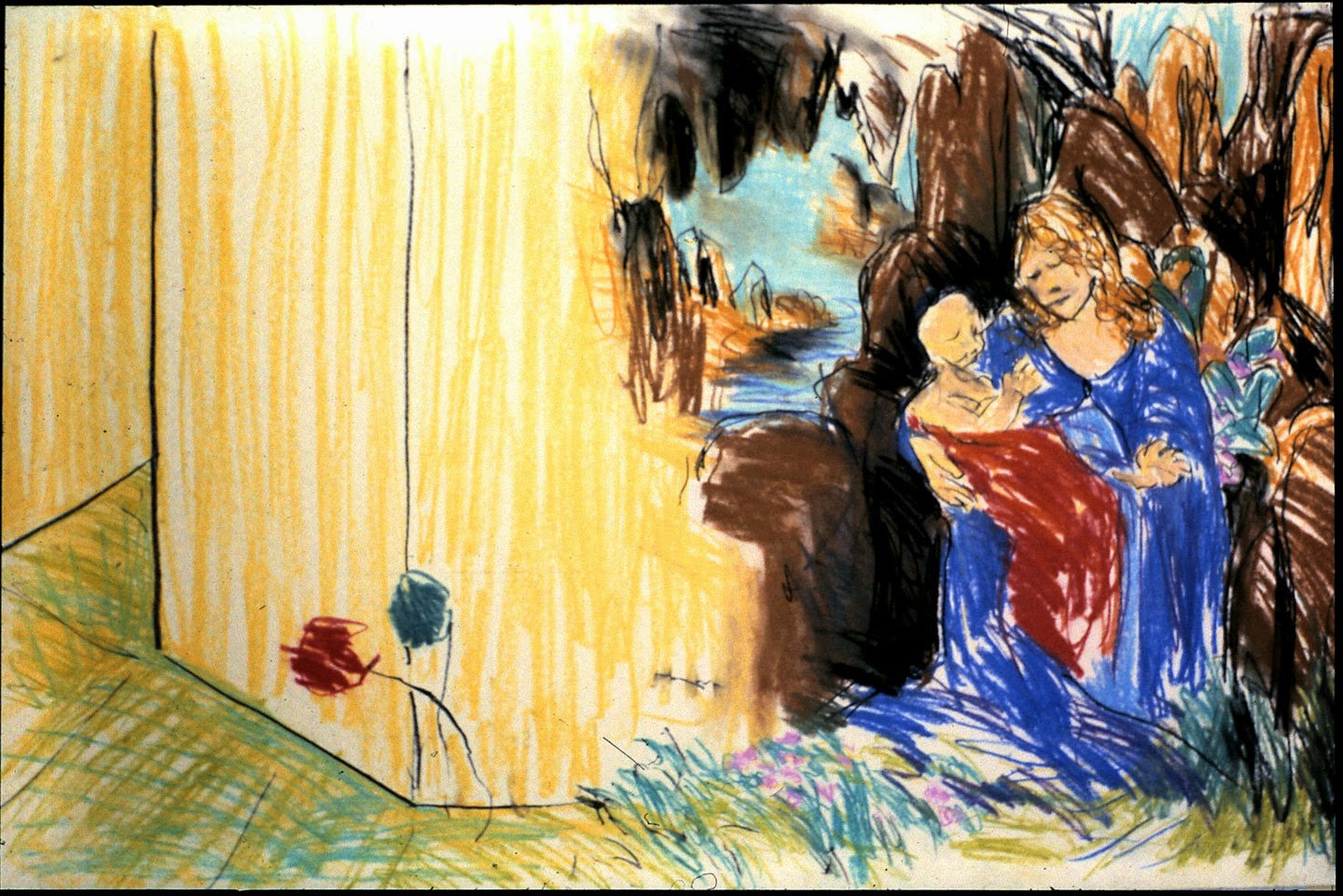 "The Water Meets the Bluff"  - although I remember this was a confusing dream, it had very specific imagery and colour (like the more saturated colour between the shadow of two branches on the sand and the change of colour in the water where the figure is about to dive). 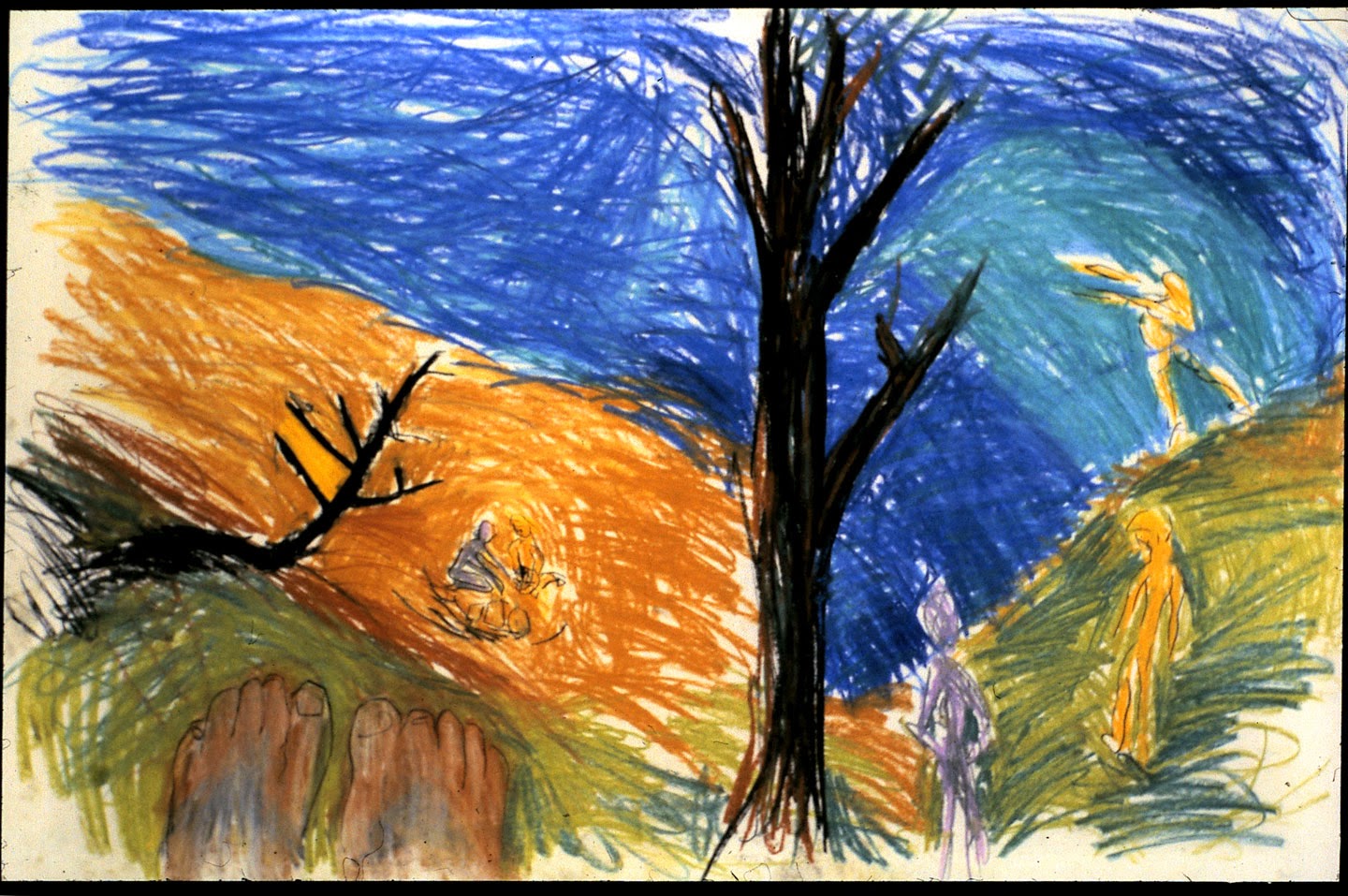 Posted by Lorraine Whelan at 11:52 No comments: