Just before Christmas last year, I received my "Incognito" kit: 3 postcards with plastic pockets (to protect finished pieces) and a return envelope. I was going take part in Incognito 2017, a fundraiser for the Jack and Jill Children's Foundation which supports the children and families of children affected by brain damage. I took part in a fundraiser for this charity a few years ago, The Big Egg Hunt Dublin, for which I painted a huge egg, which was auctioned off after public display at two locations (there were over 100 artist decorated eggs). Incognito 2017 was both less and more ambitious: there were no giant objects (eggs, pigs, hares) to be decorated and sold at auction, instead, artists simply had to create small works of art on postcards, signing the back only, and each and every postcard was sold at the same price of €50. The buyer would not know until buying a piece who the artist was, amateur or professional, famous or struggling artist. I got to work. 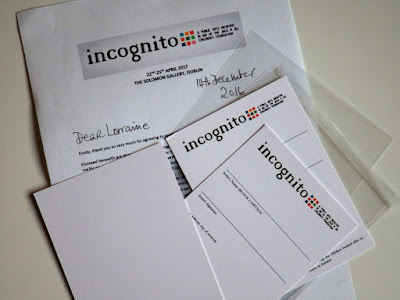 I decided early to do paintings/sketches related to the cityscape series I have been working on, planning to mount them on the postcards when finished. I began by attaching some pre-gessoed canvas to a board and added tissue for texture on the surface. 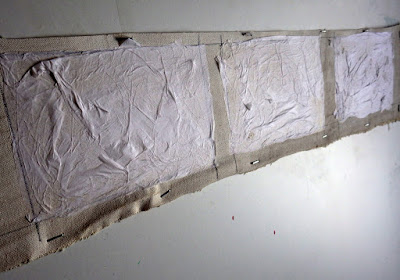 As is my usual practise when beginning a painting, I paint an undercoat of quinacridone violet. I like this colour and the way it sometimes warmly and happily peaks out of a finished painting. 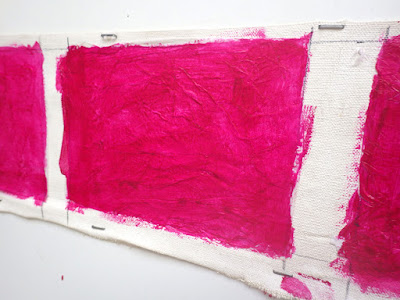 I blocked in my basic image with yellow paint and applied metal leaf. 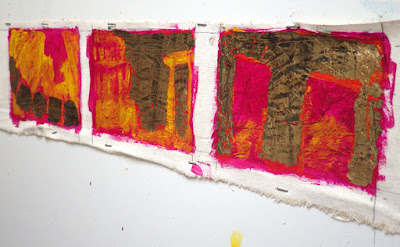 Early stages of painting show some greens and blues. 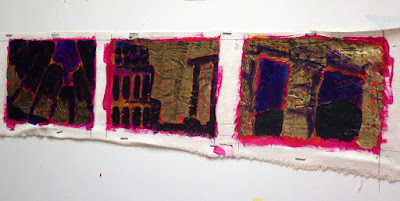 When I had finished the painting on the paintings I decided they needed a bit more oomph and brought out the oil pastels for a bit of colourful drawing. 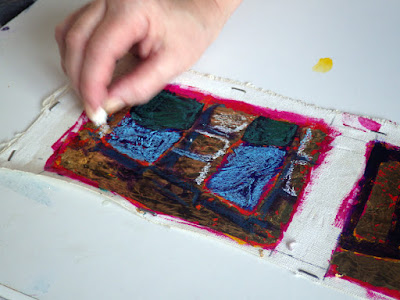 This is "Fracture" finished, prior to cutting from the board and mounting. 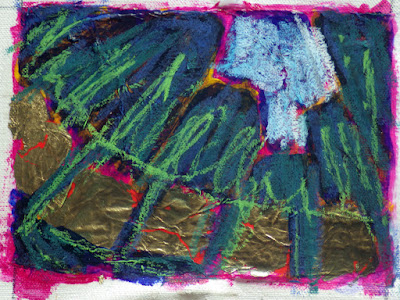 This is "Loss" prior to cutting from the board and mounting. 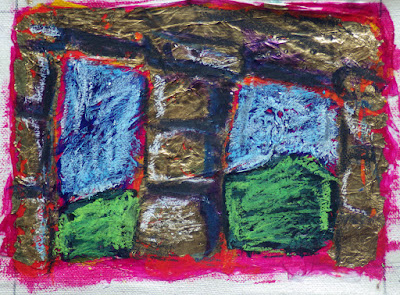 And this is "Eternity", which is related to a current large painting I am working on "Eternal City", also prior to cutting from the board and mounting on the postcard. 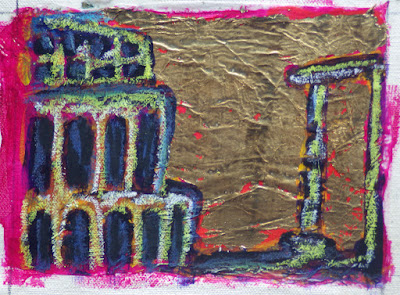 The art works were sent to the Jack and Jill foundation in late January and displayed last weekend at The Solomon Gallery, along with more than 1500 other cards! By Sunday afternoon all the cards had been sold making this a very successful fundraiser! I was planning to go into Dublin on the Friday when Incognito 2017 opened, but found out (via FaceBook) that there were enormous queues and that some people had been waiting upwards of four hours just to get in the gallery, so I decided not to go. However, an online gallery is now available here, though I do not know how long it will be live. I am happy to say that I was correct in identifying some of the more famous Irish artists who took part but it is a credit to all of the artists to give so freely of their work to this very worthy cause.

Posted by Lorraine Whelan at 09:21 No comments:

I went to the Irish Museum of Modern Art (IMMA) recently to see the Lucian Freud work, which will be exhibited in the Garden Galleries for the next five years. While at the moment all the work is being exhibited as a large collection, I got the impression that over this period that the work may be exhibited in different curatorial permutations, so now was the time to see the work before there was any personal "agenda" attached to it! This etching is Self Portrait: Reflection, 1996. 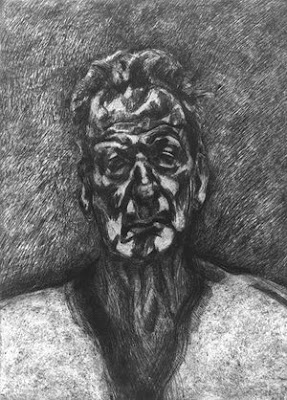 I have to admit that I was never particularly interested in Freud's (what seemed to me) hyper realistic painting before, but there is something compelling about seeing a collection of works together. And that I have long been interested in psychoanalysis. And that there is an unmistakable psychological element in his work that definitely is reflective of the work of his grandfather. So the name becomes part of the intrigue, and part of my reason for going to the exhibition. This etching is Bella in Her Pluto T Shirt, 1995. 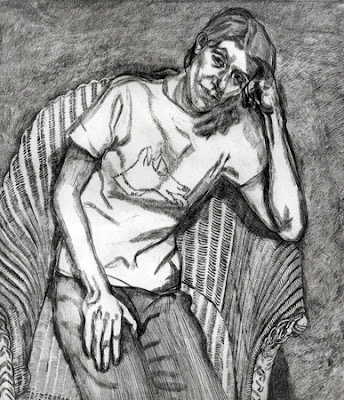 The basement gallery was devoted to works on paper, mostly etchings. Given my relatively recent interest in printmaking, I was delighted to find the room full of work that was unfamiliar to me. This etching is Girl with Fuzzy Hair, 2004. I thought this print was especially interesting as I thought at first the white highlights in the hair were were created manually when wiping off the plate before going to the press. However, there was another print with similarities and the display included the metal etching plate; the highlighted areas were actually burnished on the plate itself! These burnished highlights in curly hair are a major feat of burnishing brilliance! 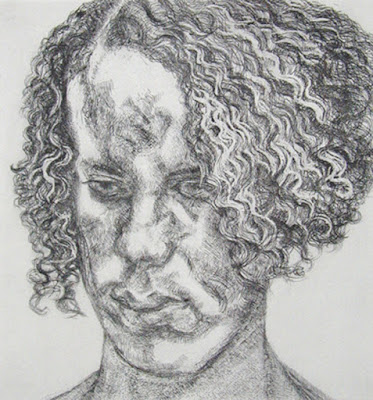 There were quite a lot of etching portraits in this exhibition, which had incredible detail and certainly did not speak of flattery; as I said above, something about psychology and the artist's name... This etching is The New Yorker, 2006. 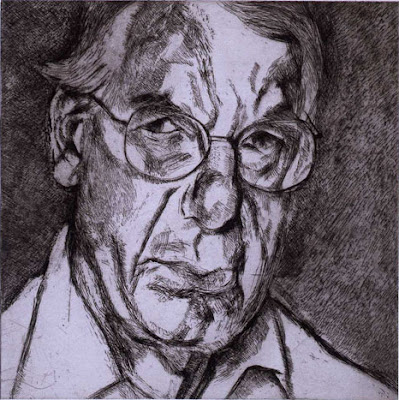 Although most of the basement gallery exhibition displayed images of people, there were several landscapes, which also indicate Freud's meticulous translation of observation. This gorgeously detailed etching is Painter's Garden, 2003-2004. 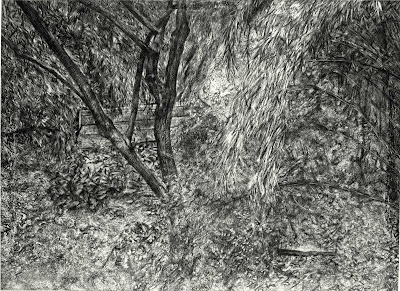 Though it seems like an age ago now, it was less than two weeks ago that my friend Jai Thorn launched his fashion-art label Jai Jai at an evening event in The Chocolate Factory, Dublin. Jai's exhibit was a tactile mix of organic matter and living material. 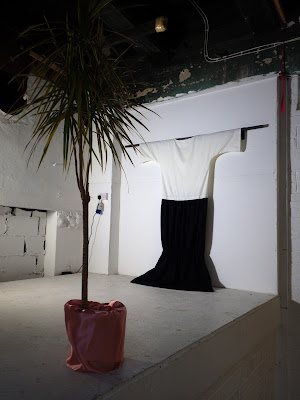 Despite the use of a male and female model, the garments themselves are conceived as "gender non-specific" and the models are perceived as vehicles for the movement of the garments; the choreography of the interaction between materials is paramount. 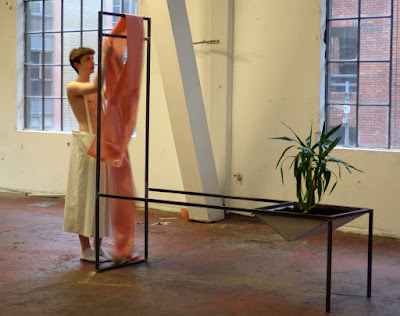 While the guests were invited to wander the space throughout the event, one looked at the still environments as sculpures most clearly during periods of time when the models were absent from the space. 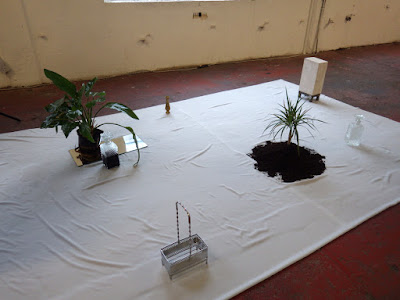 During the first presentation, the individual models slowly moved around the warehouse space, interacting with the sculptural materials throughout, 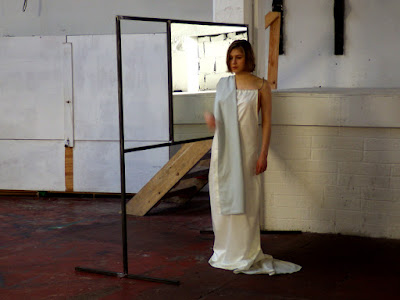 After an interval, in a second presentation, the models reappeared in different garments. There was a heightened sense of change as there was more interaction with each other while the models continued to visually and psychically explore the materials of the environment-sculptures. 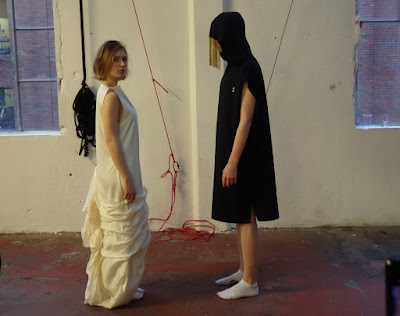 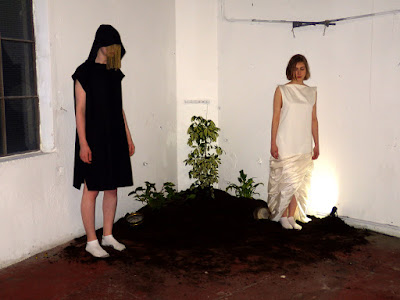 Even while the sculptures were still, one always had a sense of movement because of dynamic forms and the use of living material -- soil and plants. 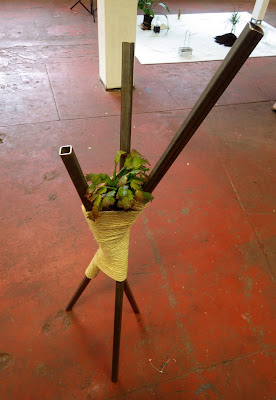 Posted by Lorraine Whelan at 10:22 No comments:

I was out early on Sunday to head into the National Print Museum in Dublin in order to attend a printmaking workshop given by artist Elaine Leader. I signed up for this workshop because the technique of "Chine collé" was featured and I have been curious about this technique since I became aware of it about 20 years ago (I had never heard of it in printmaking classes I had in art school in Toronto). To start the day we were given some pieces of thin plastic (or thick acetate?) referred to as "axpet" (which I had also never come across before). Once I removed protective film from the axpet I could use it as a plate to do an intaglio sketch on. My tool of choice (we had our pick of several  etching tools) was a converted large sharpened nail. I ended up with two plates, the first one, done in the morning a city ruin sketch and the second, done in the afternoon based on one of my stick sketches. 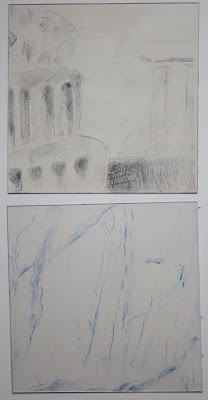 The plate was inked with a dark ink, cleaned and then given a "roll-out" layer of translucent colour. For the Chine collé I ripped two random pieces of a light weight handmade paper. Wallpaper paste is thinly spread on the back of the paper and they must be placed upside down on the plate (so that the glue will adhere to the print paper). The Chine collé is the last thing to do before going to the press as the paste must be very thin and thus can dry out quickly -- make sure your paper has been removed from its water bath and blotted before you prepare the Chine collé paper! 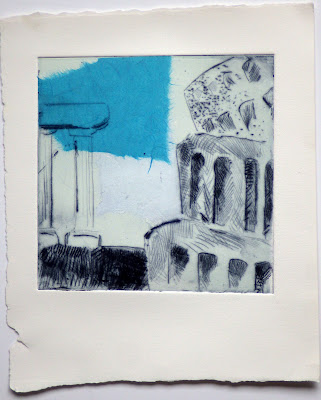 We were printing on lovely Fabriano paper, so it needed to be in the water bath at least 10 minutes before blotting. 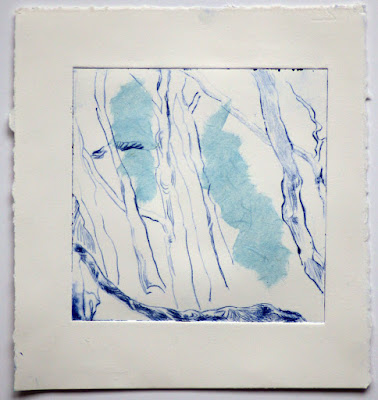 This is a close-up of the sticks print, with two pieces of Chine collé. 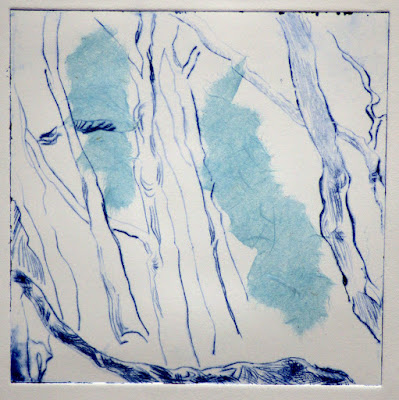 Although I had the sticks plate ready to go, Elaine Leader was talking about the embossing technique, and I wanted to quickly try it out. I cut several pieces of sandpaper into "natural" shapes, got my paper ready, and at the press itself, placed the shapes onto the back of my first piece of axpet. A piece of tissue paper is placed between the plate with shapes and the paper, which keeps the paper clean (and in my case, it was a great barrier between the paper and rough sandpaper I was using for incredible texture). 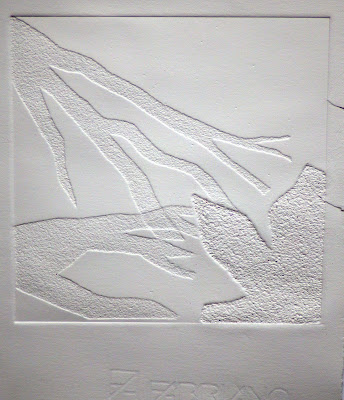 I was thrilled with the way the embossing worked and wanted to see if Chine collé could be worked with it, so I started the process again. 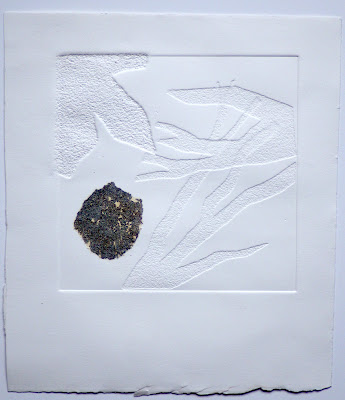 I thought the workshop was fabulous! I learned so many things in such a short space of time and can now think about how these processes can be used in other works.

Posted by Lorraine Whelan at 11:22 No comments: