Since a hard border is becoming a real possibility with the impending Brexit, I wanted to make sure I got in a visit to Belfast beforehand, because it is not very likely I will bother returning if there is a guarded border like there was before the Good Friday Agreement.

I love Belfast, especially the multitudinous public sculptures! We were just on an overnight, so after dinner we walked down the street to look at the full moon through Dan George's "The Spirit of Belfast" 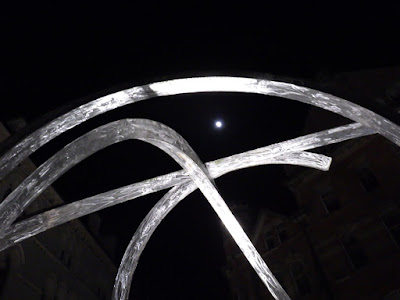 Dinner, of course was at Little Wing, which has the best pizza EVER. I think this small chain business only exists in the North, but I wish there was one closer to home. We absolutely love getting the giant pizza with pepperoni on one half, and artichokes, purple onions, tomatoes,and olives ["giardini"] on the other half. Chili flakes, chili oil, and extra parmesan are for the asking. YUM!!! 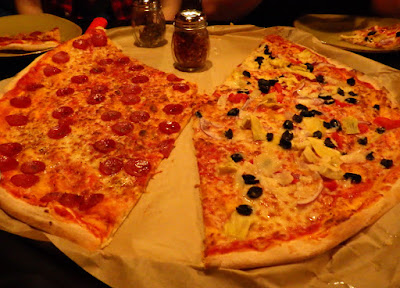 After breakfast the next morning, We had a pleasant 5 minute walk to The MAC in the Cathedral Quarter of Belfast. This is one of the happiest looking streets I have ever seen. I imagine it must be hopping in the evening. 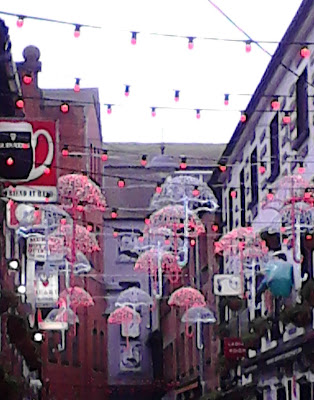 All the galleries at The MAC were devoted to MAC International, an open biennale with a large prize fund [£20K]. I was surprised that all the work in the exhibition seemed to focus on installation and video/film, with a special interest in the Beuysian concept of lecturing. The work of the prizewinner, Nikolaus Gansterer, was partly created in situ. It seemed to me that one of video lectures included the torture of a group of snails, and I found this quite distressing. 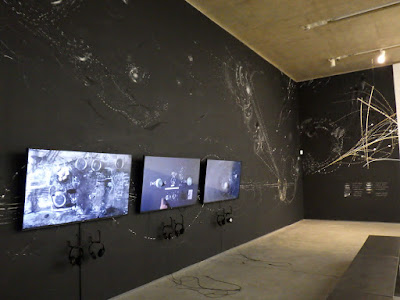 The MAC is a large arts centre, which has a reading area and lots of café space.  Like a ray of light, Mark Garry's "The Permanent Present" (according to The MAC brochure it is also "referred to affectionately" as "the rainbow") is a permanent art piece in the centre. 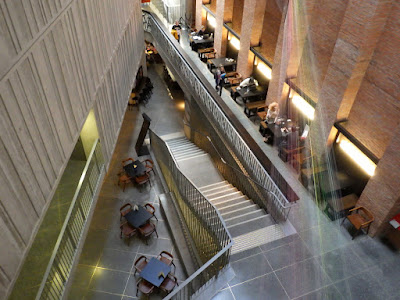 On the short walk back towards the carpark, I noticed this building but could not really see what was happening with it till I got closer. The wonky reflection in the glass is a much older building across the road. I like it! 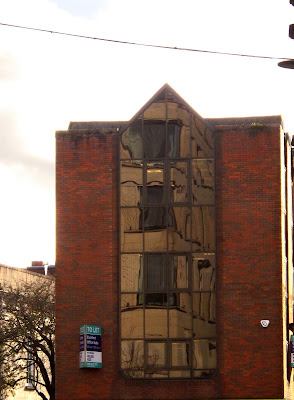 I have always liked this sculpture, "The Rise" by Wolfgang Buttress, and finally had my phone camera out in time to take its picture as we were leaving the city under a very dramatic sky. 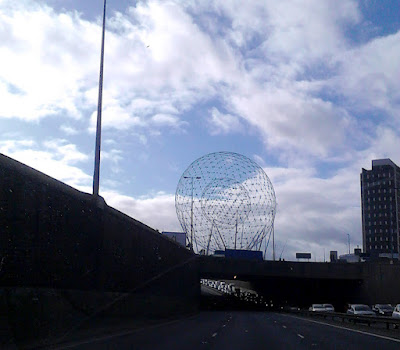 It rained as we were passing the Mountains of Mourne, but once we got across the soft border, the rain stopped for the rest of the drive home, though the dramatic skies continued. 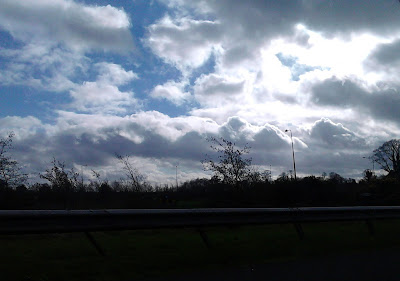 More ceramics - working on the wheel!

With the new year, I decided to try throwing some pots on the wheel. I have certainly been out of practise, not really doing any wheel work for about 30 years! My wrists don't seem to have a lot of strength these days, so centring the clay and coning was more difficult than I remembered. 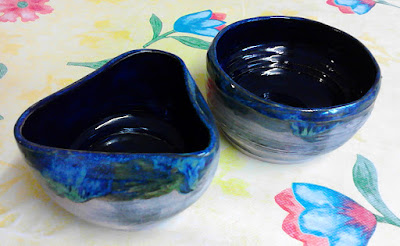 The two dishes I made, though small, could easily have the function of peanut dishes. While the clay was still very soft after I removed it from the wheel, I re-formed one of the dishes to make it a tad more interesting. 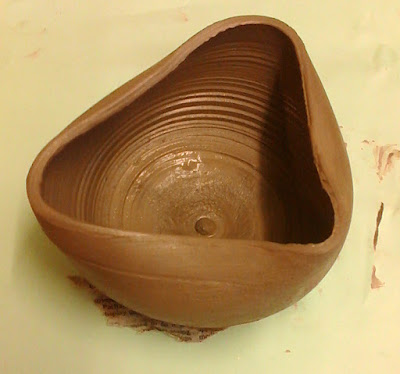 I decided that I would use the same glazing techniques for both dishes. For the inside I painted a solid black glaze that is food-friendly and that I have used before on ceramic pieces (knowing that it fires with a bluish tint). On the outside I used a mix of black and a royal blue glaze that I then sponged off. After this was dry, I painted three different glazes, but only close to the exterior rim as these glazes have a tendency to run when in the kiln. Below are the two dishes after glazing, before firing. 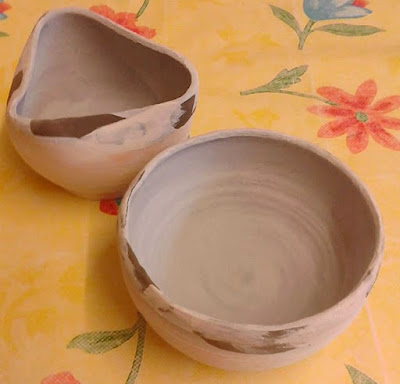 I was very pleased with the results! The exterior glazes did not drip too much, and blended together pleasingly. The interior glaze looks more of a midnight blue than black, and I like it a lot! 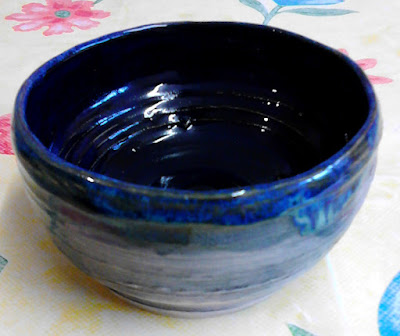 I especially like the way the wonky peanut dish fired and look forward to using it the next time I have guests. 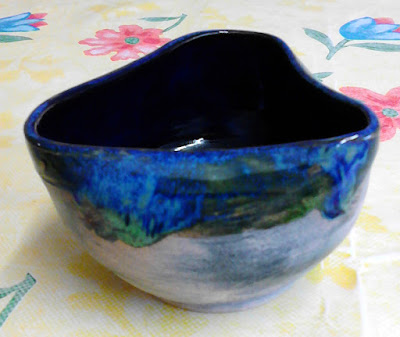 Posted by Lorraine Whelan at 11:53 No comments:

Last December I did some sketches of tree and stone imagery that I thought would be nice glaze-painted on tiles. When the ceramics workshop resumed in the new year, I was ready to do four small glaze paintings on ceramic tiles. 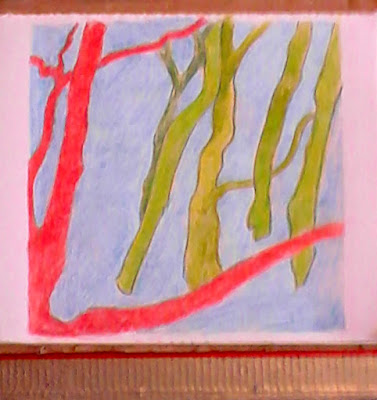 When I was doing the "liminal" sketches of stones on the shore, I made the forms and colouring more complex than the more basic stick images. 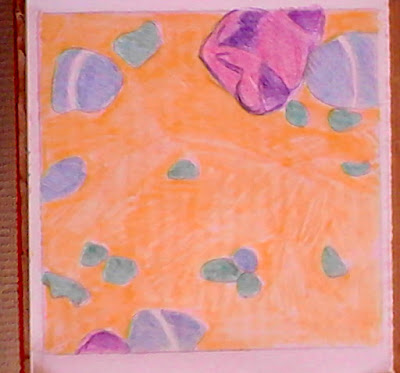 With this in mind, I decided to paint the tree tiles first. Even here, I overlapped a few glazes anyway (reds & oranges, blues & greens) to see what would happen. 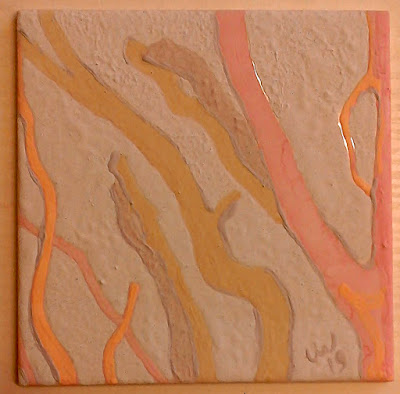 I was pleased enough with the results. I always lean towards Fauvism when I think of trees and colour at least one of them red. 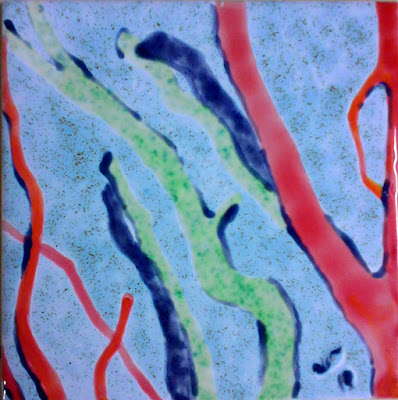 Glaze painting is always a pleasant surprise as it is impossible to know how the pre-fired glazes will react with each other when fired. There is a certain amount of looseness when painting with glaze on a tile, but its exact colouring can never really be pinpointed. 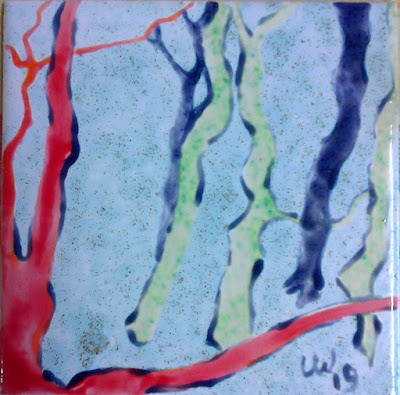 The trees tiles were put away when I was painting the stones and I decided, in keeping with the sketches, to make the forms more complex. I did take pictures of the tiles before they were fired, but deleted them by mistake. I took especial care over the sand areas, as I did not want them to appear too solid. I glazed first with a bright orange and then, after the orange glaze had dried, took a smaller brush and dotted a bright yellow glaze overtop. 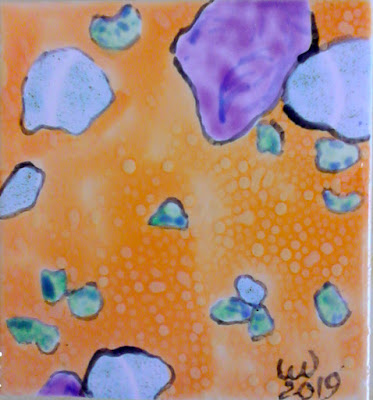 I am very pleased with the colouring and randomness of the glazes. 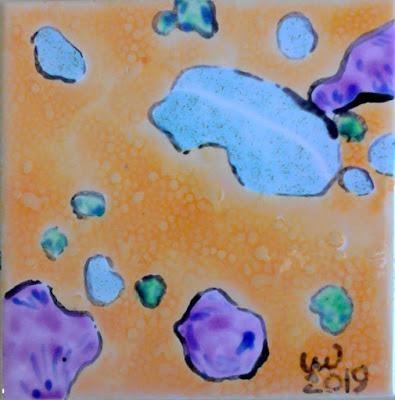 To celebrate Chinese New Year, we prepare a feast that always begins with a lovely "phoenix tail salad". The phoenix is a mythological creature and you can find more details of it here. In China, the closest thing to the phoenix is the equally mythological and fearsome peacock-tailed bird Fenghuang.
I think this salad really refers to Fenghuang, as the point of it is to display the ingredients like a peacock's tail. The salad provides a lovely centre piec. 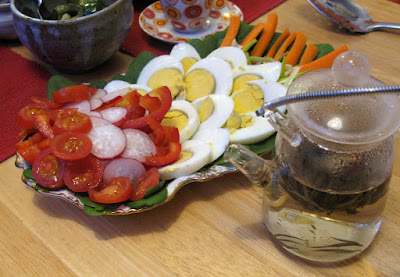 These are pictures from a few different years, so the ingredients and placement of veggies may differ slightly, but the overall effect is the same. Start with a bed of greens (spinach, rocket, coriander, parsley or a mixture) and layer slices of hardboiled egg above the centre of your plate. Shredded green onion, strips of red pepper and/or thin sticks of celery can be tucked behind egg, peeking out of the "tail". Slices of tomato circle the bottom area of the plate, and add sticks of carrot as a final touch. One year I used cherry tomatoes and also added thinly sliced radishes. Another year I included snow peas/mangetout in the mix. The exact placement of ingredients and the ingredients themselves can be left to your own imagination and preference. 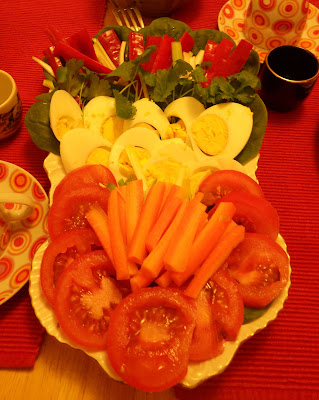 The sesame soy salad dressing should be kept separate with a small serving spoon, to individually ladle onto the salad once you have chosen your ingredients for your own plate. The tasty dressing is simple to make: combine 3 tblsp soy sauce, 2 tblsp rice or white wine vinegar, and 2 tsp sesame oil.
This is a delicious and healthy start to any meal, but won't be a centrepiece for long! 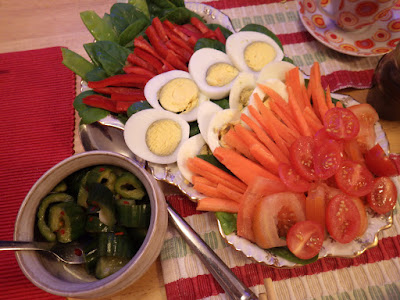