Well, the presents are all wrapped, the house and tree are decorated, gingerbread cookies made... with just a few things left to do, I am definitely in full-swing Christmas mode. Certainly this has been a humdinger of a year, but still there are many things to be grateful for. One of the last things for me will be, through this blog, to send out good wishes into the ether, for readers to have a happy, healthy holiday and a joyous new year. I will not be posting again until next year. Keep well, stay safe. 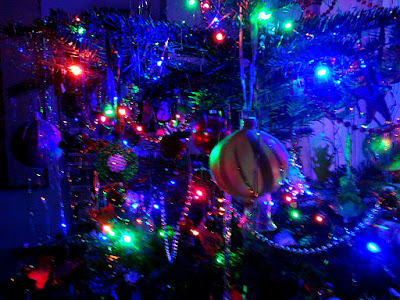 Posted by Lorraine Whelan at 10:32 No comments:

self-portraits with home made ink!

As part of my studio residency (whether at home due to lockdown, or at Signal Arts Centre when allowed) a daily self-portrait is de rigueur. I have blogged about previous selfies from this year's residency here and introduced the residency, with links to previous years here.

During August of this year, both myself and my husband, sculptor James Hayes, took part in the Aos Dara/Umha Aois combined symposium. I posted about my work here and here, but one of the things James did as part of his work was to experiment with making "iron gall ink" out of oak galls found in Tomnafinnoge Wood. He recorded the entire process, posting a, 11.5 minute video to youtube, which may be seen here. He exhibited the video, along with other work, in the culminating exhibition to celebrate work done during the Aos Dara/Umha Aois combined symposium this year along with work done during last year's Aos Dara symposium. I blogged about the exhibition here.

James also used the same method to make a jar of ink from walnut shells, which he had found during a site meeting at a park in Dublin. Taking up a pen nib and holder, I used the walnut ink to create a self portrait one afternoon, while in lockdown. 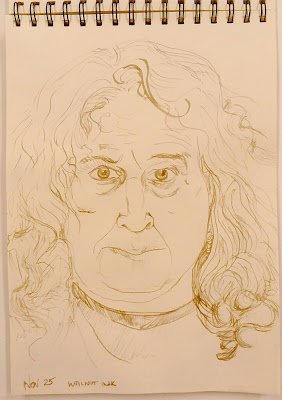 And the next day I decided to try out the ink made with oak galls to see if I could spot their differences. In fact, they both were easy to work with as any commercial ink, with only slight difference in their colours. 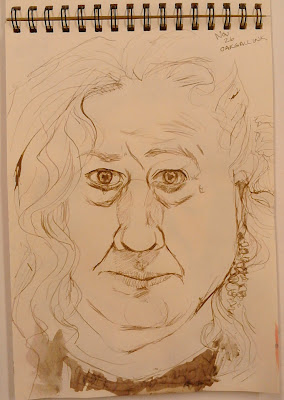 Posted by Lorraine Whelan at 09:48 No comments:

With the second lockdown ended on December 1, Signal Arts Centre prepared in advance to open its doors to its annual Christmas Craft Fair. 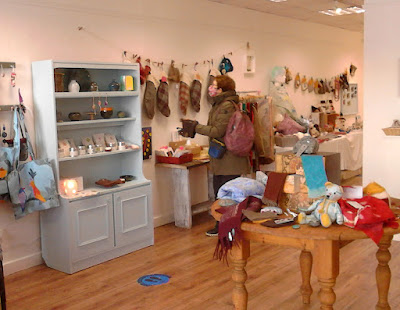 As in previous years, the gallery was set up with lovely furniture to display the wares of local crafts people. 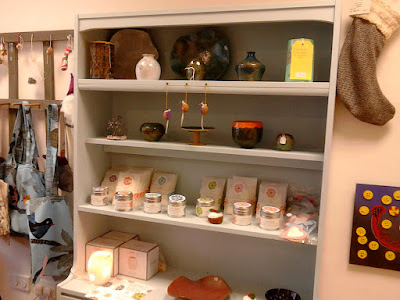 If you can think of a craft, you can be sure it is represented here - knitwear, felting, ceramics, etc. 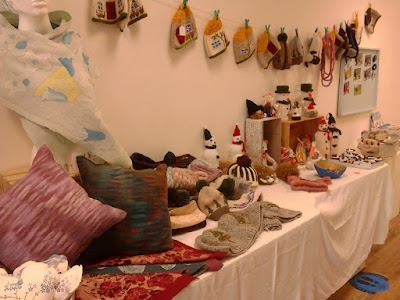 If you're looking for lovely gifts that are hand-crafted you'll be sure to find them here - jewellery, copper tea-light holders, handbags, tea cosies, ceramic dishes, hand-printed t-shirts, felted scarves and plenty more! 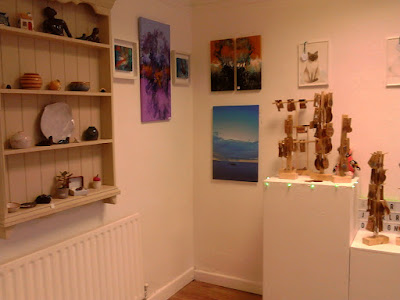 There are gift items and decorations, big and small. 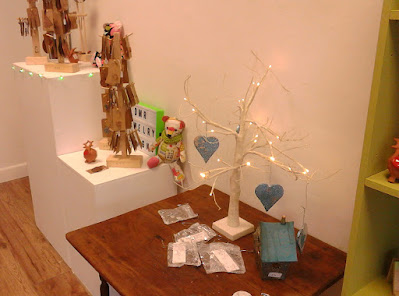 There are also a stack of hand-made cards, both seasonal and all occasion. Though there are a few countries which have an early last-date for delivery before xmas, post within Ireland can be sent up to December 21. 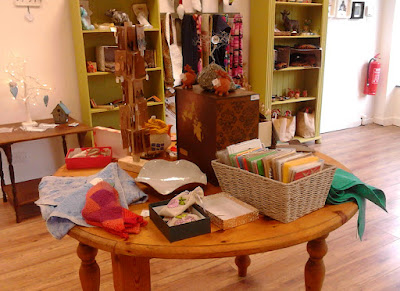 It seems a little more sparse than in previous years but I have found it easier to actually focus on goods. New stock is arriving regularly, so I highly recommend more than one visit. The craft fair is open daily from 10 am to 5 pm until Christmas Eve. The "shop" is fully staffed so it does not close for lunch, and all covid safety measures are in place. 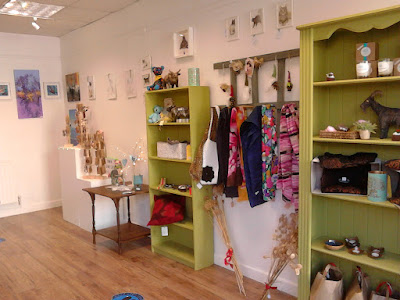 Posted by Lorraine Whelan at 09:56 No comments:

My intention for this year's studio residency at Signal Arts Centre was threefold: to do a daily self-portrait (see blog post here), make a number of unique silk fibre pages (see blog post here), and to create a new series of prints as part of my body of work, Memory Is My Homeland. My initial intention was to create monoprints on the handmade silk fibre paper. However, after doing several tests, which I discussed here, I decided to do linoprints, which I discussed here. Everything was going swimmingly until a second lockdown meant that I was going to be working at home instead of the Signal studio.

Since I normally work in my home studio, theoretically this wasn't a big deal BUT the road where Signal Arts Centre is located was blocked off due to construction on a nearby bridge and the printing press was still in the studio at Signal. As I had hoped, the road was only blocked off for two weeks, during which time I could prepare lino blocks, cut paper, etc. so that I would be good to go once I retrieved the press. In any case, my home studio is in the attic so any printmaking would have to be done downstairs. For several weeks then, the kitchen was the area for preparing paper and inking the blocks. 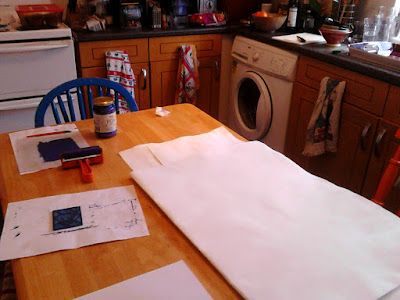 It is a short hop down the hall into the living room, where the press was set up. As you can see by the picture, I made a heavy cardboard "window" in which to place the lino block to effectively use the press as a relief printer. The cardboard was large enough to register the paper against. 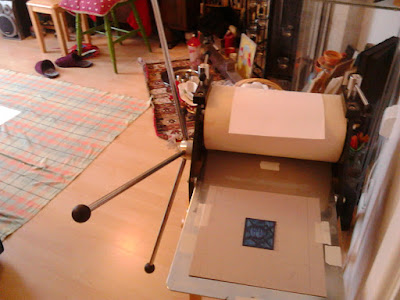 The blanketed floor of the living room was just large enough to do one edition of ten and a unique print on silk fibre paper for each of the lino blocks in the series. For this image of a telephone mouthpiece I chose the silk fibre paper that contained a tangle of inclusions. Certainly an image representative of both communication and mis-communication. 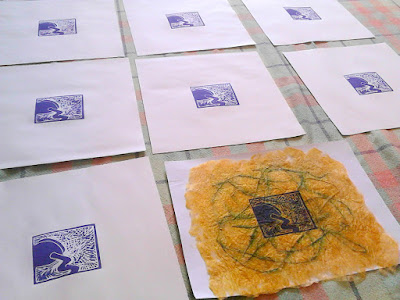 My initial image of two clothes pegs on the line didn't work on such a tiny scale, but I still wanted to use the image. I decided to re-do it as one larger clothes peg and am happy with the results of this very domestic image. I chose a silk fibre page that had soft mauve thread inclusions. 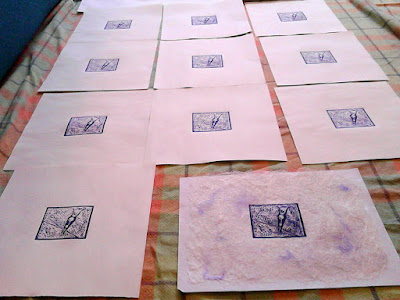 I had this memory of swinging on a chain barrier in front of the house where I was born and that I only lived in till I was 2 years old, in Toronto. I thought it was an impossible memory until one day, passing River St on a streetcar, I saw that the chain link barriers were still in front of those city housing units. They separated lawns from the footpaths and were only about a foot high - something a toddler could, in fact, manage to swing on. The silk fibre paper has both Fabriano paper and green thread inclusions. 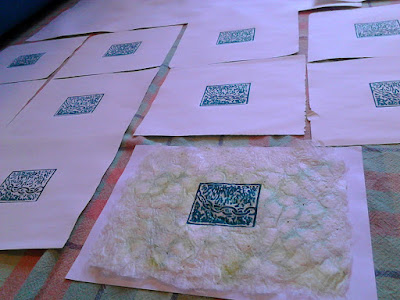 As well as printing editions and unique prints on silk fibre paper for the new series of lino blocks, I also wanted to print editions for some older blocks that fit with the theme, specifically the two mugs and the teapot, which appeared in my Good Morning/Maidín Maigh/Buenos Días books that I made a few years ago. Details of that project can be seen here. 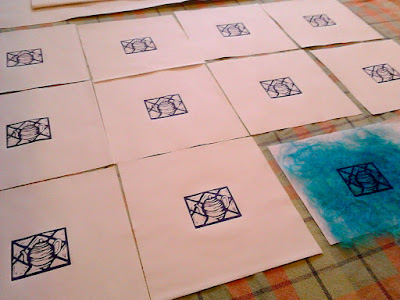 I also realised that I only had a few test prints of a lino I cut a few years ago, Prayers for My Children, certainly in direct response to an incident at my mother's deathbed and the surprise estrangement from my siblings following her death.  I wrote a fictionalised account of this and it was published here. I think this piece belongs with the current series; the unique print is on an un-dyed silk fibre page with Fabriano paper inclusions. 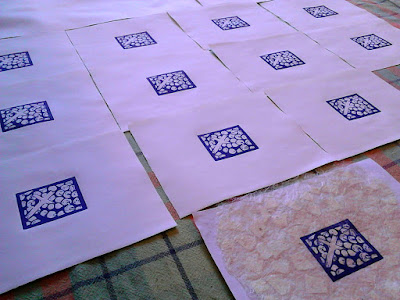 The kitchen was also a handy place for clean up each day. 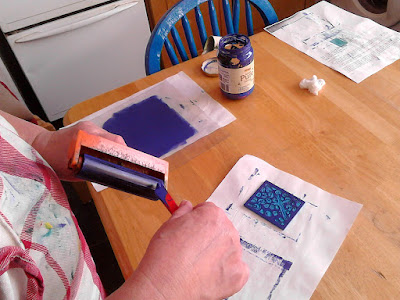