Towards the end of last year I came across a box of white ceramic tiles, leftover from tiling the bath/shower area a few years ago. There were 30-40 square tiles in the box, and I wondered if I could make use of them in my weekly ceramics workshop. 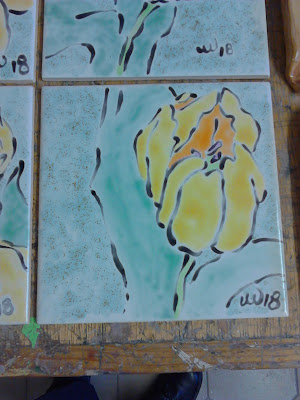 First a test tile had to be made so that I could see how the available glazes reacted with the pre-glazed tiles. I was pleased with the result and thought I could proceed with the idea of doing paintings and/or
drawings on the available tiles. 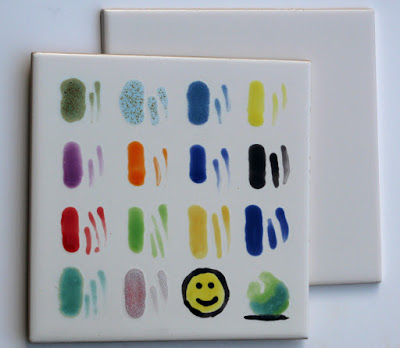 A chart corresponding to the glazes used on the tile test is a necessary and invaluable tool! The available glazes are numbered mostly with Roman numerals, and I left out glazes that I definitely would not be using for this project (e.g., white and clear glazes). 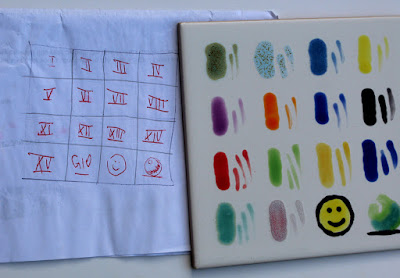 I dug out some of my sketchbooks that had floral drawings and focused on images that I wanted to reproduce on the tiles and re-sketched them to the tile size. I also made a small chart so that the watercolour pencils I was using corresponded with the glaze test tile. 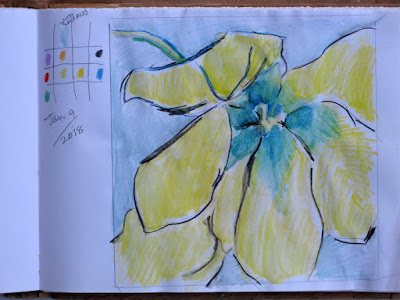 I used this sketch as a model for the finished tile that is the first image above. 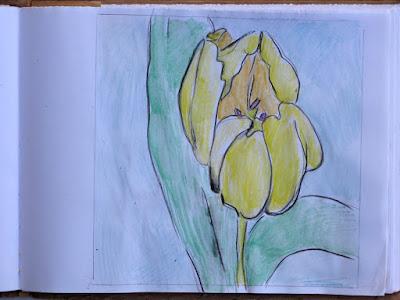 I decided to do five testers to see how painting the glazes on tiles would work. It was a meticulous task, as the glazes are being painted on a glossy, smooth pre-glazed tile. 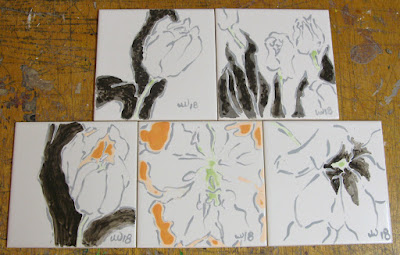 This is an image of four of the completed tiles in the kiln before firing. The fifth tile is on another shelf. 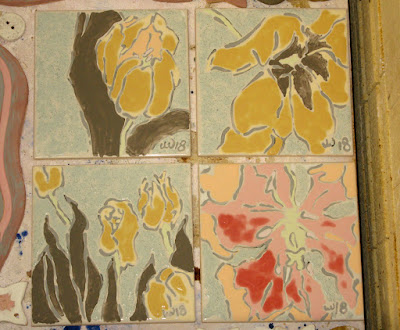 These are the same four tiles, still in the kiln, after the firing. I am pleased with the results and now can confidently do more of these paintings with the other tiles in the box! 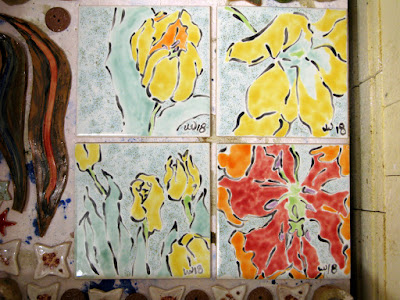 One of my first projects of the new year was to return to the "handbag" books. As I mentioned in a previous post, I have a number of my Mum's old handbags and decided to turn them into sketchbook/journals. The purple bag only netted me one book (and lots of problems to solve!), but I figured I could make two books from the turquoise bag. 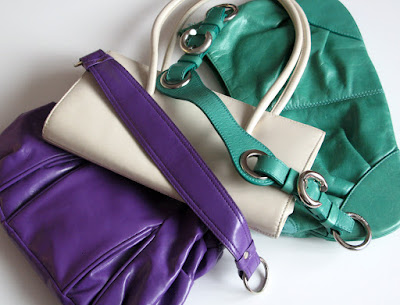 First I opened the side seams, removed the lining and zipper and loosely cut the usuable portions of the bag. I then did some measuring and squaring and made more exact cuts. These would provide soft covers for two books. They seem to be leather? 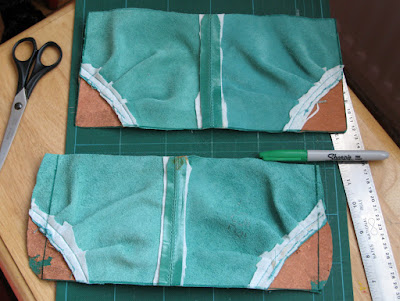 I ripped and folded some pale yellow paper and found some decorative origami paper to use as endpapers. Each book would have 100 pages and endpapers. 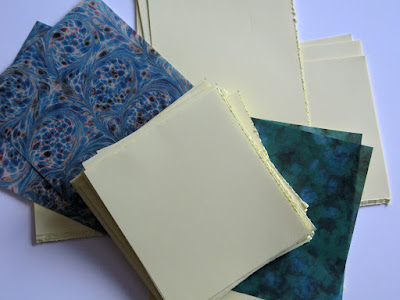 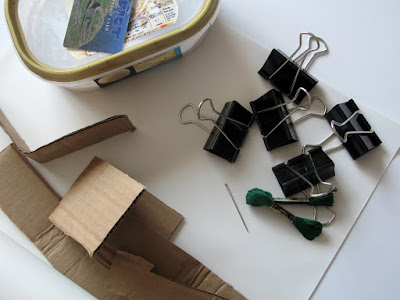 Because this particular handbag had folded features that I wanted to retain, I also required an additional thin paper (I have a roll of thin acid free rag paper which is ideal, but a regular bond or photocopy paper would also work). I cut to size and glued this paper to the inside of the covers. The result is bumpy, but it serves its purpose. I decided to cut extra pieces of this paper to wrap around folios and provide additional endpapers 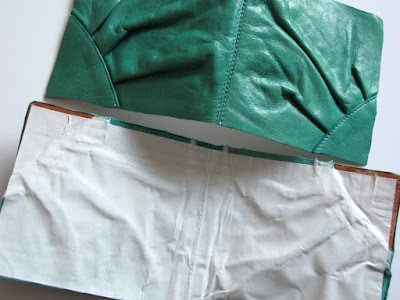 I don't have a photo for the next step: the yellow papers and only slightly larger origami endpapers were wrapped by the longer white endpaper; the spine of the white endpaper wrap was glued to the spine of the paper bunch and left overnight. This paper grouping was then wrapped by the covers and lion clips placed as below. Markings where the binding holes would go were made using a marker and the holes were drilled (using a drill press). 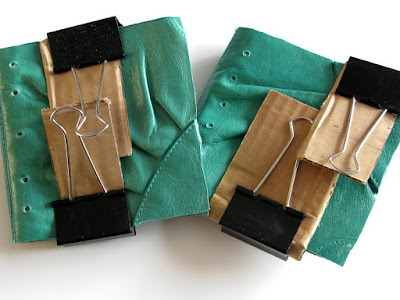 The final step of binding is quite simple: thread from hole to hole in a basic Japanese stab binding technique (instructions here). I used the full six stranded thread, doubled while sewing and repeated; this means that every binding line shown here is 24 strands. 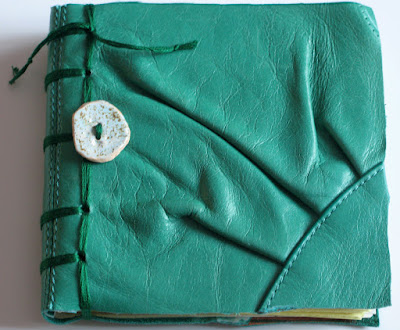 Before xmas I had made some buttons in my ceramics workshop and decided that these made a nice additional detail on the handbag books.

I actually ran out of the green embroidery thread that I was using for binding, so for the second book I attached the button with some turquoise thread that was in my sewing box. For this button I simply threaded the needle under binding threads and through the buttonholes, tying knots without going through the binding holes of the book.

For the second book I decided to place the button near the bottom hole instead of the centre hole. 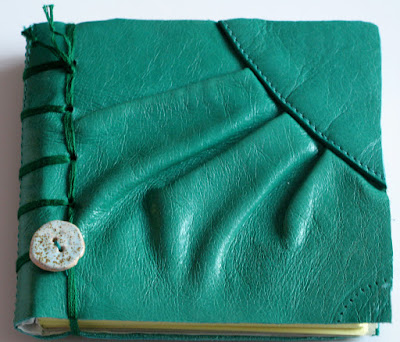 It was very exciting to get back to the ceramics workshop last week and find that a number of items I had made in the last few classes of 2017 were bisque fired and now ready to glaze. I was busy with a new project though, and didn't have time to glaze these things last week, but hope to do so this week.

When working with clay, whether hand-building or working on the wheel, it is important to wedge the clay heartily; i.e. knead it to remove air bubbles (so finished pieces do not explode when fired!).

This is a plain draped slab pot: after wedging and rolling out some grey (stoneware) clay, I trimmed the sides and draped the slab over a paper-covered block of wood. I created two small rectangular feet to raise the platter form. 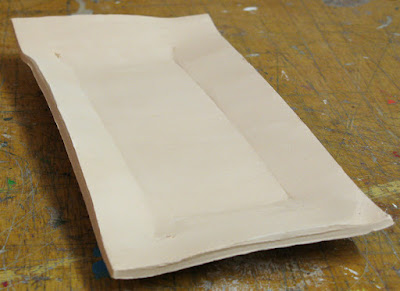 This is a more free-form draped slab pot. It was created in the same manner as the platter above, but I wedged some terracotta clay with the grey clay in order to produce a marbling effect. This will be glazed with a transparent glaze in order that the marbling remains visible. 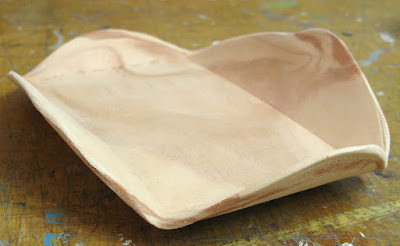 This design of tree branches was created by the sgraffito method. After wedging, rolling out, and trimming a slab of grey clay, I painted the slab entirely with a terracotta slip. At the leather-hard stage. I scratched out the drawing with a sharp tool. 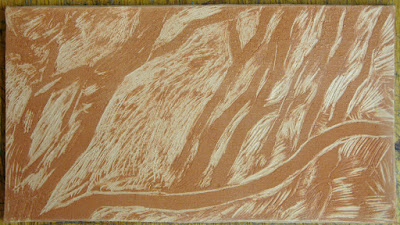 This tile of tree branches was also created using sgraffito. 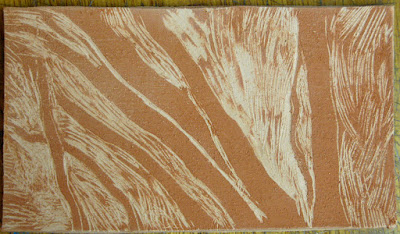 The stone designs of the following three tiles were created using the mishima technique. After wedging, rolling and trimming the slabs, a design is incised in the leather-hard clay. 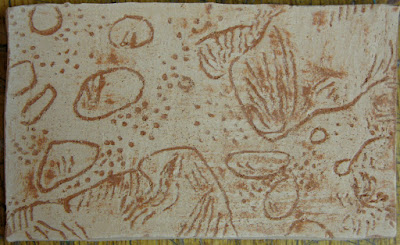 At this stage the clay is still moist enough to accept a layer of slip painted over its surface. I used a terracotta slip. 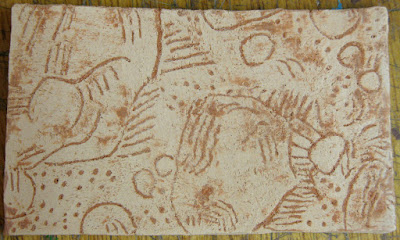 When the tile is nearly dry,  the slip is scraped away from the surface uniformly such that slip that had filled the incised design, remains to show the drawing. I plan to tint a clear glaze so that the designs remain visible after their final firing. 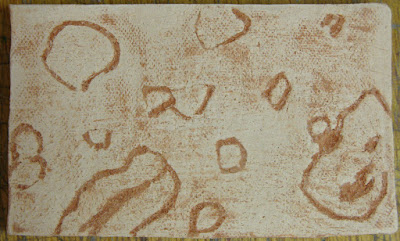 A number of years ago, my husband was watching a cooking show on xmas eve, where the chef talked about a super easy recipe to make as an accompaniment to the xmas ham. This recipe, with origins in Italy, is so easy to make that he set about immediately to make it in order that we could eat it the next day! Mustard fruit is so delicious though, it should not be hidden away to have only once a year. This accompaniment to the xmas ham also makes a fabulous chutney to have with cheeses and the other usual party snacks year round. Here goes! 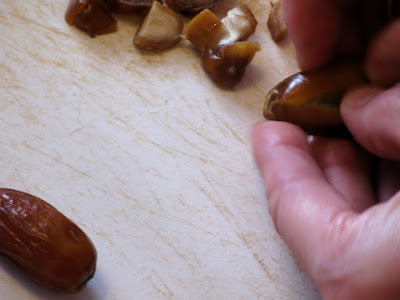 Use any and all of your dried fruit that happens to be in your cupboard or fridge but make sure you have a varied mix. Your chutney may actually have a slightly different flavour every time you make it, depending on what's available for your mix. This year we had raisins, dried apricots, maraschino cherries, dates, dried figs, and candied peel. 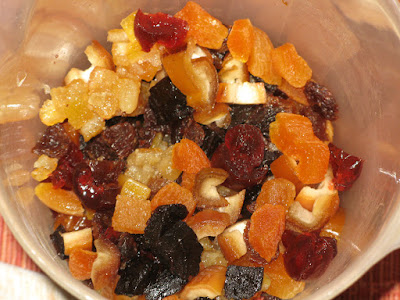 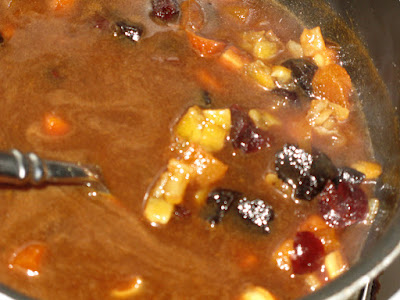 Mix all ingredients in a pot and bring to a hard boil; simmer for 5-10 mins stirring regularly so as not to stick to the bottom of the pot. 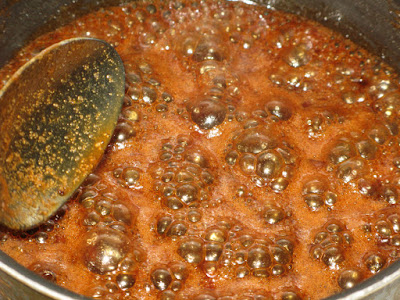 As it cools, the mixture becomes fairly thick. Spoon generously over your ham. Enjoy! 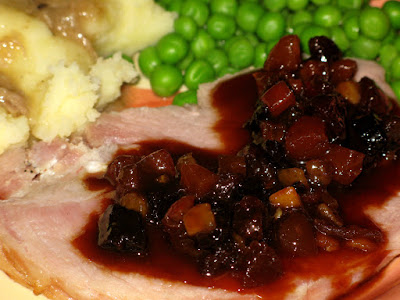 In my family we wait till after dinner on new year's day to set the xmas pudding alight and make our wishes before eating the dessert with warm home made custard. The fiery pudding is always a spectacular sight, as the lights are out and the flames light the room. The blurry picture can show only a fraction of the real thing. 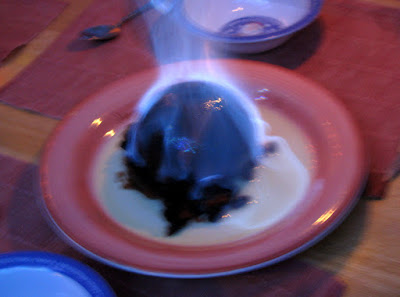