Though it seems like ages ago now (the beginning of the month), I am still amazed by my memory of Strokkur at Geysir. 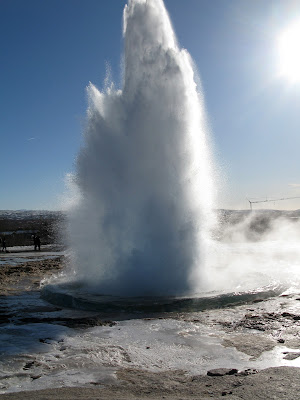 One of the many wonders of Iceland, Strokkur is such an active geyser. It spouts every few minutes, eliciting the wow response each time! Absolutely amazing too, is the clear blue sky. As the geyser was gearing up to spout, one could actually view the ground seeithing and bubbling. Just a split second before blowing, a huge bubble would form and reflect the blue sky. Needless to say, this part of the process is near impossible to photograph -- just put the camera down and enjoy (and buy the fridge magnet at the airport that shows the bubble). 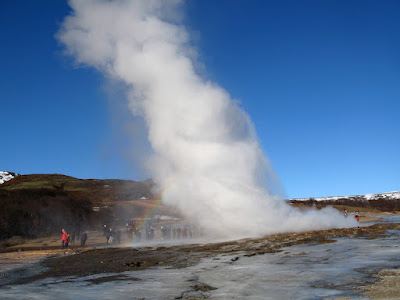 The whole area of Geysir is steaming. It reminded me of "the Dead Marshes" from Lord of the Rings (perhaps Tolkien's inspiration?). 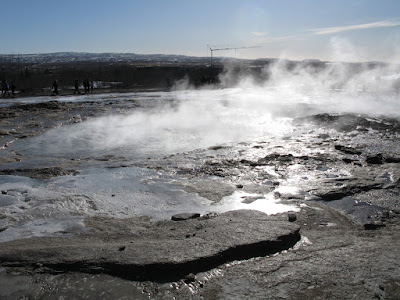 The original geyser isn't actively spouting anymore, but the hole in the ground is still steaming. 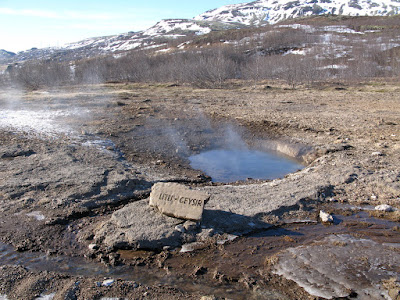 After our visit to Geysir, it is only about a ten minute drive to Gulfoss ("Golden Falls"). Did I mention that it was cold? The falls weren't completely frozen, but there was a lot of ice... 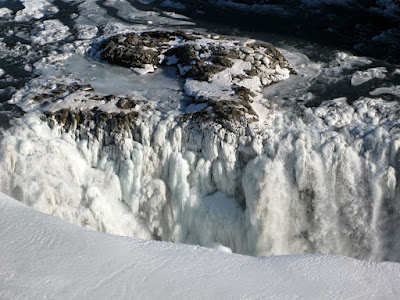 Gulfoss is a terracing falls, and incredibly gorgeous. Some crazy person went beyond the barrier to get a closer look (you can see the tracks in the snow). I believe you can traverse footpaths in the summer months, but with the cold and the wind in early March, seeing the falls from a distance is enough. 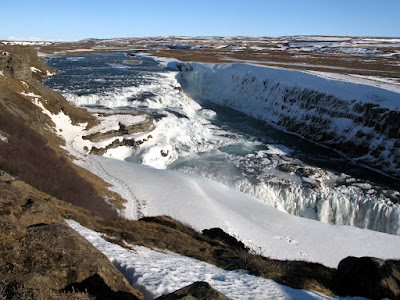 From any large waterfalls in the wind, one always gets a spray, but here the spray was ice particles, so we were feeling a bit sandblastted. Did I mention that it was cold? Gorgeous regardless. 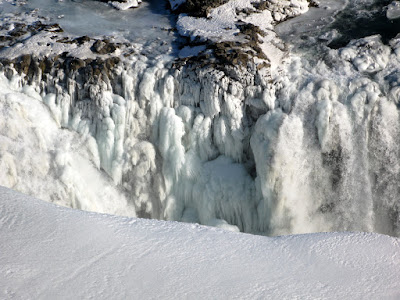 Posted by Lorraine Whelan at 10:18 No comments:

As our time was so limited in Iceland, we had made a schedule of things we wanted to see and do. We were faithful to our schedule! So having been to Thingvellir to see the tectonic plates on our way to Laugarvatn, and spending a few hours stargazing at the thermal baths of Fontana Spa on our first night, we were up early the next morning to check out the Kerid volcanic crater, which was less than a half hour drive from our apartment. 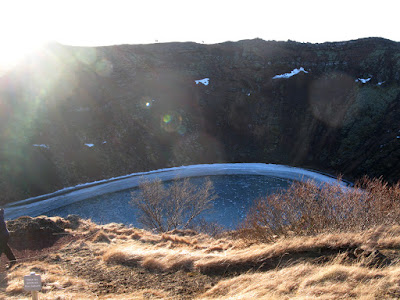 It was a beautiful day -- sunny and bright -- but it was COLD and WINDY. There was a path leading down to the lake, which is at water table level, not rain-filled. 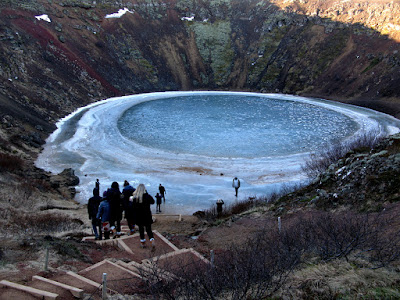 It doesn't look like it in any photo, but this lake is completely frozen over. The idea that there is wave action is an illusion; this is ice! 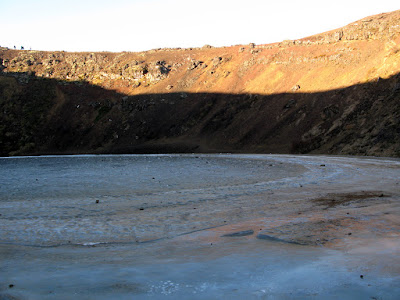 The spots on the lake are fallen debris from the crater, probably caused by the high winds. As I said, this lake is completely frozen. Apparently it is not a deep lake (when liquid) and the ice was quite solid. While we were there, someone did walk out to the centre; there was really no worry about the ice breaking. 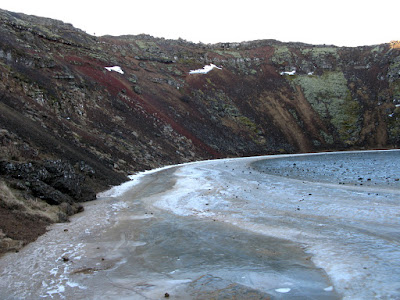 For our elevenses, we drove back to Laugarvatn to go on Fontana Spa's "Rye Bread Tour". The nearby geothermal station heats all the buildings in the village and its surrounds. 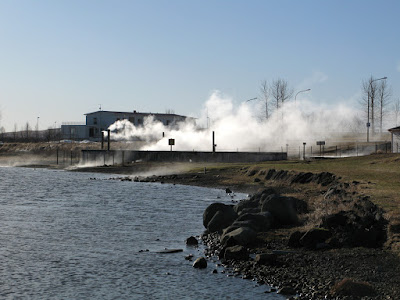 Fontana Spa (which also has a restaurant) makes use of the hot shoreline, not just for the spa, but for baking bread! 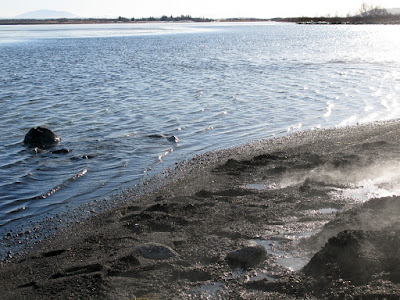 The bread dough is sealed in a pot and buried in the hot sand. It takes 24 hours to cook, so they dig up a loaf and put a new pot in twice daily. 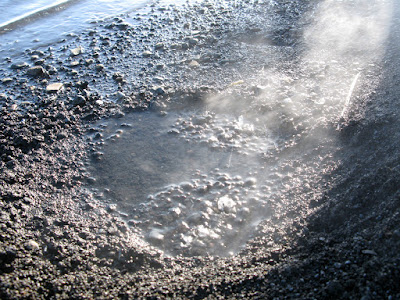 This traditional Icelandic recipe is delicious! As part of the tour, we returned to the spa to sample the bread warm with wads of Icelandic butter. Oh that was a really good elevenses! 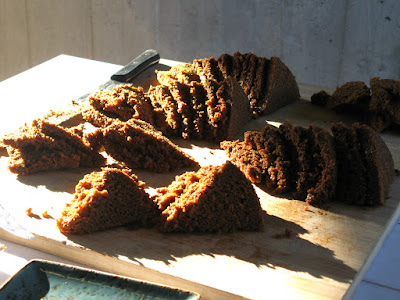 After filling up on the rye bread, we went for a walk by the shore (being careful not to walk in any steamy sand). This jetty leads out from the spa, and on days when it is not quite so icy, spa-goers can go directly from the hot baths to a dip in the lake. 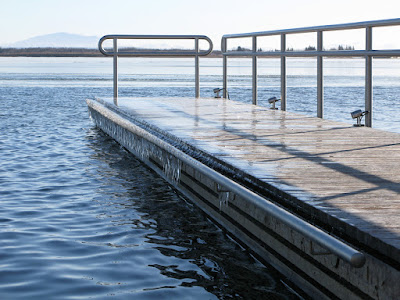 The view of the lake and surrounds from Laugarvatn is gorgeous. 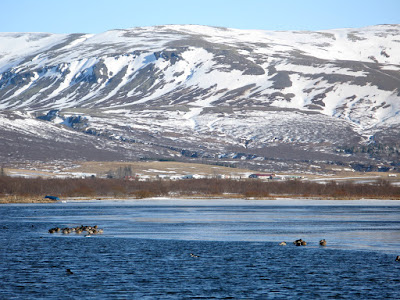 Posted by Lorraine Whelan at 09:31 No comments:

The beginning of March brought with it a collision between Storm Emma and "the beast from the east", resulting in huge snowfalls in Ireland, closing Dublin Airport for a day and most annoying of all, disrupting my holiday plans! Though the airport had reopened in time for my plan to take off on the Saturday morning, there was no way for me to get to the airport -- my estate was snowed and iced in, roads in my town impassable, and no bus or train service till that afternoon (too late for me!). After re-scheduling the departure for the earliest date -- 3 days later -- I got to have a whirlwind trip to Iceland. It was beautiful & cold, the sky a pure blue, and lots of mountains were visible. This is the view ahead, driving on the Golden Circle road towards Laugarvatn, from Kevlavik (Reykjavik airport). 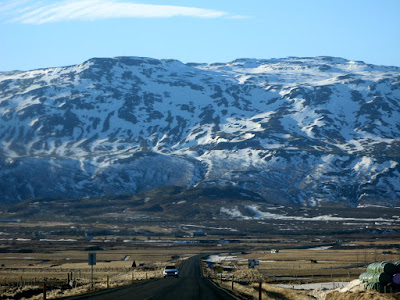 As both a stopping point and a site of interest, we went to Thingvellir National Park. Driving up to the park, I was amazed at the oddness of the lake view. It struck me like a frame of a film of a lake --  I could see motion in the water, but it was stopped. The lake was frozen. 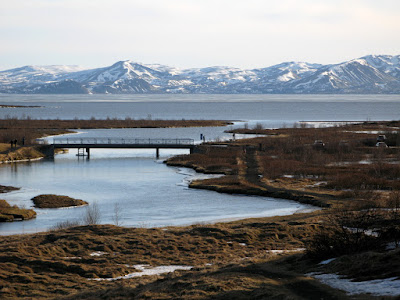 The land is rugged and there are trail pathways for explorers. However, it was just too cold to do more than an hour's wandering at a time. 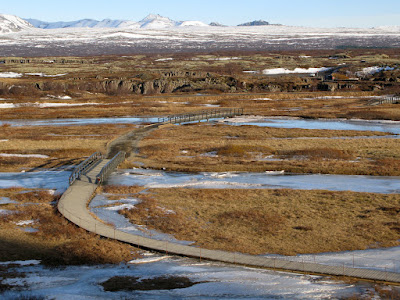 Thingvellir is where the Eurasian and North American tectonic plates meet visibly, and actually pull apart at the rate of 2 cm a year. There is a valley pathway between the plates. 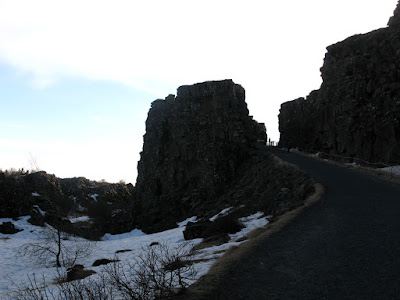 Just before sunset we arrived at our accommodation on the outskirts of Laugarvatn: The Golden Circle Apartments are a complex of three private buildings of comfortable, self-catering apartments. 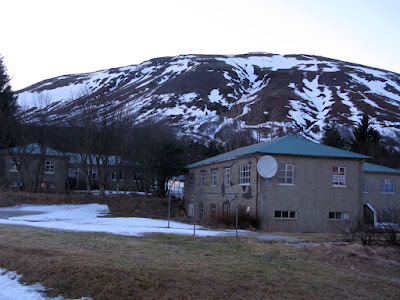 Inside our apartment, we were especially delighted with the view from our main living-dining room. The flags on the right mark the location of Fontana Spa, a one minute walk away. Of course we headed down there once we were settled and enjoyed an evening of hot and cold relaxation. The night sky was incredible from the luxury of the spa. 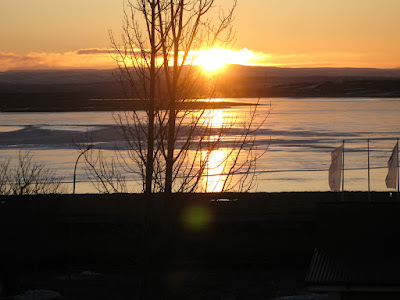 Posted by Lorraine Whelan at 10:14 No comments: