Good Morning. How are you?

I've started work on a small, hand-made book project. Very simply, the books will be less than 10 pages , five of these pages being lino prints (two text, 3 images) and each book series in an edition of 10. Each series will be in a different language - starting with English, Irish and Spanish. The first & last prints in the book will be simple texts "Good Morning" and "How Are You?" The three other prints, separating the texts, will be simple images - a teapot, two mugs, a boiled egg. Existential breakfast. Here goes. Tools for printing. 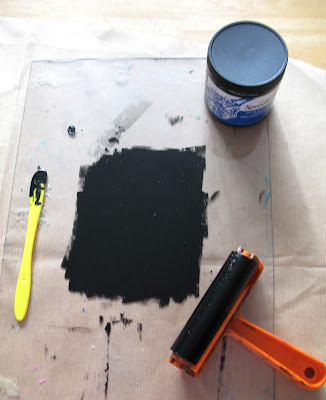 Trusty wooden spoon technique rubbing the print into being. 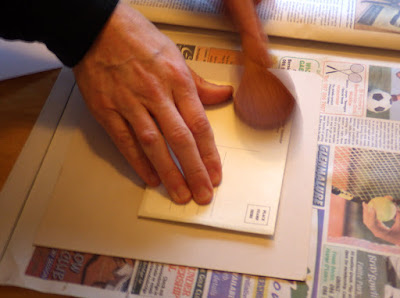 The inked lino blocks after a series of test prints. 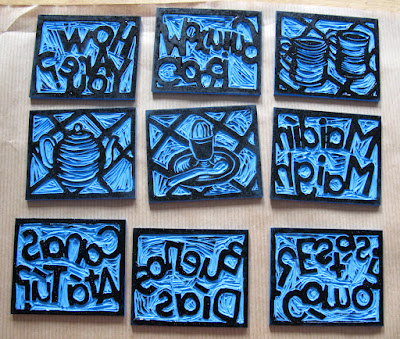 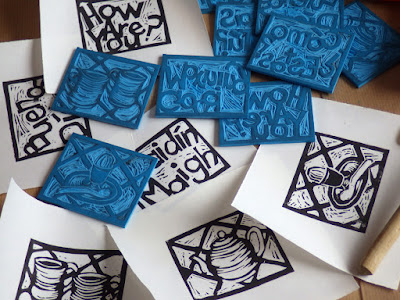 I have decided the final books will be printed on heavy Strathmore paper and the cover will be corrugated cardboard. I will bind them simply, using the Japanese stab-binding technique, with a different coloured cotton thread for each language edition. Here are the test prints for the Strathmore paper. I have since been informed by trusty, Gaelgor (Irish-speaking) sources that I made spelling errors in the Irish text for "Good Morning" (should be "Maidgin Mhaigh") so I am cutting a new lino block today. But here are the Strathmore paper test prints drying. 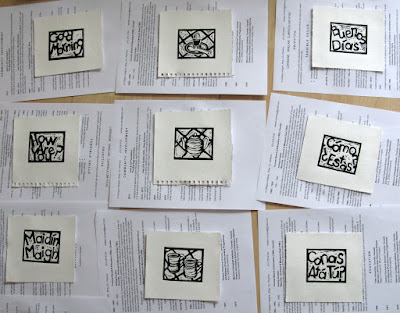 My daughter was at summer college in the Connemara Gaeltacht, so while visiting on family day one Sunday in July, we had prepared a picnic and did the very scary drive from Lettermore to Oughterard. My trusty (though now out of print) Guide to National & Historic Monuments of Ireland, by Peter Harbison, had alerted me to the existence of Aughnanure Castle, 2 miles outside Oughterard. The castle is surrounded by a beautiful moat - the Drimneen river. 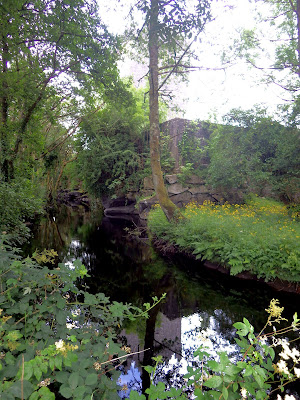 The original castle dates from the 13th century, but what stands there now is a 16th century tower house castle. 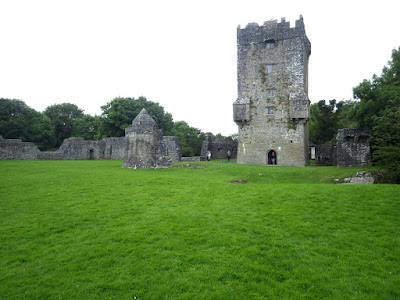 The sentry stairs are completely intact, but. for health & safety reasons I'm sure, there is a "no climbing" sign nearby. Authenticity is maintained without a safety hand rail. 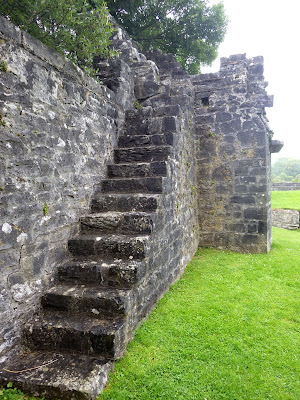 One can enter the tower, walking up spiral stairs to several large rooms, but it is the out buildings and walls that are most interesting. 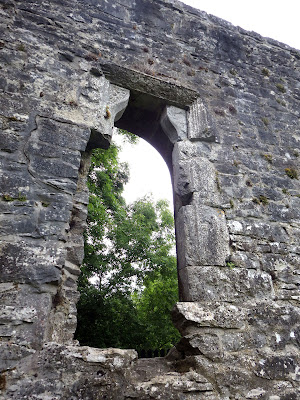 I almost missed the amazing carvings on the windows as they are only visible from one side of the wall. 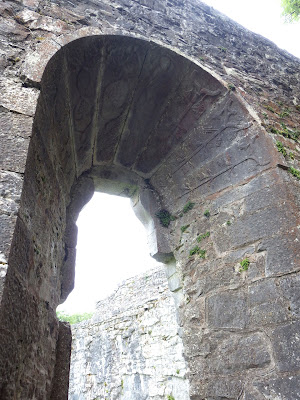 Several windows had these intricate carvings on them, and one had to walk on what one would consider the exterior in order to see them. 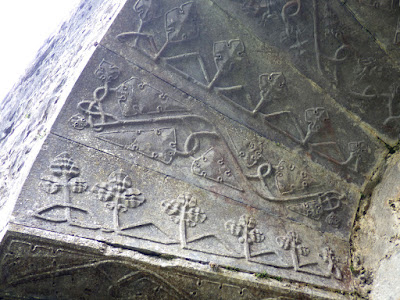 In fact, the wall was not an exterior wall but an interior wall marking the banquet hall, which was no longer apparent. 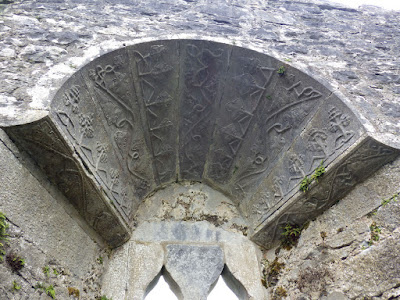 In July I went to visit my daughter who was in the Gaeltacht of Connemara, but on the way there stopped at the relative half-way point at the sixth century monastic site, Clonmacnoise in Co. Offaly. Situated at the crosspoint between an ancient land route running east-west, the Eiscir Riada (an esker), and the Shannon River running north-south, Clonmacnoise was a busy place in its ancient heyday, and therefore there were also lots of battles and sackings there. The tour guide admitted that the Vikings got a bad rap here, as most of the trouble that ever occurred historically had to do with squabbles between small Irish kingdoms and tribes. 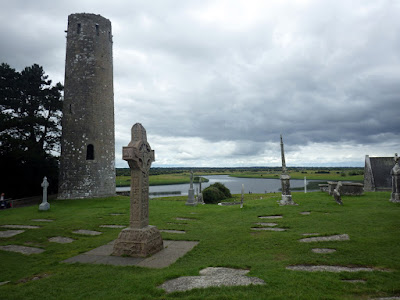 The site is quite large, with lots of unusual features, including 2 round towers. Apparently a very tall round tower was hit by lightning in the twelfth century and the second tower was built using the stone debris from the top of the first tower. 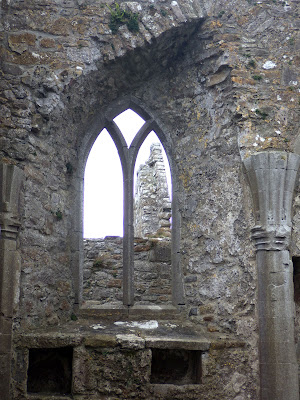 One of the high crosses as seen from the portal of one of the seven churches on this site. 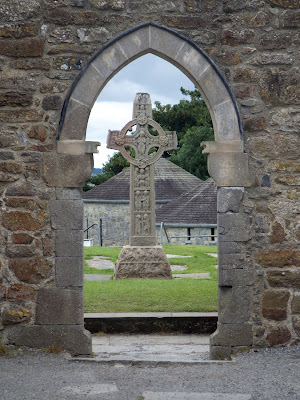 The high crosses on site are replicas, with the originals being preserved in the Visitor Centre museum. 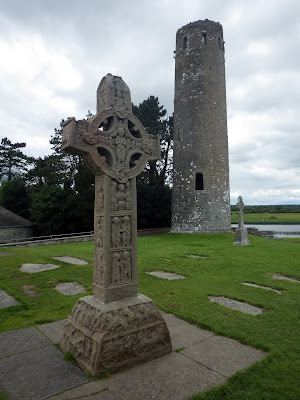 The crosses marked an area of sanctuary, but one of the crosses may originally have been a pagan slab, as indicated by its carving of a non-Christian fertility god, Cernunnos (with a ram-like head). 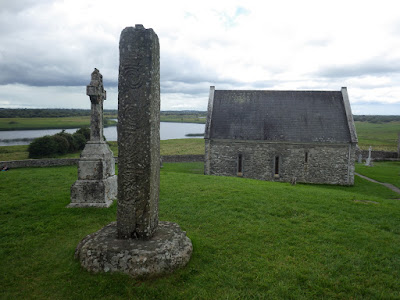 The tour guide pointed out a new "pagan" tradition that had only started this year (2016) -- tourists were leaving money at the foot of this cross slab within one of the churches. 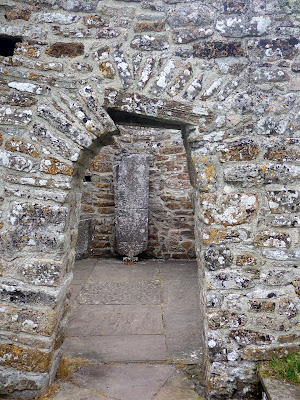 A view of the Shannon river from the side of the Pagan cross slab. The carving a cross-legged, ram-headed Cernunnos is apparent. 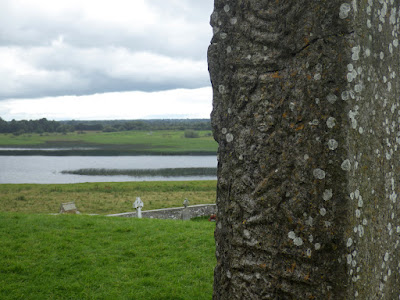 Posted by Lorraine Whelan at 21:22 No comments: