Hot on the heels of seeing Daphne Wright's "Ethics of Scrutiny" curated exhibition of The Freud Project, I attended a day long symposium at the Irish Museum of Modern Art (IMMA). The programme of the symposium "Rethinking Freud & The Contemporary" was wide-ranging and fascinating. 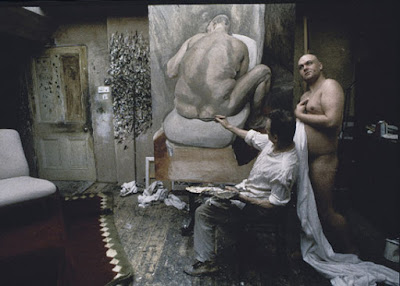 The above photo by of Freud painting performance artist Leigh Bowery, taken by Bruce Bernard, along with a picture of the Courbet painting it emulated (below), was referenced several times during the day by different speakers. 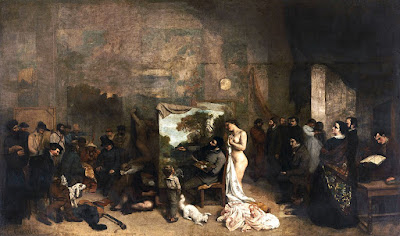 The various speakers -- curators, artists, writers -- were all fascinating and added to the understanding of Freud (both his work and personal life). I was especially interested in what the artists had to say. Painter and inaugural Hennessy Prize winner, Nick Miller spoke about studio practice and portrait painting, and Daphne Wright, in conversation with writer Brian Dillon, spoke about her responses and choices as an artist curating the exhibition. Later in the day, the three Freud Research Residency artists spoke about their projects in response to the Freud Project at IMMA. Laura Fitzgerald's presentation was both humorous and significant as she, perhaps not intentionally, focused on portraiture. Sue Rainsford (collaborating with Bridget O'Gorman, who was not able to attend) discussed her project, A Knowing Body, which is at once both an intellectual and visceral development of work that takes a huge leap away and towards Freud! 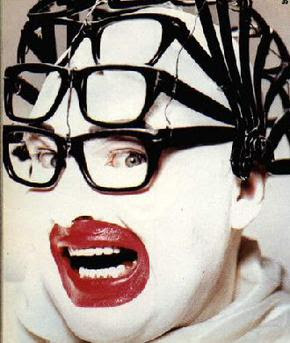 Performance artist Richard John Jones presented possibilities of work that echoes the relationship between Leigh Bowery and Lucian Freud. The eccentric Bowery was both a model and muse for Freud, the fleshy, nude portraits in many ways antithetical to Bowery's performance "disguises". 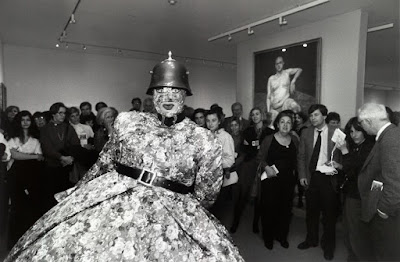 I find myself ever more curious about Bowery; I am a fan of the 1990s Simon Pegg tv show vehicle Spaced. I love the "Art" episode, and though I did not know at the time I first saw it, Leigh Bowery must have been the reference for "Vulva", the former partner of artist character Brian. Brian's wistful remembrances of performance duets, in flashback, are both hilarious and recognisable to anyone who has every experienced the absurdities of some performance art. 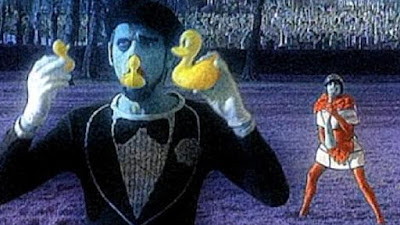 In 2016 the Irish Museum of Modern Art (IMMA) opened the Lucian Freud Project, dedicating the whole of the Garden Galleries (a small building) to the work of Lucian Freud for the following five years. I had seen that exhibition, which included paintings, works on paper, and prints along with copper plates that he printed. It was great to see so much of Freud's work in one place, but I wondered how IMMA planned to keep this exhibition fresh over the extended period. 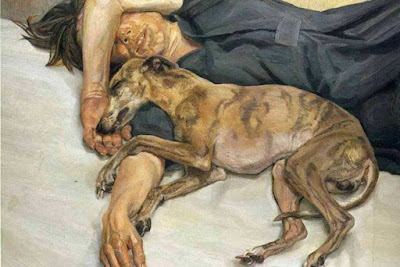 Interestingly and intriguingly, IMMA decided to invite guests in to curate exhibitions around the specific collection that was on loan. The first of these exhibitions opened in mid-February; "The Ethics of Scrutiny" was curated by artist Daphne Wright. I went to the exhibition two weeks ago, totally curious as to how curation was going to change the exhibition. It was fantastic! 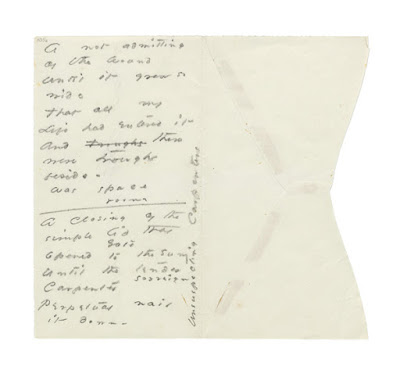 The first small gallery was a pleasant portent of things to come: dimly lit and reverent, on one wall there were some watercolour botanical drawings by Sigmund Freud (Lucian Freud's grandfather) and in the middle of the room a horizontal display case containing a number of reproductions of Emily Dickenson's "envelope poems". On a further wall was a small painting of Freud's that scrutinised the us, the audience, daring us to look closer. Each room that followed was a sparse but intense exploration of the curatorial theme. Wright made this a multi-media exploration with lightbox reproductions of Gwen John paintings and the sound of exhibition hub-bub in one room, and a reading from a short story in another. I especially was interested in Wright's subversion of what is normally thought of as a "male gaze" as she included artwork and writing by women. 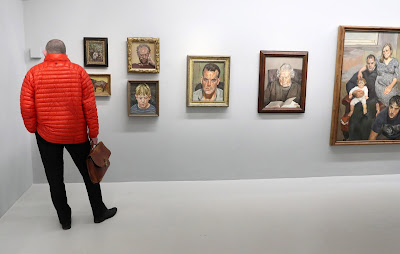 In the large basement gallery, there were a lot of Freud's paintings for individual examination and two video monitors taking centre stage in the room. The videos were clips of John Berger in Ways of Seeing, his 1970s BBC series. In the clips he was analysing the historical view of the female nude. 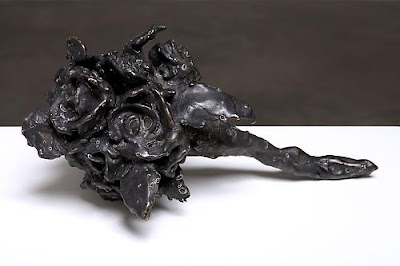 In several rooms upstairs, Wright again juxtaposed work by other artists with key Freud works relevant to the theme of scrutiny. I loved seeing Kathy Prendergast's bronze sculpture Little Bouquet (2007), a piece of family history & memory, and also seeing a plant on the window ledge whose didactic informed that it was grown from a cutting of a plant belonging to Sigmund Freud. There was an audio of plant biologist Ottoline Leyser discussing plant intelligence. 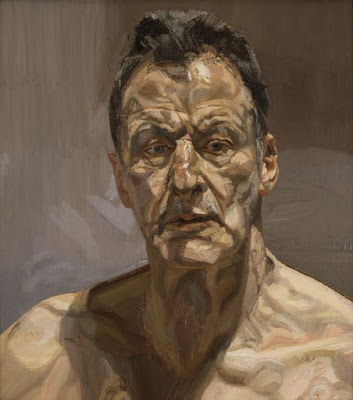 In the final room there was a sculptural work by Thomas Schutte (which could be seen as portaits of an artist) and Freud's moving self-portrait. Doubly moving was the sound of Bernie Brennan singing the Nine Inch Nails' song Hurt, much in the style of the legendary Johnny Cash's brilliant cover of this song.
Posted by Lorraine Whelan at 09:28 No comments:

My foody niece, who owns and operates the Wild Geese Food Company, gave me this very simple, easy to make and extremely tasty recipe for Porridge Bread. 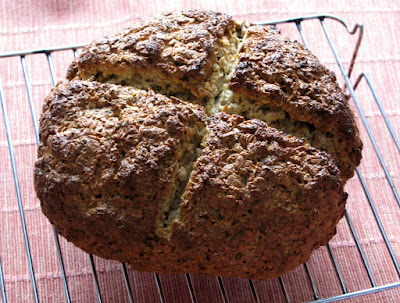 You will need: 1x500g tub of plain yoghurt (I use Greek style myself, and you can also use a dairy-free yoghurt);  2x500g yoghurt tub measures of oats; 2 tsp bicarbonate soda (aka baking soda, aka bread soda); 1 tsp salt. Optional: raisins or other chopped dried fruit for a sweeter bread; basil, oregano or other herb for a more savoury flavour. As my niece said to me, this recipe "is a great base, mix in nuts, seeds, dried fruit (dates are amazing), herbs, parmesan, sundried tomato". It will be your bread, experiment with it! 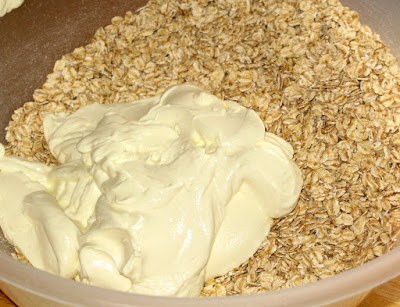 Mix the ingredients together in a large bowl. 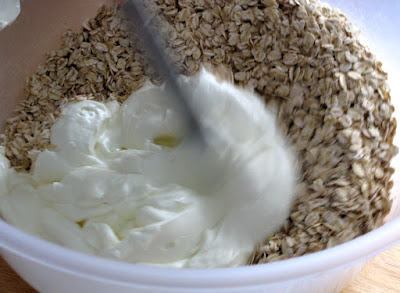 It will become obvious when mixing with your clean hands makes most sense. 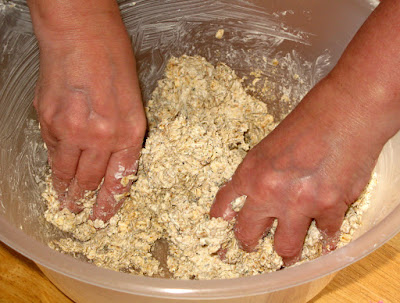 Form a bread round; it is moist but will hold it's shape.  Place on a greased baking tray and cut an X in the top of the bread. Bake at 180C for 40-50 minutes (NB, this time also depends on your oven; my oven was pre-heated and it was ready at 35 minutes). 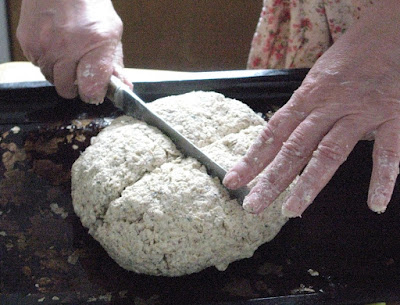 The temptation is to start eating it as soon as it comes out of the oven, but try to let it cool for a bit, otherwise it will be really crumbly. I think I waited about 15 minutes before slicing a few pieces, but it was still warm. Yummy! Thanks, Tara! 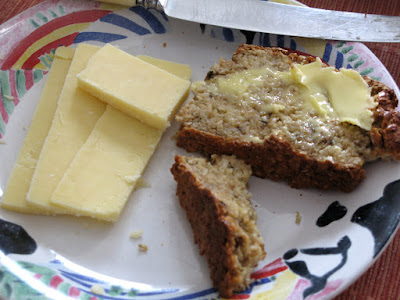 In the ceramics workshop that I am participating in every Thursday afternoon at Signal Arts Centre (near where I live), I decided I wanted to make a few handbuilt bowls using slab and flat coil techniques. 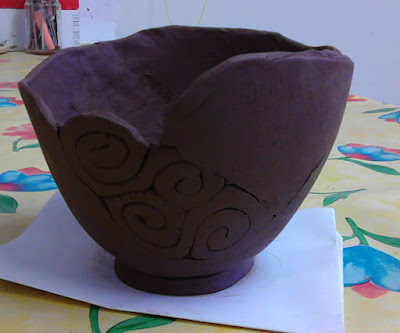 I used pudding bowls as formers, lined first with cling film to ease removal of the bowls when finished. With flat coil technique, one simply rolls coils and presses them into areas left after placing flat clay slabs onto the former. The slabs and coils are joined by working on the inside - pressing the joins together and smoothing. I used terracotta clay for this bowl, with a coil foot. 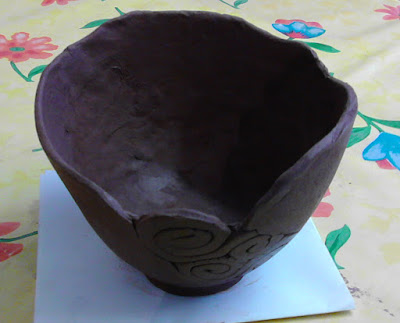 I made four bowls in a smaller pudding bowl with grey clay and rolled balls for their feet. This is how they look bisqued. The cracks on the outside are intentional: they show where the slab pieces have joined; these joining areas are smoothed together on the inside of the bowl. As the feet, whether ball or coil, are attached when the bowl is leather hard and removed from the former, they must be attached using slip and roughing up the surface, as with any other handbuilt pot. I like to use a bit of vinegar too, which is a strong adhesive for clay. 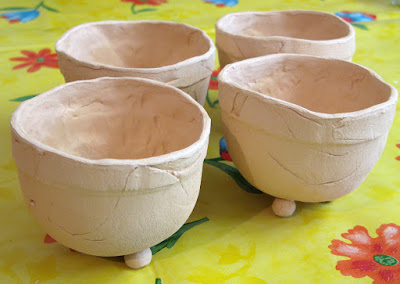 This is the terracotta bowl when it came out of the bisque fire. 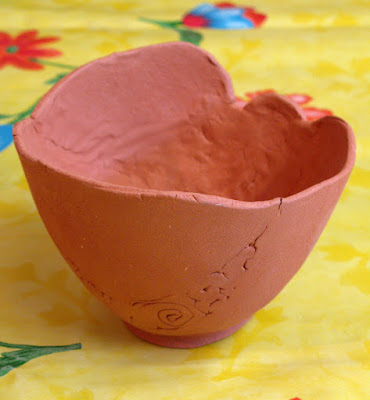 I glazed the four grey bowls with a black glaze all over, but I wiped the glaze from the outside with a damp sponge such that the glaze remained in the surface cracks. I then spattered white glaze on the inside of the bowls. Here are the four "galaxy" bowls sitting happily on their kiln shelf prior to the final firing. 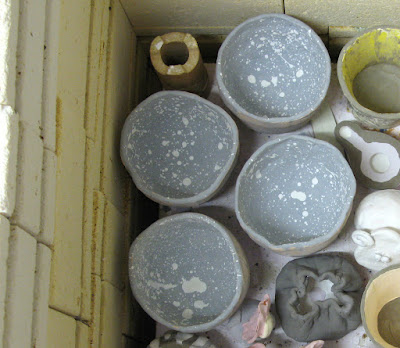 The course facilitator had picked up a new glaze - gold! I painted black glaze on the entire terracotta pot (except the foot of course), wiping the coil areas with a damp sponge before applying the gold glaze. 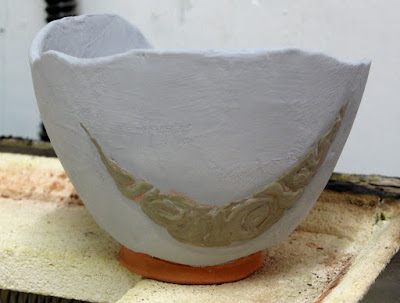 The gold glaze was very liquid so I applied it by carefully trailing the glaze on the slightly raised areas of the coil swirls. As with the four smaller bowls, sponging the black glaze off the coil areas, left some glaze in the deeper cracks. 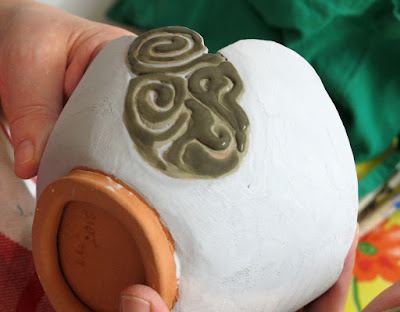 Though difficult to photograph, I was delighted with the results. The black glaze actually has a bluish tinge, and the gold is a gorgeous glaze! 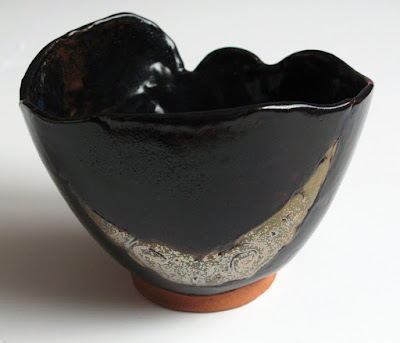 I was also delighted with my "galaxy" bowls. The wiped glaze technique worked perfectly for the outside of the bowls, and the results of the spattered white glaze on the inside were just as I had hoped. In ceramics the best plans can easily go astray in the kiln, so it is never until the last firing that one knows for sure whether a pot has worked or not! 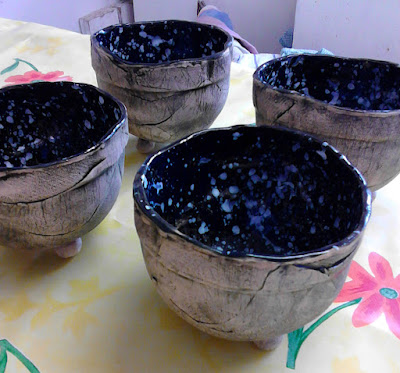