Although the end of June seems ages ago at this point, there is still so much that I haven't described regarding my short break in Edinburgh! The trip coincided with a holiday by Canadian friends who were on this side of the Atlantic. They had rented a car and before leaving Scotland they wanted to go to Stirling Castle. I was invited to come along with them, and since it was horsing down rain in Edinburgh, a road trip was definitely more palatable than wandering wet city streets. 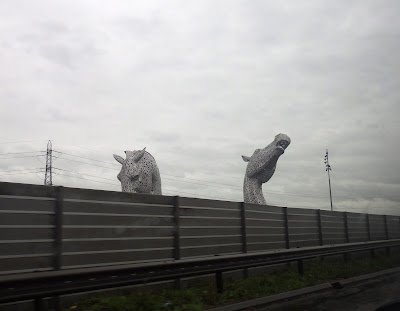 This trip ended up being a highlight for me! A few years ago I had seen pictures of Andy Scott's sculpture "The Kelpies" and was amazed by it. I knew it was sited somewhere in the UK, not in London where I was most likely to make an art trip, so I figured I would never get to see it live. I was so excited when I saw the horseheads peeping over the highway wall on the way to Stirling! 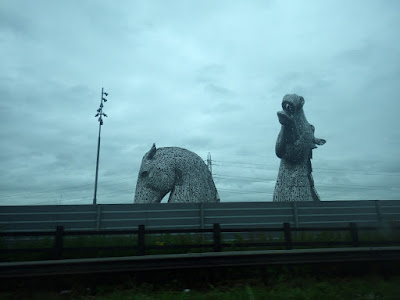 Even just as a drive-by view the sculpture is amazing. The monumental horse heads are 30 metres high each! The sculpture is near Falkirk, so I looked forward to seeing them on the highway back to Edinburgh too. 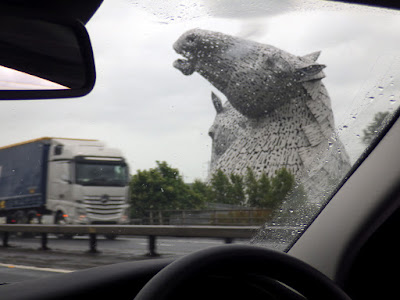 At Stirling Castle a guided tour was enjoyable, despite the relentless rain. The Wallace Monument in the distance was atmospheric. 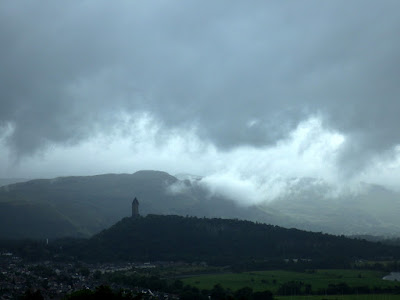 The Stirling Castle complex is huge! 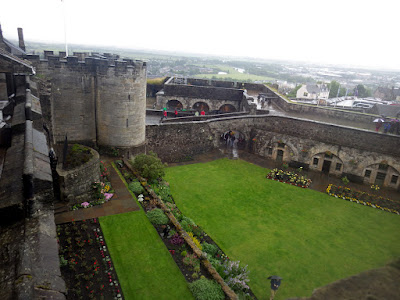 There is plenty to see indoors too (for those moments when one preferred to dry off a bit). There were costumed historical interpreters taking on specific personae scattered throughout -- making history come to life in an enjoyable way. 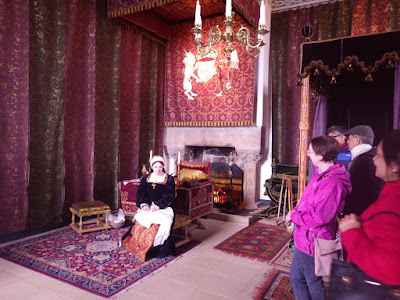 We were up fairly early on our second day in Edinburgh, and went for breakfast with our friends at a smally and lovely Italian café in the Grassmarket area - Caffé Piccolo was delicious! We  could easily have lingered over coffee, but we wanted to get to the castle relatively early and hopefully avoid huge crowds. After climbing about a million steps up to the castle, we did have to wait in a queue for tickets and there was a big crowd, but as we realised later, NOT as big as the later crowd was. 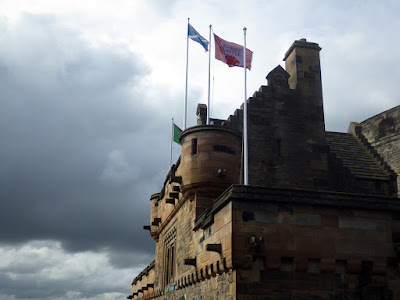 We enjoyed the castle, especially the views of the city. 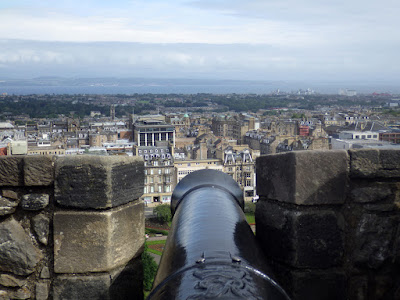 We were wondering about what appeared to be a Roman viaduct in the distance. A tour guide on a walking tour later in the week referred to it as the "shame of Edinburgh": an unfinished monument, but not a Roman ruin. 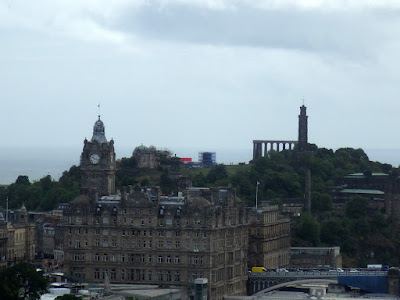 After our castle explorations we went for a coffee and treat on the Royal Mile before embarking on our Ghost & Underground Vaults walking tour. The tour lasts about an hour and is a pleasant way to see a bit of the city and learn a bit about its history. 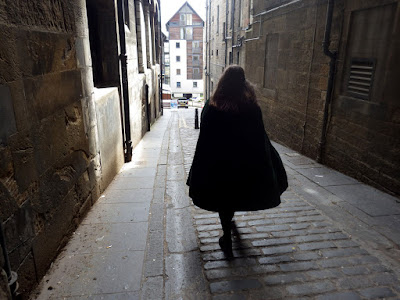 Posted by Lorraine Whelan at 09:43 No comments:

Walking around after dinner on the first evening in Edinburgh, I came across the lovely pedestrian Rose St. The street was full of patio restaurants, cafés and bars and I imagined that it must be really lively during the day, later in the evening and on weekends. Obviously my timing was off, it being a Tuesday early evening. 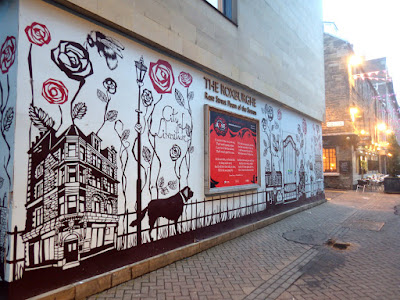 Rose St obviously celebrated poetry as there was a large board with a print featuring "poem of the month". 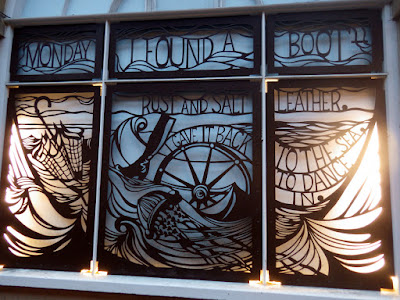 Since the street was not busy, it was great to have the opportunity to get a closer look at things. Most magnificently, there were a series of gorgeous laser-cut screens, illustrating a days-of-the-week poem. 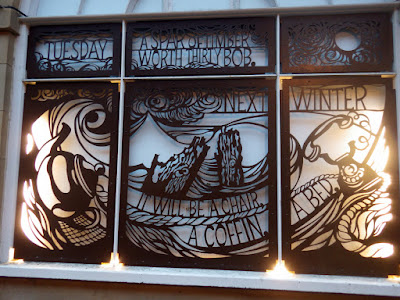 The poem is Beachcomber by Scottish poet George Mackay Brown (1921-1996) and the screens were designed by Edinburgh based artist Astrid Jaekel. Her website can be seen here. 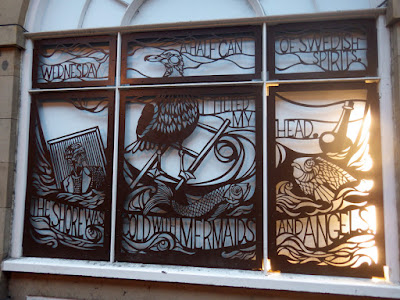 Mackay Brown was part of a group of poets who met regularly at pubs in Rose St in the late 1950s. They are known as "The Rose St Poets". 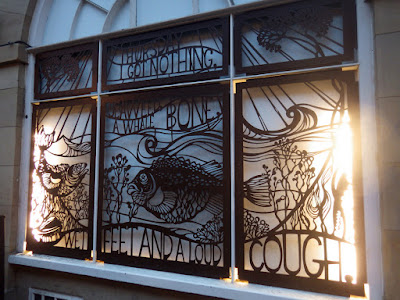 This series is a permanent feature of the street, whereas one may presume that "poem of the month" is temporary. Astrid Jaekel designed the mural and billboard for the changing poem also (first picture above). 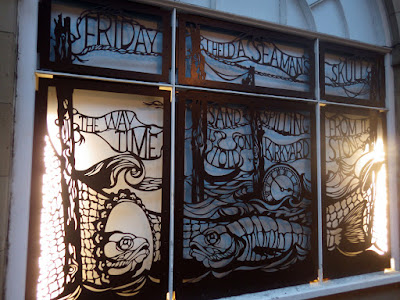 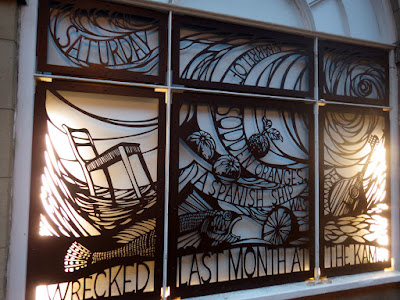 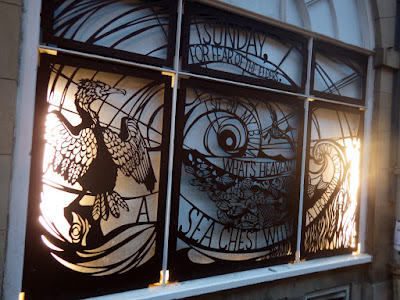 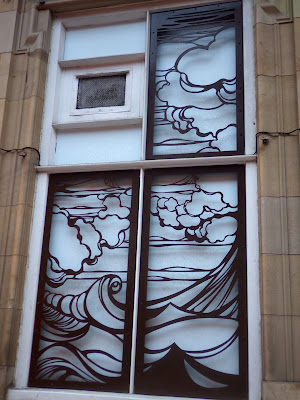 An end screen that includes a plaque giving artist and poet details, as well as the poem Beachcomber in full. 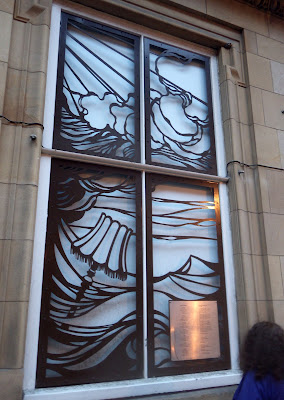 Posted by Lorraine Whelan at 10:57 No comments: 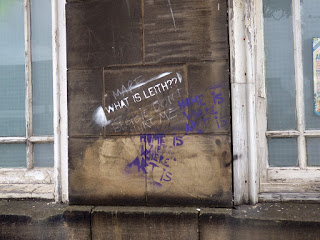 The tour was, as expected from seeing the film, a walk around some of the grittier areas of Leith, but Tim/Mr Bell gave a fabulous background to Welsh's fictional characters through historical and contemporary references. Cables Wynd House, dubbed "Banana Flats", is where "Sick Boy" hails from. 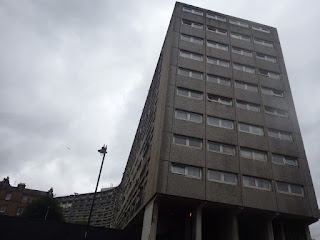 The Percy pub features in a spectacularly racist/bigot scene in Trainspotting. 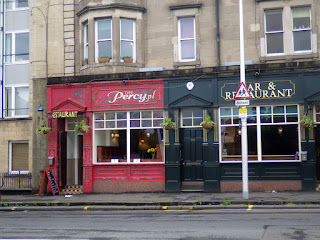 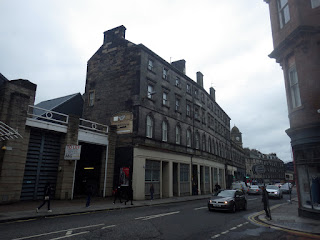 Leith was and is a working class town. On the tour we were also shown reproductions of historic prints showing its former glory as a harbour town. Some buildings survive to show this tale, as this architecture signifying ropemakers shows. 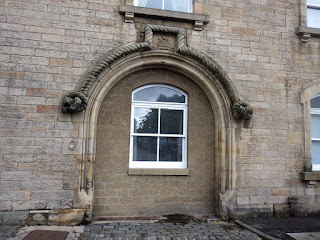 The carved stone decoration is magnificent. 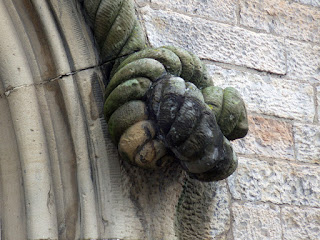 Persevere is the motto of Leith. 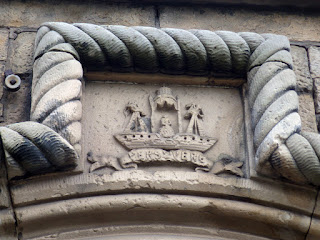 Outside the Workman's Club, Tim Bell shows us the mural celebrating the port heritage of Leith. The mural was unveiled by Irvine Welsh. 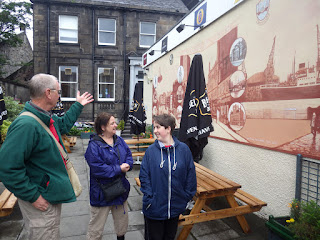 I highly recommend the Leith tour and Tim Bell as a guide full of knowledge, humour and passion for history, literature and social pyschology. What a great start to a short holiday! 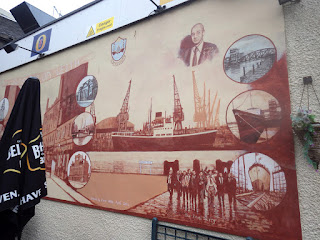 Posted by Lorraine Whelan at 10:37 No comments: