Last week I found myself in Galway during the Arts Festival -- much surprised that I was able to get a place to stay at the last minute (my daughter is in the Connemara Gaeltacht an hour a way from Galway and begged for a parental visit!). Although I have been to Galway a number of times, I hadn't been to the festival since 1988. The weather was great, and it was a short and pleasant walk to the centre of town from the b&b in Salthill. One of the first things to catch my attention was a potter's market in the green area in front of this building with a mural on it. I was hoping for a food market as I was hungry, so didn't spend too much time exploring the potter's stalls. 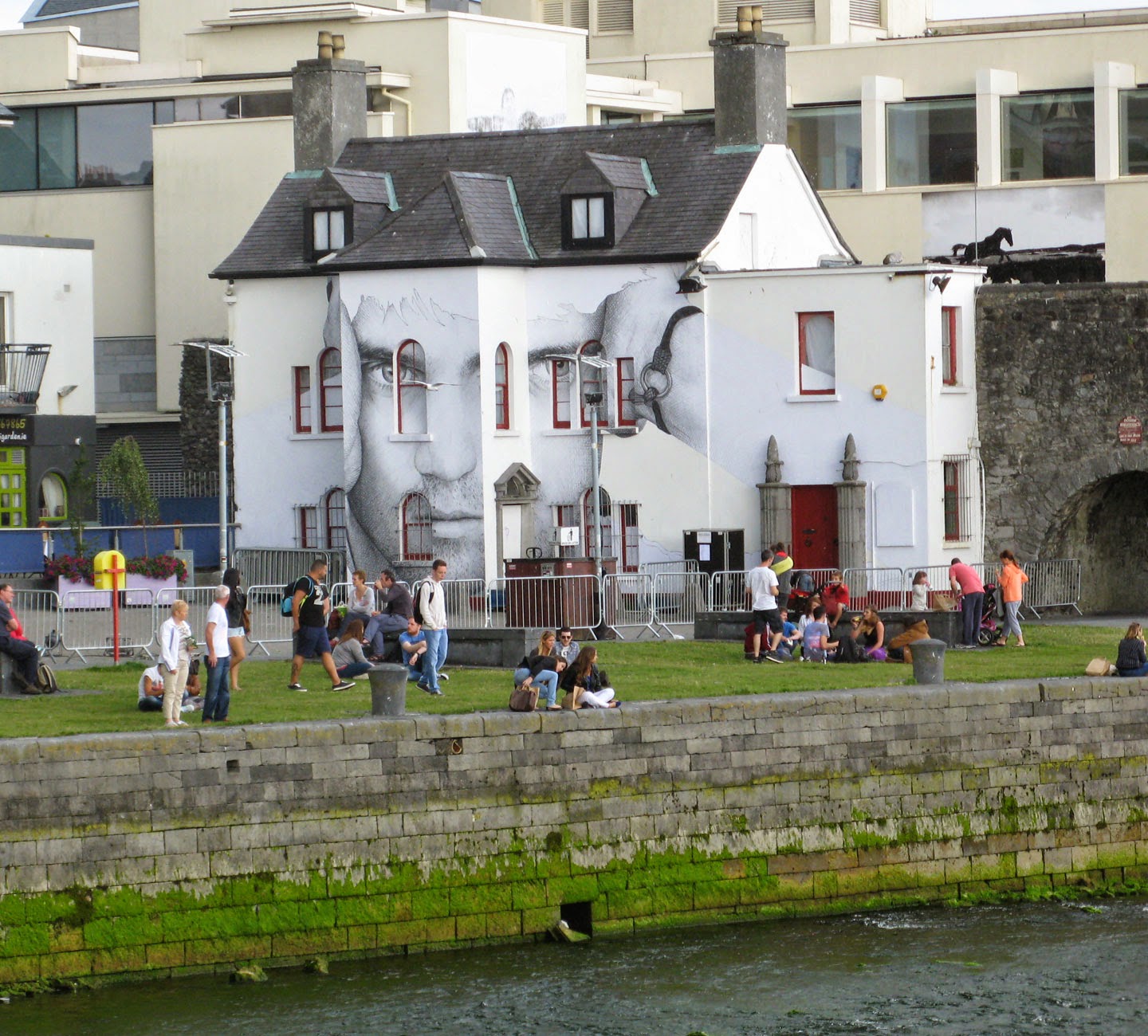 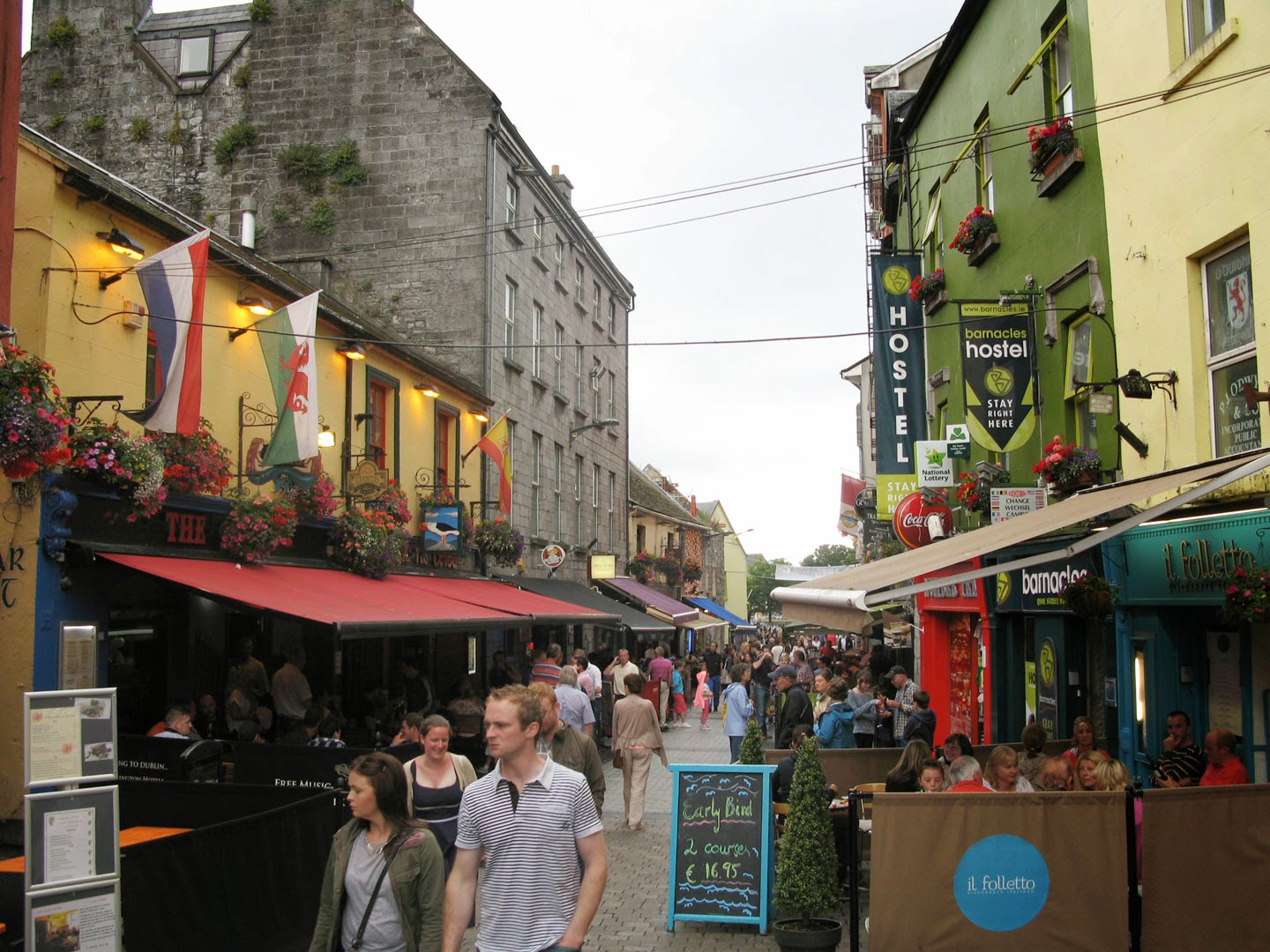 From a distance I thought this public sculpture by John Coll was a religious sculpture marking a church (St. John perhaps?). As I got closer I saw the boat and suspected the bird was an albatross so it more likely is to be associated with Galway Bay which it overlooks. 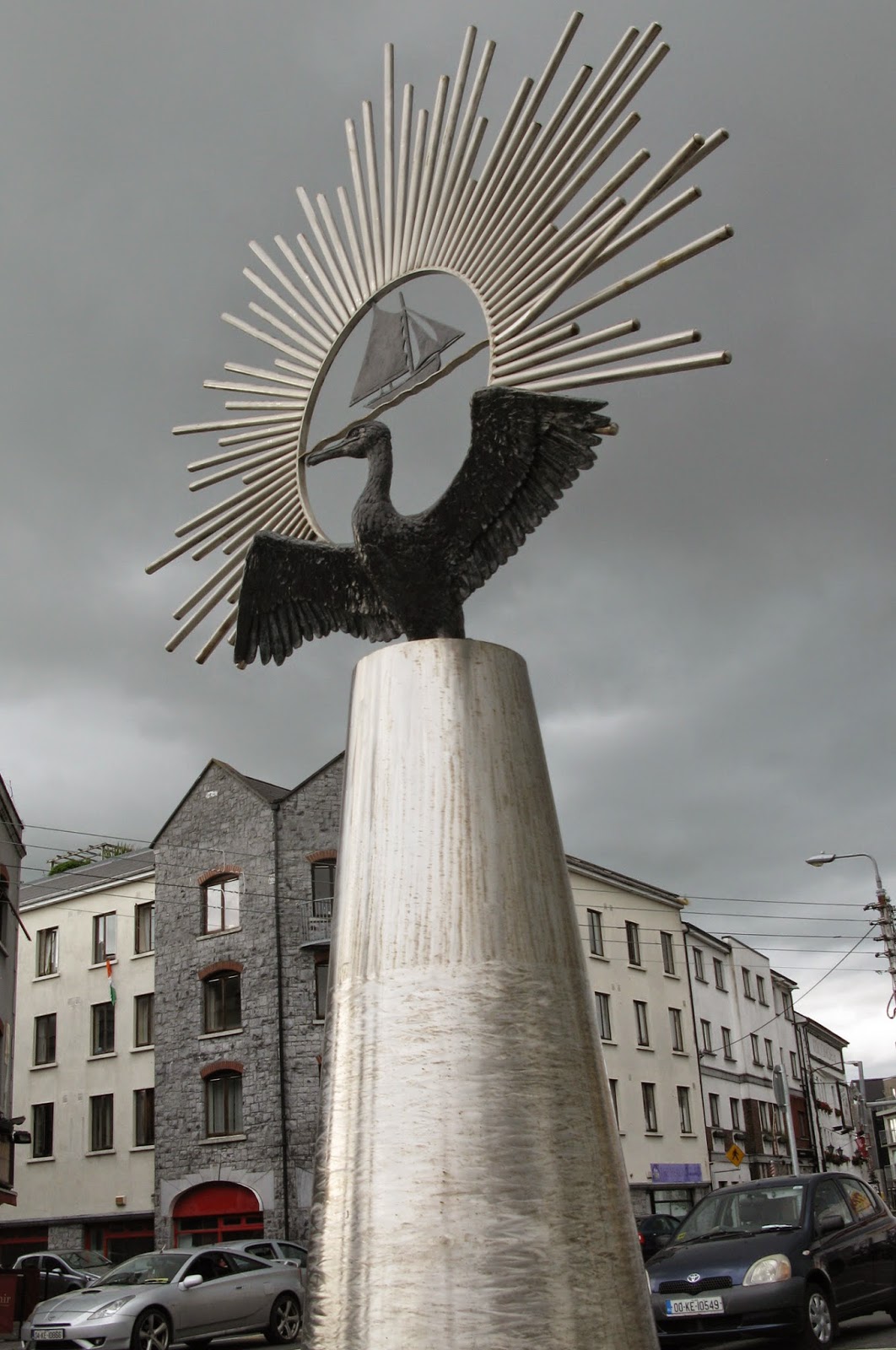 After finding a bite to eat (during which there was a rain shower) I made my way to Eyre Square (aka John F. Kennedy Park). I hadn't notice the Browne Doorway on previous visits to Galway. The doorway was taken from a mansion ruin and relocated to Eyre Square in 1905. 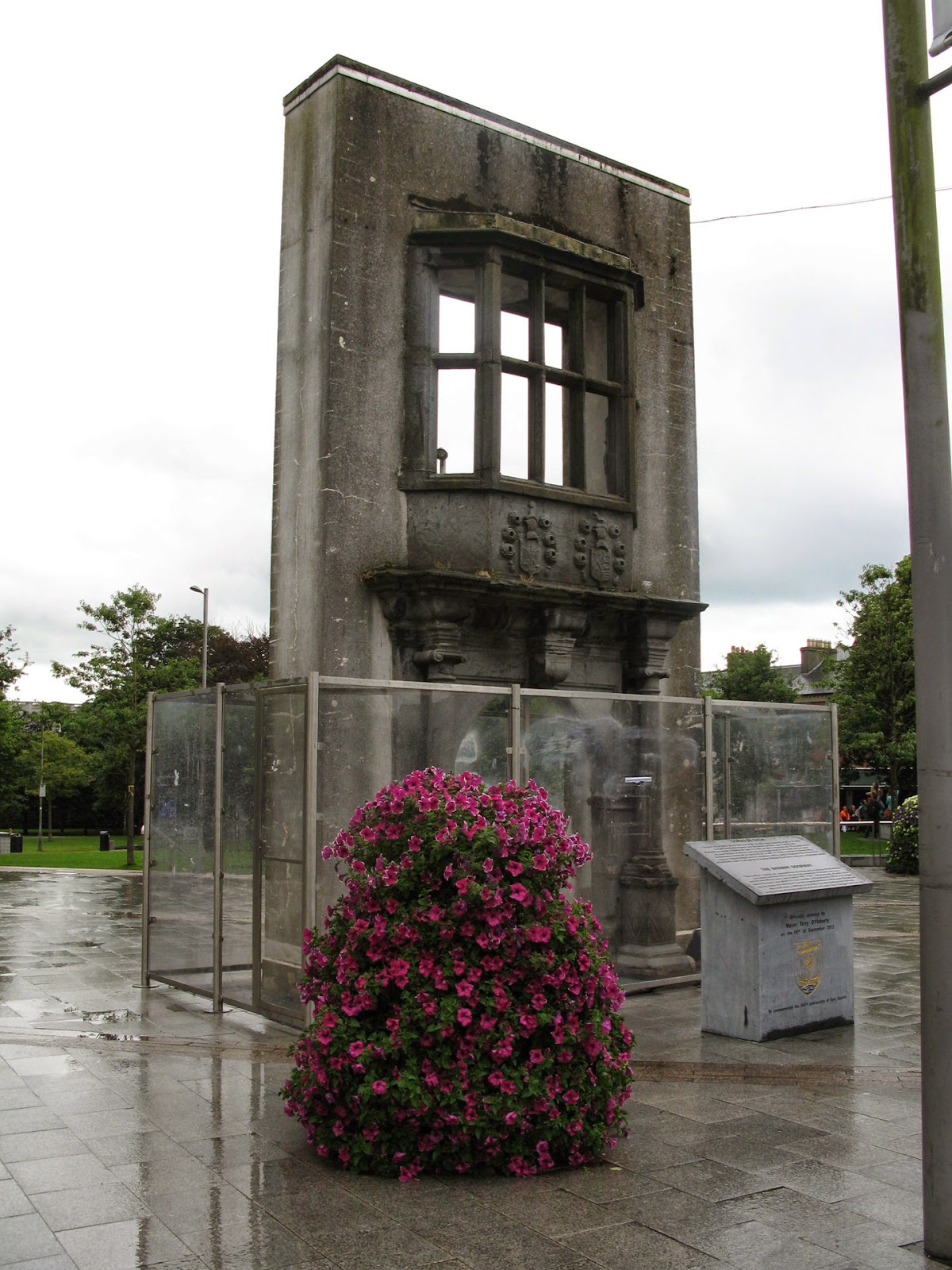 Also in Eyre Square is the steel fountain sculpture created by Eamon O'Doherty. The form of the sculpture recalls Galway hooker sailing ships. 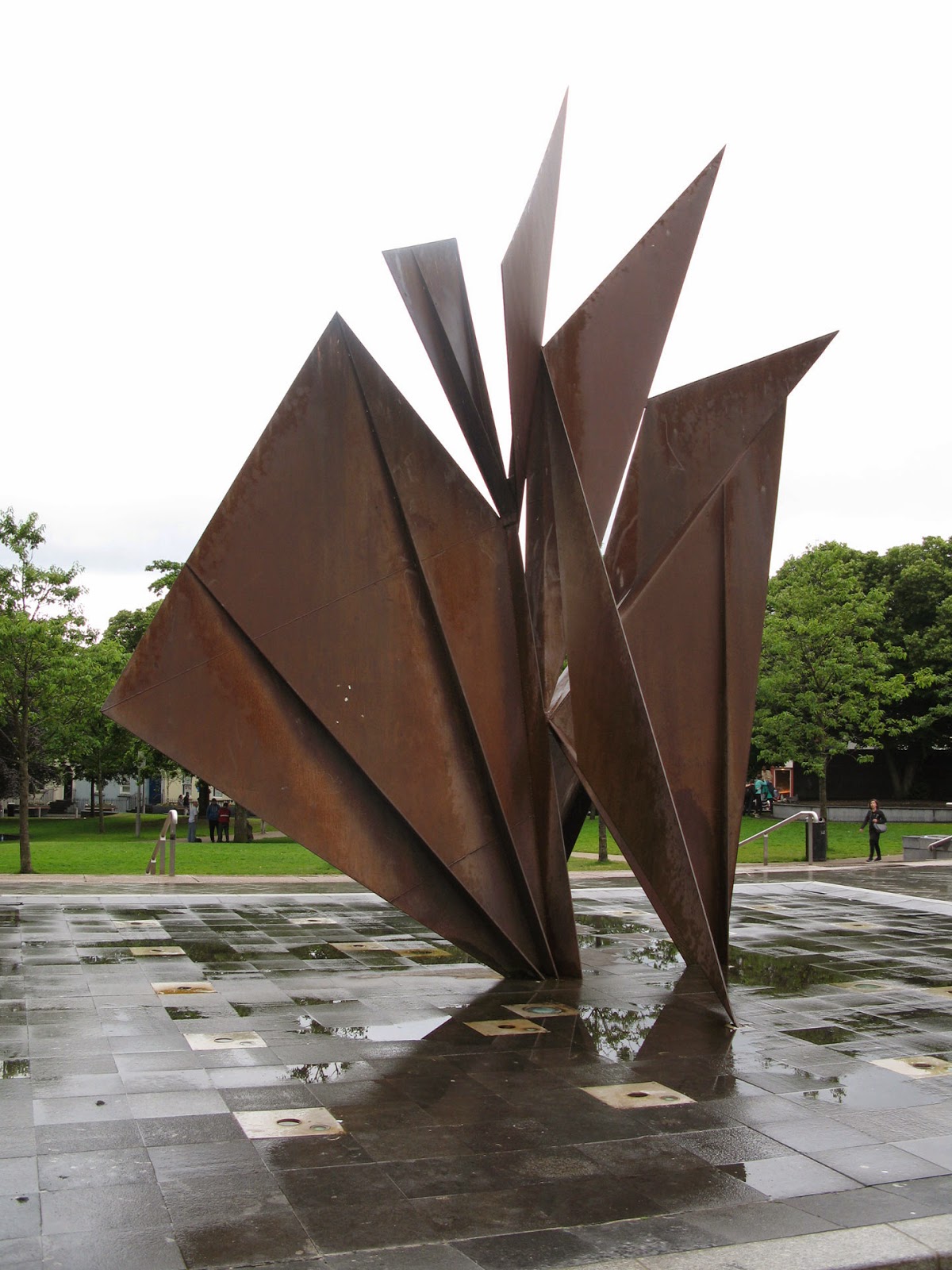 Posted by Lorraine Whelan at 13:19 No comments:

Recently I came upon an image of Andrew Wyeth's painting "Christina's World", a painting I loved as soon as I saw it in New York on my first visit there in spring 1980. It was nice to be reminded of this painting and also to remember it's associations for me and effects on my own work. 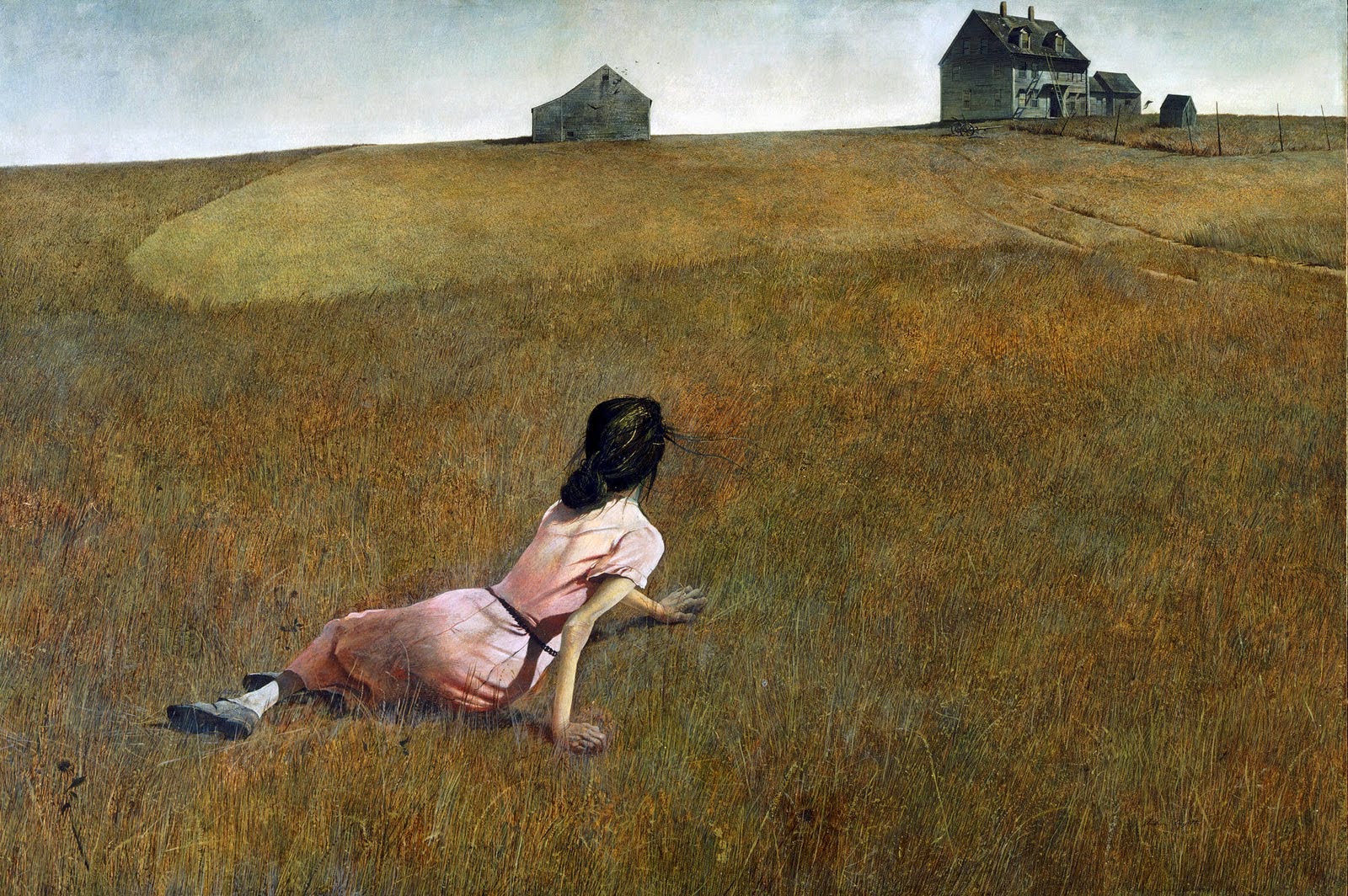 In 1980 one of my sisters, her husband and young daughter were moving back to Ireland. In the week before they left I was minding my baby niece and did a sketch of us (by mirror) which I shortly thereafter turned into a painting, "Me & Jess". In this painting I was wearing my favourite outfit at the time, a turquoise skirt (with tiny Miro-like patterns on it!) and a red tank top.

This outfit later was a way of identifying myself in drawings, paintings and collages. After I finished my Fine Art degree in 1986 I was suddenly hit with a moment of insecurity about my future as an artist. After speaking to a friend about my lack of ideas and unsureness of where my art was going, I could not sleep and had a vision of a series of works which I later came to understand as transformation. I remember clearly leaping from my bed and gathering paper and pastels to furiously draw the images (at this time I was using both hands for drawing) before the idea disappeared. 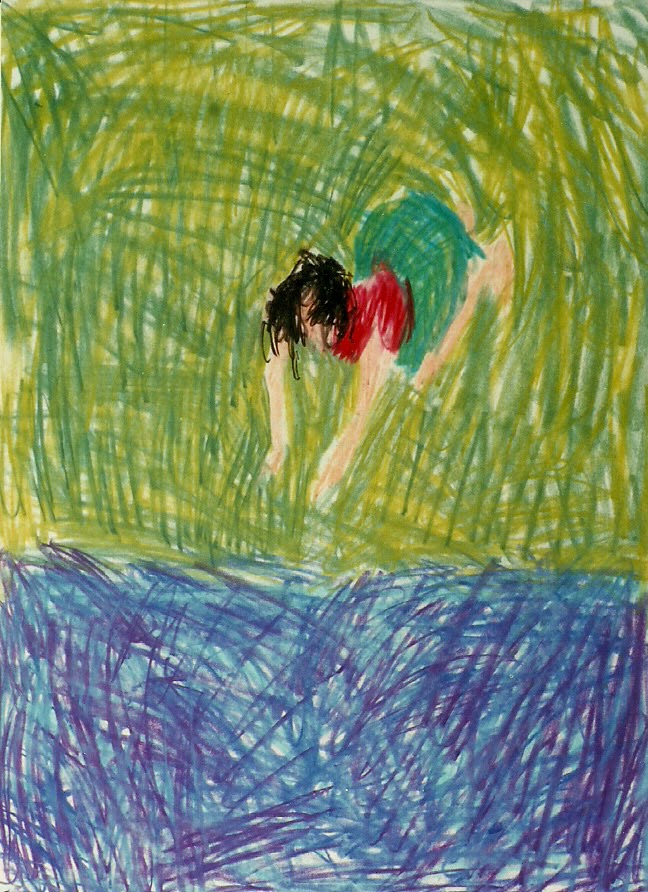 In the first drawing (above) the figure is crawling to the water. This is the drawing which I associate with "Christina's World". In later drawings the figure encounters something in the water - her reflection, her spirit, her home - and becomes one with it before transforming into a red-sailed green boat, sailing through the firmament. This image of the boat often appeared in my dreams at the time, and was most definitely me. The image below is one of the later drawings, where I imagine some spinning happening and the yellow will later turn into stars. 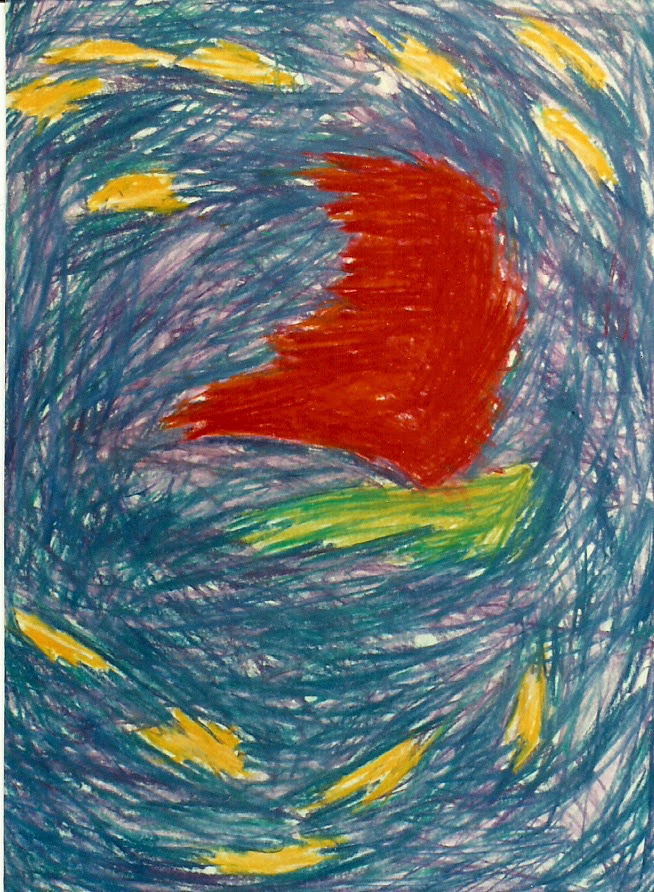 I had planned to do a series of 27 paintings based on these drawings before I turned 28. I did 18 of the paintings, but never felt they had the same energy as the drawings, so abandoned the project as I began other work. I then got ready for my first move to Ireland (Aug 1988) and began my first "Great Purge" in which I destroyed quite a lot of my work and belongings, as I could not store or take everything with me. I did cut out one of the figures from one of the paintings, and that remains with me, in a corner on the wall in my attic. 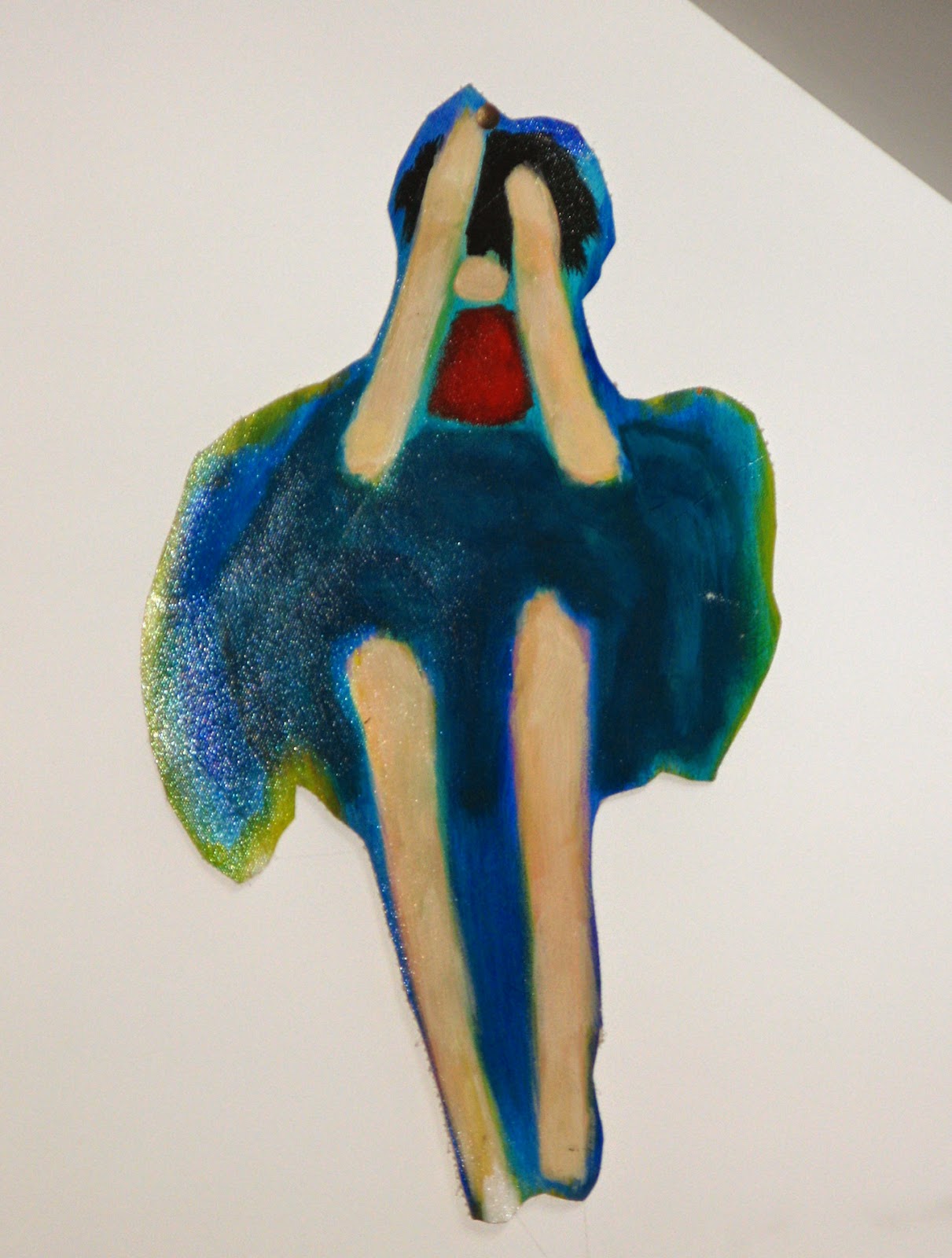 Posted by Lorraine Whelan at 11:58 No comments:

Back in January I came across an article in Brainpickings "How Art Can Save Your Soul" that had a link to the video below:


After watching this I was hooked on Alain de Botton! He is a thinker who speaks and writes with a wonderful combination of intense honesty, erudition, humour and accessibility! In the video he mentions that he is going to be a guest curator at the Rijksmuseum in Amsterdam in 2014 and wants to make the galleries thematically approachable relating to human emotions rather than by the date of execution of an artwork. At the time I imagined this being a pretty near impossible feat as it would require some major re-hanging --  I have been to the Rijksmuseum and a small local gallery it ain't!

So it was interesting to have my attention drawn to this article in The Correspondent where the author is defending de Botton's curation of the Rijksmuseum. Apparently he did not re-hang the entire museum but had notes throughout the museum to give some direction on how to look at various paintings and how to enhance your museum experience. 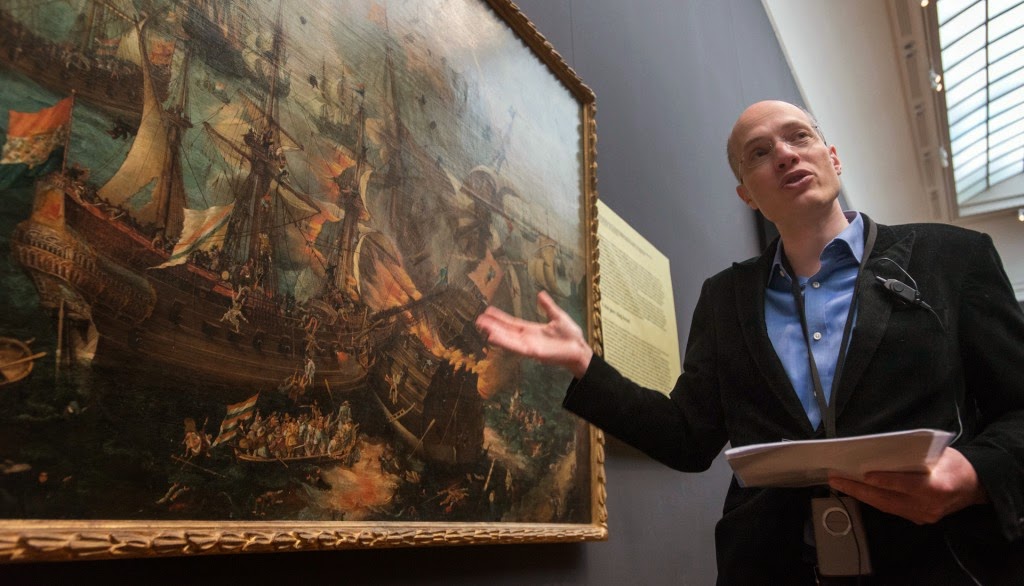 Having just finished "How to Think More About Sex", an immensely readable and enjoyable small book from the School of Life (founded by de Botton), I was delighted to read about de Botton's insights into the Rijksmuseum, as sadly I don't think it is on the cards for me to get to see the museum again in person any time soon.

Posted by Lorraine Whelan at 14:30 No comments:

Email ThisBlogThis!Share to TwitterShare to FacebookShare to Pinterest
Labels: Alain de Botton, Art as Therapy, Brainpickings, culture, How to Think More About Sex, Rijksmuseum, School of Life, The Correspondent

The topic of street art is a huge one that interests me. I love being surprised by street art -- such as images of Space Invaders, colourful and pixellated as tiles affixed on building walls in both Bray and Barcelona, or plaster heads peering at me disapprovingly as I make my way home from the Harbour Bar in Bray! [This series, "Lose the Heid" was created by Bray-based Scots artist Gibb.]  I recently read an illuminating article in Brainpickings on Shepard Fairley, the street artist/graphic designer, known for his Obama "hope" posters. Fairey's "Obey" campaign is fascinating and he talks about it in this very short YouTube film directed by Brett Novak.


In Toronto in the 80s there was a street artist who bolted lacquered and painted books to public places (lamp posts, chain link fences around parking lots, etc.). I lived in the downtown area and was always happy and amazed to come across these pieces unexpectedly. The works were definitely site-specific with the image content subversively appropriate to their location. Unfortunately it never occurred to me to take photographs at the time. I do remember though that the pieces were noticed by the powers-that-be in the city; since property would be destroyed by cutting the bolts to remove the books, the decision was made to send a worker out to paint all the artworks white...At least one was missed near where I lived on Queen St. West, as it was bolted near ground level, and could only be noticed if, say, you were crawling home along the pavement (not that strange an idea at Queen & Bathurst in 1988). 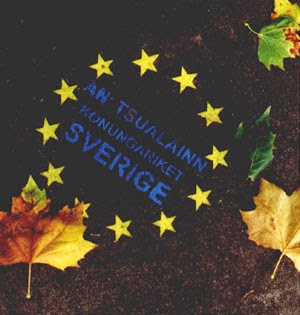 In 1997 I took part in the Ireland & Europe exhibition/symposium hosted by the Sculptors Society of Ireland. I created a series of stencils which included the stars from the European flag and the name of each member country of the EU printed in both its own language and in Irish. The irony of being "allowed" to create graffiti on the streets of central Dublin (around Parnell Square) was not lost on me! I enjoyed the performative quality of the piece too, as I created the graffiti in broad daylight and spoke to anyone who stopped to enquire as to what I thought I was doing! 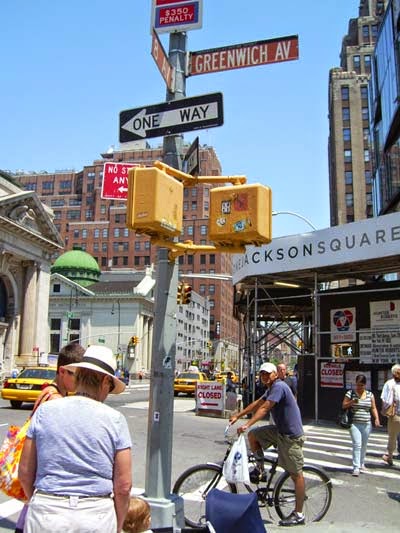 From 2009 to 2012 I (and various friends & members of family) engaged in the stickering project Placement© in which small stickers with images of my artistic oeuvre were surreptitiously placed at locations around the world. Cities such as New York, London, Toronto, Chicago, and Prague got their fair share of Placement© stickers. 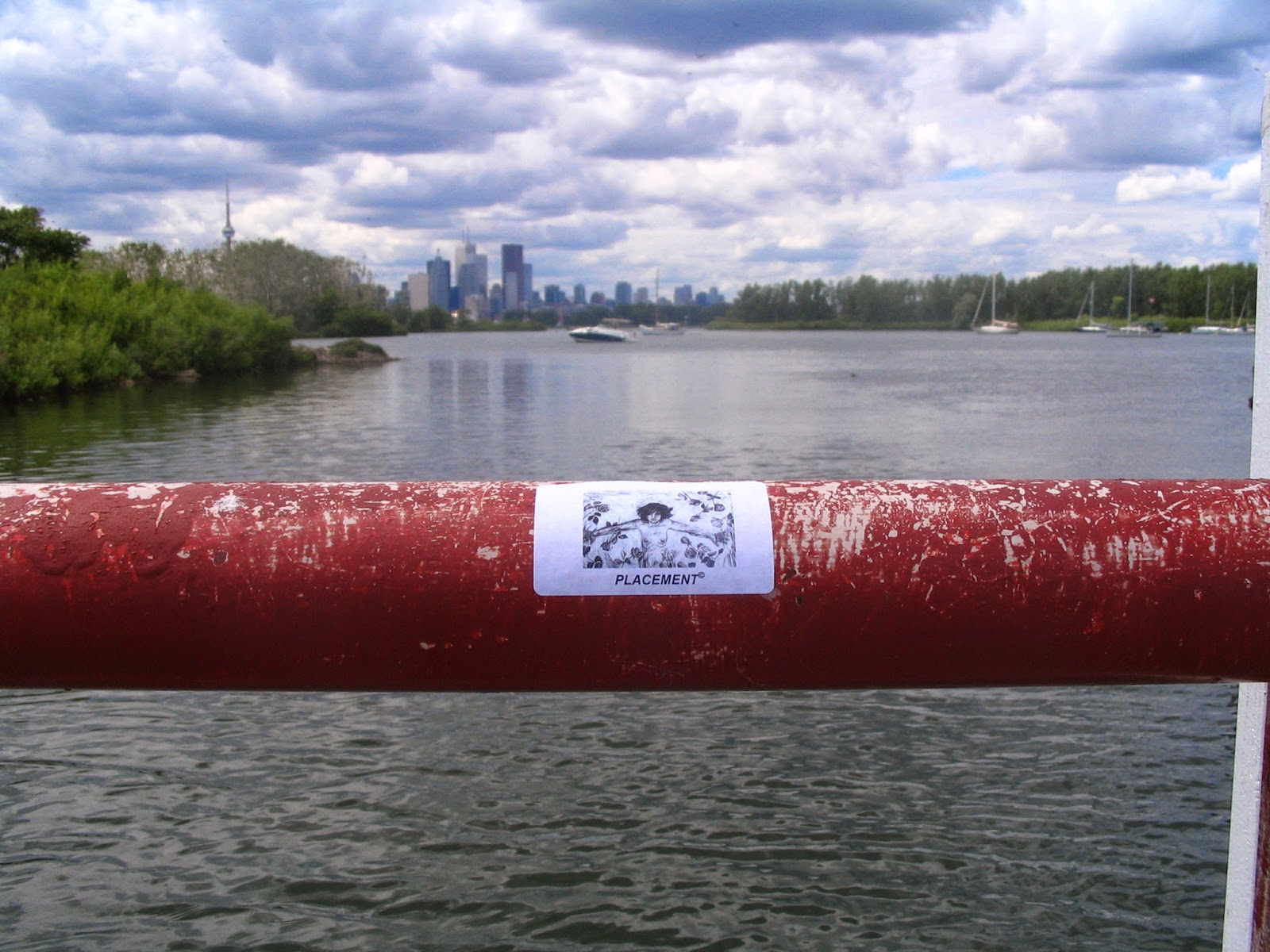 But other locations included a ski chair lift in Lake Tahoe, USA 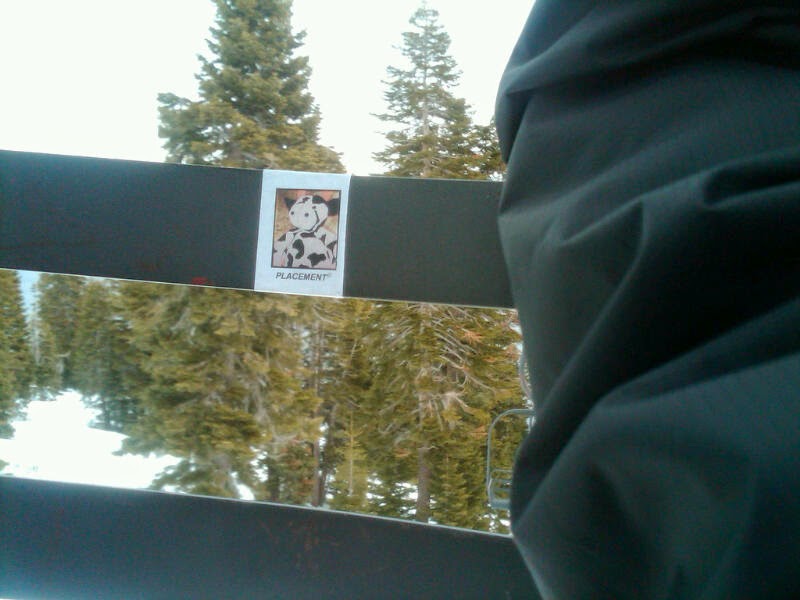 and overlooking the Mediterranean Sea at Antibes, France. 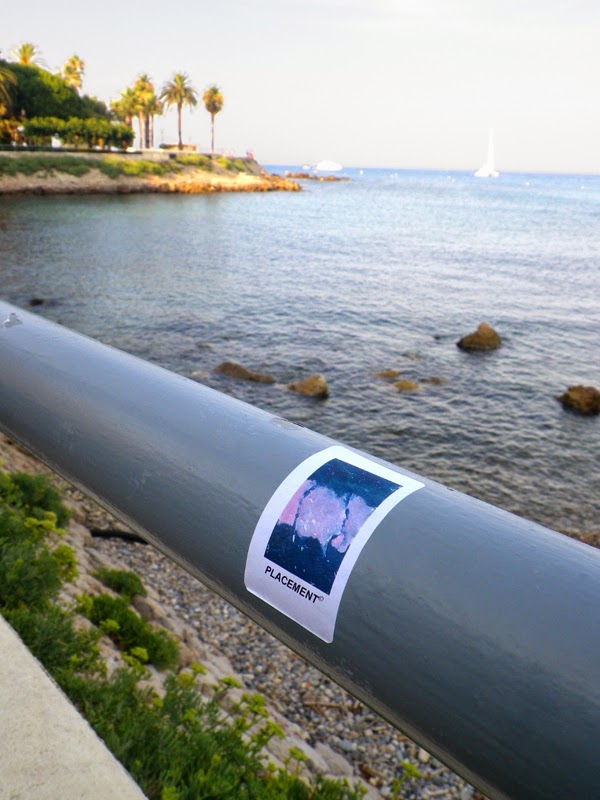 Quite a few placements were also made in smaller towns and rural areas of Ireland as well as unusual places on airplanes! For more information on Placement© look here.
Posted by Lorraine Whelan at 14:17 No comments:

I have had tendonitis since May, so I have not been able to work on my crochet for awhile now. I am chomping at the bit to get back to it! I estimate that I have at most only one fifth of the African flowers that I need to make the big blanket that I want. Here is the jumble that I am working with: 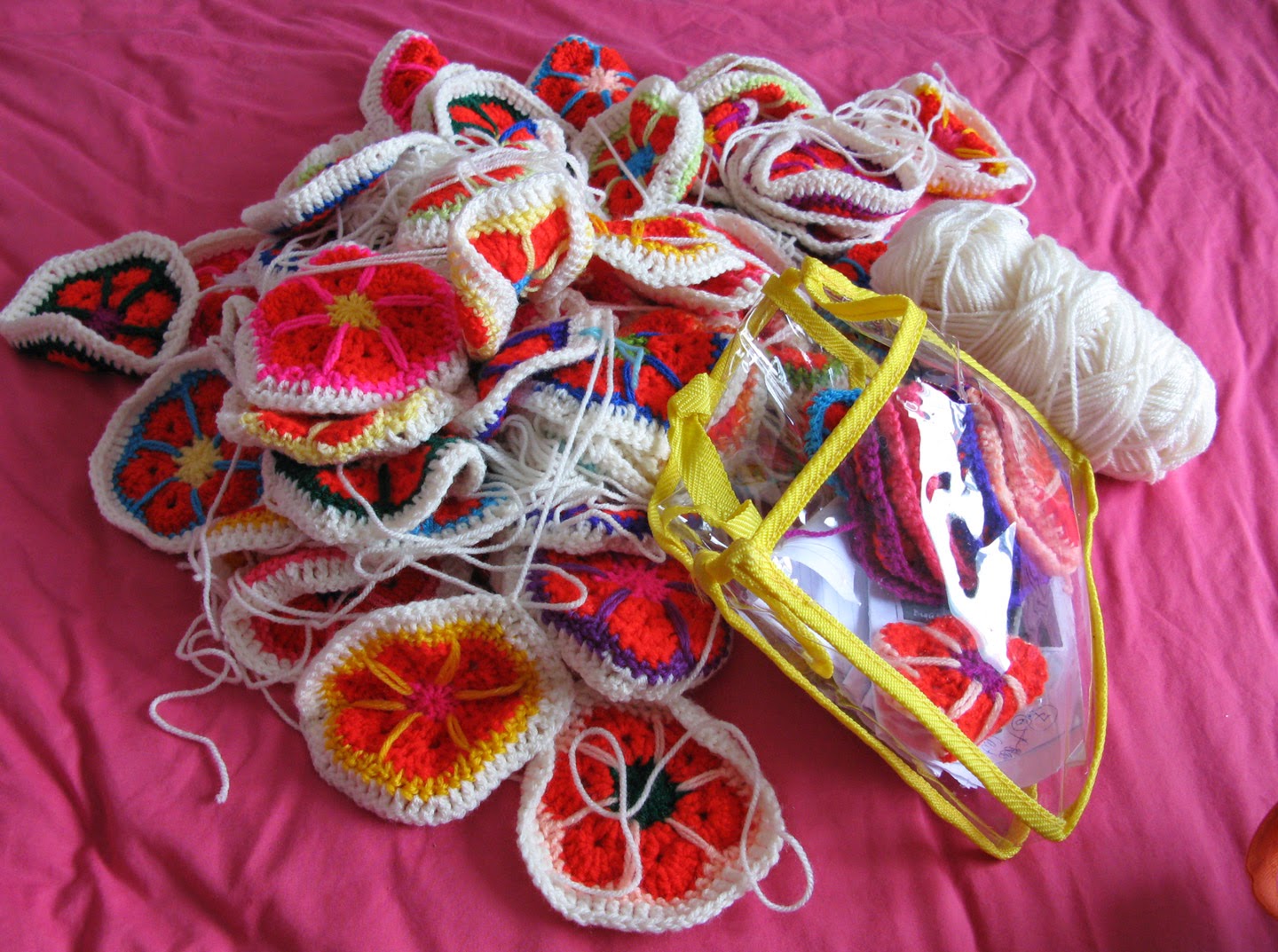 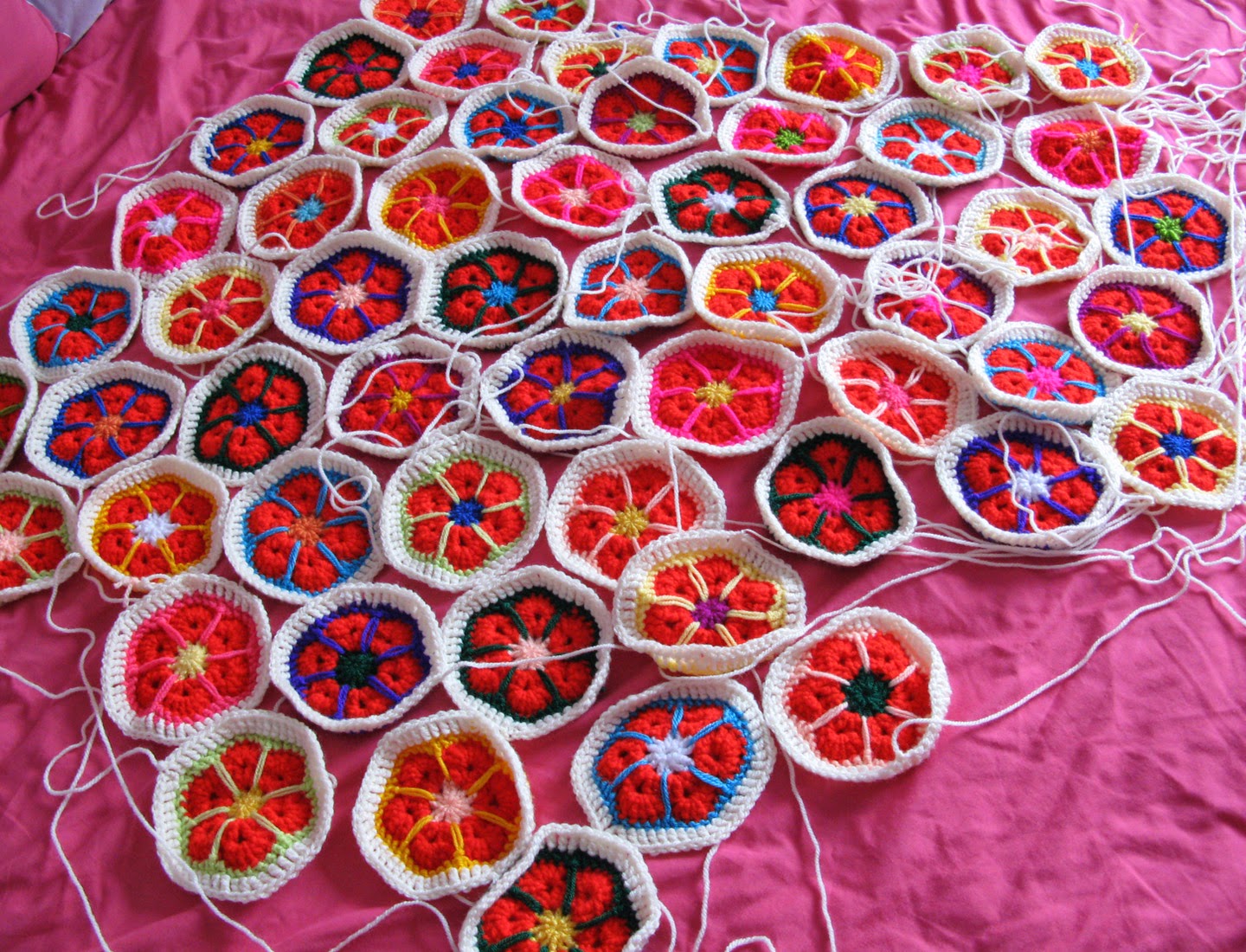 I took another photo with the flash to see if it would show the colours better. You get an idea of the foreground flowers anyway. My design is to have random and non-repeating colours on two of the layers but the petals are always red and the outline is always cream. 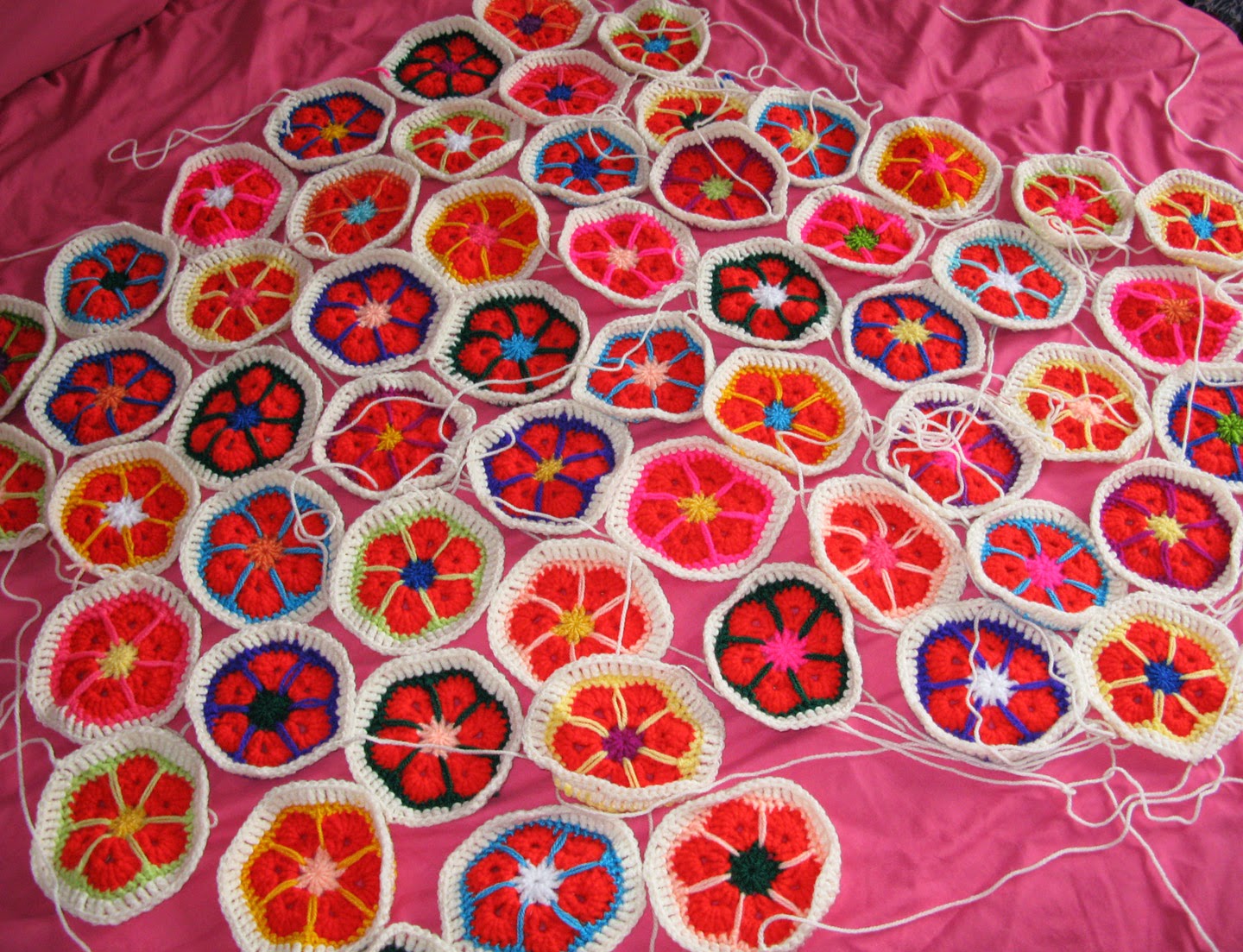 They are going to be crocheted together so that there is a small ridge where they join. I like this look. Hopefully I will get to work on it soon! I have to start joining and continue making more flowers. In the meantime, my great niece's birthday is coming up soon, so I have to finish her bag - just the drawstring and the pompoms to complete. 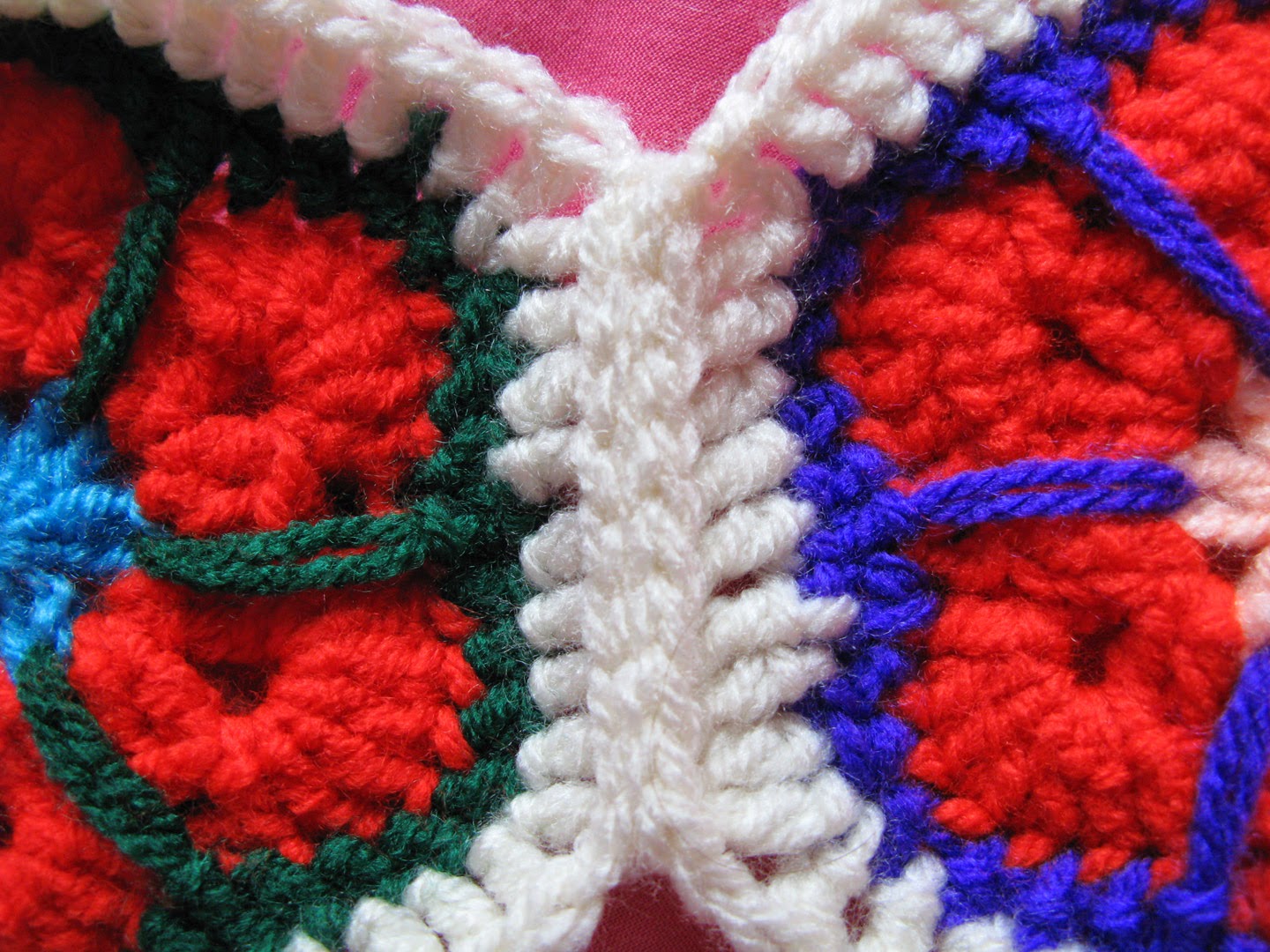 Posted by Lorraine Whelan at 11:50 No comments: