The final painting that I wanted to do for the Memory Is My Homeland series had to do with the first house that I rented (with my then boyfriend, now husband) in Kerry after returning to Ireland in the early 1990s. As I have been creating this body of work for the better part of three years, simply search within this blog to see other paintings, prints and drawings that are part of this series, most of which will be shown next spring at Rathfarnham Castle in an exhibition of that name. Before I had decided on the final title of the series, I was referring to it as The Home Project.

We had ended our European travels in the spring of 1992 in Ireland, and had gone down to Kells Bay in Kerry to visit a Dublin friend who had moved there. On returning to Ireland this friend (easily) convinced us to move to this beautiful village and even found us a place to live, beside this bridge whose name gave itself to the house we lived in, as a postal address.

As with most of my work, I have a very clear idea of what my image will be before I put any media down. The green and blue blurs of paint denote to me the background of sky and hill; I have sketched out the bridge itself with a yellow line. 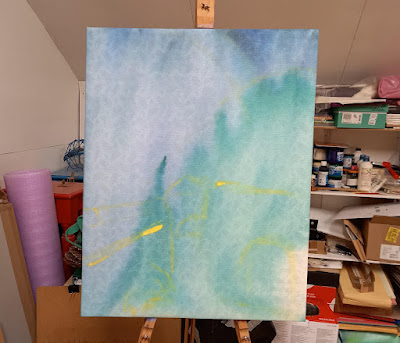 Even at an early stage in the painting, I am giving a clear indication of the end product, though there is also always the uncertainty of how paint is going to play out on the pressed cloth. I enjoy this level of unpredictability in my painting, most especially a factor when using a ground that is not canvas. 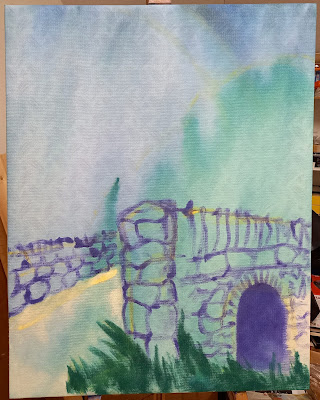 The stone bridge harks back to my series of paintings from the '80s and '90s, My Tower of Strength, which built on my obession with stone ruins of windows. Interested in the architectural structure of a window (usually from monastic sites) I proceed to paint bricks with magical colour - purples, blues, pinks and yellows. I think with the bridge I have been a bit more conservative, but then again... 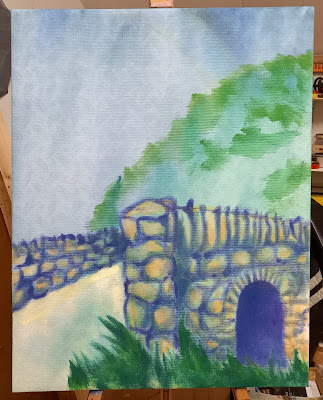 While I wanted the trees on the background hill to remain elusive, I wanted them also to be a more definitive blur. I have seen some pretty magnificent rainbows in this land and there is something about them that will forever be magical to me, despite their role as a cliché. 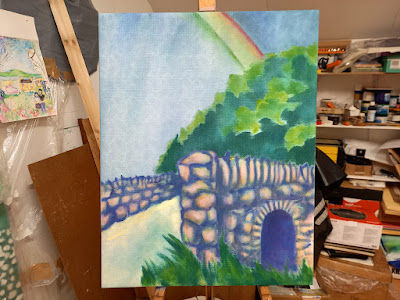 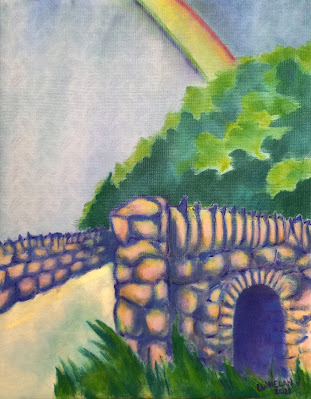 Posted by Lorraine Whelan at 06:50