I gave a general overview of this year's RHA Annual Exhibition in my post here, but I also wanted to post a few pix of works that stood out for me among the plethora of excellent artworks.

Although the first gallery room seemed chock-a-block with work, the hanging seemed very thoughtful as works definitely were in some sort of conversation and subtle echoes of each other. One of my friends who was viewing the exhibition on a repeat basis noted that visitors spent more time in this first room, before they really realised how huge the exhibition actually was. I tried to hurry my pace. In one corner I noted a large drawing, a self-portrait, by Imogen Stewart, a grand dame of the Irish art world. She is a notable sculptor and, indeed, the drawing was very sculptural in form. One of her sculptures is in the foreground of this picture. Also in the corner was a drawing and some sculpture by Danny Osborne. I had some familiarity with his fascinating work in lava casting because he had been on an Umha Aois project with my husband a few years ago. 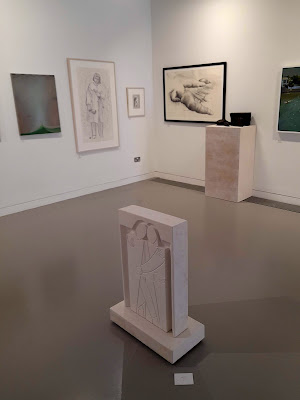 My foray to the RHA was brought about by the desire to see Judy Foley's new work in the flesh. Through the delicacy and clarity of her images of body implants, she subverts traditional icon painting techniques (egg tempera and gold leaf triptych) to boldly make statements of the fragility of humanity versus godliness. I have followed Foley's work for a number of years and have previously written about it for CIRCA online magazine here. 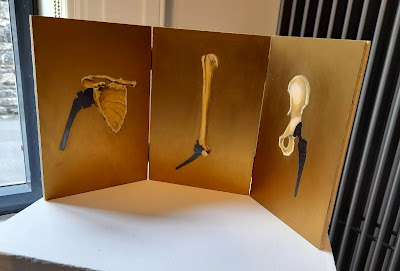 After being introduced to Myra Jagos work at the recent "Show and Tell" at Signal Arts Centre, I was looking forward to seeing her painting in the flesh too. I wrote about the Signal event in a previous blog, here. 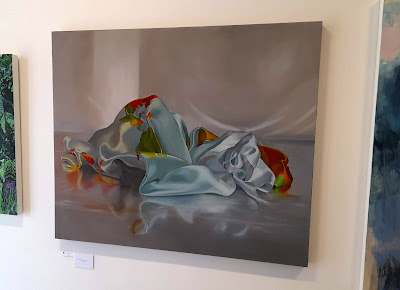 In one of the large rooms upstairs, there was a whole wall full of small prints. It was here that the tiny self-portrait etching of Daniel Lipstein leapt off the wall to my eyes in recognition. I had met Lipstein a number of years ago when he was giving open printmaking workshops at Trinity Arts Workshop. Not only was this pre-pandemic, but it was pre-policy change - shortly after Lipstein demystified carborundum printing for me (I had never heard of this process till I came to Ireland!), TAW decided that their workshops would no longer be open (albeit paying) to anyone who was not affiliated in some way to Trinity College. Since I am not, I could no longer attend the workshops. Boo, hiss, on Trinity Art Workshop! 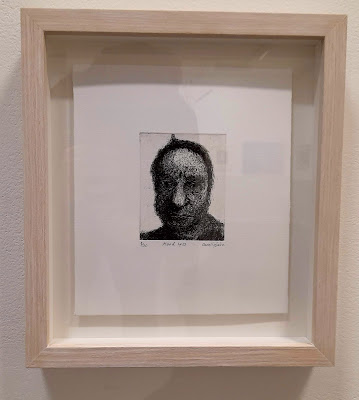 I noticed this larger woodblock print and recognised the work of Kate MacDonagh, who gave an artist talk via Zoom last year, hosted by Graphic Studio Dublin. I had also virtually attended MacDonagh's artist talk on the mokuhanga technique (Japanese traditional woodblock printing) of which she is a virtuoso, through the Dún Laoghaire-Rathdown arts office. 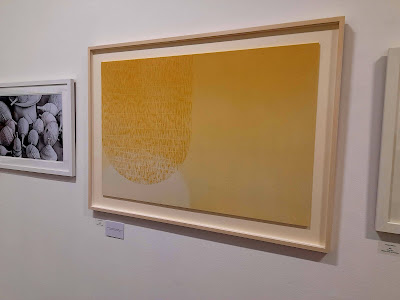 Susan Early is also associated with Graphic Studio Dublin. She is the education outreach administrator there (from whom I get loads of e-information on artist talks and courses) and also a printmaker. I was unable to attend her recent Zoom artist talk (thank you GSD for holding these talks throughout the lockdowns and continuing them into the foreseeable future!) but look forward to seeing the recording when it is available. GSD has a YouTube page so previous artist talks can accessed here. 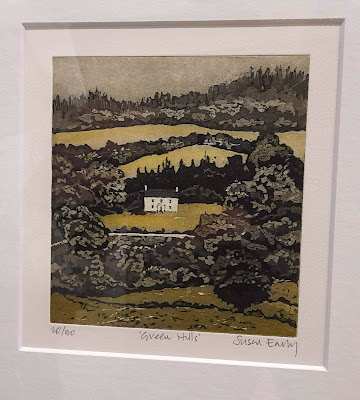 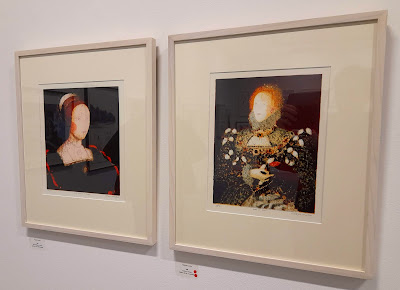 Ailbhe Barrett (though this print stood out anyway to me, for its ethereal atmosphere). 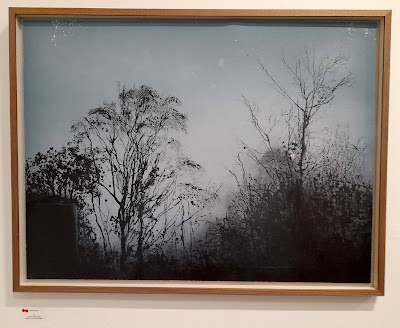 Speaking of ethereal atmosphere, I loved this intimate painting by Anne Magill. 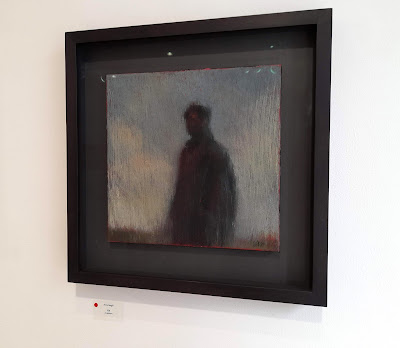 I thought, when I first saw them on the wall, that this tiny work and a companion piece by the same artist, Bernadette Madden, were colourful, miniature paintings but then realised that with all the sold red dots beside them, they were in fact prints - silkscreen. Gorgeous! it is really inspiring to see so much fantastic work by fantastic artists - my blog is just touching the tip of the iceberg, and in any case a quick pic taken with a phone is nothing compared to the live experience of seeing the actual work. I have my gripes against the RHA, but I can't fault the work being shown there. 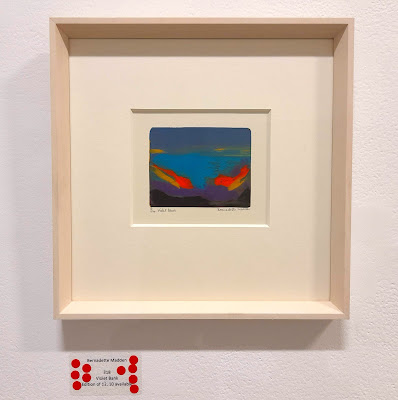 Posted by Lorraine Whelan at 07:17