This is a very tiny gift sculpture I made for my boyfriend (now my husband) when we were separated by an ocean in 1988. It is based on a sculpture I made in a dream I had around that time. The chairs are moveable. I also think the dream itself was inspired by my mentor at university, sculptor Hugh LeRoy, who I had taken drawing classes with and also asked him to mentor me in independent studies in painting for my final two years in university. Before I had ever met him, I read a review in ArtsCanada about a sculpture he had made featuring an "order" chair and a "chaos" chair. Hugh was also profoundly interested in dream-induced creativity and introduced me to left-handed drawing as a useful method to encourage freedom in drawing.

In 1995 I was living in Kerry and amazed by all the calla lily plants on rural home lawns. But when I dreamed about them they were brightly coloured instead of white. I made a Father's Day card for my Dad that June, with an image of the dream calla lilies. My Dad died a few months later, and I created the piece "Dreaming for Dad" on 2 large net curtains and the companion small icon diptych. When I exhibited them the following year with other works, "Pastures Green", at The Basement Gallery in Dundalk (now called An Táin Arts Centre) I installed them in a separate room so that a life-death passage was clearly represented. I loved the way the lighting reflected muted images of lilies on the walls. 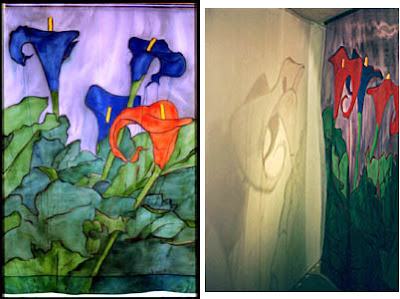 While at a studio residency in the spring of 1989, I enjoyed playing with my dream imagery to create a temporary installation in my studio space at The Tyrone Guthre Centre at Annaghmakerrig. Another painter friend referred to my studio of cut-outs as "The Playroom". 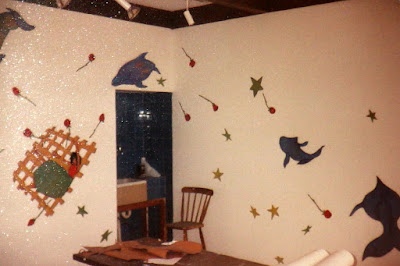 I had been granted the residency to finish work for my first solo show in Dublin, but I only had to complete one large drawing for the exhibition and then I was free to let myself go. I enjoyed drawing images with pastel, cutting them out and affixing them to every wall in the studio. 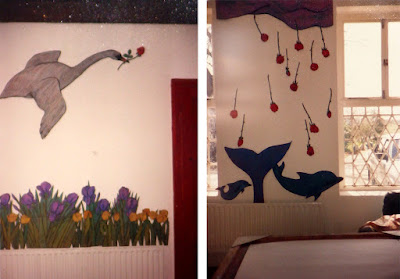 I know I created this piece sometime after the mid-1980s, based on a dream where I was surrounded by water (but remained dry, kind of like the parting of the red sea in CB DeMille's "Ten Commandments" film) and saw a red-sailed boat in the distance. This is a large (about a metre squared I think) painting/collage on Strathmore watercolour paper - a roll of which was given to me by Hugh LeRoy because he was fed up seeing me disrespect my own work by using newsprint for all my best drawings...I know this work still exists, and is beautifully framed, because it was bought in the '80s by a colleague who is now a very dear friend. 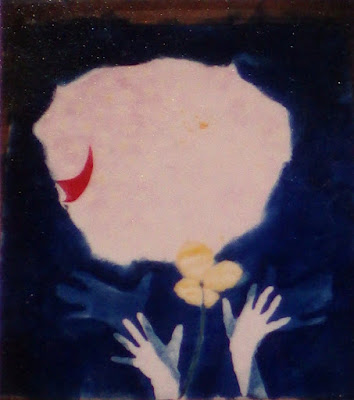 This is another piece, also painted on Strathmore paper (from a huge roll) around the same time as the one above, a variation on the same dream theme. However, I am pretty sure this work no longer exists, other than in my mind. 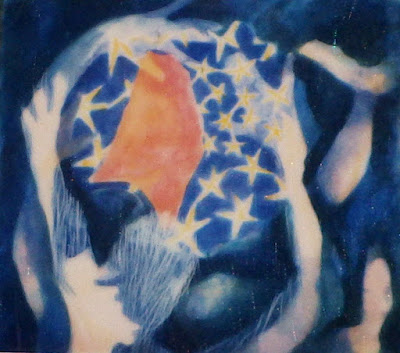 In my last year of university, 1986, I participated in a group show at the Winters college gallery (at York University in Toronto) and with some other work, presented these large paintings (each panel of the triptych and diptych is 4 ft x 3 ft) based on the red-sailed boat dream theme. Both of these paintings no longer exist, having fallen prey to one of my "Great Purges", a necessity when moving back and forth across continents. 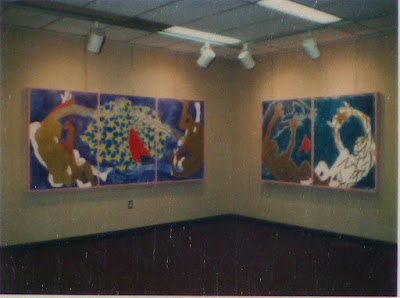 These dream sketches managed to survive, having been recently discovered in my "Grey Box" archive. I know the drawing on the left is created on blotting paper (a nice blurry water effect) and the sketch on the right was created while on holiday in Ireland in 1984, presumably depicting a dream I had during that holiday. 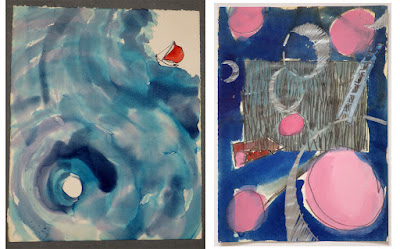 Posted by Lorraine Whelan at 17:45