I started writing about the Aos Dara/Umha Aois combined symposium, in which I was a participant, last week. Details of the symposium and my preparations for work can be found in that blog here. As I had the paper prepared with graphite already, I began drawing with my trusty Staedtler eraser, as per my proposal. I was glad to have some green graphite, because after being in Tomnafinnoge wood, I did not want to limit myself to dark, grey works. However, I was  very pleased with this drawing and the subtlety of the green graphite on the tree worked. I did several other drawings on graphite, which I was not happy with, so of course, I am not showing them! (They'll be binned soon enough.) 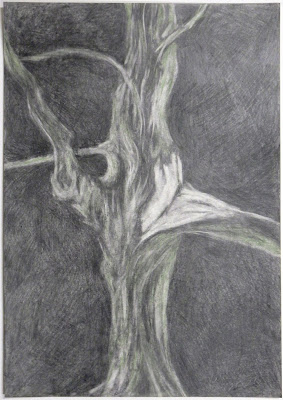 My original intention, when preparing several sheets of paper with black acrylic, was to paint images in white only. However, as I mentioned last week, the colour of the forest so impressed me that I didn't think such a minimalist approach would work. I really liked that image of the lightning tree and got out my oilsticks to do more justice to the colourful tree. 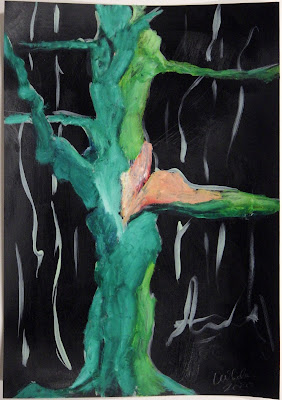 When I make collages I tend to tear the paper into shape rather than cut. This facilitates a certain amount of unexpected results in the intended shapes as well a beautiful deckled edge, showing off the original colour of the paper (in this case, a creamy white). 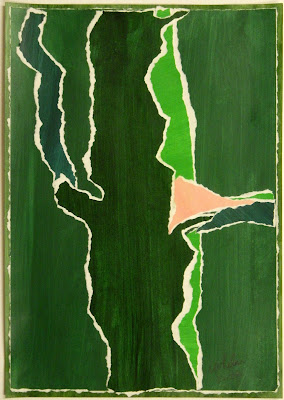 Another image that I repeatedly used as inspiration, was that of the small mushrooms which could be seen in networks growing from mossy, fallen tree limbs, and I even spotted a circular Faerie Ring of small mushrooms. While I definitely did not think my graphite, and black & white acrylic drawing experiments with mushrooms actually worked, the jury is still out on the collage. 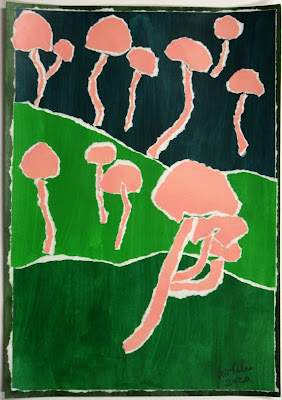 The acrylic collage that I thought worked best was Saplings. I had experimented with this image several times in other media, with always problematic results, yet I kept on working on it as I really liked the image of trees and ferns that could be seen at one of the forest entrances. 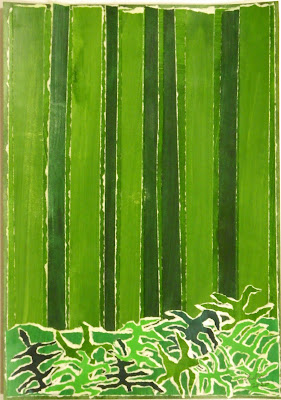 I was guaranteed that one piece would be displayed in the group exhibition, but I chose two to frame as I couldn't decide whether I preferred the sombre Lightning Tree or 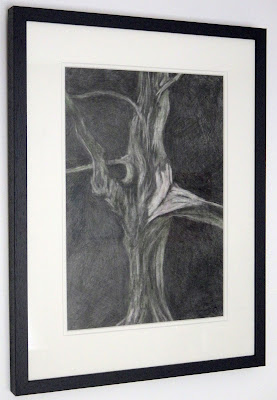 the colourful Saplings. I brought both of them to the gallery and said they could choose either. Happily both pieces will be in the group exhibition that launches on Culture Night 2020. 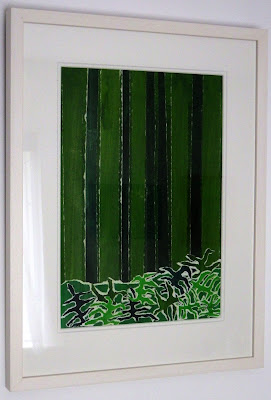 Posted by Lorraine Whelan at 10:55