I have taken part in the annual fundraiser for the Jack and Jill Children's Foundation for quite a number of years now. I first got involved with the charity when they hosted The Big Egg Hunt Dublin, where artists were given a giant egg to paint. The eggs were then displayed in various locations around Dublin around Easter time and later sold off at auction to raise funds for this very worthy cause. Mine was displayed outside the beautiful Chester Beatty Library and later sold to IBM Legal Services. I have previously blogged about that particular event here, here and here.

Although the following year there was a similar event with painted pigs (in which I did not take part), the subsequent fundraisers took the form of "incognito" events, which were both more straightforward and very successful. The premise was simple: artists were given three cards on which to make artwork, the artist would only sign works on the back, all cards cost the same price regardless of who the artist was, all proceeds would go to Jack and Jill CF. Last year, due to Covid19 the sale of work was completely online, widening the audience over the internet. There were two sale dates (as there was supposed to be an exhibition in Cork as well as Dublin) and both sold out within hours of becoming available. This year the sale is again going to be online and further details can be had here. 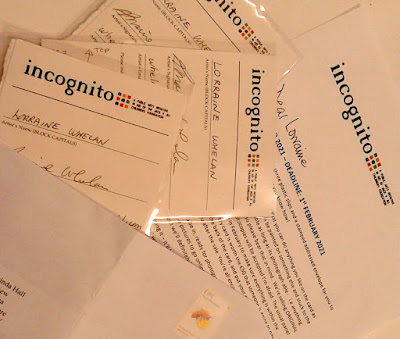 Posted by Lorraine Whelan at 10:41