Eamon Colman "Into the Mountain"

A week ago I trekked (via car) to Thurles in Tipperary to The Source Arts Centre in order to see Eamon Colman's exhibition of recent work, Into the Mountain. The Source is nicely situated in the middle of town next to the river. I don't know how all those clouds made it into the picture, I thought it was a sunny autumn day... 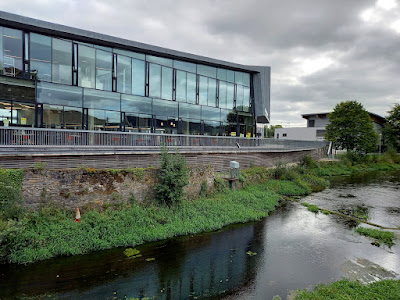 Colman's work references poet/nature writer Nan Shepherd's paean to the mountains of Scotland, The Living Mountain: A Celebration of the Cairngorm Mountains of Scotland. The importance of Shepherd's belief in wandering and understanding the landscape, rather than just reaching a summit, is reflected in Colman's work by his use of colour, line, and the multi layering visible (and hidden too!) in both paper and paint. Colman has his own mountains to explore here in Ireland: he lives rurally and Slieve na Mban is visible from near his home. All of the works make some reference to both his explorations of nature and to his personal explorations. The large collage on the first wall is inviting as well as sublime: Into the Mountain gives an overview of the exhibition and each work thereafter allows the viewer a further chance to explore. 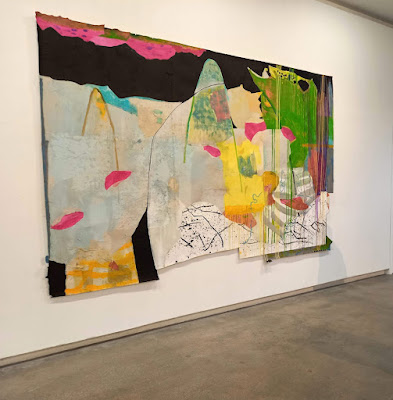 To breathe with birds is the only work that has a wall to itself (the second wall), which commands especial focus. This piece stands out for me through its rich, abstract musicality. As well as the birdsong implied by the title, my imagination takes the black and white oblongs as keys on a piano, and the yellow as a swaying, dancing skirt or bellows. I do not force structural images to be read in this way, but they are welcome to participate in my understanding of the painting. Bellows, of course, are full of breath, so again the title has directed me. 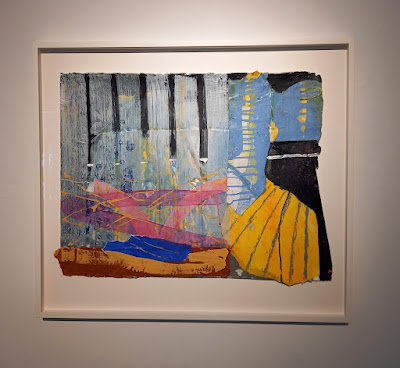 The third and fourth walls had grids of works that seemed to be in conversation with each other and with the several pieces not included in the grid, but on the same wall. (The picture below is from the fourth wall.) 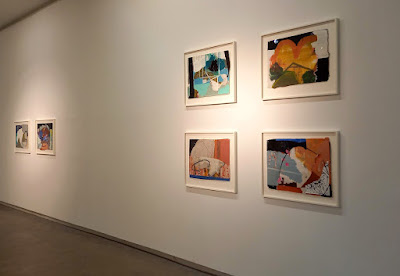 The upper left piece in the picture below (from the third wall), put me pleasantly in mind of one of my favourite works in the Picasso Museum in Antibes, Nicolas de Stael's Le Concert (I've blogged about de Stael previously, here and here). The shape reminded me of a piano, and then, indeed Colman told me a story about finding a piano in the woods... 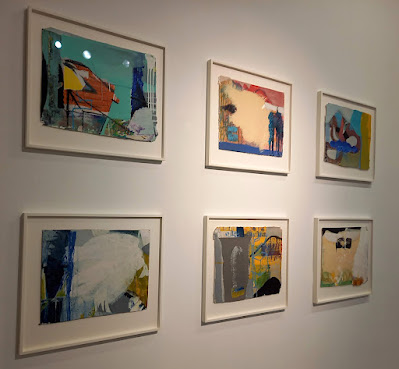 This is a view of the same grid from a different direction. Although any photo does not do justice to the original work, as a painter I was drawn to the vibrancy of the colours and the sheer painterliness of the collages! 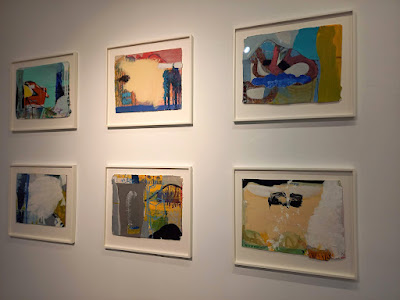 The collage form allows for additional layering, whereby juxtapositions of colour become separately defined yet retain their unity with the whole painting. 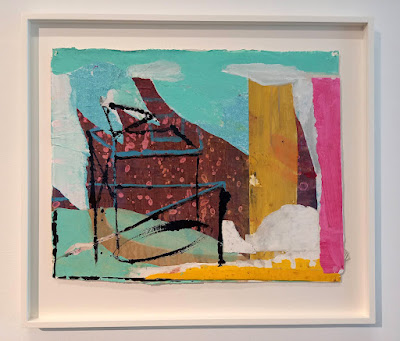 Collage allows for a certainty in the creation of a three dimensional space within an abstracted two dimensional work. 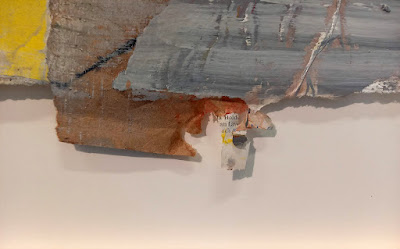 Posted by Lorraine Whelan at 11:52