I thought that the large Knockeen was going to be the last painting in this series, but then I had some ideas to do a few more, so got to work. The first of the new paintings was also going to be the largest, but considerably smaller than Knockeen and Kingswood. I decided I wanted the works to be stretched and in doing so discovered that pressed cloth is a lot more difficult to stretch than canvas! However, I do like the  unpredictability of painting on this material and think it is appropriate to the concept of memory as being sometimes blurry and unreliable, so I carried on.

I started painting, as usual, by working out the composition in yellow. I fully expect some of the yellow lines to show through in the final work and like the idea of revealing the process as I go along. 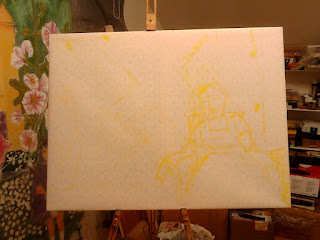 In the mid 1980s, when I lived in Toronto, I had a bachelor apartment on Kingston Rd, not far from where I grew up. Though this apt was technically in Scarborough, it was only several blocks away from Toronto, and about a 20 minute walk downhill to Lake Ontario. I was in my final years of university at the time. For an installation I was working on I painted sheer curtains, and it is those painted sheers that are hanging up in the windows (as they did) behind the figure. 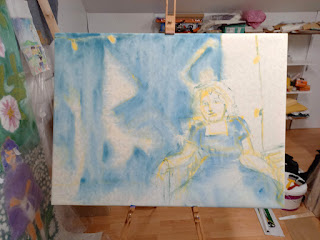 The figure is, of course, a representation of the younger me, and the red checked table-cloth over my all-purpose folding card table had to make an appearance. 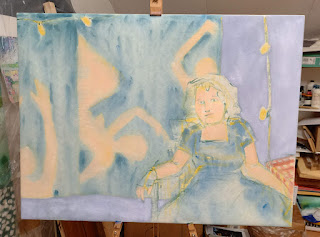 What I refer to as a "small" painting is relative, as is obvious by this working picture. That's Kingswood on the wall behind; I unrolled it and hung it over Knockeen, then covered the two with plastic sheeting so they wouldn't get spattered accidentally while I worked on the smaller easel paintings. 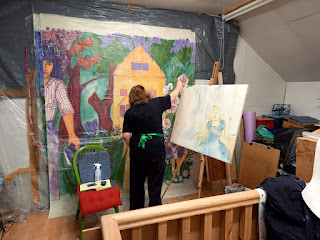 The painting in its final days. The xmas lights were a year-round thing, just as they are now in my house, though fairy lights are much smaller. 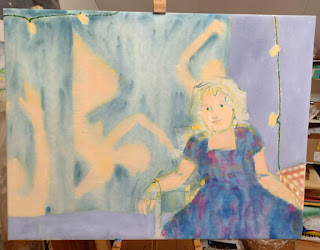 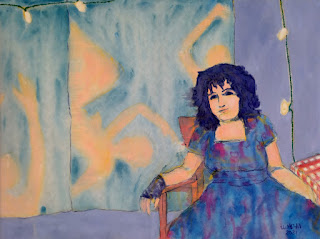 For all previous works from the Memory Is My Homeland series, please do a simple search within this blog (I have made many posts of the works in progress and completed). Also, the origins of this project may be found under the label The Home Project, as I called it when I hadn't yet decided on a name for the work.

Posted by Lorraine Whelan at 09:24