Memory Is My Homeland at Rathfarnham Castle room 3: The Dining Room

The third room of my exhibition at Rathfarnham Castle is accessed by walking across the back of The Saloon from The Pistol Loop Room and entering through the curved door. To see works related to this exhibition and in-progress, simply do a search for Memory Is My Homeland on this blog.

While it is furthest from the door that one has just entered, Kingswood is the largest piece in this room and being so colourful one tends to walk over to it first. 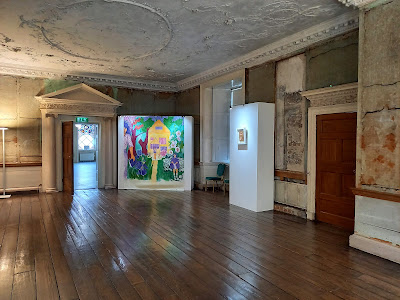 This is my representation of the house in Toronto that I grew up in, the three figures representing moments of my life: a young child stands on the front lawn by the hedge on her Communion Day, wearing the purple cape that her mother made for this occasion, a young teen reading and tanning on the steps (every summer for several years) and the young woman in her early 20s leaving home to start her life as an artist and writer. The house had much flora in the front yard, back yard and side garden. One of the lilac trees in the back yard was hit by lightning when I was a child so there was a stump that didn't flower, but the other side of the tree remained healthy. I didn't put everything in the picture but as much as I could... 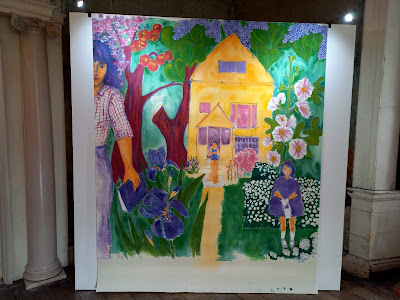 Moving away from the big picture, on a false wall of its own is Home. Although this piece is much earlier than the others (it was created in 2009) and began as part of another series of works, I thought it belonged with these works. The little icon is based on a drawing my child did, of my current home in Bray, when my child was about 6 years old. 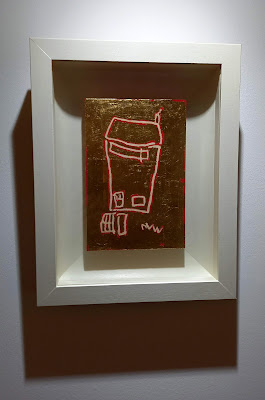 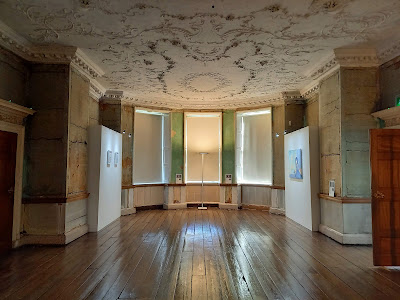 The House with the Red Door and The House with the Green Door are representations of the earliest homes of my life, in Cabbagetown, in Toronto's inner city. I actually remember a few things related to each house but mostly I differentiate them by the colour of their door. We moved from the former to the latter when I was 2 years old and my family moved from the latter when I was 4. The print Swing Chain, in the Pistol Loop Room, specifically relates to the low chain fencing separating the front lawn of The House with the Red Door from the footpath. I had remembered swinging on a chain fence as a toddler and thought this was a false and impossible memory until one day, as an adult, I passed this terrace of city housing while on the streetcar in Toronto and saw the low chain fences as they appeared in my memory! Cabbagetown got its name because in the late 1950s and early 1960s there was a huge wave of Irish immigrants who ended up living in this area (my parents and siblings among them). 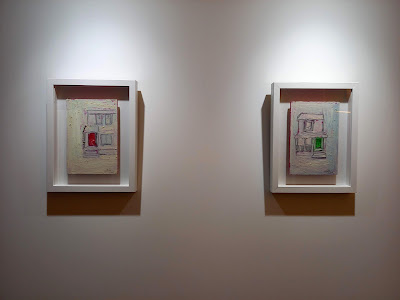 The final piece in the show, Kingston Road: Waiting, is a representation of me in my twenties at my bachelor apartment in the upper beaches area of Toronto (West Scarborough), where I lived for several years. The curtains behind me are actual sheers that I had painted for an installation about HOME that I worked on while completing on my BFA at York University. I was, of course, waiting for my career and life to really begin. A few years after finishing uni, I moved to Ireland, where I had my first solo exhibition in Dublin at Temple Bar Gallery & Studios in the spring of 1989. 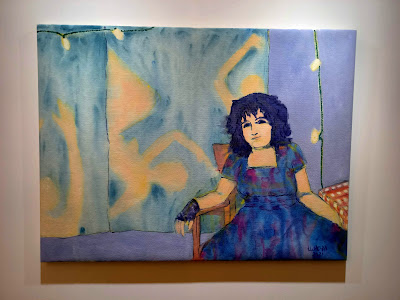 Posted by Lorraine Whelan at 09:19