I previously blogged about the Introduction to Printing on Textiles course that I did a few weeks ago here. This is the second part of that account of my adventures at NCAD. I was thinking about French painter, Henri Rousseau, when I was figuring out imagery for my linen napkins. Here is one of his most famous paintings, The Dream. 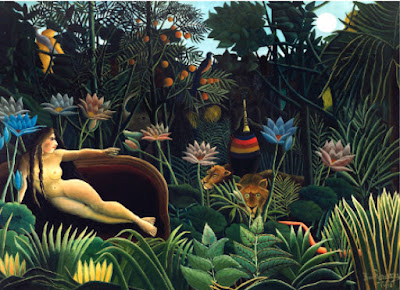 After seeing the heat press demonstrations with foliage, I had an idea that I wanted the linen napkins to have a lush foliage design and I kept thinking of Rousseau's work. Here is another of his paintings showing what was in my mind. 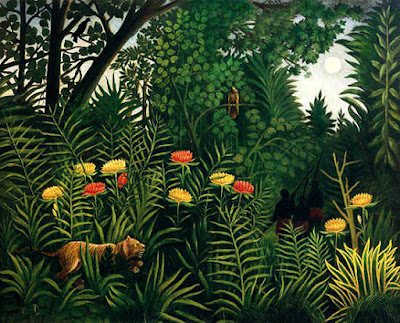 I started out thinking that I wanted an overall background colour of green, so painted a sheet of newsprint (with the special ink for the heat press) that was roughly the same size as the napkins. 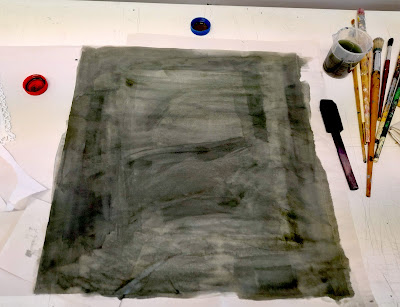 I used the negatives from the Yupo paper to block out the wild rose, and various bits of foliage to block out areas that I did not want the overall colour to go on. The Yupo paper, which is synthetic, melted in the heat press! But I decided it was an unnecessary precaution anyway as the fuschi screenprint of the wild rose was a stronger colour than anything to overlay it. I also decided that I didn't really like the white foliage areas, even if I did like the foliage shapes. 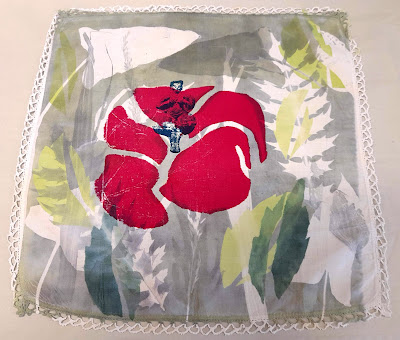 So I painted some other greens on newsprint and ripped pieces to make a sort of collage of colour, including cut-out leaf shapes and real foliage. 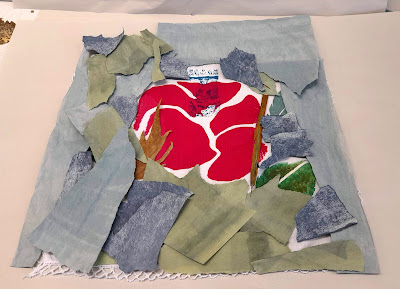 This random collage and colour was more satisfactory to my sensibility and my plans were then to just keep layering as I went along. 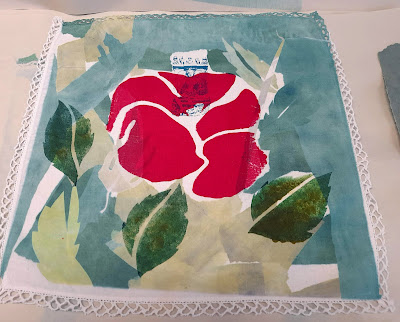 The class was a small group, so by time my collage layer was ready, the heat-press was free and it was my turn to do another sixty second countdown. 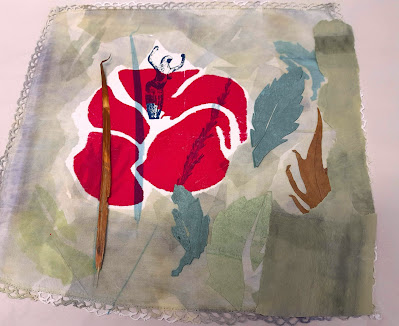 Up until it was time to clean up on the last day, I was working on my layers. I photographed the finished napkins on a bench outside the work room and the sun was absolutely streaming through the huge windows. 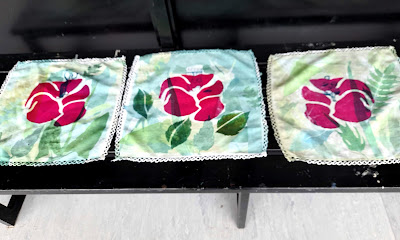 These pictures give some sense of the finished napkins. The colour seems fairly correct on the wild rose, but the individuality of all the foliage is easier to discern in real life. 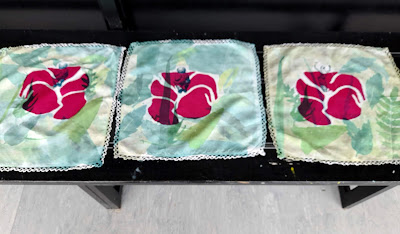 As well as Rousseau for the foliage, I think I was also channeling Botticelli's Birth of Venus by having the silkscreened goddesses emerge from the wild rose. It was an intense, productive and fun week learning this process! 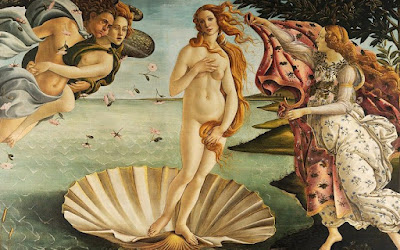 Posted by Lorraine Whelan at 15:01