archive from the rooftop!

A few weeks ago I remembered having done a drawing of Macha running with horses (something she was forced to do while pregnant and so cursed the men of Ulster to be severely debilitated in time of greatest need) when I lived in Kerry. I was sure the drawing must be in one of the portfolio or flat storage boxes that have been relegated to the attic roof for the past few decades. I was determined to, at the very least, do an inventory of the work in these portfolios while looking for the drawing and perhaps purge a few things on the way. First up was a flat box portfolio that I recall being made to house a submission of drawings to Canada's Artbank in the early 1990s, prior to my big move to Ireland. 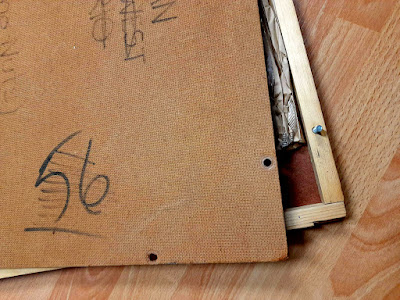 My work wasn't bought (I don't even remember what I submitted) but the durable portfolio has proved itself very useful for unframed work. 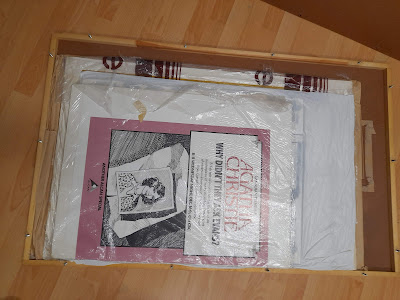 The work inside was a nice surprise too and I began an inventory. Photographs and measurements were taken of all works, and then I began separating work into piles to keep or to purge. 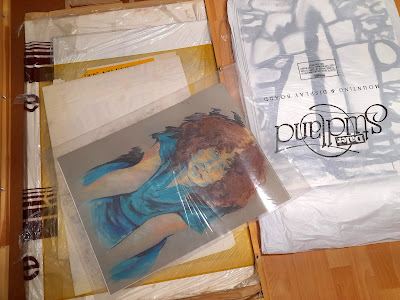 I'm glad I kept the two self-portraits from the early 1980s and they went into the pile to still keep. 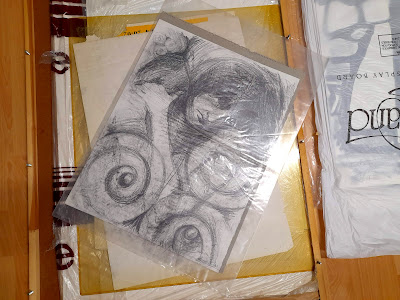 When I worked in the Records, Archives & Museum Dept. of the Toronto Board of Education, a clean-up/clear-out of perceived junk was being done. I was offered a huge, double-handled porfolio and gladly took it off the TBE's hands! All kinds of things were inside it that I didn't expect to see. I had been searching for years (in the wrong places, obviously!) for my copy of a Day in the LIFE of a Bull Dyke magazine by Canadian artists Shawna Dempsey and Lorri Millan. There was a photocopy of a memorial to my Dad that appeared in The Bray People in 1995. There was a large, handmade calendar page from my busy final month in Toronto in 1993 giving a daily account of my doings (packing, garage sales, meetings with friends, gigs, literary readings. I was also surprised to see some fine drawings that I did for a Community Employment Scheme in which I participated in 1990: my task was to create drawings of historic sites and sites of interest around Wicklow for possible use in tourist walks brochures. The brochures were never made, so nothing came of it, but it was nice to see these illustrations again. 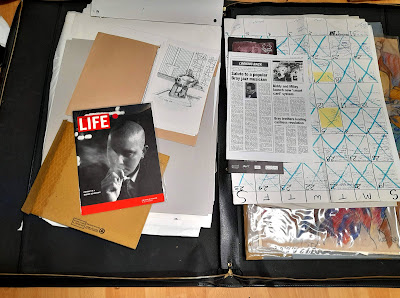 That large portfolio also contained art postcards and invitations from friends' exhibitions that were mounted in acetate so that I could hang them on the walls of my apt for inspiration. The relevance of some of the press clippings I found wasn't apparent to me - I guess I liked the pictures! There were also some experiments with media for specific projects; these items I know can be discarded once I have pictures and measurements. 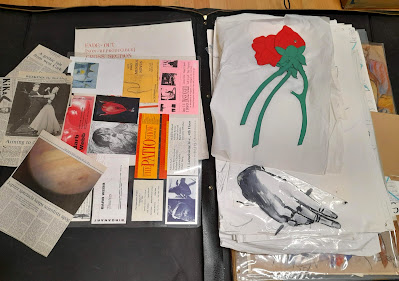 In another portfolio there were smaller bodies of work, idea sketches and work belonging to my husband. 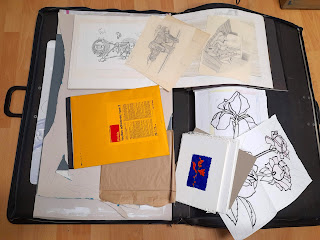 It was interesting to see some of this work again, much of which I had entirely forgotten about. I never found the Macha drawing, but at least I have organised the works that I am keeping. I only returned TWO portfolios to the roof for storage! 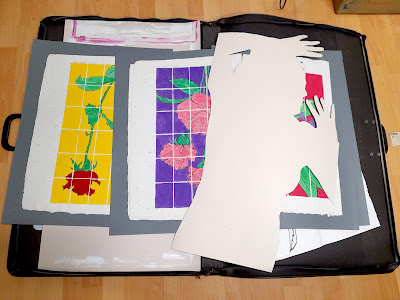 There was also a large rectangular box that contained unwieldy plates of glass and some oversize pictures. The last portfolio I went through was a makeshift wooden portfolio that I was sure hadn't been opened since the late 1980s. So I cut the tape! I was wrong, there were some things from the early 1990s, mostly life drawings from various sessions -- all of which have been purged (again, after they were photographed and measured). After nearly four decades as a professional artist, I finally don't feel that I have to prove I am able to draw! Of more interest to me in this portfolio were several posters - one from the play Boss Grady's Boys by Sebastian Barry and another of an exhibition of paintings in Dublin, Local Colour by Pat Moran (RIP). I had met both Sebastian and Pat at The Tyrone Guthrie Centre in the spring of 1989. Pat gave me the poster from his exhibition the previous year and I attended the premiere of Sebastian's play at The Peacock Theatre in Dublin that summer. 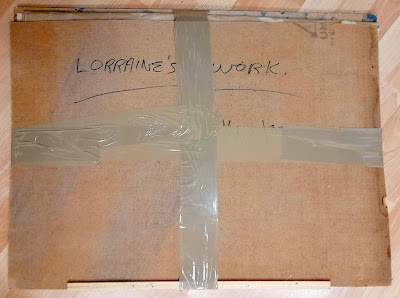 Posted by Lorraine Whelan at 10:15