I had bought a 2-day/2 venue ticket in advance of going to Venice, and the first day was spent at the Giardini venue (see here and here for my blog reactions to this!) and the second day was allocated to the Arsenale. As with the Giardini, there was a mix of national pavilions and individual artists as part of Ralph Rugoff's curated exhibition, May You Live in Interesting Times. According to Rugoff's fascinating catalogue essay, the exhibition was divided into two "propositions" - A & B - in the two main venues in order to present different aspects of the artists' work and method of working. Thus, even within two very large group shows (80 artists!) I recognised the names of creators at the Arsenale, whose work I had seen the day before at the Giardini.

Though I did not recall seeing Yin Xiuzhen's work the day before, I was drawn to the huge figure in an airplane crash position. The figure and airplane seat made from dyed clothing was compelling. 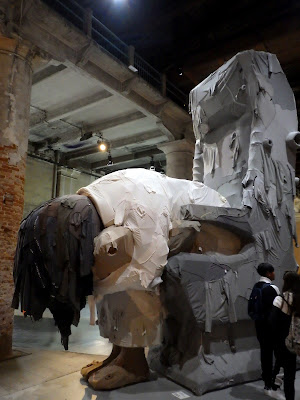 One could examine the sculpture from all sides and get a full, claustrophobic sense by entering it from a small opening at the back. The interior was most alarming as sleeves and pant legs from the clothing hung above and around one at a touchable distance. I had the feeling that these clothes were metonymic, representing actual people, possible victims of air incidents. And further, this could be taken to have the larger meaning, which Laurie Anderson expressed in "From the Air" nearly 40 years ago -- "we're all going down together". Certainly Rugoff, and many artists he has chosen to exhibit, express a great concern for the current state of the world. 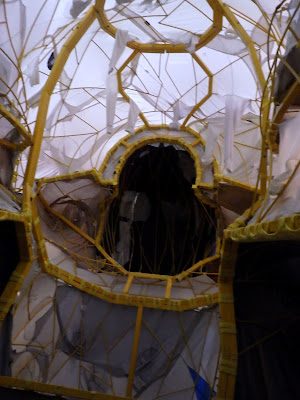 Wandering into the room housing Shilpa Gupta's installation, For, in your tongue, I cannot fit, I was taken by the crowd of viewers/listeners examining each individual section; I quickly joined them. Above each spiked, text page was a microphone speaker. There was something chilling about the voices, the spiked pages and the overall imagery. 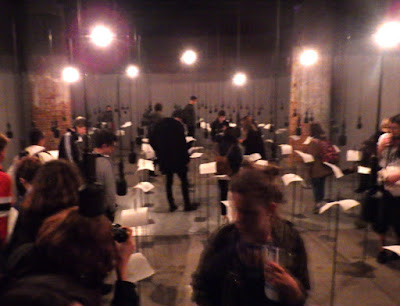 I found out later (I read the didactic before leaving the room) that the pages and the speakers represented the individual voices and words of 100 poets, from the 7th century to the present day, who have been imprisoned for their work or political thought. 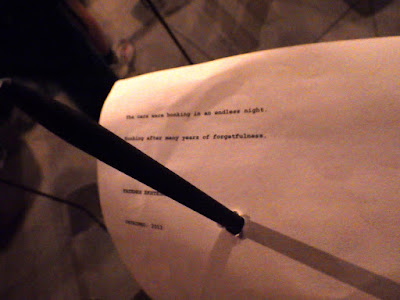 Along with Gupta, as an artist whose work resonated with me and stood out in my memory, as I had remembered her work from the Giardini (the destructive gate), I was also delighted to see more work by Christine & Margaret Wertheim. 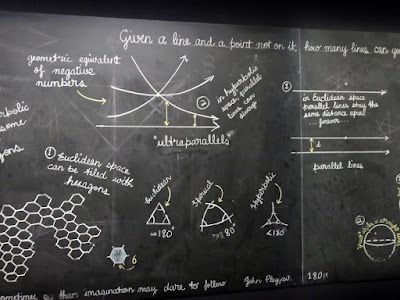 The craft of their crochet work was given a mathematical/philosophical explanation. Through the use of the old-fashioned teaching tool of chalk and blackboard, one started to have a learning experience (and to me this echoed the work of the likes of German avant-garde artist, philosopher, and political thinker, Joseph Beuys and American poetic physicist, Richard Feynman). The Wertheims are in venerable company with their working methods 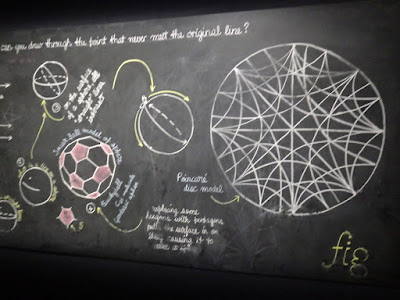 and their work. The ropey spiral of crochet reaches up and up, to great heights of contemplation. 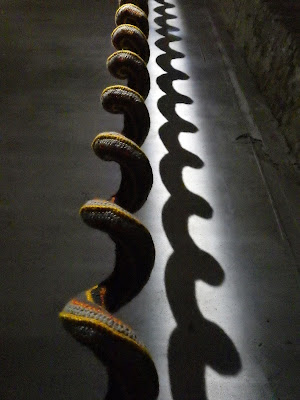 While some work seems to reach to the stars, other work has plumbed the depths. Quite literally. And emotionally. And controversially. Christoph Bȕchel's Barca Nostra is the actual migrant ship that sunk in the Mediterranean, after a botched rescue attempt, causing the deaths of possibly over a thousand people who were locked in the hold. The ghost ship is both a monument and memorial to the victims of human trafficking. It is a deadly reminder that in our world there is no freedom of movement for most. 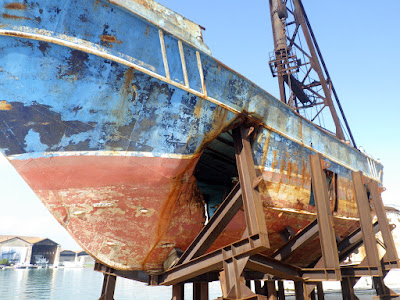 While Barca Nostra most definitely is what it is, Alexandra Bircken's post-apocalyptic installation implies it's appearance: what appears to be hanging bodies or skins of hanging bodies, are latex dippings of cloth. Although the catalogue refers to an upward movement of the figures, their suspension from ladders indicates to me that the movement is downward. Birken's Eskalation provides an image of the end of humanity from a nightmare; Bȕchel's Barca Nostra, perhaps lacking the poetry of  Bircken, provides a fully awake image of the end of humanity. 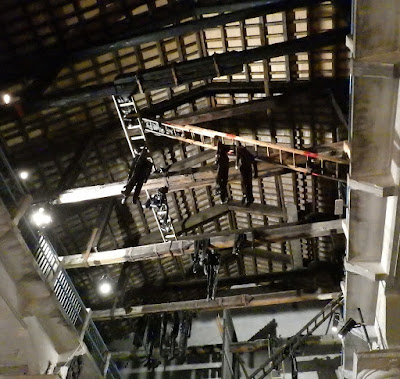 There was so much amazing work in this exhibition, it is quite impossible to discuss in a short blog. This brief glimpse, however, serves to touch on the tip of iceberg and make one realise that there is much to discover at the Venice Biennale. I, for one, plan to return and see future exhibitions. The Biennale is an amazing showcase where one does not have to travel far to be amazed, exhilarated and challenged by current art and ideas.
Posted by Lorraine Whelan at 09:00