In addition to viewing nearly every national pavilion at the Giardini (one was closed and another had queues, so we didn't hang around!) the central pavilion contained Proposition B of the huge group exhibition May You Live in Interesting Times, curated by Ralph Rugoff. Before going to Venice, I had read a number of articles and reviews of the Biennale and one of them gave the information that there was an equal number of female artists included in the exhibition as male artists, and that "unusually" all 80 artists are still living. I kept this little nugget of information in a happy place, and wow! was I impressed by the work! 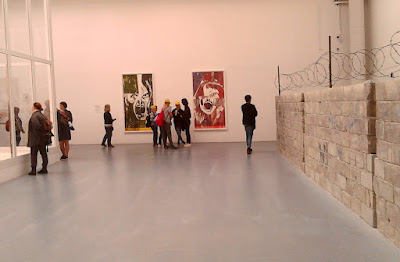 As I have been very focused on printmaking of late, I took an especial interest in the giant manga-esque woodblocks by Christian Marclay. Marclay is an American living and working in the UK. 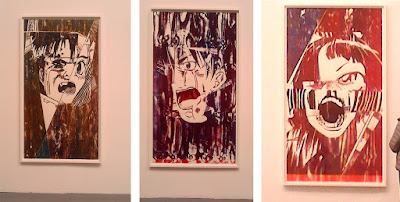 This large gallery also contained Mexican artist Teresa Margolles' wall, Ciudad Juarez, which is part of a real border wall containing bullet holes and its memory as a site for execution. It is a reminder of the reality of a wall amid absurd demands of the current American president to build a complete border wall between Mexico and the US. 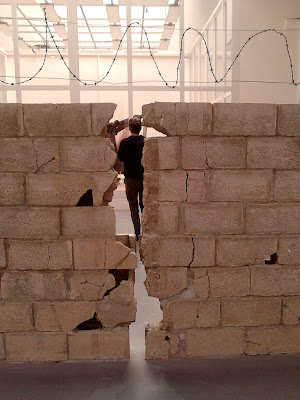 The exhibition contained works in any and all media and within the spacious pavilion, divided into a multitude of galleries, each artwork held its own. There were a number of artists who were painters and it was great to see large and different approaches to painting. I was taken with Julia Mehretu's abstractions. Mehretu was born in Ethiopa but lives in the US. 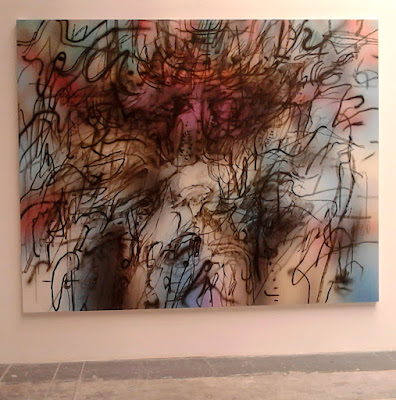 Wandering into a semi-darkened gallery was like walking into a display in an aquarium. Indeed, the individually lit display cases had an aquatic feel about them until, taking a closer look, the "corals", sections of "reef"  revealed themselves as finely crafted, crocheted and beaded soft sculptures by Christine & Margaret Wertheim. In fact the Wertheims have spearheaded an international collaborative project to recreate the beauty of the reefs and highlight the fact of their destruction by pollution and global warming. They are from Australia but live and work in the US. 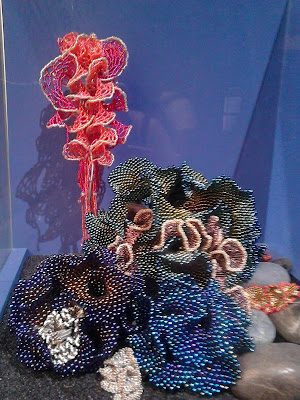 The popularity of destruction was very obvious, as I, along with a small crowd of adults and children alike, were mesmerised by Indian artist Shilpa Gupta's heavy gate slowly swinging back and forth and hitting the wall (fulcrum to the swing) with a noisy clang. The gallery wall shows the havoc caused by the gate and there is a measure of suspense as the viewers await further deterioration. 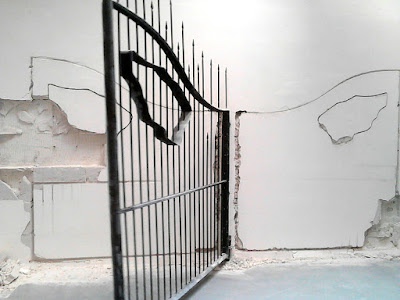 The exhibition was huge, varied, thoughtful and provocative. Rugoff curated an exciting and inclusive exhibition (and this was only half of it - Proposition A was at the Arsenale, which I would have the chance to view the next day and will take a peek at in next week's blog). There were many more artists whose works I found fascinating, but at some point I knew I could not keep taking pictures, rather, I examined and enjoyed without documentation in mind.
Posted by Lorraine Whelan at 08:45