It seems ages away now, but it was less than two weeks ago that I had my big excursion in to Dublin for a "gallery day". I blogged about the first two stops (The Molesworth Gallery and The National Gallery) last week, and you can find that blog here. But the catalyst that got me venturing into Dublin in the first place was desire to see Damien Flood's new exhibition, Tilt, at the RHA. I met Flood (always Damo to me) many years ago when he was a teenager and a friend to several of my nieces. For many years now, he has been quite an accomplished artist and I am always curious to see the development of his work. I was aware of his (relatively) new excursion into ceramic figurative work and wondered how it would fare in juxtaposition with his paintings. 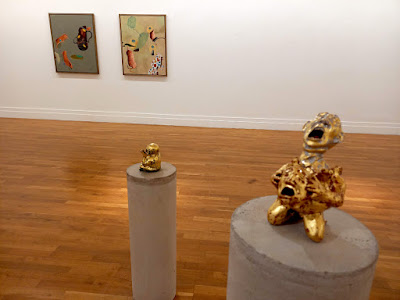 The RHA is a fairly large and open space so the figures can fully inhabit their area grouping but at the same time complement the 2D work. Having chatted with Damo about this exhibition (before it was installed) I knew that he had designed the plinths specifically for each sculpture group. The beautiful, careful, and appropriate plinths extended the ceramic figures giving them height and weight as sculptures. The figures themselves expressed angst and humour simultaneously and the use of gold leaf undeniably spoke of their emotional importance. 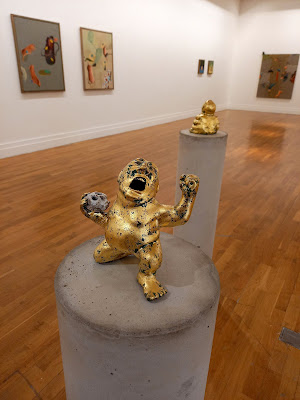 It was most surprising and delightful to see this tiny figure sitting steadfastly on the corner of a painting. 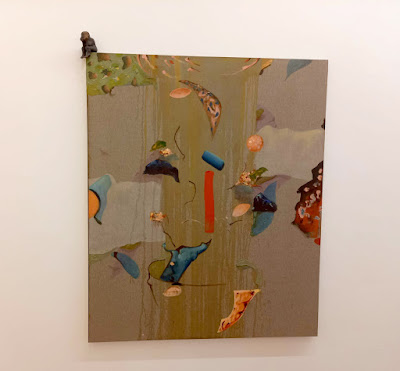 The figure seems resigned or glum in his position. As the only figure in the exibition that is directly situated on a canvas, without the company of other figures and the only 3D figure without added gold leaf, he is very much alone. 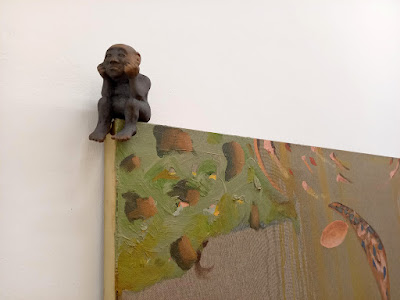 The paintings provide a steady evolution from earlier work. I, for one, am delighted at the lack of the colour brown in the paintings (since I abhor brown) and am glad to see Flood using a more colourful palette than in earlier work. There is a definitely surreal, dream-like quality to the work as images are within a floating world of their own. One is never sure whether it is a specific object or just the paint itself that is being depicted. 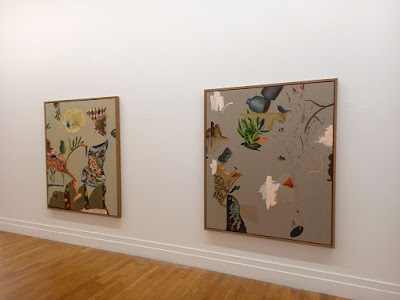 In one corner of the adjacent large gallery, another group of figures beckoned to me, again on beautiful, bespoke plinths. 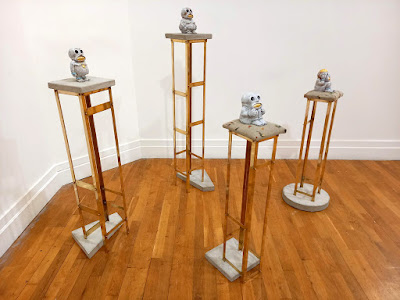 These grinning figures had gold leaf applied to specific areas (brain, teeth) and the crackle glazing was both elegant and spoke of age. Two of the figures were on plinth cushions that related directly to the paintings. The use of gold leaf and cement echoed the figures and plinths in the previous gallery space. 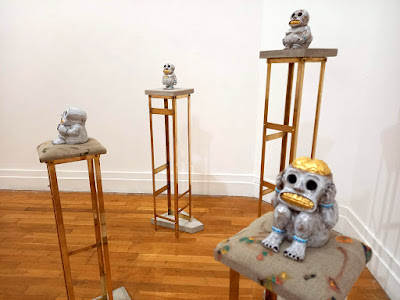 In another corner there were ceramic vessels on their own special plinths, several appearing so precarious that I was beckoned closer just to see how the impossible was possible, but also fearing to go closer... 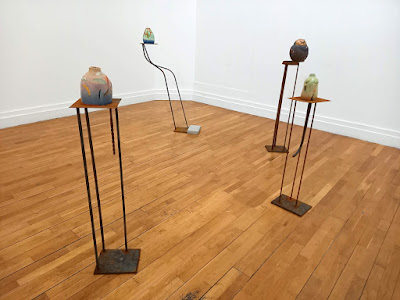 With these vessels I was brought directly to the imagery of the paintings. I could see them as a culmination of the painting and 3D figure work. Flood was able to express a unity in the materials - clay vessels, paint, glazes, rusted plinths - that made the entire exhibition have a satisfying wholeness to it. Where will he go from here? 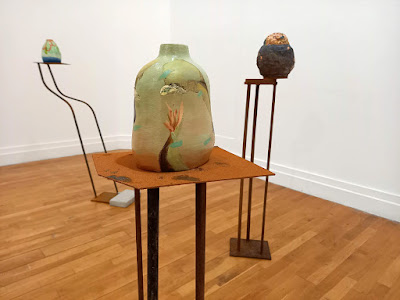 Posted by Lorraine Whelan at 08:52