A couple of weeks ago I heard this loud squawking from a large number of birds. I was indoors, but the sound was cacophonous and I wondered what was going on. On my morning walk I saw that workmen from the Council were on the edge of the estate with some power tools. I thought they were just planning to do the usual trim, which in itself was always an expected disappointment - they had a habit of annually cutting back the blackberry bushes just as the berries were near to ripening. I had grown accustomed to not foraging for blackberries in my own neighbourhood. Usually, however, that culling was done later in the season,. All this bird protest was probably in a justified panic as I imagine nests were being destroyed.

I could never really see the point of trimming the blackberries either: the bushes were on a small green in the neighbourhood which was used for no purpose other than as an entranceway to the park and as an area for a Hallowe'en bonfire. That wilful destruction of bird habitat was taking place was disturbing to say the least.

Then earlier this week the destruction continued as some bureaucrat with too much time on their hands (covid make-work project?) ordered the cutting down of the elderflower trees in this same area. 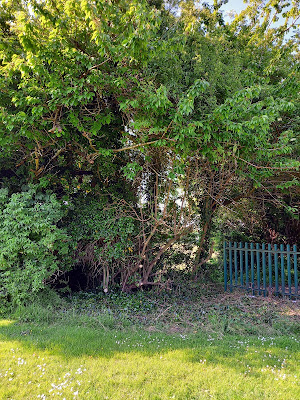 As well as being appalled by this recklessness, I was personally disappointed to see this as a done deed. Every year my husband picks elderflowers in early June and makes a beautiful summer cordial and wonderful wine. He has also made elderberry wine from berries picked in the autumn. Again, this culling took place on the edge of a small green separating the estate from the public park. This is a closer look at the stumps of elderflower trees that were left. 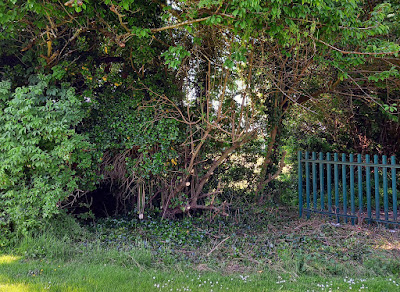 And all the branches and cuttings were simply flung in a big pile on the green. 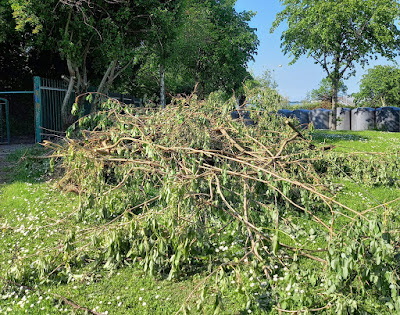 Posted by Lorraine Whelan at 08:51