I blogged last week about anonymously and unexpectedly receiving some of my old work and you can read about that here, because I am now continuing from where I left off.

This print I was very happy to have back, as I do not have any other copies myself, but had never forgotten my work on it. Based on a sketch I did of one of my young nieces asleep, I wanted to recreate that variance in pencil linework and spent many hours of class time in the print room with my zinc plate in an acid bath to create this variance. I remember, in 1981 (my final year at CTS in Toronto) being so pleased that the test print showed the lines as I imagined. 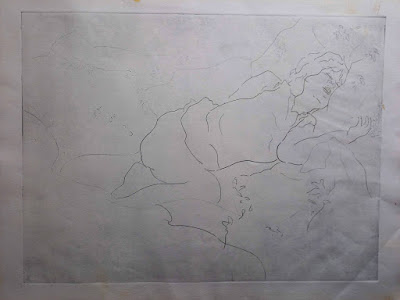 My printmaking teacher convinced me to fill in my minamilist approach with aquatint, which I had never tried before. Although I took a similar attitude with the aquatint - giving it many "baths" in order to have a variance in shadow, I remember being hugely disappointed in the resulting test print. I thought the aquatint overwhelmed the linework. 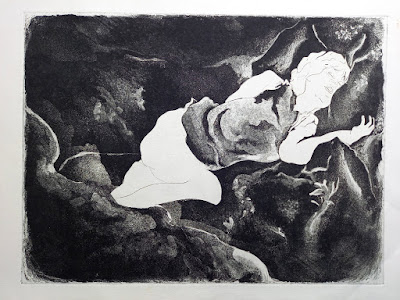 I am not so disappointed now, though, as I think there is a good contrast between the lines and the shadows. I know I only made a very small edition, but since I have no idea of the provenance of the others, I am quite delighted to have one of the final prints in the edition. 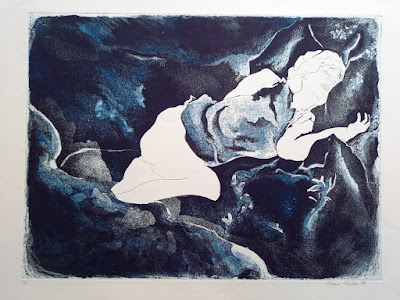 After I finished at the Special Art Programme at CTS, I carried on with my own work as a developing artist. That summer I was very interested in specific flowers as representative of my self. I also made many monoprints, using the backs of zinc etching plates. At this point I do not recall whether these represented red tulips or rosebuds... 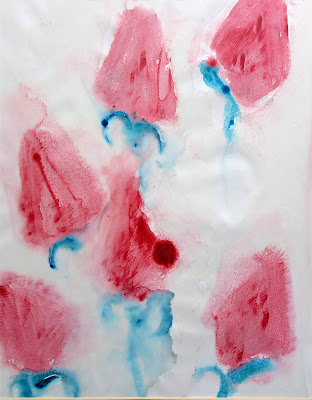 In the fall of 1981 I started working as a temp in an office in downtown Toronto. Because the employer had a policy that encouraged "staggered hours", I ended up starting work by 7.30 am so that I could go home in the afternoon before rush hour. As winter wore on I found myself at my desk watching the sun rise through the office blinds. I found this broken cityscape view quite inspiring and later did quite a number of sketches of it. I only finally did a large painting in 2015, Fractured City, which was inspred by this time and the sketches I did back then. 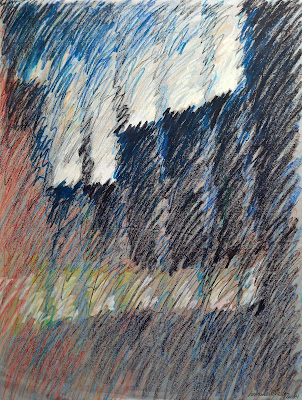 I was surprised to see this slightly later work in the Anonymous Archive. Still from the 80s, I did this mixed media piece as part of a series that ended up being exhibited in Winters Gallery at York University (while I was in my final year there in 1986) and then at Charyk Gallery in Downsview. At the time I was very interested in metonymy, visually as well as verbally, where part of the whole represented the whole. In the case of this series, the hand represented the body. 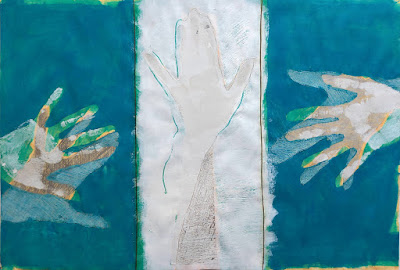 Posted by Lorraine Whelan at 10:30