The last Saturday in August saw me head to Clare for the Furnace Festival at Caherconnell Fort. It was a hot summery day for watchers, but especially hot for the iron smelters and blacksmiths!

As a specific experiment was being tested, all the furnaces were of the same type and generally the same proportions, but the smelters individualised there furnaces with kaolin designs, such as the Sheela-na-gig design on the foreground furnace. The smelters were particularly happy with the quantity and quality of ore smelted from the midland bogs. 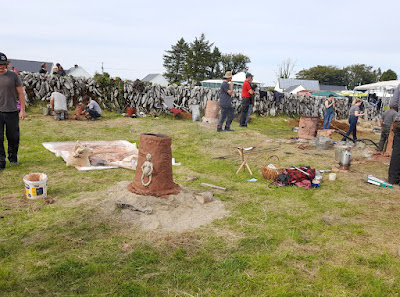 The site of Caherconnell Fort gave the blacksmiths the specific project of reproducing some of the archaelogical finds from there (an iron belt buckle, arrow heads and a sickle). Caherconnell is a stone fort, of the kind found in abundance in the West, though I was disappointed in the contemporary interferences (numbers corresponding to a self-guided tour booklet, ropes blocking off areas, etc), which I thought marred the site and lowered this fort in my esteem when compared to other stone forts that I have come across, especially when I lived in Kerry. (So I was hardpressed to take a photo of the fort.) 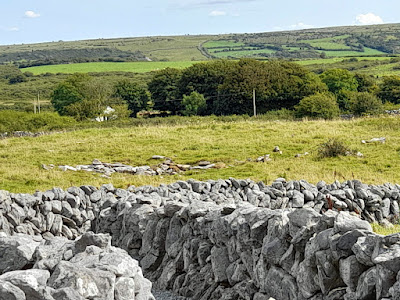 A drive through The Burren always makes me think of what it must be like on the moon. Except the land is NOT barren, it can only be described as unique. 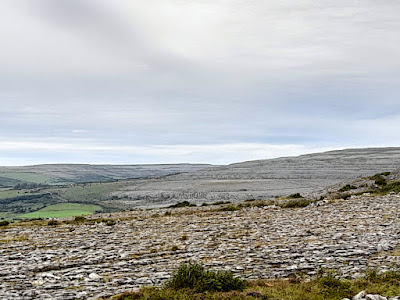 The Burren is an area of exposed limestone, with very little topsoil, but the "grykes" - the fissure area between "clints" (flat, exposed rocky areas) - protect soil and allow plants to grow as well as small wildlife (I have seen an abundance of frogs there in the spring). For further information on The Burren check out the national park website here. 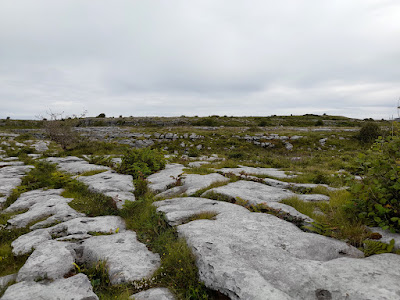 Of course, a visit to The Burren necessates a visit to the iconic Poulnabrone Dolmen. Lucky for me I had a chance to walk around it before the FIVE tour buses unloaded their curious cargo! 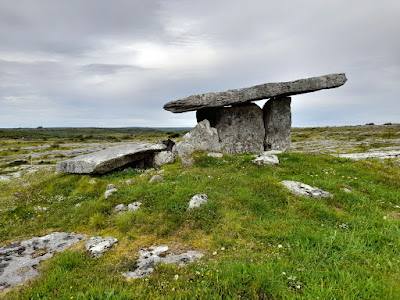 Posted by Lorraine Whelan at 10:08