Chinese New Year is this Sunday, January 22 and, as usual, we will celebrate on the Saturday night with a big feast of Chinese food. Quite a long time ago (last century!), I bought a Chinese cookbook and tried quite a few of the recipes. We always start our meal with a Phoenix Tail salad (a display of raw vegetables and egg slices arranged to resemble the extraordinary tail of this mythical bird) and sesame soy dip. I have given details of how to make this dip and arrange the salad on a previous blog, here. I also make Szechuan cucumbers annually to accompany this meal and give the recipe here. This year my husband put up all the decorations so things were in different places than previous years -- I liked the new configurations of decoration! The glass bricks that separate the kitchen from the entrance hallway are a great place to put things. Of course, there are also decorations on the door. 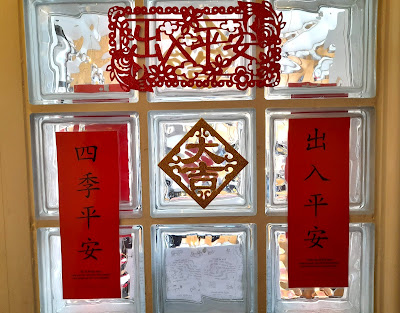 It is Year of the Rabbit this year (or Year of the Yin Rabbit, also known as Water Rabbit). For further information on Chinese New Year check out the Wikipedia page here. 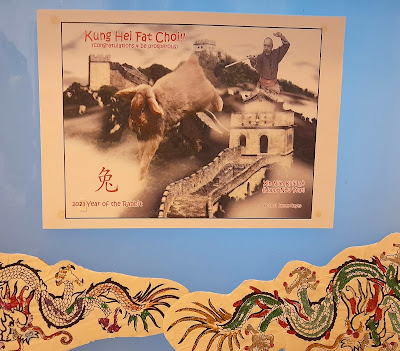 Each year I make a simple drawing to cover up the original image on this elaborate decoration (it is originally from 2007 I think). In a previous blog I have shown a Year of the Pig cover up, but I also posted a picture of the full decoration. The decoration has always hung on the kitchen door, but this year it hangs on the living room door so can be seen when one first enters the house, as that door is directly opposite the front entrance door. 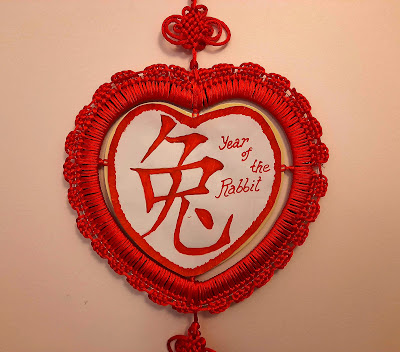 The kitchen side of the glass bricks is also decorated and the LED lights will be switched on during our feast. 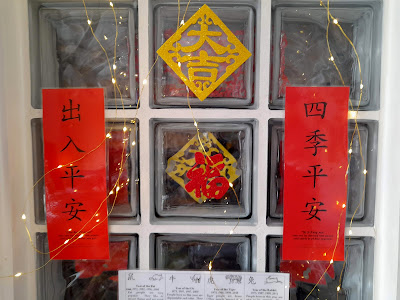 I have been asked many times why I celebrate Chinese New Year, since I have no particular Chinese connection. However, I used to live near Chinatown in Toronto and always enjoyed the celebratory atmosphere in the darkness of winter, late Jan or early Feb. When I moved to Ireland, I decided to continue this celebratory appropriation. It is an excuse to celebrate with good food and honour another culture. We decorate the house, and adhere to certain rituals of cleaning and luck. For further information on simple greetings that are easy to learn look here. Kung hei fat choi!
Posted by Lorraine Whelan at 09:42