A few months ago I decided to go through a number of portfolios that were in storage on the rooftop section of the attic (the other side of the wall from my studio). I blogged about opening the portfolios and finding things here and wrote about some of the early works here.

Going back a little bit further even, I was pleasantly surprised to see that I had held on to a few prints from CTS art school in Toronto. I think Blue Egg, an undated silkscreen print measuring 70 cm x 59 cm in an edition of 10 (this print is 10/10) is from late 1980 when I was in my third and final year. 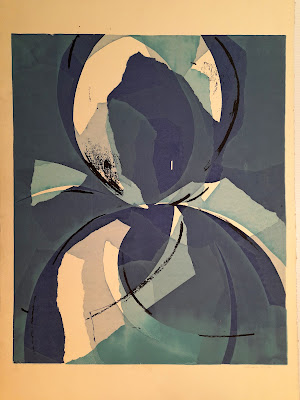 Also from my final year at CTS, though early the following year (1981) is an untitled etching. I did a test print of the linework before I added the aquatint. 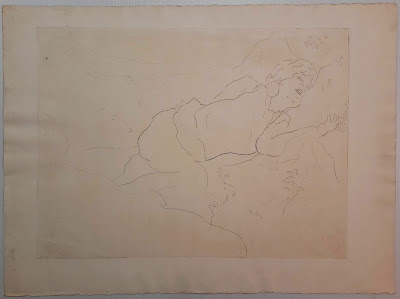 I remembered being teased mercilessly at the time by my friends/fellow art students for always painting and drawing sleeping subjects! 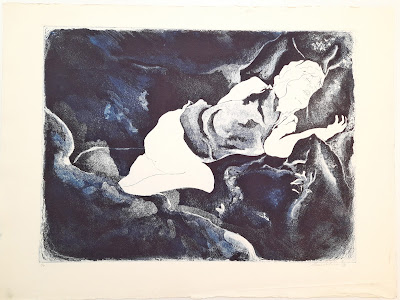 Although I did not pursue printmaking again till decades after art school, for awhile I enjoyed making monoprints - simply painting on the back of zinc plates and pressing them to paper with a wooden spoon as I didn't have access to a press. That summer of 1981 I became obsessed with tulips and I remember creating a series of monoprints of them in the basement of my parent’s house in the wee hours of the morning listening to an old record of Cream on a 1970s space-style Panasonic stereo. I loved the song Deserted Cities of the Heart, both the lyrics and Ginger Baker’s drumming. As I used the same zinc plate, the untitled works were all 38 cm x 28 cm. My good friend and cousin was visiting Toronto that summer and I gave her two from this series to take home with her – they are framed and on her wall in London to this day. Only those two, this one and one other from this series still exist. 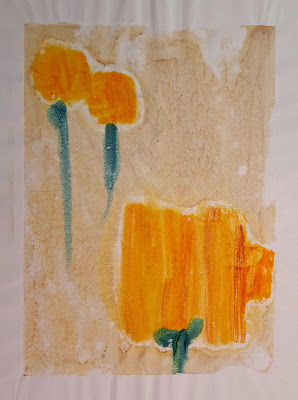 By time winter came along that year, my tulips became stemless and were more abstract. I remember creating this piece while minding a sister’s apt in downtown Toronto. It began as an oil pastel drawing within a matte frame and then I painted the surface with turpentine, so I am not sure how to categorize it (painting or drawing?). Untitled, 40 cm x 23 cm. 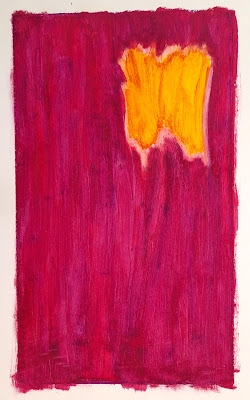 Posted by Lorraine Whelan at 11:39