A few weeks ago I was sorting and culling from several large boxes of correspondence and found a number of things that didn't actually belong with correspondence, rather they could be more appropriately part of my personal art archive. I already blogged about an envelope filled with torn pages from a number of notebooks here. But I found a number of other things in the boxes. This sketch was one I did on my second art school class trip to New York City in 1981. I had been with my friends at The Lizard Lounge that night and for some reason left on my own. I remember running across Times Square to The Picadilly Hotel, where we were staying. At the front desk I asked for the key to the lads' room by mistake and didn't realise it until I got into the room and noticed that the bathtub was full of cans of beer. Rather than return the key to the lobby, I decided to wait for everyone to come back. I found some hotel stationary, a pen, and did this drawing. 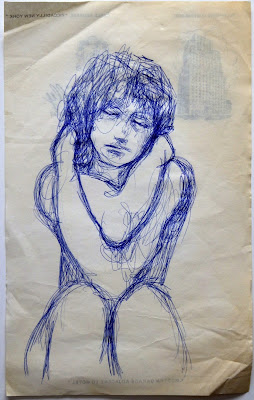 In 1983, in an attempt to extricate myself from an abusive relationship, I began dating someone else. However, I was followed everywhere I went and decided to make a series of artworks from the experience. I planned to call the series "Evidence" but did not get much further in the project than making this small stencilled card. 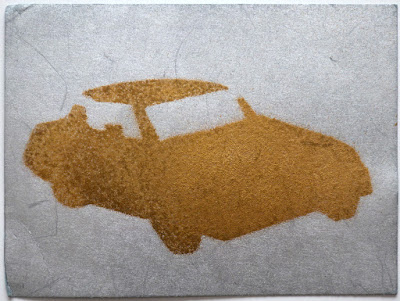 I made this postcard in 1986 or 1987 specifically so that it would be returned to me. It was sent to one of my former university professors, along with a letter, asking for a reference. The images are based on The Tidal Series of paintings and drawings that I was doing at the time and I made response as easy as possible by providing a series of boxes to be ticked on the postage paid card. My sense of humour showed by my inclusion of the box "I don't remember who you are" - just in case! The card, however, was happily returned to me with a positive response and phone number.

I was talking to one of my cousins about my recent organising and culling, and she reminded me of a piece of work I had given her when she visited Toronto in 1981. It was delightful when she sent me some photos of the piece, the colours as fresh as the day they were painted. 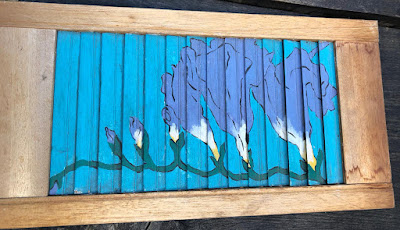 At the time I had been greatly inspired by an exhibition I had seen in New York of Eileen Gray's work. I had painted my own chest of drawers so this was the second piece of "furniture" that I decided to paint. Many years later I painted a full set furniture for my child's room. I blogged about that furniture and the piece that started it all here. 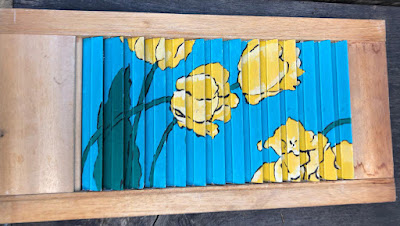 Posted by Lorraine Whelan at 09:57