While in Ottawa at the end of July, my sister-in-law drove me to nearby Gatineau (PQ) to have a look at “Le Sentier Culturel”, i.e. The Cultural Trail. The artworks were mapped around the centre of the town and one simply had to walk around to have a look at the outdoor work. It was a lovely day – a bit overcast and not as hot as other days, so it was perfect for walking about. At most spots on the trail, there was a little display box of brochures that gave information about each stop along the way. Although I had looked at the website the night before, it was handy to have the brochure with me as I walked through the streets. 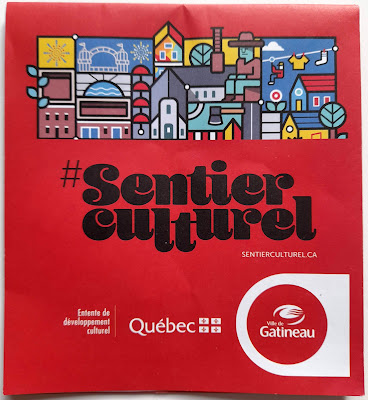 After parking the car, the first work we came across was number 8 on the list, Bordalo II's One man's trash is another man's treasure. This huge and colourful wall sculpture - if it was on a smaller scale I might have called it a collage! - was made entirely from repurposed garbage. 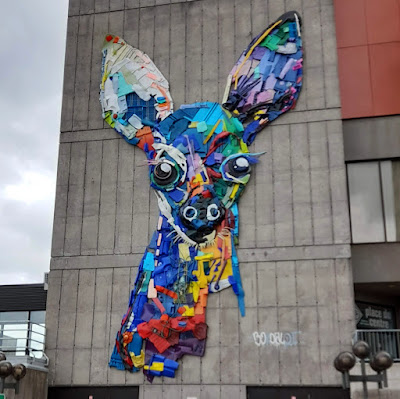 Across the road from this sculpture was a civic square and several works on the trail were found here. The colourful entrance to the square was NOT part of the trail but is an indication of the vibrant sensibility of Gatineau. Please note that the appearance of a deserted city is due to this being a business area and not only was it Saturday, but it was a long weekend when I visited! 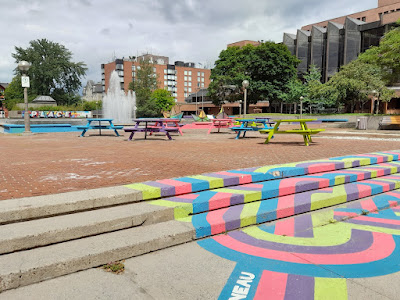 This playful mural on the side of one of the buildings was also not part of the trail, just another indication of Gatineau's sensibility. 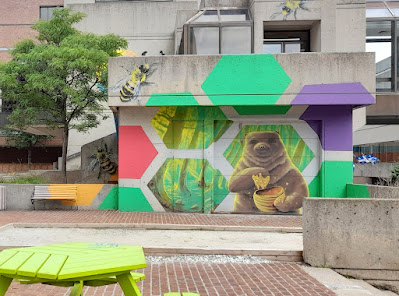 I was delighted to see this work in the flesh - from one of the pictures on the website, I had already picked Mathieu Fecteau's sculpture of boats as my favourite work on the trail. Je t'appelerai bateau-feu bateau-lumière (the title - I shall call you fireboat lightboat) was excerpted from a 2018 poem by Agnès Riverin. 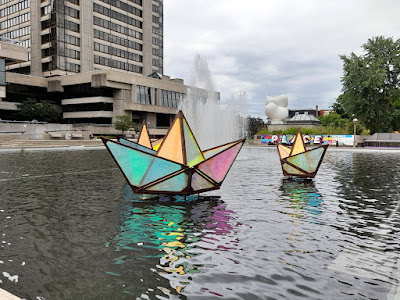 I love the way the sculpture references paper boats from childhood and I love them appearing as if stained glass. I also loved the way the bright colours of the boats reflected in the glass of surrounding buildings and in the rippling water of the fountain pool. 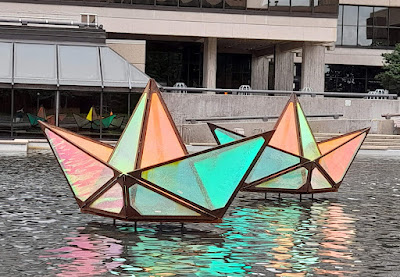 I am not sure of the materials used - being in the middle of a fountain, I could not get a close-up look! 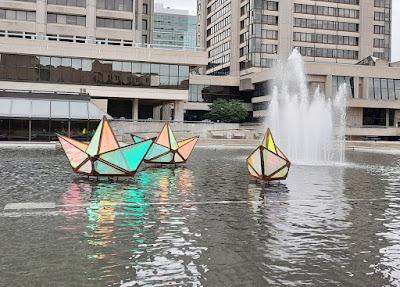 From a distance I could see what looked like a pair of binoculars, but it was the sculptural element of a sound piece that was unfortunately broken on my visit. The large white bone-like sculpture was an artwork that was not part of the cultural trail. When I got a closer view of it the white did not seem so luminous. In fact, this work from the 1970s was in need of a bit of TLC as the paint was peeling and it looked like a few repair jobs had been haphazardly carried out over its lifetime. 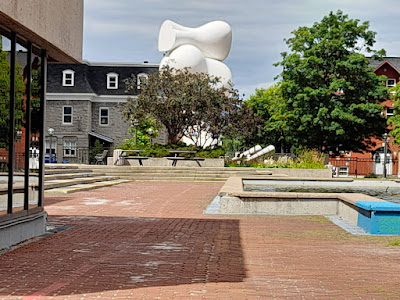 I was curious about this bright little pavilion, but did not see a reference to its maker/designer in the brochure. 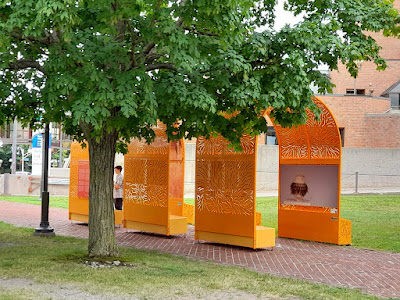 The brochure describes Espace sensible as a series of exhibitions commissioned by Artch, an organisation that is specifically interested in the work of emerging curators and artists. 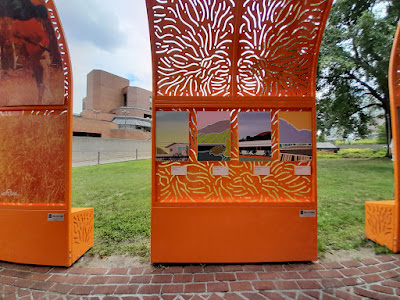 While I was there, there was work by several artists but there was no indication of how long this work would be available for viewing or what the next exhibit would be. 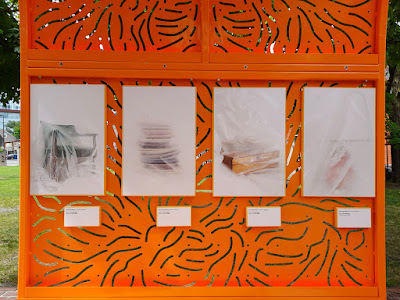 I was most curious about the pavilion itself, rather than the work displayed within it. 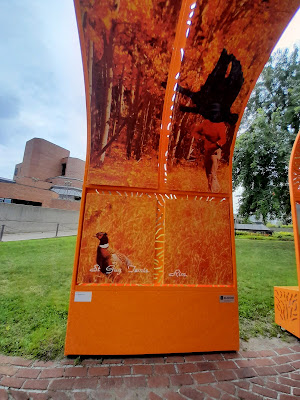 In any case, it was great to be able to walk around and enjoy the outdoor works. There is more to come, as I took lots of photos, so this will be my topic for the next few weeks (two more blog posts)

Posted by Lorraine Whelan at 11:08